orgive me readers, for I have sinned: I did not attend a Magic 2013 Prerelease event.

I heard awesome things happening. I saw the tweets flying and Facebook posts popping. Going to a Prerelease is definitely one of the experiences I look forward to, and we get to do it four times a year.

While I have no reservations about telling you to go check in at Steve Sadin's article for that Prerelease punch—I know personally he's quite the awesome guy—we do have a problem of handling ours today. So let's go deep. And legendary. And ninety-nine cards tall. 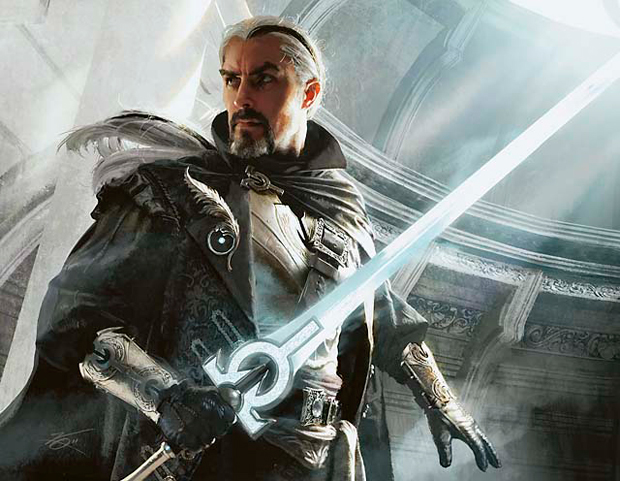 Since I'm definitely a self-proclaimed Commander fanatic I'm a little jealous of everyone and their shiny new wares this week. I'll get my chance at Magic 2013 glory this Friday, but until then I can only scheme, plot, and brew.

Each of the new Magic 2013 Intro Packs brings a premium foil version of a legendary creature. From Talrand, Sky Summoner to Krenko, Mob Boss, one can pick up a pack and instantly have a cool version of an eligible Commander. When I previewed Talrand I had no idea each of the decks was going to be packed with such awesome. Now that I do it's time to play catch up.

I have three more Commander decks, each its own color and unique among each other. If you're curious to see what's possible with the new kids on the Commander block, here's your chance to find out.

The Brave and the Bold

I noted before that I like the cut of his jib, but going full ninety-nine cards on him takes a little finesse. Losing multiples means your army transforms from an organized unit with redundancy into a motley crew of specialists, each with their own agenda. It's like an action movie with every action star ever, at least in white.

Attacking with Odric, when sufficiently supported, makes combat easy-mode. No fears of fatties will stop his troops from his command. No walls will hold them back. He only needs enough troops to make it happen. While he doesn't require Soldiers to build an army, having lots of helpful cross-pollination between other Soldier types is certainly helpful.

We have Soldiers and their lords, as well as general instant-army cards. It shouldn't be an issue to get Odric up and running. What I wanted to make sure was that we had the full army experience. Tacticians plan out their moves carefully—no Lightning Greaves or Swiftfoot Boots—but in turn carry much better results—Basilisk Collar, Gorgon Flail, Sword of Kaldra, and Umezawa's Jitte are particularly dangerous with Odric's ability.

A good tactician can lead. A great tactician can ensure victory regardless of his presence. Layering in big boosts for most of our instant army as well as the new Sublime Archangel (for when one attacker is all that's permitted or sensible) gives us more choices than just swarming.

The final list rounds out the usual Commander suspects with a few anti-land lands, some ways to draw extra cards, and plenty of ways to hit more mana.


Controlling the battlefield is a theme through even the lands and support spells. And for the truly curious, Forbidding Watchtoweris a Soldier. Enjoy surprising your opponents with that fact.

Odric isn't the only new hero interested in attacking. The champion of black in Magic 2013 is Nefarox, Overlord of Grixis. Grixis, for the unfamiliar, is the formerly separated shard of the plane of Alara where there was no white or green mana. Death, decay, and doom were the only absolutes. 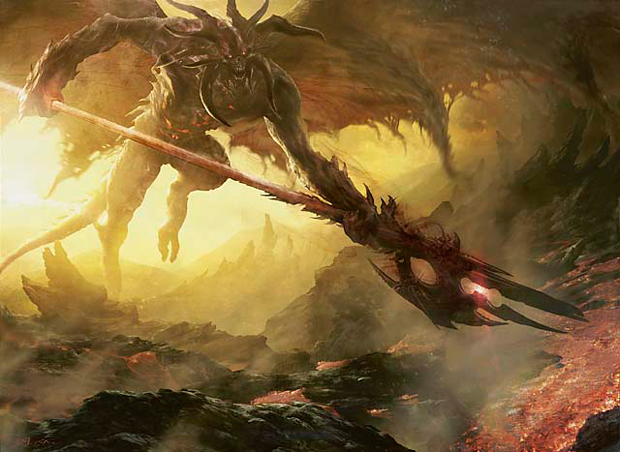 Nefarox is certainly a Demon worthy of ruling such an inhospitable place. He's so strong alone that simply moving to attack crushes those who oppose him. His power isn't like Odric's at all, but it can do wonders to control the battlefield in a different way.

When you slaughter those in your way, and bring unholy resurrection to the most powerful slain, it's little wonder that life on Grixis gives birth to fiends like Nefarox. And when he leads he ensures only those he chooses to use remain standing.

For Doctor Who fans out there, just pretend those from Grixis are Daleks. For everyone else, tough. Go watch Doctor Who until you understand what "Destroy! Destroy!" means.

If you can't kill it with these cards the odds are good the time of Grixis is at an end. Fortunately, everything you can kill is probably fair game to bring back through any of the assorted recursion spells. We're not going for highbrow or tactical here. Just kill everything that moves and looks dangerous, and pick it up as needed for your own purposes. The full list shows more details around making this work.


You will find the common Urborg, Tomb of Yawgmoth-Cabal Coffers combo here, but don't underestimate the rest. While I don't like to use them myself, an array of cards that find exactly the other cards you want is included here. Demons don't play nice, after all.

Between the tutors and mana engine to make it work, keeping the battlefield empty of opposing forces is elementary. To help our ability to hit when the coast is clear we've included a few "man lands" to wake up when the dust settles.

And, of course, Nefarox is just fine at keeping the enemy down if they can only serve up one creature per turn. It's how Grimgrin, Corpse-Born has nailed me a few times, so I'm assuming the same trick will hold here. I'll also accept CONFIRM/DENY reports from the field for the accuracy of that assumption. 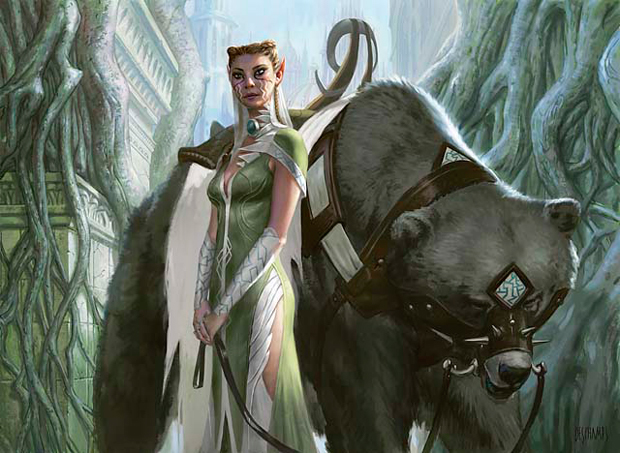 Right. I mean we'll do more than just look. She's a strong Elf with plenty of power hidden behind her serene stare. While the other two options from Magic 2013 are direct, sincere, and obvious in what they want, Yeva is a bit more suggestive. It's less about satisfying some requirements she lays out than carefully choosing how you want to make the most of her ability.

Anyone who's played with blue long enough knows the power of creatures with flash. Yeva makes entire decks of fatties move with the speed of now. As her Forcemage suggests, dropping dudes whenever you choose makes for some very difficult decisions for opponents. It makes it easy to wait and see what happens. It makes it possible to cast an entire hand of things at the end of a turn, then immediately get to untap and attack.

Yeva is bringing the heat from almost two decades of green Magic.

Yeva will quickly become the scorn of your opponents. But since she herself can come down on a whim it stands to reason opponents won't have many chances to get rid of her before she does her thing. Whether it's suddenly speeding out a slew of lands (or getting them to untap every turn) or air-dropping absurd fatties onto the battlefield, her grace and power will let us dance through the warzone.

Without Yeva around we can rely on more tried-and-true options for get the creatures we want, and making tons of mana will turn our token makers into alternate-win armies. What's featured above is just the heart of a powerful offensive for green. There's a little more to battle with Yeva than this.


When we're running forty-six creatures, Lurking Predators bares a big, toothy grin (like it's controller). Some more familiar faces of green can be found: Acidic Slime, Indrik Stomphowler, and more all act as warm bodies and as the spells to break up others' artifacts and enchantments. Brittle Effigy and Duplicant are honorary green removal spells, even if neither are a combo with Yeva.

Speaking of combos, since Yeva lets us cast creature spells at any time, Mind's Eye actually has a suitable home! While it's always a powerful card in multiplayer, drawing a few creatures to cast off of the extra mana we'll have makes perfect sense. Winding Canyons lets us play Yeva's game even without her on the battlefield.

Cream of the Crop will let us set up, or change, our next draw based on what we see happening. And Garruk, Primal Hunter promises many cards when we can sneak our creatures in at the end of the turn before ours.

An Offer You Can't Refuse

The astute among you might have noticed something: there is no deck here for Krenko, Mob Boss. We'll come back to him in a moment. First: last week's poll results:

Since there is no possible way that the mighty and honorable Nicol Bolas could have fixed these results, it stands to reason that the most ancient and powerful of Planeswalkers is, indeed, more powerful than everything else in the set.

If this challenge doesn't excite you, that's fine. For those who have been waiting to unleash fury with Mountains, I await your submission.

Join us next week when things get a little wacky. See you then!