ome cards just scream "multiplayer." Or, well, "MULTIPLAYER!" You know what I mean.

There are lots of different ways for a card to do that—power, resilience, reusability, mass destruction—but by far my favorites are the ones that include the phrase "each player" (or its close cousin, "each opponent").

Cards like Sizzle and Unnerve (or their fat-bodied upgrades, Sphinx Sovereign and Myojin of Night's Reach) do something nasty to "each opponent." In a duel, great—"each opponent" is just a "target opponent" that can get around Ivory Mask. In multiplayer, though, these cards take on a whole new dimension, scaling up to punish as many opponents as you can fit at a table. 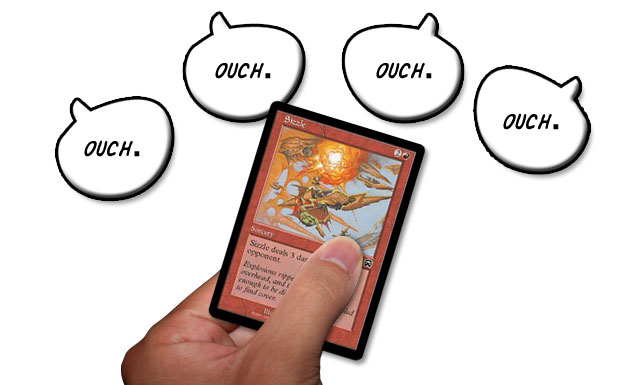 Other cards, such as Murkfiend Liege, Rhystic Study, Verdant Force, and Multani, Maro Sorcerer, get better and better for you the more people there are at the table. I love 'em; it's fun to see just how ridiculous they can get.

Even better, there are cards such as Agent of Masks, Syphon Mind, Blatant Thievery, and the elephant in the room, Kokusho, the Evening Star that not only punish each opponent, but reward you proportionally. They're a crossbreed between the innocent joy of pumping up a Taurean Mauler and the sheer hateful appeal of pinging everyone with Faerie Tauntings, again.

Today's preview card does a little of both. And like all my favorite cards, sure, it'll smash a little face. But it also does something else ... something we've never seen before. 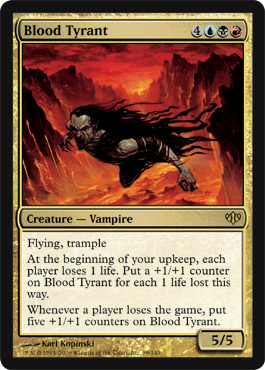 Let's break this down. It's a 5/5 with flying and trample (flample!). That's cool. I like that. And it has this ability sort of like Rumbling Slum's, which is great for moving the game along (and unlike Rumbling Slum, it's not damage, so it can't be prevented). Throw in a little life gain of your own—such as Syphon Soul, or Planar Chaos's Vampiric Link—and watch the life totals grind slowly down.

On top of that, it gets bigger when it does its Rumbling Slum thing. So it's not really a 5/5 flampler—it's a 7/7 at bare minimum, more like 9/9 or 10/10 at some tables, with an extra ping for everyone thrown in. Sweet! 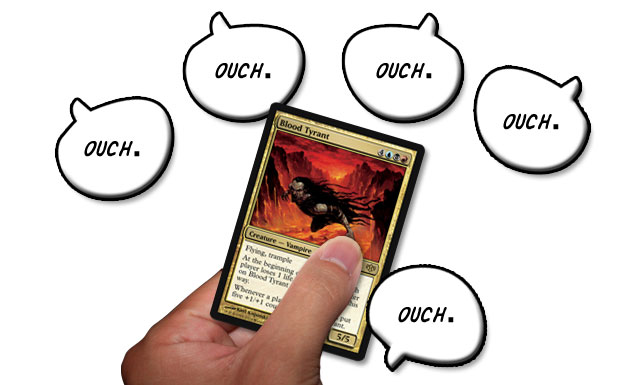 And it's got this third ability too. Let's see here ... Whenever a player loses the game—

That, ladies and gents, is a hell of a trigger.

Whenever a player loses the game, this behemoth gets even bigger. And with trample and flying, unlike multiplayer favorites Taurean Mauler or Hamletback Goliath, it'll consistently get through for damage.

I have a friend at Wizards of the Coast—I'll withhold his name—who really dislikes that second triggered ability on Blood Tyrant. He understands fully that it's lots of fun in multiplayer, but he told me that he doesn't like seeing a clause on a card that "does absolutely nothing" in a two-player game.

I quickly pointed out that this isn't the first time there's been a clause like that. Imperial Mask is the only black-bordered Magic card that uses the word "teammate" (along with the bizarre restriction "if it's not a token"), but that's from Future Sight, a set that purposefully included many lines of text that had never before appeared on cards (Spellweaver Volute?!).

More recently, Shards of Alara had Titanic Ultimatum, which grants lifelink to your creatures prior to what will almost always be a lethal attack. As I said when I previewed it, the life gain will virtually never be relevant in a two-player game (but will always be awesome). Shards also has Feral Hydra, which has an "any player may play this ability" clause on an ability that's almost always strictly beneficial for the creature's controller. There are only a handful of situations when it makes sense for your opponent in a duel to put +1/+1 counters on Feral Hydra. They could be preparing to kill it with Weed Strangle, I guess, but in practical terms, I wouldn't ever expect a lone opponent to play that ability. Rather, it's there for you, your Two-Headed Giant partner, your Star ally, and perhaps an opponent in Free-for-All who would really like to see your Feral Hydra push through for those last few points of damage against the smart aleck with the Door to Nothingness.

My friend countered that all the abilities I just mentioned still do something in a two-player game. You can still make Feral Hydra bigger. You're still protected by Imperial Mask. Titanic Ultimatum still turns every single one of your creatures into a gigantic, first-striking trampler. That second ability on Blood Tyrant doesn't do anything at all!

I counter-countered that Blood Tyrant is still effectively a 7/7-and-growing flying trampler in a duel, so it really isn't any different from Titanic Ultimatum. He told me he still didn't like it, and I told him he was stupid, and now he and I don't get to sit in the same row of cubicles anymore. (Kidding!)

In the end, though, we were able to agree on one important point: after winning a two-player game with Blood Tyrant in play, you should definitely pile on those five extra +1/+1 counters. Not to brag, of course. Just ... to enjoy the fruits of your vampiric labors for a few moments before shuffling up for another round. I'm sure you understand.

The More the Merrier

Let me be completely clear: Like Titanic Ultimatum, Blood Tyrant is great in a two-player game. I will play it in Limited. I will put it in my Grixis deck. I will unnecessarily add counters to it after the game is, technically, over. It's a huge, scary, must-answer fatty that puts your opponent on a very short clock.

All that said, this is unmistakably a multiplayer card, and it's in multiplayer where it's really going to shine.

Last week's preview card, Meglonoth, is a card that tells the other players in a multiplayer game not to mess with you. Blood Tyrant is almost exactly the opposite: if your opponents don't kill it or kill you in very short order, they're going to get uncomfortably well-acquainted with an enormous beatstick. And even though you can only point your one-vampire air force at one opponent a turn (generally), everybody loses that 1 point of life each upkeep.

As such, you should fully expect your freshly played Blood Tyrant to be met with a chorus groans, curses, and exclamations, not to mention Unmakes, Shivan Meteors, and Counterspells. Nobody at a Free-for-All table wants to see this thing survive to see your next turn, and even in formats like Star or Attack Left or Right, where not everyone is at immediate risk of being attacked by Blood Tyrant, anybody who's low on life won't look on it kindly, even if they're technically your "ally" in Star or across the table from you in Attack Left. 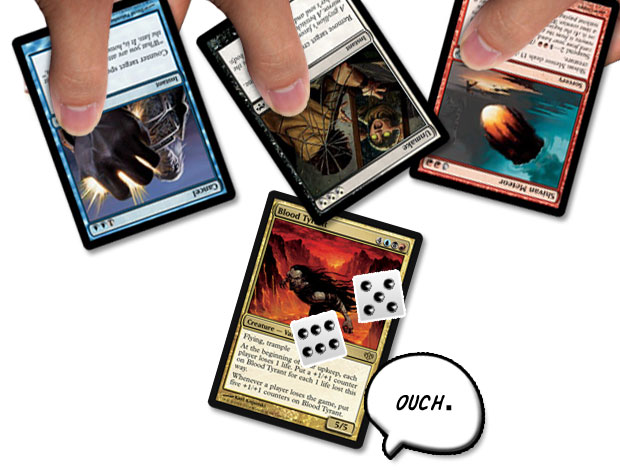 That, in turn, suggests that you may want to have some way of protecting Blood Tyrant. If you're worried about someone countering it on the way down, you might wish to have cheap backup ready in the form of Vexing Shusher or Guttural Response, or, since you're also playing blue, something like Flash Counter, Odds, or Pact of Negation.

Once it's on the table, Blood Tyrant is likely to be a high-priority target for anybody who's packing removal. The first solution for this problem that comes to mind for me is, much like last week, a Shadowmoor God Aura: Clout of the Dominus. The blue-red Aura gives Blood Tyrant haste and shroud, so if your opponents don't kill it at instant speed in response, it's going to get at least one hit in, and it'll be immune from spot removal. Not bad, not bad. The other matching God Auras are also pretty exciting—Helm of the Ghastlord plays nicely with trample and flying, and Fists of the Demigod never hurts (well, never hurts you, anyway).

Turn to Mist can protect Blood Tyrant from removal once, and if you have a little more mana, you can use Protective Bubble, which gives your Tyrant shroud like Clout of the Dominus and, oh yeah, makes it unblockable too.

On the other hand, you're playing black, so you may not even care if Blood Tyrant gets countered or destroyed. With cards like Zombify and Torrent of Souls, you can bring your vampire back from the grave for a second (or, if you discarded it, first) run at the table.

So you've protected your Blood Tyrant. Or you've just run it out there to see what happens. That's fine too. How do you make the absolute most of the monster you've created?

Of course, you don't even have to be involved at all; slam down Blood Tyrant right after somebody else makes some "stop me or die" play, and everyone else's attempts to stay alive will play right into your hands. You could even, with help from Teferi, Mage of Zhalfir or Vedalken Orrery, play Blood Tyrant as though it had flash and run it out unexpectedly right before someone dies. 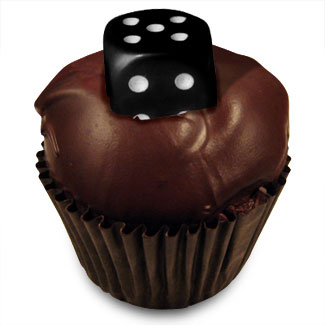 But really, I'm getting ahead of myself. As awesome as Blood Tyrant's second ability is, it's not actually the core of the card. It's the icing on the cake—an added bonus. The cake, in this case, is a 5/5 with flying and trample, which I guess leaves that first ability as some kind of filling. Ganache, maybe?

That first ability is the one that will make everybody sit up and take notice. Having seen Bitterblossom, Underworld Dreams, even the lowly Faerie Tauntings completely change the face of a multiplayer game, I can attest that 1 life a turn can really add up. When that 1 life a turn is also covering your airborne menace in a pile of counters, even better.

The life loss from Blood Tyrant is symmetrical, though, so that 1 life each turn is adding up on your balance sheet as well as everybody else's. You have something they don't—see the previous comment about an airborne menace covered in counters—but still, you could easily start feeling the crunch. The last thing you want to do is posthumously put five counters on Blood Tyrant to commemorate your own untimely brush with mortality, especially if that last point comes from Blood Tyrant itself. How to protect yourself?

That first ability causes life loss, not damage, which means it can't be prevented, so we can't go that route. Instead, we have two basic options: gain some life to offset it, or just win first.

For life gain, you have any of black's classic "drain" options. Drain Life / Consume Spirit, Corrupt, and Tendrils of Corruption can all do the job if you're heavy on black mana / Swamps; Elsewhere Flask and Urborg, Tomb of Yawgmoth can help if you're not. Cards like Deathgreeter, the underplayed Ribbons of Night, and the aforementioned (and thematically appropriate) Vampiric Link are also good sources of life gain in black, and Augury Adept is a Shadowmoor color pie bleed you can play if you're more heavily in blue.

Winning first is a little trickier. I like the idea of packing a deck full of cards that chip away at life totals based on actions nobody can avoid: Spiteful Visions; Seizan, Perverter of Truth; Underworld Dreams; Zo-Zu the Punisher; Pyrostatic Pillar; the surprisingly potent Soot Imp; or, combining life gain and inflicting further life loss, Polluted Bonds.

If all else fails, you could try attacking with a giant creature with flying and trample. That usually does the trick.