Timmy, for those of who you aren't aware, is one of the "psychographic" profiles Mark Rosewater uses to describe Magic players (the other two are Johnny and Spike). The three psychographics break down like so: Spike plays to prove something (i.e., win); Johnny plays to express something (a whacky theme deck, or a combo you've never seen before), and Timmy plays to experience something (an awesome play, a great story, etc.).

You can probably see that there's some overlap between the three psychographics. You can enjoy the experience of winning, or express yourself in a way that makes for awesome stories. You can customize and maximize, or (less frequently) maximize and optimize. Nearly everyone has elements of all three psychographics, but for most people, one is clearly dominant. This isn't always true; plenty of people score as two of the psychographics on Rosewater's test, and some rarities—such as myself—register as all three. 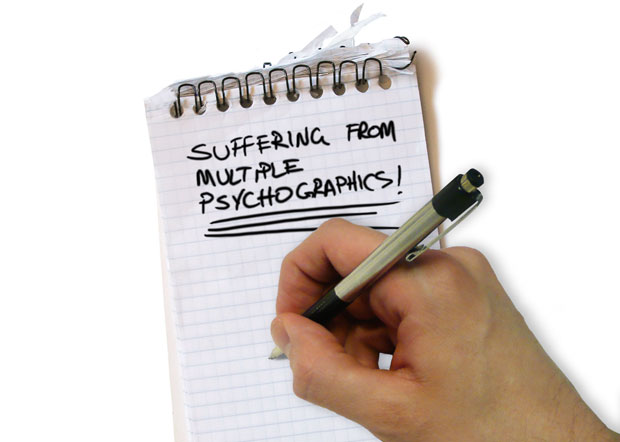 Years ago, I tested as a Timmy / Spike / Johnny, in that order, and while I think Johnny has probably overtaken Spike for the number two slot, Timmy is still firmly number one.

I'd rather play Progenitus a turn too late and risk losing than play a low-curve aggressive deck that does the same thing every game and win, and I'd rather win by tapping ten lands to play Progenitus than by repeatedly bouncing Oblivion Ring with its "comes into play" ability on the stack.

In fewer words: more than anything else, I'm a Timmy.

The Tao of Timmy

Let's take a look at who Timmy is.

You might want to start by reading Mark Rosewater's Timmy, Johnny, and Spike Revisted if you haven't, or haven't in a while (even if the test is getting a little dated these days), and I'd also recommend his Timmy Week article from Monday. I'm giving you the short version, but if you find yourself having any questions about who exactly Timmy is, I direct you to Mark. 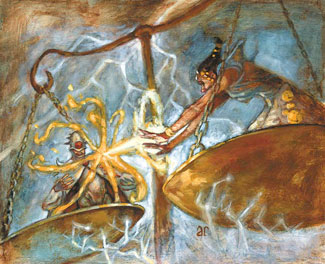 To summarize: Timmies play to have fun: "to experience something," as Mark puts it. What they want to experience varies widely—in fact, Mark has said that Timmies as a group are much more diverse than the other two psychographics, so it's hard to talk about "what Timmy wants." But the defining feature of Timmy is that whatever he wants, he will choose cards and decks based on these preferences—based on what he likes. This doesn't mean that Timmy doesn't care about winning, or isn't capable of judging power level; he just cares about other things more.

The Many Faces of Timmy 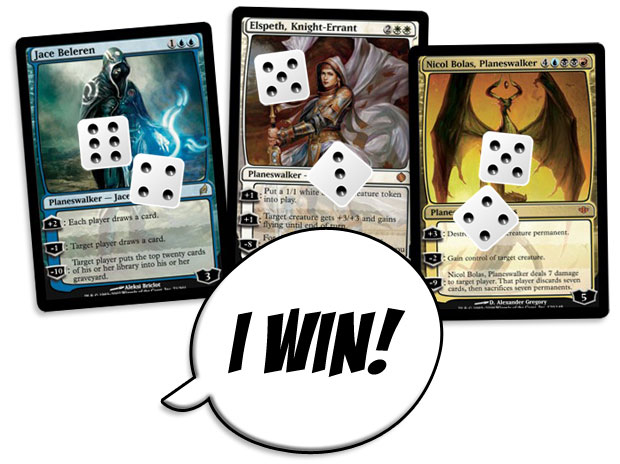 Jamie Wakefield, who played a Natural Order / Verdant Force deck called Secret Force in high-level tournaments for years despite the fact that it was really never the most powerful option, is a power gamer. So is Hellkite Overlord from my article The Dragons (who slammed a Vulturous Zombie into play with Dramatic Entrance with Traumatize on the stack), as is pretty much anybody who opened Progenitus at the Prerelease and just had to play it.

These are the folks who play primarily to hang out with friends and be part of a community of Magic players. Social gamers are likely to have weekly scheduled Magic games (sometimes multiple weekly games with different groups). As a rule, they don't like cards, decks, or strategies that keep other players from having a good time, and they're less concerned with winning than with having fun with a group of friends.

When I think about social gamers, I immediately think of my friend Carol, who looked at me like I was crazy when I started telling her about her deck's mana curve. She didn't care—she just wanted a deck that she could play without much effort while she chatted with her Magic buddies. That's an extreme, of course. The Elvish Champion from my article Elf Help is a classic social gamer (it's almost like I did that on purpose!), as is Broodmate Dragon from The Dragons. 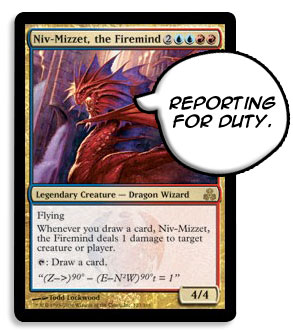 These folks want every game to be different and value the fact that Magic is huge and ever-changing. They'll seek out different decks, different formats, and different people to play with, and they're often drawn to Singleton and/or big deck formats. They love set release time even more than most, because of the promise of new cards and strategies.

The best example I can think of for a diversity gamer is ... me. Notice that I haven't written about the same format twice? Yeah, that's not just to keep the column interesting. I get restless. Sometimes I run off and play Limited. Sometimes I intentionally put fewer than four copies of a card in a deck so I'll draw it less often, and half of the reason I love Elder Dragon Highlander is getting to play a huge Singleton deck that can play totally differently from one game to the next.

Adrenalin gamers live for that moment of truth when they find out whether ... they ... GOT THERE! They want to build improbable mana bases and rap the top of their deck hopefully every turn. They want to flip a coin and see whether they Stitch in Time. They want to slam down that must-kill creature just to see if maybe, this time, nobody has the Cancel or Terror waiting in the wings.

The biggest adrenalin gamer I know is Director of Magic R&D Aaron Forsythe. I once saw Aaron sit down after a draft and lay out a beautiful, low-curve, two-color aggro deck with plenty of removal, good synergy, and some bombs. He had a third color laid out to splash, but it was pretty clear he didn't need to.

"This is terrible," he said, setting aside the greedy splash and shaking his head in disgust.

I thought back to all the times I'd seen him play thoroughly improbable draft decks, peering quizzically at each card he drew before cackling, casting some ridiculous spell in a color I didn't even think he was playing, and smashing me, again. His "beautiful" aggro deck was never going to do that—it was going to play pretty much the same way every game.

The happy ending to that story is that when I came by a few minutes later, he had taken out half of the consistent aggro cards, put the greedy splash back in, and made himself a monster.

Despite the fact that Timmy is probably the most common psychographic, it's also in many ways the most misunderstood. There are lots of negative stereotypes about Timmy, the end result of which is that I think a lot of people avoid identifying as Timmies because they don't match those stereotypes.

You've probably heard the stereotypes I'm talking about, whether you knew it or not. Timmy is a "little kid." Plated Slagwurm is "a big dumb Timmy creature." Timmy "plays bad decks" with 80 cards and 20 lands and one-ofs because he "doesn't know any better." Sound familiar? 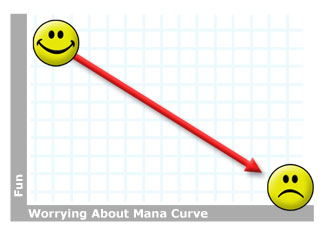 The roots of this prejudice are pretty easy to see. Timmy doesn't really care about optimizing mana curves or managing resources or squeezing every possible ounce of advantage out of every play. Now, note that I say "optimizing"—plenty of Timmies think about mana curves, but once getting the curve right becomes less fun than playing the deck as is, Timmy's shuffling it up.

Spikes in particular tend to look at this concern for fun over best practice and assume that Timmy simply doesn't know any better. Well-meaning Spikes (usually Timmy-Spikes) will help Timmy get his mana base just right, trim down to 60 cards, play 4-ofs, and all the other things that Spike considers fundamental. A lot of the time, Timmy finds this terribly dull and goes on playing his deck as is.

The end result of this is that people talk about Timmy as a "phase" that all Magic players start out in but should aspire to eventually grow out of—you know, as soon as they "know better."

This idea of Timmy as a phase is—I can't stress this enough—pure bunkum. Sure, a new player can someday "know better" than to build a deck with 20 lands and all six-drops, and will probably have more fun when he or she does. A Timmy can "know better" than to play cards that are worse than other readily available cards, if he wants to.

But for Timmy, there is no such thing as "knowing better" than to play the game with the goal of having fun. People who try to teach Timmy to optimize are missing the point of why he plays. That's not to say he won't listen—but like I said, once improving his play gets to be less fun than just playing, they've lost him.

There are Timmies of all skill levels and experience levels, and all of them have one thing in common: they play the way they want to.

All over the Magic Internet, many words are devoted to talking about strategy. There's nothing wrong with strategy—far from it! The chance to understand and eventually master the strategy is one of the things that make this game great. But the underlying assumption in strategy articles is that if a choice doesn't directly contribute to winning the game, you shouldn't do it. If it's not the best card for your deck, it's the wrong card. If it's not the best play at the moment, it's the wrong play.

This mentality doesn't speak to Timmy. Sure, winning is fun. Strategy helps you win. Great! But if it isn't fun, Timmy says, don't do it. Magic's not a job. Your deck list isn't a term paper. Magic is fun, and if you're not having fun, you really are doing it wrong.

I don't need to tell you that, of course. If you're a Timmy, you already know. And judging by all the great email I've gotten from people brimming with deck ideas and stories, an awful lot of you know exactly what I'm talking about. 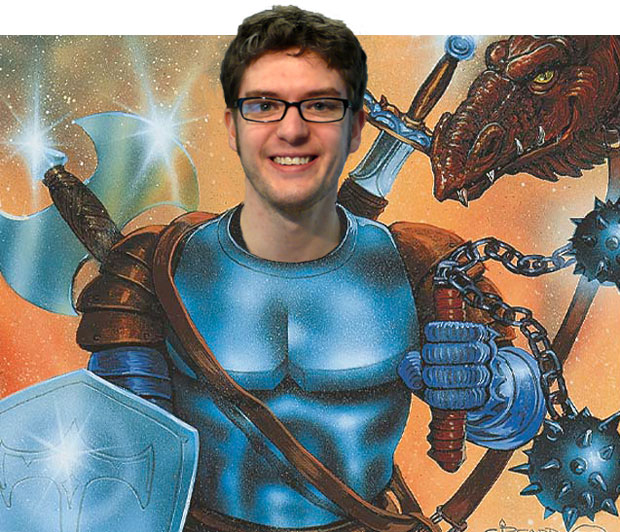 I have a humble proposal for all you Timmies out there: Let's take Timmy back from the stereotypes and misconceptions. Let's be proud of who we are and why we play.

Play cards because you like them. Build your deck the way you want to. Make some plays because they're funny, even if they don't necessarily help you win.

Laugh while you're playing. Enjoy your friends' company. Applaud a great play, even if it's the one that crushes you. Tell stories. Scrawl deck lists on every available surface. Make piles of cards for decks until you don't remember what color your table is.

Play competitively? You might still be a Timmy. Pick decks you like. Treat your opponents like friends instead of enemies. Be the player everybody enjoys playing against, win or lose.

Get out there, play Magic, and above all, have fun.