ou want the card? You get the card! 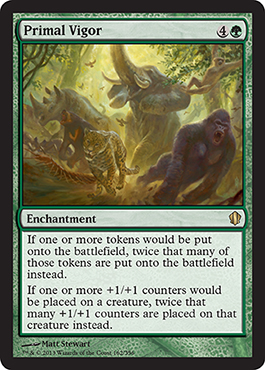 The doubling cards that have followed since Doubling Season have been variations that "fix" these problems, mostly by limiting the doubling in some way.

Primal Vigor doesn't care who controls the tokens or the creatures.

Primal Vigor is a throwback to the old days of Magic.

Primal Vigor is old school. Everyone gets the benefit. 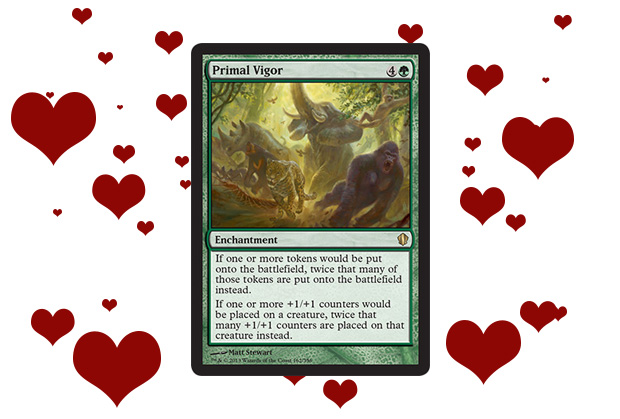 I get the benefits to the newer style of card. If your cards affect only you, you don't need to worry about your opponent. If I am about the play Honor of the Pure, I don't need to examine every other players' battlefield to determine if I'm giving them a bigger advantage than I'm getting by playing the card. There were plenty of games where I had Crusade but did not play it, since one of my opponents was also running white and had far more creatures than I did on the battlefield. By including the term "that you control," you limit the feel-bad moments in the game when you don't play a card because it was the better play to not the play the card.

That was something I loved about the older cards, and something I love about Commander in particular. With the one-of limitation in Commander decks, you will often find yourself playing those old-school cards that demand you take stock of the table before you play a card. It forces you to demonstrate your skill.

"Should I play this now, later, or not at all?" A card that can benefit your opponents puts a layer of strategy in your game that isn't there otherwise. What do you need to do to ensure that you benefit more than anyone else from this card?

"If I play this, will it encourage my opponents to attack others, since I'm giving them token creatures and +1/+1 counters?" These types of cards offer that group hug option that some players really want. "Look at what I'm doing for you, so don't attack me," can be an effective strategy, but I prefer a group bear hug strategy. Play Hunted Phantasm with Primal Vigor in play, giving my opponent ten 1/1 Goblins. Then follow that up with Massacre Wurm.

Given the open nature of Primal Vigor, when should you include it in your decks? First off, I would not simply treat it as a replacement for Doubling Season. Doubling Season works in decks where you are maximizing your desire to double token creatures and counters. While Primal Vigor can work in those decks, the collateral damage involved in giving random opponents benefits can be a serious drawback. I'm not saying it can't be done. There are times when you are already running Doubling Season in your Commander deck and need another card that does something similar. Primal Vigor may be just what you needed.

Primal Vigor belongs in a deck that takes full advantage of what it offers to you and what it can do to others.

I Ghave to You, then I Took Away

The idea behind this deck is to up your counters while limiting your losses. Cards like Tombstone Stairwell and Alliance of Arms gives your opponents many small creatures that allow you to gain significant life and/or kill off with Massacre Wurm, Elesh Norn, or other options. Cards like Aku Djinn provide benefits to all your opponents' creatures, and Spike Cannibal snatches all that benefit away. Also note the wording on Primal Vigor: "would be placed on a creature." That allows for this scenario.

Llanowar Reborn doesn't play the same, though. It isn't a creature, so it enters the battlefield with only one +1/+1 counter. It does double when you put it on a creature, but it doesn't double again. Don't be so greedy! I just gave you a 122/122 Spike Cannibal!

Some of the cards are just as good with Doubling Season as they would be with Primal Vigor, but it would be crazy not to include them for that reason. We are trying to maximize Primal Vigor, not run a deck that has no use for Doubling Season at all. Cards like Wurmcoil Engine are even more frightening to kill—two 3/3 deathtouch Wurms and two 3/3 lifelink Wurms. As if Wurmcoil Engine wasn't difficult enough to deal with! Hornet Queen brings eight 1/1 flying deathtouch insects with her!

Sigil Captain turns your already-doubled 1/1 token creatures into 5/5 tokens by adding four +1/+1 counters. Primal Vigor may not do anything with Ajani Goldmane's loyalty counters, but Ajani will put two +1/+1 counters on all your creatures with Primal Vigor's help. And if you manage to use the ultimate ability on Ajani, I'm sure you can find something to do with two avatars who use your life total as their power and toughness.

Polukranos, World Eater is there representing most of the creatures with monstrosity in Theros. Spending five mana on its monstrosity gives you four +1/+1 counters. In another deck, Stormbreath Dragon is a 10/10 with monstrous. 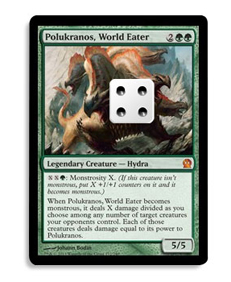 Obviously, this is no tuned Commander list. The cards are all over the place. There is no real mana curve, no ramp, and minimal removal of any sort. This is just to give you an idea of the options available with a card like Primal Vigor.

Other cards to consider with Primal Vigor:

There are so many others it is crazy to try and list them.

I'm sure you can come up with many more, and that doesn't even include the other new cards in the Commander (2013 Edition) set!