his isn't The Greatest Article in the World, it's just a tribute (to a good one): Jay Moldenhauer-Salazar's "Interlude: Investing in Real Estate." It's one of a handful of articles that changed my entire view of deck building and card collecting. You can read it yourself, which I recommend if you're interested in glimpsing the Magic of years gone by. The message is short and powerful:

There's only one major issue with referencing it today. It's outdated.

The lands, sets, and examples used invoke what was fresh and current seven years ago. We've been without the "pain lands" (Adarkar Wastes, Brushland, Karplusan Forest, Sulfurous Springs, Underground River, Battlefield Forge, Caves of Koilos, Llanowar Wastes, Shivan Reef, and Yavimaya Coast) for half of that time alone. The article preceded Ravnica: City of Guilds and the wonders of mana generation that followed it. JMS did a great job, but Magic moves fast.

Today is a new take on his original concept, updated and expanded for a world of annual core sets and dozens of new sources for colored mana. If you're peering into Return to Ravnica and want to play with all the colors, today can help set you down the right path. 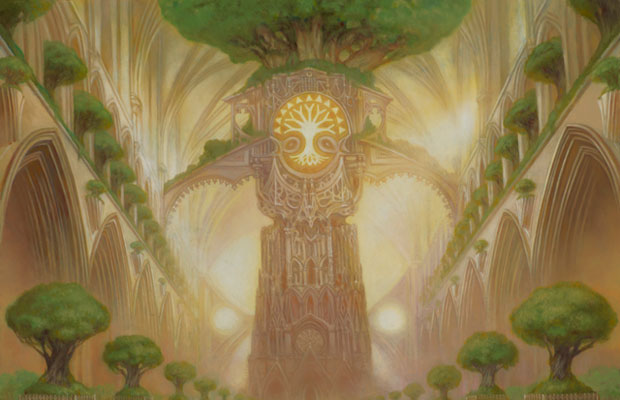 The Conditional Property of Mana

This is the fundamental nature Jay was driving at when he described good lands as the panacea to mana screw:

"I also believe that losing to mana screw is so frustrating that without good multi-lands you as a casual gamer face these options:

When you want to do something awesome, but simply can't, it's annoying—at first. When your deck sabotages you repeatedly it's because the cards you're using make it likely to happen. There are a lot of ways to slice up the odds of having a hand of uncastable cards. Instead of powerful mathematics, let's recall when it's happened to you. Have you played in several Draft or Sealed events? When was the first, or most recent, time you built a deck that just never got its cards down?

While using enough sources of mana is an idea for another day, having each one create multiple colors of mana lets good things happen. Unlike Jay's era, the real secret today isn't in having as many copies of "shock lands" (Blood Crypt, Breeding Pool, Godless Shrine, Hallowed Fountain, Overgrown Tomb, Sacred Foundry, Steam Vents, Stomping Ground, Temple Garden, and Watery Grave) as you think you could ever want but that you might want even more lands like them. 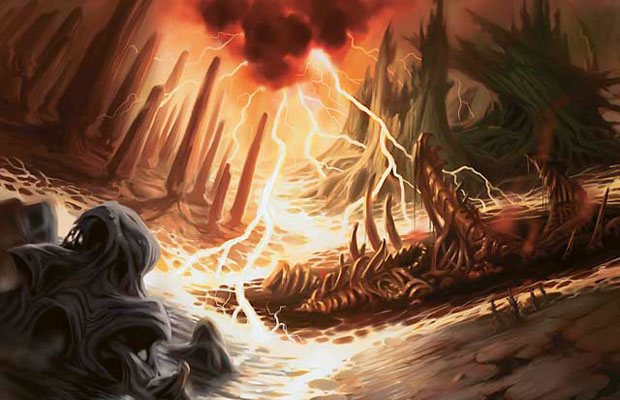 After the original Ravnica run, Time Spiral debuted with this treasure. Until that point, "fetch lands" were unique to Onslaught: Polluted Delta, Bloodstained Mire, Windswept Heath, Flooded Strand, and Wooded Foothills. They were the predecessors of the enemy color cycle in Zendikar: Misty Rainforest, Verdant Catacombs, Marsh Flats, Arid Mesa, and Scalding Tarn.

The fetch lands were all rare and harder to acquire. Terramorphic Expanse was revolutionary in that it was common. Even if you count the fetch lands from Mirage (Flood Plain, Grasslands, Bad River, Rocky Tar Pit, and Mountain Valley), the fact that Mirage was old when Jay started writing puts them far out of mind. Terramorphic Expanse really put the power of fetching into everyone's hands.

Evolving Wilds is the modern flavor of the same common fetching and sits at hand in Magic 2013. For completionists out there, Shards of Alara brought common fetching in a cycle of Panoramas that could grant only some basic lands: Bant Panorama, Esper Panorama, Grixis Panorama, Jund Panorama, and Naya Panorama. While all seven of these lands can find basic lands, as opposed to basic land types on the rarer versions, the utility of getting the land you need is still awesome.

Return to Subject at Hand

Wasn't Jay talking about lands that actually produced more than one color of mana, not just those that help you make more colors? Yes! Something Jay didn't know about Ravnica: City of Guilds was that a powerful set of common lands was about to change everything. 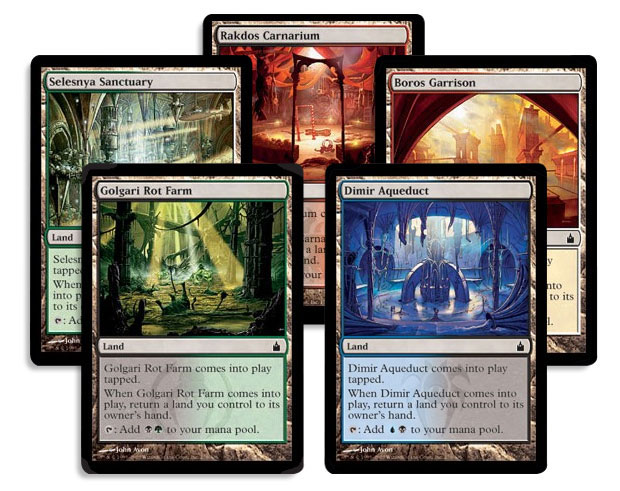 The "karoo" or "bounce" lands—bounce being the nickname of returning something to its owner's hand, and karoo refers to Visons's Karoo with a similar effect for one-color action—were good. In fact, Mark Rosewater shared last week they were just that:

"We wanted to change them out for three reasons. One, they were a little more powerful than we wanted for Limited (this was development talking). Two, the cards are a little more complex than we like at common, both in the unsummoning cost and the production of two mana—and two different colors at that. Three, we knew we were repeating the shocklands (hitting the nostalgia), so we wanted the common duals to be something new (hitting the novelty)."

You can find these lands today by looking through releases like Planechase 2012 and Magic: The Gathering Commander. The new common duals are the Gates: Azorius Guildgate, Golgari Guildgate, Rakdos Guildgate, Selesnya Guildgate, and Izzet Guildgate. 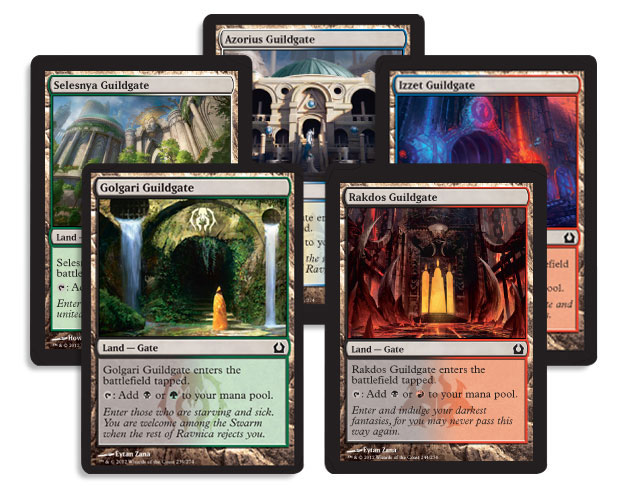 The Gates are a riff on older lands that enter the battlefield tapped from Invasion: Coastal Tower, Salt Marsh, Urborg Volcano, Shivan Oasis, and Elfhame Palace. Those older options faded away, just like the aforementioned pain variety, because we've been busy getting better lands over the past few years:

The shock lands are also a twist on these tapped lands. And just to pile the evidence up further, we also saw a cycle of lands that give two colors of mana but don't enter the battlefield tapped: the "filter lands" from Shadowmoor and Eventide (Fire-Lit Thicket, Graven Cairns, Mystic Gate, Sunken Ruins, Wooded Bastion, Cascade Bluffs, Fetid Heath, Flooded Grove, Rugged Prairie, Twilight Mire).

There are more lands that produce multiple colors, but these are most of those that came after Jay's article. The lands to make your deck hum with the right colors of mana are more numerous today than ever before.

But there's another dimension of mana sources Jay left out: artifacts. 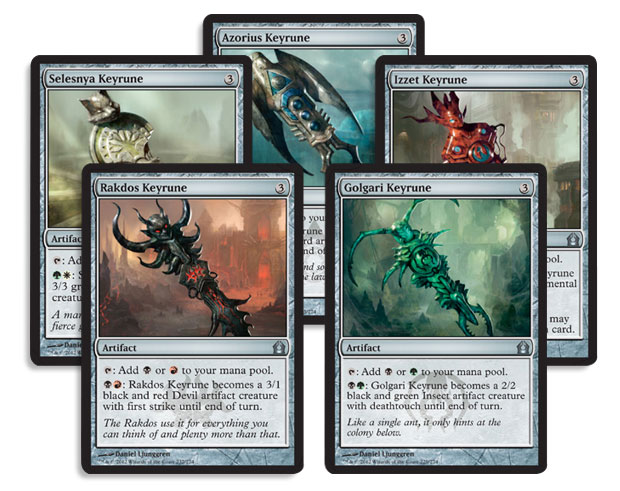 Return to Ravnica's Keyrunes pay homage to another set of mana sources Jay didn't know about: the Signets. 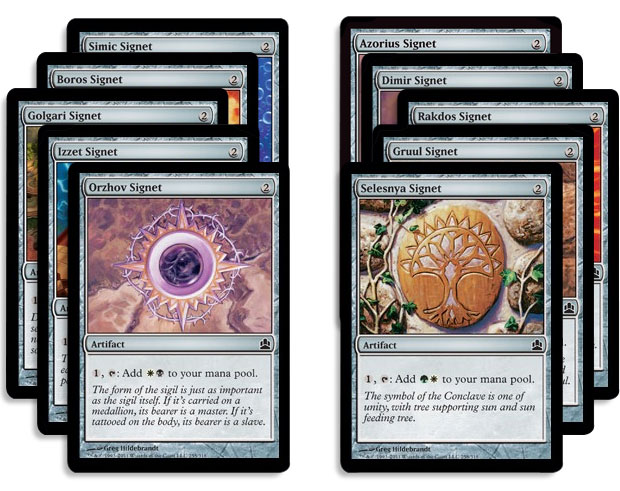 Just like the bounce lands, the Signets are powerful and have been conspicuously reprinted in several stand-alone releases. Unlike Jay's sole focus on lands, I believe using lands as well as artifacts helps decks. You get more mana to work with. You get more chances to have the right mana available. You get more cards that you can cast regardless of which lands you've been able to play. I like getting more. It's why I adore Commander so much.

Artifacts that make mana easier are more abundant than in Jay's time too:

Like the lists of lands, these breakouts aren't exhaustive either. My point, however, should be unassailable: Making mana of any color is easier than before, and can be done using cards across rarities. 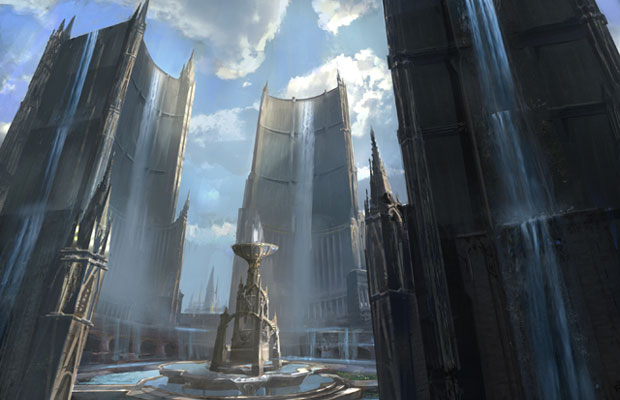 Returning to Our Decks

Lists, in a vacuum, are boring. What you can do with them, however, is fascinating. This weekend's Return to Ravnica Prerelease events will be the first time many of us can get our hands on Gates, Keyrunes, and shock lands. It's the first time we can grab a pack and potentially open Niv-Mizzet, Dracogenius. The awesome coming is something we've been waiting patiently for years to see.

Keep that patience at hand.

Whatever awesome you open, and whatever brightly colored decks you want to build, you need only jump back here to find an easy list of new cards to work with. Niv-Mizzet, Dracogenius is the legendary creature I most hope to open. It's also one that requires plenty of ways to make both blue and red mana together, ideally as a pair multiple times.

Let's tap into the Firemind for an example of how we can work this out for a sixty-card deck.

Twenty-six lands is a fair amount for handling sixty cards. Whatever spells we play alongside the new Niv-Mizzet will probably include a few that draw cards. Over a long enough game, we'll have a pretty even set of red and blue mana sources. However, this isn't thinking like an Izzet yet.

All I've done is swap out eight basic lands for four each of Izzet Guildgate and Evolving Wilds. This almost assuredly provides easy pairings of red and blue mana, with Izzet Keyrunes both playing along and helping us reach our Dracogenius mana faster. But this is far too mundane for any self-experimenting Izzet.

Mana should hardly slow us down here. Bringing together both newer and older ways to make blue and red mana means landing Niv-Mizzet, Dracogenius, which should result in a lot of damage getting thrown around. But even here an Izzet would scoff.

Now we're cooking with science! Instead of focusing on just the mana sources directly, Fabricate lets an Izzet-minded mage pull a fast one with Chromatic Lantern. Once we get one into play, any land we have can tap for blue or red. Sneaky stuff like Rogue's Passage happens to work with partner-in-crime Izzet Keyrune (with Stealer of Secrets available in Return to Ravnica, too). Cavern of Souls can ensure the Izzet leader will always make a splash, but the Lantern lets him use it for damage dealing too. Even Desolate Lighthouse likes it both ways: helping us find something we want and getting in on red-blue mana when the Lantern is in play.

While I would most likely finish building a thematic deck around the fourth iteration above, all of the ways to make mana are correct. There is never "one right way" to make the mana for your decks happen, but keeping the various ways in mind can't hurt. In fact, experimenting on new ways to generate mana in decks you already have—the most Izzet way to play with this—can lead to you adding even more fun things to do.

At the end of the day, what you want is to have fun. How you get there can help make that fun happen, and being unafraid to try whatever mana you want is the only way to truly discover what can both help the fun happen and be fun in and of itself. 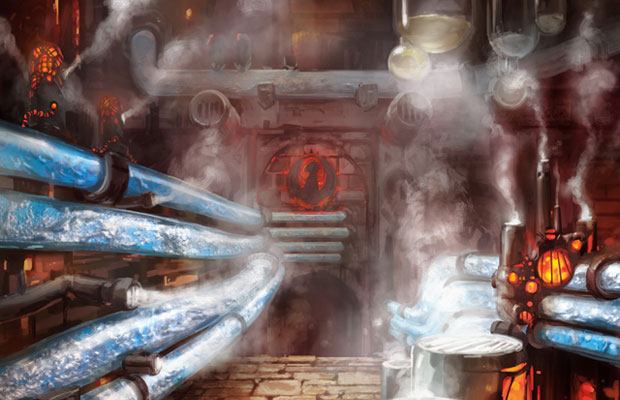 While I hope your Prerelease experience is as awesome as you hope, my mind's eye is already wandering ahead. Last week I asked a simple question:

I received four Kresh the Bloodbraided decks through email feedback, and it was the only commander who had some sent in up front. Curiously, he scored the lowest here. But some of the reasons I like Kresh happen to match up to things Jarad, Golgari Lich Lord can do. I'm glad almost half of you are behind seeing the Golgari leader immortalized with a Commander deck, because we're going to have the chance to do that soon.

For a sneak peek into the future of themes, you can check out DailyMTG.com's editor Trick's theme breakdown. It won't be long until the Golgari get a chance to shine in the darkness.

Join us next week when we get to populating some fields. See you then!