art of the reason I love multiplayer games is the chaotic nature of the games. When you add more players, there are more options, more permanents to track, and more opportunities for mistakes. 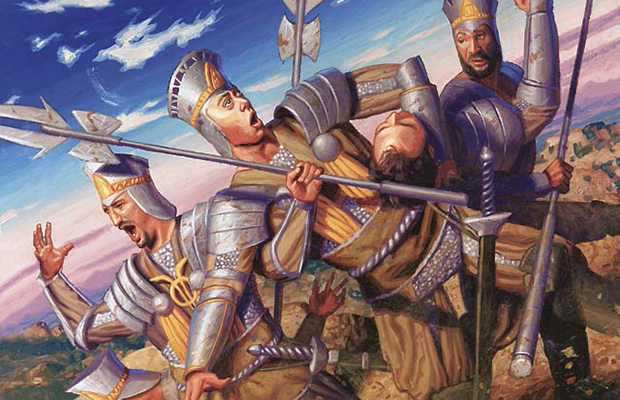 While the name can be confusing (Chaos Magic is a term that is also commonly used for regular multiplayer Magic games when any player may attack any other player), the game is crazy. I first played this variant more than fifteen years ago, and it ups the crazy in your games unlike any other variant I’ve ever played.

The basic idea of the game is that you have a Chaos List of 200 different options. Generally, each option is a spell from Magic, but the list also includes other elements. At the start of each player’s turn, during the Chaos Phase (which comes before you untap), that player rolls a 200-sided die. We often use a twenty- and a ten-sided die to get the 200 options. You look on the list and do whatever that option says.

Some of the options on the Chaos List are straightforward and quick. The first option, Eureka, is dealt with immediately and can quickly be forgotten. Other rolls give you options that last through your turn. Air Strike gives you three creature tokens that are sacrificed at the end of your turn. Other rolls give you access to counters that can be used to copy spells or counter spells, among other things. My personal favorite is getting a roll that lets you take more rolls, because sometimes one roll isn’t chaotic enough!

Chaos Magic also goes further than just the 200 options in the Chaos List. There is also the EnchantWorldLand list. Enchant World cards were a type of enchantment that Magic has moved away from. You could only have one Enchant World card in play at a time, and the most recently cast one destroyed all the others. The first roll in a game of Chaos Magic uses the EnchantWorldLand list. There are twenty options and one player rolls a twenty-sided die to determine which one starts on the battlefield. To get an idea of just how extreme these options are, consider what you get when you roll a 2:

Mirari Concentrate—All creatures gain +1/+1. All lands produce an additional mana of the appropriate type when tapped for mana. Whenever a player plays an instant or sorcery spell, that player may pay 4. If he or she does, he or she puts a copy of that spell onto the stack. That player may choose new targets for the copy. 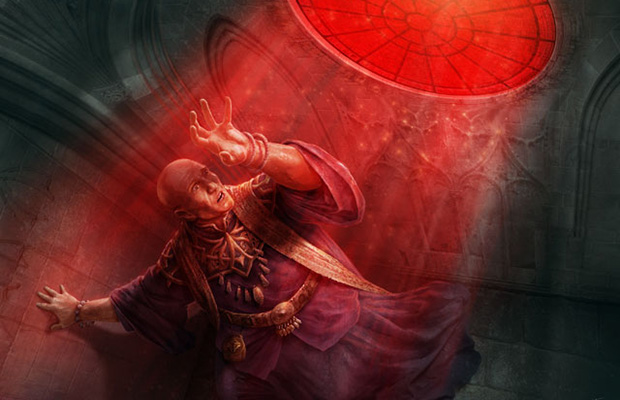 Curse of Chaos | Art by Jason A. Engle

Other lists include PersonaLand and Wackyland, both of which are accessed by getting particular rolls during the Chaos phase.

Trying to describe how this variant plays out is difficult, since it can go many different ways. I’ve had some games where the rolls didn’t make much difference to the game. Being forced to discard a card when you have no cards in hand is not game-crushing. If several players happen to get counters that allow them to stop a Chaos roll of their choice, things can be limited. These games don’t tend to happen as often, but they do happen.

Other games get a level of randomness that is enjoyable, particularly when the players in your game are not all that evenly matched. While a better player attempts to set up the battlefield to his or her advantage, Chaos Magic can quickly take the best-laid plans and blow them out of the water.

The truly crazy games involve board wipes, swapping life totals, multiple EnchantWorldLands on the battlefield at once, and players rolling multiple times during each Chaos Phase.

There are two major downsides: 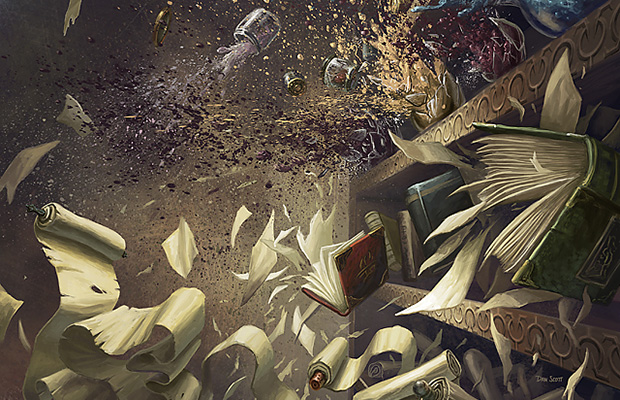 1. Time. When you add the Chaos Phase, you are adding a little time to each turn. As the game progresses and becomes more complicated, things tend to slow down as everyone tries to determine what has to happen and what can happen on their turns. Turns in regular games take longer when the battlefield gets crowded and complicated; Chaos Magic adds to that.

2. Paperwork. I have found that I need to keep track of the EnchantWorldLand currently on the battlefield, along with the variety of counters and other temporary creatures or benefits running. This isn’t always enjoyable for everyone, but if a game is so chaotic that I need to write things down to keep track, then we have reached the right level of chaotic!

There are multiple upsides:

1. You are never really dead. When the game says you are dead, Chaos Magic says, “Not so fast!” Right before dying, you get a Chaos Roll (on the Chaos List). If you can manage to gain any amount of life, you live on. Even if a creature has done 15 damage to you and you were only at 5 life, if you roll a 22 (draw cards equal to a die roll on a ten-sided die) and find a Healing Salve in your deck, you can save yourself and continue to play. On that “death roll,” Chaos Magic treats your life total as 0, not -10. While the player isn’t often saved, it regularly turns into a way for the dying player to get one final shot at the player who just killed him or her.

2. It creates a tumultuous game. It is much more difficult for players to maintain an advantage in a game where randomness takes a role, particularly when there are multiple players looking to take down the leader. I have found the swingy-ness of games goes way up.

3. Chaotic twist-ups. The rules don’t exactly cover every possibility. Many times, you’ll find your group is left to determine the correct resolution after a variety of effects hit the table. My group has spent minutes determining how the two Chaos rolls work with a hexproof or indestructible creature, or breaking down a stack of spells and Chaos rolls. I live for these twisted scenarios!

4. Build your own list! My group hasn’t done this, but you certainly can. With new cards coming out every few months, replacing older, outdated options with something new can make Chaos Magic your own personal variant. PersonaLand can be filled with the players in your playgroup. There are very few areas where this format can’t be personalized. Perhaps you’d prefer a Chaos List of only 50, but maybe 300 is more your style.