s you may already know, it's Feedback Week! While I'm sure there's room for fun things with cards like Parallectric Feedback and the original Feedback itself, Feedback Week is all about you: the readers and players who bring your mental muscle to our weekly articles.

Last week I set things in motion asking for your valued input regarding a few things:

There are certainly always more opportunities to get out there and visit events, and you still have until tomorrow night to vote and submit some awesome suggestions. Sometimes it's nice to just gather around the table, fill some bowls with tasty snacks, and have some friendly Magic fun.

Which is exactly what I did over the TweetMTG weekend.

The Few, The Proud, The Multiplayers

While you can season any flavor of Magic with TweetMTG, I happened to have enough packs of Magic 2011 handy for a local favorite: Group Game Draft. Armed with my computer and camera (which is, fortunately, hard to forget when you're at home) I let the players draft away while I refreshed the Twitter feed du jour. 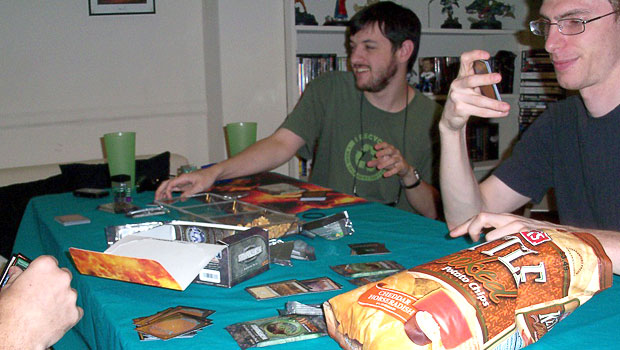 Here's who allied with which planeswalker for the TweetMTG chaos:

The game started off slow with lots of lands and Chris J leading an early Crystal Ball. Shawn started the blood with an Arc Runner into a defenseless Chris J. Then, the first tweet hit:

"Each player with the highest life total loses half his or her life, rounded up."

Suddenly the game took a turn for the faster. Chris J didn't mind though. 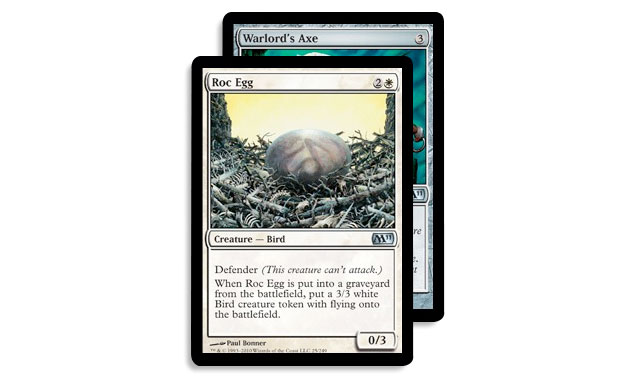 Brendan had an Acidic Slime for something, but Chris J threw a Mana Leak in the way. Chris J wasn't seeing any lands and had to Combust a Scroll Thief to keep from discarding it. Shawn just grinned when he cast a Fire Servant.

Chris P was racking up rumble points with his Cloud Elemental and added to the threat with a Gargoyle Sentinel. When Brendan had his turn again he played a Disentomb for his Acidic Slime which nailed Chris J's only Island—though the scry on Chris J's turn fixed that. Then:

"Destroy all creatures. Then Liliana's team returns a creature card from his or her graveyard to the battlefield."

Shawn, in response, cast Fling sacrificing Fire Servant to take Greg to 6. Greg swung back at Shawn before he played a Gravedigger for Blinding Mage. Brendan had a Black Knight and Nightwing Shade, then Chris J used his Ball to grab another land before:

"Destroy all artifacts, creatures, and enchantments."

There were a lot of groans with another random board-clearing effect hitting. 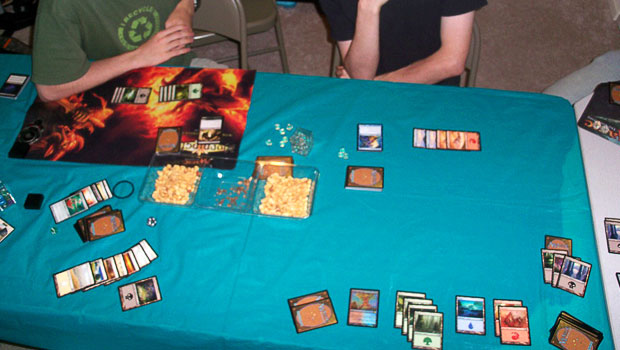 Shawn's turn brought a Lightning Bolt then a Call to Mind for Lightning Bolt—Brendan took both Bolts to the face, bringing him to 8. Greg had a Rise from the Grave for his Gravedigger, grabbing Blinding Mage again. Chris J played a fearsome Hoarding Dragon and fetched up Platinum Angel. Then suddenly:

"This tweet deals 4 damage to each creature and each of Chandra's enemies."

Yet another board wipe—killing the Blinding Mage a third time. Three in a row is a little crazy. Shawn's fresh Fiery Hound looked very scary on an empty board. Chris J's Harbor Serpent was even scarier.

Shawn liked that and played Act of Treason for the Harbor Serpent. Life total calculations, and pointing, abounded. Shawn took both into Chris J to take him out—and jumped up to 24 rumble points and immediately dropped an Ancient Hellkite onto the battlefield. Brendan found a Reassembling Skeleton and Greg dropped a Celestial Purge on the Hellkite before Shawn's next turn.

"Each player discards a card, then Liliana's team draws a card for each card discarded this way."

Greg responded with a Doom Blade on Shawn's Hound, who then followed up with a Traumatize back on Greg (double Armored Ascension and a Serra Ascendant were the highlights of the discarding), and then took Brendan to 4. The Elixir of Immortality Brendan had cracked was covering his losses for the moment. He then drew into it for his turn—he only had one in his deck!

Shawn dropped a game-ending Lava Axe on Greg. Shawn was at 5 life, but was rolling like he was at 20. Brendan took Shawn to 4, and Shawn dropped a Canyon Minotaur before:

Everyone laughed that finally a tweet didn't hit everyone hard. Shawn's Pyroclasm cleared most of the board before he took his Minotaur into Brendan. Chris P dropped a surprise Arc Runner which knocked Shawn out.

Brendan played a Blood Tithe, going up to 9, but when the Skeleton went crashing into Chris P a Hornet Sting ruined the plans for a turn. Chris P received a reprieve with:

The Skeleton continued to swing in against an empty boarded Chris P. Brendan upped the ante with a Greater Basilisk, but Chris found a Fiery Hellhound. Brendan's Nightwing Shade looked like the end. Chris P had a Manic Vandal for the Elixir of Immortality, which Brendan just used to go to 19 life.

When Brendan brought the Shade to bear, Chris played a Plummet. The Viscera Seer Brendan had to follow looked nice with Reassembling Skeleton. As he tore through his library with scry:

Brutal tweets! Brendan dropped a Gravedigger for his Nightwing Shade and Chris tried a feint with Hellhound but Brendan blocked with Gravedigger before sacrificing it to the Seer. Chris was in a tough spot—and didn't find the answer. Brendan won with lots of life thanks to the little Elixir of Immortality that could. 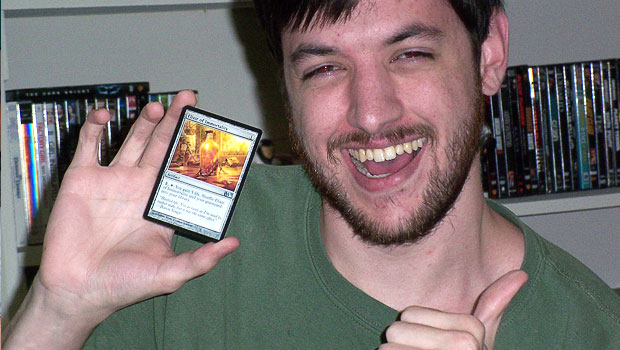 Everyone agreed that the game was really quick thanks to the big life loss at the start. While not every tweet was as sweeping, the game was certainly shaped by the powerful clearing effects. Everyone jumped right back in for a follow up game.

A few of the tweets that jumped into the obligatory sequel:

"Roll a six-sided die. This tweet deals that much damage to each creature."

This wiped away all the Soldier tokens that were just made (the die roll was a one).

"Each player puts a red creature token onto the battlefield—a 4/4 Titan for Chandra's team and a 1/1 Goblin for her enemies." 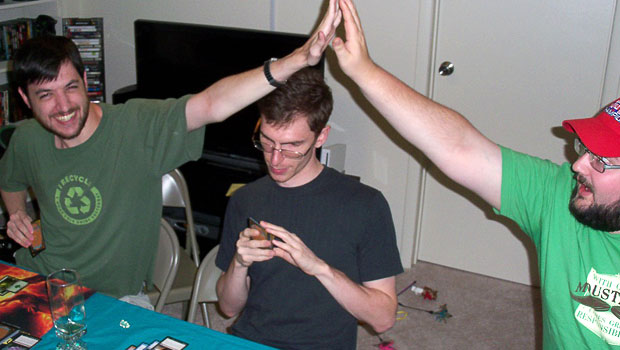 Chris J repaid it by sending flyers into Shawn.

"Until next tweet, if a red source would deal damage, it deals double that damage instead"

It let Brendan deal 8 damage to Shawn with the red 4/4 Titan token. Brendan was also at 32 life at that point. Shawn, at 1 life, repaid the favor by sending three Canyon Minotaurs and his Titan back at Brendan. Brendan played the Safe Passage he rumbled for. To be fair, before everyone started drafting, Brendan did comment that Fog effects are often really good as a rumble option.

"Until next tweet, all creatures gain vigilance and creatures Ajani's team controls get +1/+1 and gain lifelink."

Greg was thrilled at this, and, he too, cracked an Elixir of Immortality then immediately drew it again. He went up to 35 life, gaining 17 in one shot thanks to his lifelink critters. It also let Greg rumble out a Stormtide Leviathan.

Of course, Chris P dropped an Assassinate on it as soon as he could, but it was too late by then. The eventual final was Brendan facing down Greg. 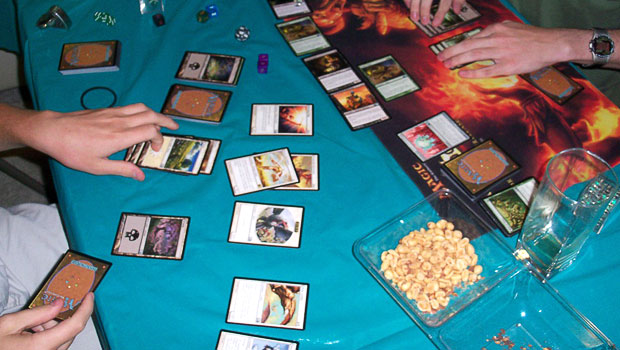 "Until next tweet, all creatures gain trample and creatures Garruk's team controls get +2/+2."

That tweet let Greg pound 9 damage through to Brendan, but both were bashing with big lifelink critters. Greg dropped a Mind Control for Brendan's Primal Cocoon pumped Child of Night and it looked like it was all over, until:

"Each player returns a sorcery card from his or her graveyard to hand. Chandra's team may cast his or her card without paying its mana cost."

Deathmark from Brendan took care of Greg's Serra Ascendant. Unsummon took care of Child of Night. But Brendan's Corrupt to bring Greg down to 4 was not enough as he could only muster 3 more damage. Game over for Brendan.

It's a Global Party

While I was furiously focused on hitting F5 for most of the weekend, I know I wasn't alone. Unfortunately, it sort of felt that way since I only received one TweetMTG tale from @wortwelt:

"We cube'd and as we dueled, we let the tweets affect *every* duel. So, if Tweet did 2 lifeloss and Liliana's Team would get ..."

"all life lost that way, the *one* player got life from *everyone* not on their team, though not in the same game!"

I love cube and all its great uses and stacking up the TweetMTG effects Ass Whuppin' style based on your choice of planeswalker ally sounds amazing. I wish I had tried TweetMTG that way.

So here's the deal: it's still Feedback Week! Send me your amazing TweetMTG stories, either using the handy 'Respond via email' link below or mention @the_stybs on Twitter. The catch is that, just like your decks and votes for Last week's article, I need your responses by tomorrow night—Wednesday, August 4.

So there you go! Whether it's an awesome new deck or a vote of confidence in something new, you can help make a difference at U.S. Nationals. And if you just have a cool story from TweetMTG this weekend I'll be glad to hear that too. Either way, you're why I'm here week after week—this is your time to shine as well.

I'll see you next week when we dig into the numbers a little!