Two Cards To Bring Them All (And In Fairness Bind Them)

Awesome things have happened, are happening, and will happen soon. You should go. I did, I will, and I promise it's super sweet.

Dark Ascension is about to be released everywhere, dropping a rallying cry for wannabe slayers and all-too-monstrous monsters to battle. Getting mauled at the Prerelease—which happens at every Prerelease for me—was a total blast. I'm sure you have your own stories to share too.

This week isn't about the glamorous occurrences of Sealed combat, though (although the glorious paces of such battle, if so desired, is something you'll see hit upon in Steve Sadin's article today). In fact, if you were here last week you'll probably chime in about déjà vu.

I'm going to talk about Commander again, but not the Commander you're thinking of.

What I mean is this: consider the already-well-discussed-everywhere Grafdigger's Cage from Dark Ascension. It does a few things:

Why are these important? Aren't the restrictions only relevant for Standard, Modern, and other tournament formats? 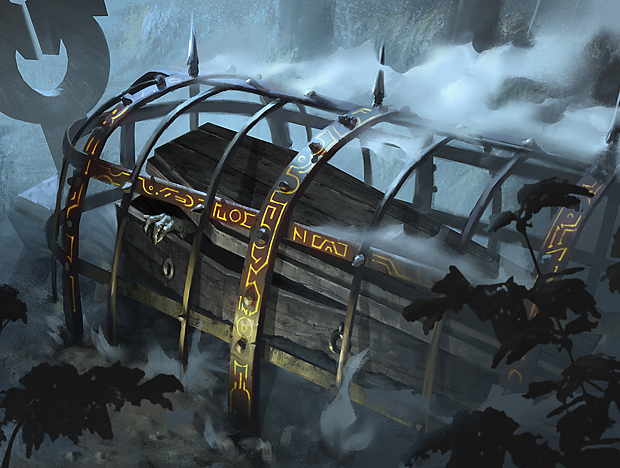 They aren't, yet I'm not hinting at just slamming the Cage into your next Commander deck. Let's back up a little further. One of the new cards created for Magic: The Gathering Commander was this mean guy:

Stranglehold is similar to Grafdigger's Cage in that it turns off several types of cards (albeit only for your opponents):

Stranglehold is brutal. When many of us grizzled, scarred veterans begin thinking about Commander, our thoughts wander to "Prime Time" and an array of powerful "Fetch me this!" effects. In a related way, the desire to take extra turns only grows stronger in a multiplayer game—why wouldn't I want to have another turn? Everyone else takes too long, and I just want to do my thing!

Let's get messy and talk about "fairness."

Fair is a relative term in Magic. There isn't any good definition as, well, fair is itself relative. Day of Judgment feels fair when your back is against the wall, but that view probably isn't shared by the horde-directing aggressor across from you. I could drill through dozens of examples but you get the point: fairness is a dicey proposition to solicit. 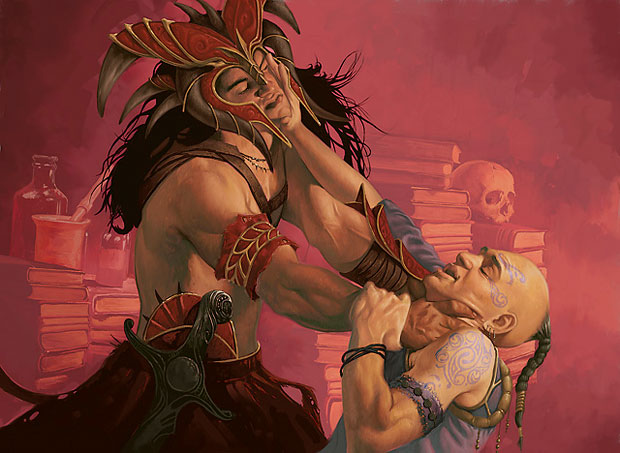 More often than not, fairness isn't decided by what is so much as what isn't. Commander carries a ton of things that my local play group decided was a little unfair, but solved it quite elegantly.

Boom. I'll let the ramifications sink in for a minute. When you're ready to move on, scroll past the epic art for Stranglehold.

There're many things in motion when we begin considering Stranglehold Commander, and the shortest summary possible was how I listed it under the pros and cons above. (So it's a little easier to, you know, explain the general weal of it to your friends. You're welcome.)

The "tutor" shorthand refers more specifically to the cards descended from Demonic Tutor, hence the nickname. Diabolic Tutor, Enlightened Tutor, Gamble, Green Sun's Zenith, and the newest of the bunch (Dark Ascension's Increasing Ambition) are probably what come to mind first. These cards are ever-present, and generally desirable, in Commander, thanks to their functional ability to bypass the randomness of an oversized singleton deck. Just last week I shared a sweet three-card combination possible through Increasing Ambition. It's fair to say I really like these cards, as I'm the biggest proponent of "being able to do the thing you want to do" style of Commander games.

But there's another angle to tutoring that everyone takes for granted. It's baked into just about every Commander deck conceived, regardless of the core colors involved. You probably rely on it without even realizing it. How often do you see a derivative of this card played in Commander?

Between "fetch" lands (Arid Mesa, Polluted Delta, and friends), Cultivate (and it's dozen or so previous variations), Sakura-Tribe Elder (and it's family tree of cousins, like Dawntreader Elk), and artifact representatives (Solemn Simulacrum, Armillary Sphere, Journeyer's Kite, and many more), ripping lands out of the library is trivial. I know this as a fact since I once had a landfall-esque Kamahl, Fist of Krosa Commander deck packed to the brim with every land grabber I had, yet ran a razor-thin count of just thirty-one lands. Usually, forty or so is the magic number; thirty-one is pretty thin for a deck desiring to play a land every turn.

Mana, I feel, is one of the most important features of a Commander deck. As it stands, it's incredibly easy to go overboard in ways to set that up.

Oh yeah, that card. Stranglehold strangles it off too. While taking extra turns is usually a blue-tinted affair, being blue isn't the issue. Consider the classic example of labor and cost:

Of course, the delivery guy isn't the one eating the cost for the lateness. And most material delivery contracts don't include terms down to the exact hour of delivery. After all, there is a reasonable expectation that most deliveries arrive timely except for circumstances beyond the control of the deliverer.

While, yes, there is some waiting inherent in multiplayer games, taking an extra turn causes a cascade effect, delaying every other player's ability to engage and develop in the game. Now don't get me wrong; taking an extra turn is pretty sweet. You get do more of the things you want to do, and it's usually harder for other players to stop it when you get to do two or more turns in a row. How fair taking an extra turn is perceived is, again, very relative. Being cognizant of the actual impact of those turns, however, is a very concrete idea you should keep in mind. 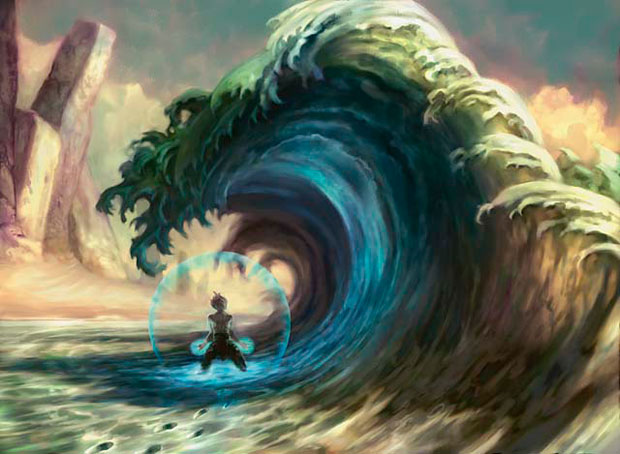 So where is this leading? The ability to grab everything on command—mana, men, and magic bullets—as well as loop all the turns together, contribute to some of the doldrums in the format. Every time I write about Commander I receive several emails that cite a number of things that are an issue for the writers:

These, ladies and gentlemen, are problems. Sitting down to a game but finding it decidedly unfun is a surefire way to close off wanting to sit down again. The Commander banned list is comprised of the worst offenders of the highest order of unfun-makers, but it certainly isn't an all-encompassing litany of things that can be perceived as unjust.

Stranglehold Commander was my group's way of enforcing a more level playing field. It doesn't make the format less exciting—you can still do all sorts of absurd and powerful things—but it does force more normalized methods for making things happen. When the draw step isn't just the one card between the upkeep and main phases, we think it's a move in the right direction.

This brings us back to Grafdigger's Cage, the start of the journey. While Stranglehold Commander certainly affects the methods many of us apply to dealing with a big random deck, I don't think it goes far enough to create the types of Magic games I enjoy most. 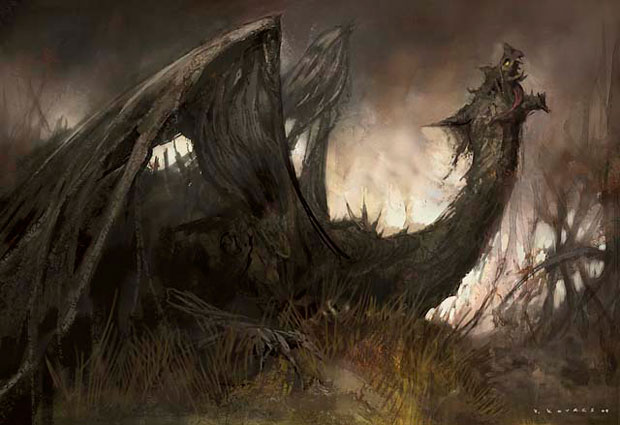 Rise from the Grave | Art by Vance Kovacs

When Stranglehold is out there is still a way to tutor things and get ahead: recursion. Animate Dead;Emeria, the Sky Ruin; Karmic Guide; Rise from the Grave; and many more similarly sinister reanimation effects become decidedly more powerful. Libraries might be sealed, but the graveyard is still a free-for-all grab bag of goodies. I noticed the same players who best leveraged tutor effects similarly adjusted their focus to graveyard cards when building for Stranglehold Commander.

I also know this for a fact as I was one of these players myself.

The impact of Grafdigger's Cage can extend far beyond the competitive events it promises to affect. Consider a revised Stranglehold Commander:

Very, very similar description, but the implications are similarly expansive. I don't need to spend much time drilling the "drawbacks" of the Cage since Zac Hill's aforementioned article did a great job breaking that down.

What I want to do now is show you that Stranglehold Cage Commander isn't as far off the mark from the usual fare as you might think. Thanks to my Commander Box, it wasn't difficult for me to build a deck for this new format.


Looking at a massive list of cards is daunting, but I wanted to lay it out since many of you asked to see these lists anyway. Here's a breakdown of a few key standouts from the deck.

Sword of Fire and Ice, Maze of Ith, Strip Mine, and Wrath of God are all present and accounted for. The massive overlay of far-reaching rules doesn't remove every card we just can't help but play everywhere. Stranglehold Cage Commander isn't about being on a budget or removing rarer cards from the mix, but rather removing the types and effects that cards can provide. 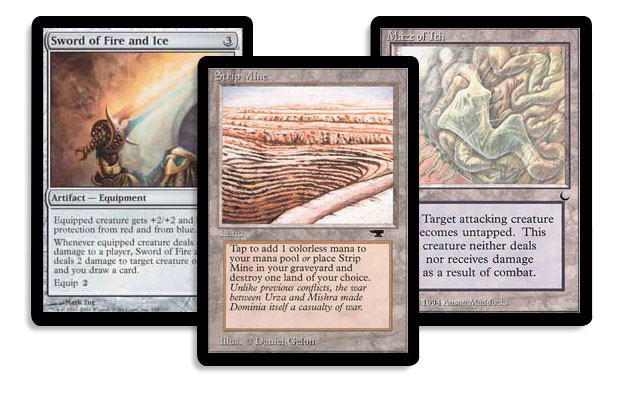 It's obvious that some cards get worse under these rules. Time Warp, Rampant Growth, and Zombify all "do nothing." But some cards get way better. Compare Swords to Plowshares to Path to Exile; when you can't search libraries, Path to Exile is more formidable. Mind's Eye is a classic feature of multiplayer games since you have more opponents drawing more cards. It's often on the "nuke on sight" lists players often compile. Diviner's Wand is considerably less attractive normally, but functions as a more reliable mana dump for drawing cards while providing flying for a creature. Ghost Quarter steps very close to Strip Mine.

And these are just easy ones from my deck. When you throw cards like Boldwyr Heavyweights into the mix, the potential of things you've specifically avoided becomes clearer!

I wanted to take advantage of white's assorted "destroy all creatures" effects, so I added three cards to help me out: Colfenor's Plans, Cold Storage, and Helvault. But "saving" my own creatures to stockpile for a future reload is sneaky. Similar to recurring them from the graveyard, I can get ahead while bludgeoning the battlefield. It takes more work and dedicated persistency to ensure it happens, though, and, unlike the looping grave grabbers seen so regularly, getting to use Helvault or Cold Storage is significantly more interesting to work with. 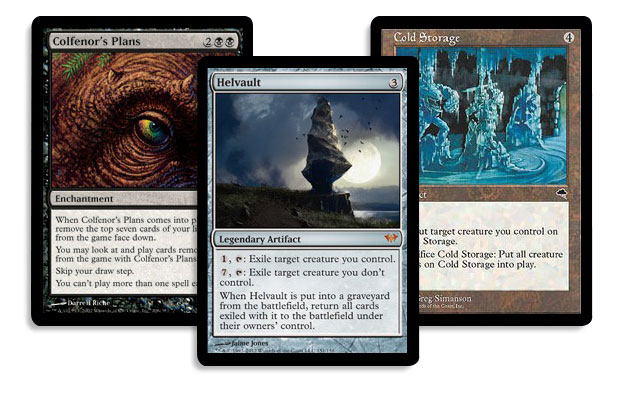 Adding rules that completely reshape a format's experience isn't an everyday idea. In fact, I would advise that you very carefully consider exactly what rules you add and why. Most importantly, everything should be discussed with your friends and play group. They, too, want to see awesome things.

Since Commander is pretty awesome, last week's poll asked you to tell me what deck to develop.

The Saproling contingent came through! I was personally pulling for the Guru of Spores, so its victory is definitely something I appreciate. So thanks!

This weeks' poll is to clarify how I'll be building the sporemaster to taste.

Once I know which way is up I'll rally the troops, flesh out and sculpt the deck, and throw down a game to show it all off. The question is all around which flavor of Commander you want to see!

Join us next week when I show you how to throw a real party! See you then!