Two for One Sale on Now!

When I saw the extort mechanic in Gatecrash, I was giddy with excitement. Extort is a fine mechanic for one-on-one games, but it really shines with multiple opponents. I love a mechanic that just shines for multiplayer and extort was great. Add more opponents and you do more damage and gain more life? What was not to love?

I'm feeling the same way about tribute! A creature with a tribute ability offers your opponent a grim choice: either it becomes even larger, or it does something nasty to your opponent when it enters the battlefield. For more details, see the "Born of the Gods Mechanics Article."

Tribute is an interesting ability. What tribute offers to multiplayer is completely different from extort. I know, extort gives you bonus lifegain and life loss while tribute gives opponents a choice. What I'm focusing on is the theory side. When playing one on one, extort would take 1 life from your opponent and you would gain 1 life. It would be better with multiple opponents, but it is still good. Tribute, on the other hand, makes a card actively worse in one-on-one matches than it is in multiplayer games. When there is only one opponent, that player is going to give you the version of the card that you want the least. With multiple opponents, you can pick the opponent who is most likely to give you what you want. Extort was a small bonus in one on one and rocked in multiplayer. Tribute makes a card worse in one on one but better in multiplayer.

Explaining this in the abstract is difficult. This would be easier to understand with a practical example. Let's use Flame-Wreathed Phoenix. 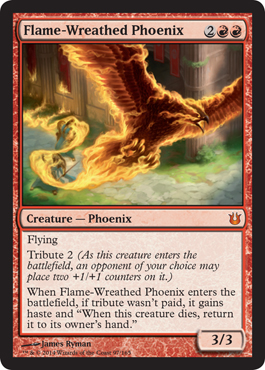 We can talk about how amazing this card is in a minute. Let's get back to tribute using a real example.

You are playing a one-on-one game against me. You decide it is time and cast the Flame-Wreathed Phoenix. At this point you are essentially handing me two creature cards and saying, "pick one." 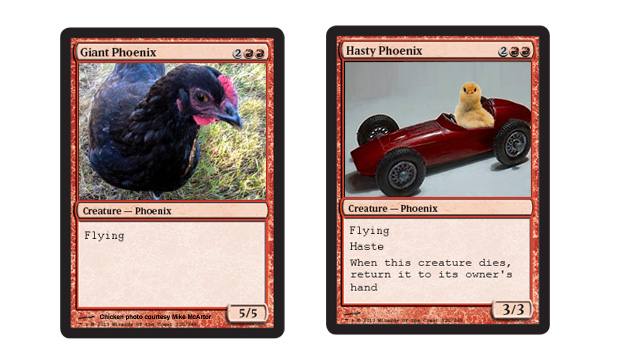 Just to make things easier, I'll refer to the options as Giant Phoenix for the 5/5 flying version of Flame-Wreathed Phoenix, and Hasty Phoenix for the 3/3 flying, haste version with the ability to come back to your hand when it dies.

In this scenario, I can look at the battlefield and determine which version of the Phoenix is less of a problem for me. If I have a way to kill it, then making it into a 5/5 without a way to play it again is best. If I have a 4/4 flying creature, then I'll want you to have the 3/3 and laugh as you pay for it again and again. In one-on-one play, you are always getting the lesser version. Don't get me wrong. When the choice is a 5/5 flier or a 3/3 hasty flier that returns to my hand when it dies, getting the "lesser" version is still awesome!

However, let's look at this in a multiplayer scenario.

You decide it is time and cast the Flame-Wreathed Phoenix. Tribute says that an opponent "of your choice" can decide whether to pay the tribute or not. You are playing against me, Carl, and Dwight. I am at 43 life and have the ground creatures locked up with several big creatures. I have a 4/4 flier that is causing problems for you and Carl. Dwight also has a 4/4 flier, but he is playing defense with it and doesn't see me as a threat. 1 Given all of this, you look at Carl and tell him that if he gives you Giant Phoenix, you'll start to put the boots to me. Carl doesn't like the idea of giving you Giant Phoenix, since it will probably be something he has to deal with down the road, but for right now, you just tossed him a life jacket. He is going to give you what you want. 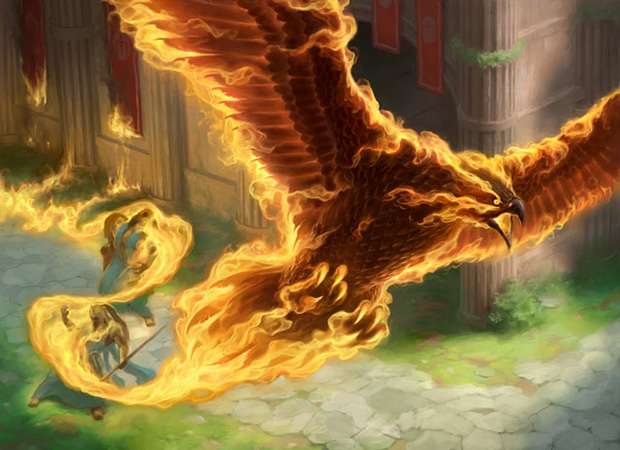 This is why tribute is making me giddy! Tribute gives you the opportunity to test your diplomacy skills and try to get what you want. The multiplayer scenario is just one option. There are times when you are going to pick someone in the game because you think you can convince him or her to give you what you want. You can use reverse psychology. You can make promises. You see two players are starting to battle each other, so you give one of them the option, knowing that player is going to pick the option that most hurts his or her rival.

Moving away from just the tribute, what happens if you have to make the choice? What are you going to give your opponent? Let's consider the options.

One half of this question is pretty straightforward. You get Giant Phoenix for only four mana. The last time red saw a 5/5 flying creature for four mana, it was Ninth Edition and you had to sacrifice the Rathi Dragon unless you sacrificed two mountains! There is no doubt this is a solid creature. A 5/5 flier is something to watch for and it seems unlikely that this is the option you are going to want to give.

The other half can be a little more confusing. Are you willing to give your opponent a 3/3 with haste that goes to his or her hand when it dies? If you are used to playing with other Phoenix creatures, this is different from most. You don't have to pay to get it out of the graveyard and into your hand. Hasty Phoenix dies and comes right back to your hand.

This recursion comes with a smaller body, but it starts to hit opponents immediately. Check out this basic chart:

It shows how the damage stacks up between the two options. If you are simply worried about taking less damage early on, it may surprise you that picking Giant Phoenix is the way to go. It isn't until the third turn that the 5/5 deals more damage total, and even then, it is only 1 more. If the creature stays in play longer than that, then Giant Phoenix is the better option, but if it stays in play longer than that, you were probably close to dead anyway!

After saying all of this about tribute and its value in multiplayer and one on one, don't be too quick to ignore this card when you only have one opponent. As someone who has played Fact or Fiction; Steam Augury; and Jace, Architect of Thought, I keep a few things in mind when it comes to opponents and choices:

As for me, when I play Flame-Wreathed Phoenix, I am really going to want my opponent to suffer. I want my opponent to anguish over the choice, knowing that either way, it will be costly. The deck below is not a deck I would recommend playing. Consider it a list of cards that make Hasty Phoenix or Giant Phoenix miserable to deal with.


Experiment One, Gyre Sage, and Renegade Krasis all have evolve. Either you'll be evolving them several times as you recast Hasty Phoenix or you'll be getting to evolve them when they are big due to Giant Phoenix. The Krasis will pile on the +1/+1 counters if your opponent should choose to give you Giant Phoenix.

The Thornscape Familiar (and Cloud Key) reduce the cost of the Phoenix, so recasting it again and again will likely only cost two red mana.

Exuberant Firestoker, Drumhunter, Paleoloth, Spearbreaker Behemoth, and Where Ancients Tread all give some benefit if Giant Phoenix (or any of the other 5-power creatures) are on the battlefield.

Ordeal of Purphoros, attached to Giant Phoenix, requires the Phoenix to only attack once before it deals the 3 damage. Cauldron of Souls and Doubling Season also take advantage of the +1/+1 counters rolling around in the deck to just make things a little worse for your opponents.

I look forward to seeing how all of you use Flame-Wreathed Phoenix to drive your opponents crazy!

1: I love Dwight! He doesn't even know that I am probably going to take him out of the game in a turn! (return)