Note to the gentle reader: The views in this article do not necessarily reflect the views of Wizards of the Coast or its employees. I am laying out an opinion that I think bears discussion – on the message boards, on other Internet sites, at local stores, and perhaps even within the DCI. Wizards is under no obligation to care what I say on the matter. They’re big boys and girls, and they’re the ones whose salaries are on the line when they make decisions on these matters. Keep that in mind as you read this.

don’t often do “issue” pieces. But this has been on my mind for a while, and I’d be interested to hear the conversation it sparks. We’ll return to funky decks and formats next week – though in a very serious way, this article is about those kinds of formats and decks.

By the time this article goes up, a large number of Magic players will have fond memories of the previous weekend’s prerelease. And not for the first time, a huge infusion of Magic players who only attend prereleases will have driven the emotional and financial success of these prereleases. Across the world, prereleases regularly bring in the largest crowd among any sort of tournament in the game. Pro Tour Qualifiers, Grands Prix, local shop initiatives – Prereleases outperform them all in sheer volume of players over a given year.

There are a couple of reasons why large numbers of players – so many of them self-described as “casual” – show up at these particular events. No doubt, the excitement of a new set is first and foremost. Another reason would be the easy-going nature of most prereleases – such tournaments have a low “K” value (that is, results don’t weigh too heavily on your sanctioned rating), so even hardened tournament players can relax a bit and let their opponents take back the occasional move.

But there’s something else going on here, as well. I saw it clearly for the first time during the Mirrodin prerelease, when Wizards first sanctioned team sealed events at prereleases. The attendance numbers in our little corner of the world (Minnesota) were stunning and unprecedented – tables upon tables of teams stuck around, after a full day of playing individual sealed matches, to play with their friends.

I’ll repeat that last part: to play with their friends.

Magic: The Other Team Sport

We often enjoy (or deride) a stereotype of Magic players being “lone wolves” who don’t (or didn’t) quite fit in well during high school and made their own social and academic opportunities. We’ll discuss the accuracy of this and other stereotypes some other time; but for now it’s enough to know that this picture is, at best, incomplete even where it applies. Humans are social creatures. We seek out new friends, and enjoy opportunities to strengthen ties with existing ones. Recreation of any kind is a favorite way to make that happen. It’s easier to relax and enjoy the social interaction when you’re not on deadline, or piled up in homework.

In that seemingly simple sense, Magic players are no different from basketball players or soccer players. While individual achievement is meaningful, very little can replace the feeling of working together as a team to reach a goal. (Whenever my wife sneers at the team sports I watch on television, I point out to her that I would never have come out to Carleton College, and therefore never met her, had I not participated in many extracurricular activities, including intramural team sports. I don’t know if this elevates or lowers her opinion of such sports; but it does quiet her down long enough for me to catch the instant replay.)

Professional Magic players say, over and over, that team Rochester is their favorite format. (This format still requires players to face each other as individuals; but they select cards and build decks as a team.) They point to at least two things: the higher role that skill plays relative to many other sanctioned formats, and the chance to work together with friends to accomplish a goal.

Again: to play with their friends.

The Way To A Corporation’s Heart

So imagine you’re a DCI dude (I’m afraid even as a Level I judge, I don’t know the official staff title) looking for ways to increase tournament attendance. After all, you’re always trying to grow your market and maximize profits. You might seriously consider a format that:

Which is why you would have to seriously consider true team play – either “Two-Headed Giant” or “Emperor” – as the next sanctioned format.

Let’s look at the multiple benefits to Wizards and the Magic community of a sanctioned “team-play” format:

Bottom line, there’s an opportunity that could expand Wizards’ market, increase revenue per customer, and make the customers more satisfied with every purchase.

So what’s wrong with this idea? Actually, quite a few things.

What’s Wrong With This Idea

As an analyst by day, I get paid to consider pros and cons. I’m doing a faster job on this issue than I generally do, since Magic is just a game to me. But I can still see several reasons why Wizards would hesitate to sanction team play. Here are the issues proponents must face:

To move forward with a new format, Wizards will need at least three things (and I’m sure they reserve the right to add to this list):

I think there are two fabulous ways to test the water for all three, and it doesn’t have to cost Wizards a single additional dollar. (In fact, the research might make ‘em money.)

Fabulous Way #1: Later this year, Wizards will continue its annual tradition of the Magic Invitational. Mark Rosewater runs this high-profile event, which takes 16 of the best players in the world and makes them play in all sorts of unconventional formats. 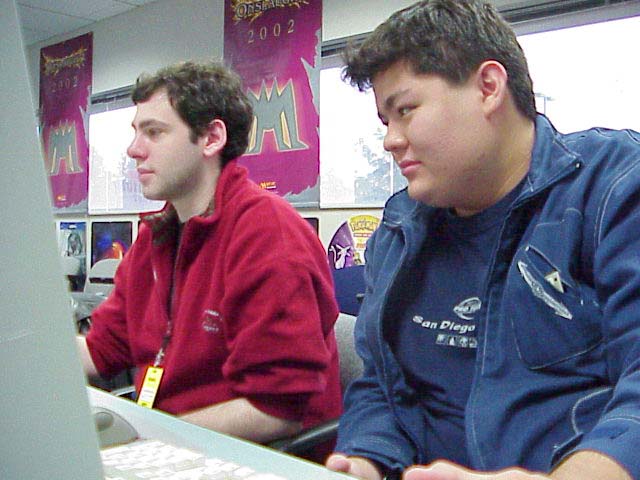 Two-headed giant teammates Diego Ostrovich and Carlos RomaoOnly once has this included a multiplayer format - The 2002 Invitational, which included 2-headed giant. Beyond this article, I haven't seen much in the way of the "results" of the format: what did we learn works? What did we learn didn't? Was Wizards studying the format for possible sanctioning? Did it occur to them that they might be on to something? (It's okay if it didn't. Goodness knows people can't think of everything. For my own part, I forget to take out the trash virtually every Monday evening, which leads to an embarrassing bathrobe-on-ice spectacle every wintry Tuesday morning as the truck pulls up.)

It would be great to hear more about what Wizards learned from this experience, and whether they plan something like it again. And it would also be great to have Mark, and Randy, and the other good people at Wizards and the DCI share what they learned from seeing pros do it a second time. And while we're at it, it would be super-duper great to hear from the pros who have done it, and would do it again, and see the strategic possibilities (and problems). 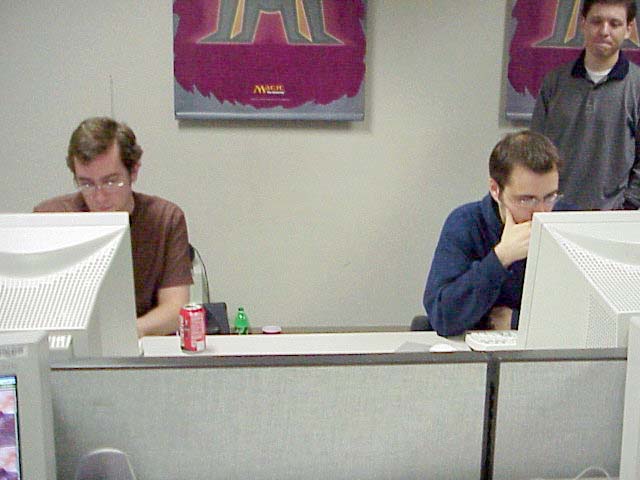 Dave Price and Chris Pikula have been teammates so long, they don't even need to look at each otherI plan on calling Mark and telling him so. You should not call him; but you should email him. (Now don't feel bad for him if he gets flooded even deeper than he already is! He keeps telling us how much he wants to hear from him, and for all we know I just helped him write his next two mailbag columns.) Bear in mind that while Mark does not respond to every email, he does commit to reading each one. So whether you like this idea or not, tell him.

Seriously, would it kill the 16 best players in the world to buddy up and play? Well, let's go back to the 2002 videotape: no, they're all still alive. And I'll bet they'd love the chance to do it again. They're really lovely people, these pros. And if they hate repeating the experience, well then, we'll have learned something, won't we? And the pros will live with the disappointment. It's not like they didn't get a free trip to Australia, or the Galapagos Islands, or Mars, or wherever the game is played.

Fabulous Way #2: Wizards should encourage local tournament providers to test a two-headed giant format, unsanctioned, at a Prerelease this year. (I say two-headed giant because I believe it’s the less complicated format, with less opportunities for grey-area behavior.) The timing would be great – the next “big” set’s release will be within a month of the Invitational. Those local tournament providers who want to give a cool, exciting opportunity to their customers – or maybe just those who want to discover a new revenue stream – will gladly volunteer.

The only additional burdens would be some administrative time – adding a publicity line to their web site, registering one additional side event, setting up pairings (by hand, so cap the participation), and then providing a brief, two-page report to the DCI on what their customers liked and hated about the format, and what they see as the benefits and challenges. Maybe there’s more to it than that and I don’t see it. Maybe some local organizers wouldn’t want to do this even if it was simple. Maybe some would, and I’d give them free press before that Prerelease weekend. The world is full of maybes, isn’t it?

While this market research wouldn’t be perfectly scientific, it would give Wizards about as nifty a sample of customer demand as you can get for free. And it might make them, and your local organizer, more money as well.

So, in the interests of making Wizards and your local tournament organizer more profitable, I urge anyone who likes this idea to contact both Mark Rosewater and their local tournament organizer and ask them what they think. Email them politely, and send ‘em this article’s link. (If you don’t know who handles the prereleases in your area, ask around at a local gaming store, or query a knowledgeable friend. NOTE: I am your friend, but I am not knowledgeable!)

If absolutely nothing happens, we casual players will still have these wonderful team-play formats to treasure. On the other hand, if something does happen, we can rejoice that Wizards and the Magic community will be richer for it – both literally and figuratively.

You may email Anthony at seriousfun@wizards.com. But please try to post opinions on this topic to the message boards, where actual Wizards staff can read them as well!