n my continuing quest to categorize all of Serious Fun's treasure trove of ways to play, I've been reading a lot of Anthony Alongi. He holds a prominent place in my own Magic history, having kept me interested in trying new things and exploring the great Magic unknown throughout the years.

He was also a mighty fine writer, so you'll have to excuse me for borrowing some of his efforts. I plan to Steal Like an Artist, as Austin Kleon wrote. (It's a short but engaging book.)

This week is Helvault Week, a theme dedicated to the namesake's importance to the plane of Innistrad. You can find a lot of awesome information about what the Helvault means in Doug Beyer's background on it. You'll also catch a rebuilt deck involving it in today's other article, Gavin Verhey's ReConstructed. And that's just the tip of the silver prison.

I'd like to start tabula rasa, looking at creating a new Commander deck from the floor up. This isn't an exercise in everyone voting, but a deliberate demonstration of the process I use to build decks. As you might already be aware, I don't build my decks to be as empirically powerful as possible. I build with instinct, desire, and ample moments of bubbling joy.

And I want you to see exactly how it happens. Let's crack open what's trapped in my mind.

Helvaults: How Do They Work?

While the humans of Innistrad probably feel the return of Avacyn is a genuine miracle, the Helvault's inner workings aren't so mysterious. 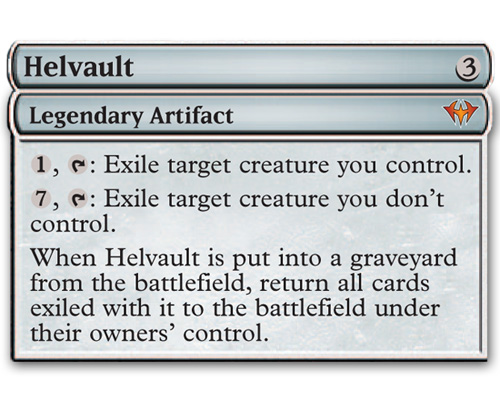 While many of you might have been surprised by the abilities, I found the Helvault to be a compelling update to a card long forgotten: Cold Storage.

The similarities are striking. (For full disclosure, Cold Storage looks like a "fixed" version of the even older land, Safe Haven!) Thanks to my ongoing efforts at building my Commander Box I happened to have a copy to boot.

Of course, having some cards isn't the same as having an idea. What both Helvault and Cold Storage inspired me to do is take advantage of creatures that like to enter the battlefield. These "ETB" creatures are all over the place—from Inferno Titan and Sylvan Ranger to Mystic Snake and Solemn Simulacrum—and are usually ones you like to cast anyway. If I'm getting the chance to put them into play again, getting an additional benefit seems awesome.

Fortunately, doubling up on triggers is almost as old as Cold Storage. "Flicker" effects are aptly named by their progenitor, Flicker, and come in plenty of Modern flavors:

Momentary Blink comes with a flashback cost in blue, which reminded me that there's another way to recycle creatures with triggers: "bounce" effects. 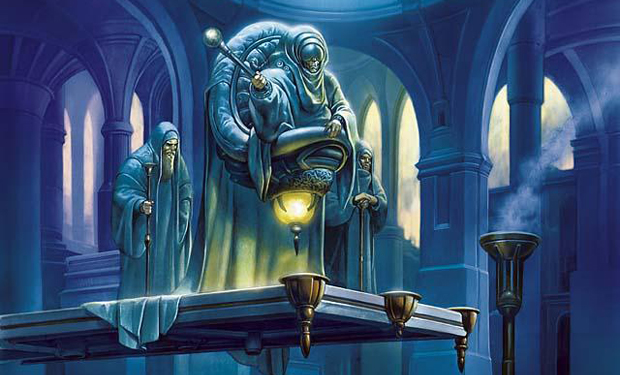 I hadn't played white-blue as a color combination for Commander in quite some time, so getting to dive into it feels good. I also wanted to provide a "Web Redemption," a la Tosh.0, to one specific white-blue legend: Grand Arbiter Augustin IV.

He speeds a white-blue deck up while taxing (slowing) everyone else, regardless of their colors. I've found him nothing short of annoying, and oftentimes very aggravating in conjunction with other taxing effects and an abundance of countermagic.

So how does he get any better here? Easy: Helvault, Cold Storage, and many of the bounce and flicker effects can excuse opponents from his effects. Basically, instead of helping me and hurting opponents, I plan to use him to help me... then send him away to avoid receiving a return volley from angry enemies. Sidestepping a political quagmire might not be easy (or entirely convincing) to others, but like my previous attempt at redemption in the Mono-You Sakashima the Impostor deck, it doesn't take long to show your friends you really are sincere about your intentions.

Trigger All the Things!

Now we have a firm idea to work with: a white-blue Commander deck that packs plenty of creatures with enters-the-battlefield abilities, and ways to make them trigger multiple times. The first thing we're going to need is creatures.

All of these options provide something upon entering the battlefield, and many of them are classics you see consistently in Commander. A few of the more obtuse choices are the diamonds in the rough here: 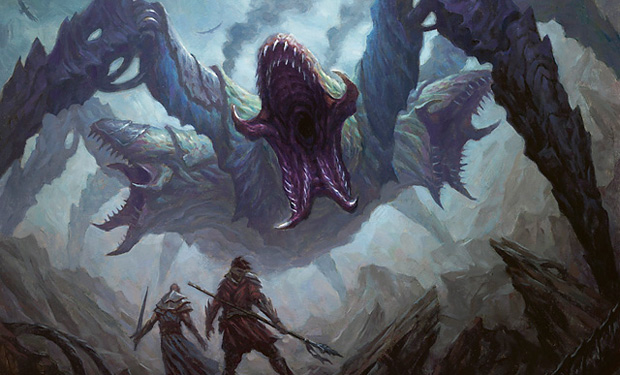 Are there more options out there? Absolutely! These are just what I had handy, and otherwise not locked up in a deck. Our community-built Ghave, Guru of Spores deck currently has blocked off some notable treasures, specifically Karmic Guide, Precursor Golem, and a bucket of other token-producing creatures. This means today's deck is completely different from that.

I like a little variety in my high-variance format!

With our creatures at hand, it's probably worth a look at things that help them out.

We've touched on many of these, and the rest are fairly self-explanatory. Granting haste, playing them as instants, and pulling them back from the graveyard all feel good and provide more triggers. Things are shaping up nicely, but there's one point I've missed so far: we need to actually destroy the Helvault to get our guys back!

There are some clever ways to do this.

Now we're getting into good stuff! Cards like Claws of Gix and Despotic Scepter resist other blue decks' usual "steal all your things" prerogative while letting us instantly dump the Helvault. A little targeted destruction gives us ways to take out an opponent's piece if we wanted, but the board-wiping power of Nevinyrral's Disk, Akroma's Vengeance, and friends probably has us covered.

The most fascinating options here are the two card-drawing spells. Getting to cash in the Helvault at instant speed and keep a few extra cards for doing it feels like just the sort of thing we should be doing.

Rounding out the deck are a plethora of familiar faces of the format.

No introductions are needed for these. They all do their jobs well, and are among the most common cards included in Commander decks. But we did run into a different problem: if you count up every card mentioned so far today the total is well in excess of one hundred without adding any basic lands.

The Line is Drawn Here!

In my excitement, I left my options uncapped. This doesn't work for Commander: the ninety-nine card requirement isn't a suggestion or minimum. So how do I trim the excess? I have a few simple ideas to help me: 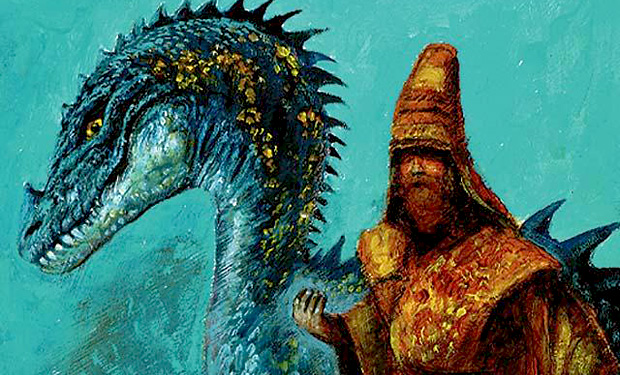 After working down everything shared, the final deck looks like this.

I'll be taking this for a spin on Magic Online sometime soon—to at least see if there's something vital not clicking—and you might be able to join in too. If you already follow me on Twitter (@the_stybs) then you know I always announce when I'm going digital with Magic. If you're there and ready, you're in too!

While I've always been keen to frequent the local shop for friends and fun, it looks like many of you aren't as interested, or don't have the convenience of a local store. I firmly believe you will find new friends, new ways to play, and all sorts of new fun by heading out to the places nearby. So here's a challenge for you:

If you're up to the task, I'm up for understanding your experience. I already know some of you might end up disappointed, but I'm supremely confident that many of you will begin to experience the awesome power of a local Magic community.

And, as a final note, if there aren't casual events or open playing times at your local store, find out if they'd consider adding them! With a little more legwork, and some local networking, you might be the budding start to a whole new way for Magic to be played in your town!

My local troupe of 30–40 (and often more!) players started as a small group meeting in one guy's house. He decided to see if a local store was willing to let them come play every week. It's become one of the most important aspects of the local Magic community, serving as the first stop for new and returning players. Everyone is always welcome, and every area should have local players ready, willing, and enjoying games of all types.

And with that, we're going to skip a poll since next week is the first week of Avacyn Restored previews. I hope you're ready to see what's inside!