in Lorwyn, there was a pleasant little place called Mosswort Bridge. You may remember it. It spawned happy little spells for you if you had many men.

But that was Lorwyn.

This is Shadowmoor. And in darkest Shadowmoor, under every bridge lives a troll.

Aren't you curious to see what kind of troll lives under a Mosswort Bridge? Because he does get very angry. And you wouldn't like him when he's angry.

All right, here goes. Here's what comes out when you break the bridge open: 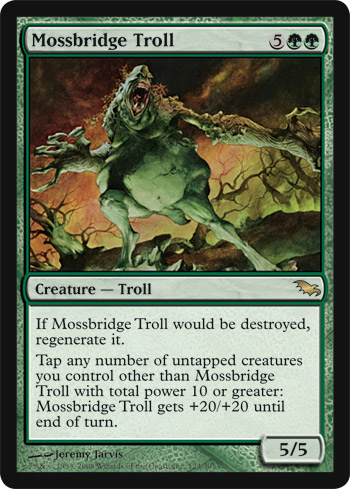 I told you he gets angry... +20/+20 worth of angry. You remember that magic number—your starting life total? Well, the Troll, if he connects, can stomp that flat in one hit. Oh, it requires some egging on from his friends to get that angry (I envision you tapping them to poke him in the side until he's so mad he can't do anything but swell up to herculean heights), but a 25/25 creature is nothing to laugh at.

'Course, the big problem is the cat macro that hovers over this fierce little beastie: NEEDS MOAR TRAMPLE. Alas, left to his own devices, the incredible rage of the Mossbridge Troll can be absorbed by a simple 1/1 regenerator!

But of course, you wouldn't play with a Mossbridge Troll and no tricks, would you? The whole point of a guy like this is to combine him with something else.

Shadow Rift comes to mind as the funniest way to kill a player ("He's whaaaaaa?"), but there are plenty of options to grant a large dude unblockability, from Protective Bubble to Whispersilk Cloak. (The good news is, you can Cloak up a Mossbridge Troll in shroud just fine—the Mossbridge Troll's ability doesn't target itself, so feel free to tap the other guys.)

Then again, there are also plenty of ways to give trample to this little dude. My love of the ancient enchantment Rancor is well-known, but in these days something like a well-timed Fistful of Force (with a little setup) or a happy activation from a Soulbright Flamekin can be backbreaking. But the real synergy comes from Overrun effects, which can turn your little 1/1s and 2/2s into big poking sticks to goad the Troll into its cyclopean frenzy!

And, of course, it's always tough to tap that many creatures on defense, so you might wanna try Dueling Grounds to make it certain that there will be no chump-blocking when you make your guy huge.

That's right—that Troll can thunder over for the game.

....Or will it? Interestingly enough, though everyone's inner Timmy will be squeeing over the ability to make it gigantor—who doesn't want to attack with something that's +20/+20?—it's the secondary clause on this that sells me on it for multiplayer. The problem is that tapping your other guys leaves you short on defense, and it's too easy to short-circuit a single large attack. The gigantic thunderousness will happen from time to time, sure, but it's not an automatic certainty. And if you have that many big dudes, why not just attack with them?

Aw, I hate to be a buzzkill to tell you that this is going to be hard to attack with. But let me clue you in on what this really is: a solid defensive multiplayer creature.

Look at that secondary clause! That means this guy, who is quite respectable in terms of size, always has a regeneration shield on him. You can't kill it in simple combat, so nobody's going to want to tangle with it on the ground. Red's targeted destruction can't destroy it unless it gets something like an Incinerateand some other spell. And so many of black's recent spells have dropped the clause "It can't be regenerated" that newer players may well be surprised when they poke the Troll and discover that it's really harder to get rid of than they think.

And the Troll is an awesome blocker indeed! It can take any hit—and even better, if you happen to have a fair amount of power lying around (which you will, because you're green), then anything that attacks will need to survive 25 damage. That's enough to absorb Darksteel Colossus attacks all day long, and it'll absolutely munch anything smaller.

A few weeks ago, I discussed how to play in a Wrath of Godless environment. And your answer? Play this. People will find it deucedly hard to kill without a Wrath of God, and they have to be wary of it. Because not only is it a good blocker, but in the right circumstances—if they tap out at the wrong time and lose the wrong man—they might also face 25/25 to the dome. Which means they'll have to play around the cards you might have, and possibly leave you alone.

The Troll is a little pricey, but for its size you'll get something that locks up the ground pretty solidly. And occasionally, just often enough that you'll be doing a little dance for weeks, you'll get to grant it +20/+20 and hear it roar.