The Way of the Warrior

Japan had a deep and meaningful philosophy shared among its samurai. That philosophy was, of course, keyworded during Kamigawa block. The end result is that the word "bushido" means "way of the warrior" to thousands of history students around the world, but to you it probably just means "Gets +X/+X when blocked."

This is a shame, since the way of the warrior is so much more than a simple triggered ability. It's a way of life—and, perhaps, a way of approaching the art of multiplayer war itself. I'm no Japanese expert, but I thought it might be interesting to take the seven tenets of the warrior's way and apply them to our favorite format in order to celebrate Warrior Week.

Let's take a look at the Seven Tenets of bushido.

Gi – Rectitude
The right decision, taken with equanimity, the right attitude, the truth

I love to talk about politics in multiplayer, using subtle mechanisms to play your opponents off against each other. But here's the truth: All the politicking in the world won't win the game unless you make the right game choices. 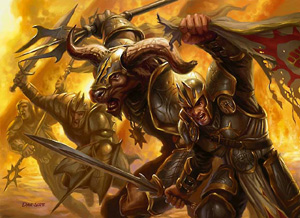 Magic is hard. Multiplayer Magic is even harder, because there are so many more factors involved. Not only do you have your own cards to deal with, but a whole table's worth of other cards, and opponents and their traditional tactics to balance. That's a lot of stuff to juggle in your head.

There are so many factors that people frequently just punt. "Eh," they shrug. "Let's just see what happens." But the problem when you play to see what happens is that frequently, you will find out. And it generally isn't pretty.

The way to win multiplayer is to consider all your options, and decide what's best for you. The correct decision isn't always easy, but made correctly it can win you the game.

For example: I was playing blue-red control with just one counterspell, a Force of Will, in hand. My friend Josh was playing a mono-red burn deck that featured a whole bunch of Earthquake-style effects.... and in fact, during that turn, he played one of them (preventing the damage to himself), bringing the entire table down to under 9 life. Since I had no life gain, I was going to go down to 2 life with no blockers.

"Don't you want to counter that?" someone asked.

Adam, if I recall correctly, went next, playing some large creature that was going to kill me the next turn. "Don't you want to counter that?" they asked.

"Maybe I have no counters in hand," I said.

Then Ian's turn came around, and he played Kokusho, the Evening Star. "Surely, you want to counter that," they said.

Ian then played Rend Flesh on his own dragon to finish me off and skyrocket his own life total upwards. Of course, that I countered. Then, the next turn, I Treachery'd Kokusho, the Evening Star and took control of it, gaining a fresh blocker while everyone else was tapped out.

"It's not gonna help," Josh said, playing another Earthquake on his main phase.

Josh scooped. He knew I had more burn to unleash on my turn.

The decisions would have been obvious to my opponents, naturally, if they knew what I had in hand. But the fact is that if I'd panicked and just countered Josh's first Earthquake for fear of going to 2, I'd still have been hurt by the Kokusho, the Evening Star and probably would have died to Josh's next Earthquake. Getting everyone low enough where they had to play defensively was the correct decision (though if Ian had played something with a sacrifice as part of its cost, I would have been toast).

The correct decision in multiplayer is often not obvious, and sometimes a pain in the butt to get right. Sometimes, you make the absolute correct decision with all the information you have at hand, and some surprise factor turns a victory into a rout.

Yet it is what you should strive for. Correct decisions in all things—what land to play, tapping the right mana, timing your strikes properly, choosing the proper targets—lead to wins.

Nagao, Bound by HonorHere's the thing: Too many multiplayer games are attended by people who sit back and do nothing. They stockpile cards, sit behind walls, and are as proactive as a piece of flint.
Those games are boring.

To be a warrior, you must actually hit. Lash out, and do your best to take people down! Committing all your resources to the table is foolhardiness, of course, but there's no shame in going down swinging. Last night, I had three people conspiring to take down my Lifeline deck, including ten-minute consultations where they all decided how they could clear the board to neutralize my Lifeline (a fact made tricky by the presence of a Wren's Run Packmaster with a championed Elf and one very protected Guardian of the Guildpact).

I lost. They had to come at me in three waves, but finally I went down. But that was heroic. The fact that they held such fear for me was like a cup of sake, warm and satisfying, knowing that I was the one who had inspired such loathing.

Sometimes I win when I enter the pole position. Sometimes I don't. But it's a lot more entertaining than sitting like a lump. 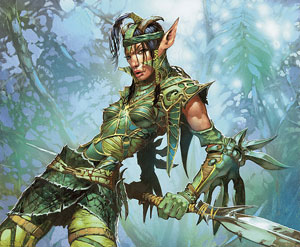 You know what you should love? Your creatures.

Too many bad players make horrible trades in combat, chumping a 5/5 with a 2/2 when they're at 20 life. You're at 20, my friend; take a punch or two! It's okay! And it keeps that guy on the board for when you draw your Armadillo Cloak!

Your creatures are beautiful and unique snowflakes. Do not make their sacrifice meaningless.

Likewise, when you attack, make sure these beautiful creatures will not die for no reason. Have you looked at everything the other player has? I know it's difficult, especially when you each have four men on the ground, but try to switch the tables and decide what your worst nightmare would be if you were the one declaring blockers. Mark every active effect he has, the kinds of spells he's likely to play... and then make your decision.

Every attack should be a net bonus. If you're just attacking because you can, well, you're slaughtering precious creatures for no reason, sending them to their deaths and gaining nothing from it. How callous is that? Have some compassion.

And lastly, think seriously about whether you want to bring a new-born babe into the world. Yes, it's cool that you have four guys out already, but aren't they all just waiting for a Wrath of God to wipe them all out? Maybe it's just not the time to bring this beautiful, beautiful Faerie into the world. Maybe it's too dangerous out there. Perhaps you want to wait until the storm is passed, then play this butterfly-winged beauty during calmer times. 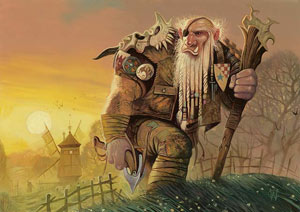 When one plays, one plays to crush the others underfoot. But one does not rub it in.

Yes, you will inevitably take advantage of someone else's poor play during the course of a prolonged match. They will forget about a card on the table, or stumble into a trap you set for them, or maybe just forget to use an effect that could have saved them.

You may even point this out. But you never mock.

Likewise, there will be times when the player to your right makes an absolutely bozo decision, and decides to attack you instead of the person who's actually going to kill him the next turn. You will do your best to bite back acidic comments, to avoid whining that he's picking on you, to merely take your beatings with grace and courtesy.

Sometimes, players pick the wrong target. Sometimes, they have a deeper strategy in mind and in fact, the person you think is going to kill them isn't really a problem at all. It's hard to know which is which until the dust settles, and even then you may not play everyone's game for them.

So smile. Be nice. Play nice.

(Incidentally, this is the one I struggle the most with. Especially when I'm the target and someone else is going to win over my dead body. Grr.)

But I am always honest about lying.

It's a strange paradox, but I make no bones about the fact that whatever I say may or may not be truthful. If you're just starting out as a player, I will give genuinely useful advice, but if you've been around the block then I will try to deceive you.

But everyone knows this. If they fall to one of my spurious mistruths, well, they knew who they were dealing with. They don't get mad at me for it.

Nagao, Bound by HonorIf I make a bargain, I keep it. Should I tell you that I won't attack you next turn, I won't. Should I reassure you, "Oh, this deck has no counterspells" so that you won't attack me, and I forgot that I dropped in a Time Stop last week, then I will not play the Time Stop when I draw it.

I do my best to be a man of honor within the ground I have chosen. 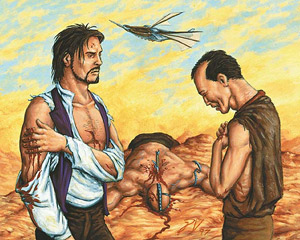 For all of the talk about fighting, these people at the table are not your enemies. At worst, they are strangers you've just met; at best, they are your best friends, here to share enjoyment with.

This is not a real battle. This is Wile E. Coyote punching in at the beginning of the day to fight Sam the Sheepdog, spending the next eight hours trying to steal sheep, and then leaving.

These men and women are your greatest priority. They are the people who make the game fun, and you should do your best to be loyal to them. Lend them cards to help them out. Lend them some fries when they're hungry. Lend them support when they're down. Lend them your ear when they need it.

Magic, if tended properly, can lead to more than just 5–1 victories and spectacular combos. It can lead to lifelong friendships... and in fact, that's precisely what you should be hoping for. To do that, you must be brave and true and good.