mana is becoming something of a threshold in multiplayer Magic. Akroma, Angel of Wrath is arguably the most fearsome creature in the game. (Some might prefer Verdant Force, which also costs eight.) Massive, game-changing effects like Insurrection and Reiver Demon come out for the same converted mana cost.

And most importantly for purposes of this article, Biorhythm, a green Onslaught rare, does some fairly drastic life-tinkering for eight as well.

Why bring this up? Well, once this next card is released, group players may want to pay particular attention to the white mage closing in on eight lands. 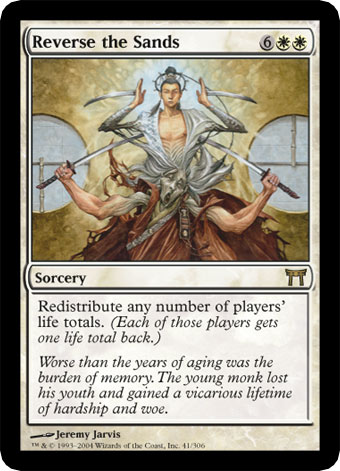 I am at once impressed and repulsed by this card. Therefore, I'm glad it's in the set – Wizards staff get paid good money to come up with innovative ideas that confuse the heck out of us.

First, what I don't like about it: it punishes players who are successful in the early and mid-game. That's the only negative, but I don't want to undersell how much that annoys me. Early and mid-game plays are the foundation of my multiplayer philosophy: I believe players should get out strong early threats, back them up with powerful instants, and bully the board into gradual submission. This card lets the white mage do nothing for eight turns except lay down land…and then reverse a life total of 20 to 1 (not including other players caught in the mix). I guarantee you I'll be cursing this card at least a dozen times before the end of the calendar year. And I know exactly which three players in our group are going to play it. Jerks.

The irony here is, I'll be one of those three jerks. Why? The card is amazing! Here’s (at least) six reasons why.

1) It's an obvious multiplayer card in a rare slot. I'm going to enjoy watching tournament player after tournament player do up set reviews of Champions where they whine…"why did Wizards do this?...it's unplayable!...I can't believe I got this in sealed deck!...what a trash rare!..." etc. etc., ad nauseum. It's always a thrill to watch these folks get dizzy as the world stops spinning around them. So even before I think about the strategic possibilities, I gotta give it points.

2) It has a big, memorable, game-changing effect. It's hard not to like a card that can really impact the game. Part of the fun of playing Magic is remembering old games where amazing things happened. Several years from now, some small group out there will be reminiscing around a kitchen table about the time so-and-so drained about 80 points of life across four players and gave it to four others who thought they were dead meat. It's all the better because Reverse the Sands isn't always guaranteed that effect (e.g., everyone's sitting between five and ten life) – so when it happens big, it should be pretty cool.

3) It's life gain with a purpose. Why doesn't Consume Spirit bother me as much as Congregate? Because the life gain in Consume Spirit happens at the same time that someone's actually doing something to move the game forward. Bottle Gnomes, Spike Feeder, Exalted Angel – these are all cards that can serve as a path to victory, and also happen to gain you life. Reverse the Sands can do the same thing – it can shake up comfortable board positions, make people reassess threats, and put new players dangerously close to death.

4) It's a beast in team play. While the card may appear random to some group fanatics, it's actually a powerful and precise tool in team play. And as much as I love chaos multiplayer, I love team multiplayer even more. In the past, I've openly lobbied Wizards in this space to consider sanctioning certain team formats. I honestly don't know if I've had any impact – but when I see multiplayer rules form and Wizards come out with cards with obvious and specific power in team play…well, I'm just enjoying the trend, and I'll leave it at that.

5) It can punish life gain. Don't make the mistake of thinking this is a dumb life gain card. Much like Biorhythm before it, Reverse the Sands waits until that annoying life-gain mage is smirking behind 732 life while everyone else is at less than 5…and then pulls a whammy on them. Short of a Counterspell, there's darn little the white mage can do…what, play Congregate in response? Whatever. There'll still be some poor sap with 3 life at the table, and everyone's dying to see the life gain mage inherit that particular heirloom.

6) It helps fill a power gap. White's effects in multiplayer for the past few years haven't emerged much beyond variations on Wrath of God. (Akroma and Glory are important exceptions. In my Multiplayer Card Hall of Fame, white ends up the least impressive of the colors, mainly because it provides good utility (e.g., damage prevention) – but not a lot of exciting options. Reverse the Sands is an interesting, unusual, powerful multiplayer effect for white. That's a good thing for Magic.

My first deck fragment will build off of a "fortress-style" deck I created when Form of the Dragon came out. What a wonderful synergy Reverse the Sands has with Form of the Dragon! You dole out life totals of 5 for as long as you can keep the magic going.

And how cool will it be to Reverse the Sands on someone when you're at 0 life and still in the game? Platinum Angel does that for you. The fragment here is just a small corner of what can become a very complicated but fun "Johnny" deck:

Another deck fragment builds on the idea of risking mana burn. This strategy feels a bit slimy to me; but I might get over it. It does, after all, pose significant risks for the player who tries it. It also offers a way to accelerate to the

mana cost. I threw in the Lattice-Glissa combo for control purposes; but there are certainly other options:

Even better at instant speed!

Let's not forget an interesting gem from Fifth Dawn: Vedalken Orrery. As startling as Reverse the Sands can be at sorcery speed, it's even more dramatic when done at the end of your last opponent's turn. This particular fragment has nasty mana requirements when blended with a

spell; but you could pick either the red or black elements alone and still have a nice start:

Finally, as I mentioned above, the true power of this spell will lie in team play. That's because in a chaos game, the law of averages will occasionally force you to give high life totals to players you'd rather deny. But in a team game, you can be virtually certain that every time, all of the players you want to succeed will be doing as well or better than all the players you don't want to succeed.

I've swallowed my distaste of life-gain decks for long enough to propose an Emperor deck fragment that can build obscene life totals, and then redistribute via Reverse the Sands to shore up a lieutenant or two. After all, if you put one flank at 100+ life, they can probably attack without worrying much about keeping back blockers:

Time for some thoughts on countermeasures. This is, after all, an interesting spell to consider – not many decks will be ready for it. What can a group do if Reverse the Sands begins to dominate?

White has the easiest time of the five colors, since it's most able to defend even a small life total with damage prevention and protection. It can also play its own Reverse the Sands, if worst comes to worst.

Green can recover from a bad life-trade with Wellwisher or similar means, of course. But I like a more proactive approach for this color. Keep the life totals fairly even with a few well-timed attacks, and then alpha-strike a player (it doesn't even have to be the white mage) with an Overrun or similar trampling means. If you kill players at 10 or more life with devastating, one-off attacks, Reverse the Sands will lose its charm.

Red has to think similarly to green, but with distributable damage. After all, who does it better? Replace your sorcery-speed Fireballs and Arc Lightnings with stuff like Ghitu Fire and Arc Mage. In response to a Reverse the Sands, try to put everyone on as even a keel as possible. Another card that works well for reducing large disparities in life is Pulse of the Forge.

Black doesn't damage as effortlessly and speedily as red, and it doesn't alpha-strike as convincingly as green (though its ample removal and cards like Dark Triumph probably would help any black-green deck). What black does have is Phage the Untouchable, who might come back from retirement and remind your group the difference between toying with life totals and actually winning. Black can also recover from a bad Reverse pretty well with stuff like Syphon Soul.

Blue has the ever-present Counterspell, and that's about it. Count this as one of the reasons why countermagic is tricky in multiplayer – you want to save it for the true threats, and Reverse the Sands probably qualifies at least half the time. Don't panic and play Counterspell unless you see one or two really horrific life totals on the table – sometimes, a spell like Reverse the Sands works to the advantage of a blue mage, for the same reasons white likes it: it works against those aggressive mages who haven't quite gotten the job done yet.

And as for those aggressive mages: friends, keep your eyes open. As I suggested from the start, counting lands just became more important. It's a good habit to pick up anyway, and it keeps you focused on your opponents' capabilities. So you might become a better player. That might be the best reason of all to respect this card in casual play.