This Week: A Very Special Blossom

Known fairly well by seasoned players, the Wall of Blossoms enjoys that rare reputation as a strong card in virtually every format where it's played. Constructed Pro Tour Qualifiers, seven-player free-for-alls, multi-block drafts – no matter how or where you play it, Wall of Blossoms works. For an 0/4 wall, that's not bad at all.

The key, of course, is the extra card. Combined with a cheap cost and a decent defense, Wall of Blossoms could find a role in any deck playing green. It has been particularly popular in Aluren-style decks as a way to draw lots of cards.

Just a few months ago, Wizards updated Wall of Blossoms with a Saviors uncommon: Haru-Onna. As a 2/1 for four mana, it seemed to tell the Magic world: "Wizards will give you a new Wall of Blossoms – a reusable one, with two power! But it will cost you 2 more to play, and you'll lose the defense." It seemed like an okay trade, though Haru-Onna is unlikely to get as widespread use as its predecessor.

Now comes the real successor, a mere one expansion later: 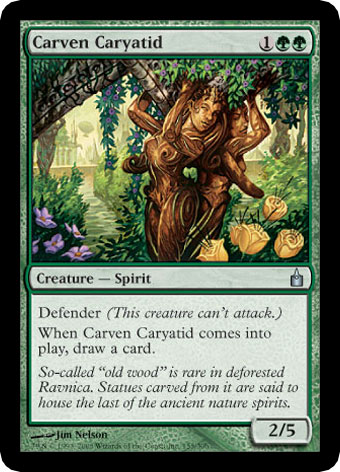 I know what you're thinking. Really, it's the only question any decent Magic player can have after seeing a card like this:

Ah, ye of faint memory. Spin your wee heads back to Urza's block, when "sleeper" enchantments like Opal Caryatid ruled the day. We asked this question back then, I'm sure; and if someone was paying attention, they gave an answer something like this:

Heck if I know.

Then someone else looked it up in a dictionary, where they found lots of useful information about carvacrol (C10H14O!) and caryopsis (which sent them on a brief digression to refresh their sense of what "indehiscent" means) before learning that a caryatid is a "draped female figure supporting an entablature."

And an "entablature", as we all know, is "a classic architectural feature that rests on top of a column."

What You Get For That Extra

in Magic – at least between the second and third turns – will apparently buy you the following:

While tournament players work out whether that bargain is worth it, let me give some advice to those of you who indulge in multiplayer formats: Carven Caryatid will be better for you, at least two-thirds of the time, than Wall of Blossoms.

There are three reasons why. First, the two power will do a great deal to scare away potential attackers. Take an extreme example: if you have a Ball Lightning, why would you run into a 2/5 treehouse and trample over for one, when you could smack someone for six? To kill the statue? It already replaced itself on the draw. In less extreme examples, the math is even better. All sorts of things, from Withered Wretches to Viashino Sandstalkers, just plain stay home against the Caryatid.

Third, with Sakura-Tribe Elders now an almost auto-include in any green deck, you already have your two-casting-cost "Wall of Blossoms" accounted for. It's the snake. (Yay snakes!) The Snake can block, get you a land card, and thin your deck. On your third turn, if you don't have a four-drop (or fourth land) ready, you know the Caryatid can still come down, making the most efficient use of your mana while you increase the chances of getting that four-drop or fourth land.

I'll set up a deck fragment with lots of flexibility in it for other ideas and win conditions; it really doesn't matter what you finish the deck with. How do you not get any reasonable play you want by turn four?

Yes, the benefits I've listed above take an additional turn to show up, when compared to the Wall of Blossoms. But while many players do underestimate those early multiplayer game turns, there are very few evils befalling you on turns one and two that a self-replacing 2/5 pillar on turn three can't help out with.

The "Type" Of Thing You Might Not Notice Immediately

And after all of that, Carven Caryatid is a spirit – no small thing in the wake of Kamigawa block. When you consider the possibilities (and I'm not going to get into here, because that's a well-worn path), even a mundane deck can get a nice boost:

There's a lot more deck-building space than this in the "spiritcraft" mechanic – do a quick search for the phrase "spirit or arcane" in Gatherer (or any fragment of the phrase "whenever you play a spirit or arcane spell…") and take a look at the cards there. Each has the potential for some interesting combinations.

Of all the alternative, non-sanctioned formats out there, some of the most time-intensive are those based on artwork. I don't mean artist – those names are searchable in most databases – I mean artwork.

Try a format where every card must have an aircraft in the artwork – but to make it challenging (and push people away from mono-blue), ban flying. (No flying creatures allowed, and ignore abilities that bestow flying.)

What's the bomb in this format? That's right – Carven Caryatid! There's a dirigible in the distant background. Perhaps it's transporting carvacrol to a wholesaler.

I have no idea how many other cards represent aircraft without mentioning flying – but here's a start, if you want to give this format a whirl. If it gets too tough, allow the creatures with flying – but be ready for a heck of an anti-flying metagame featuring Predator, Flagship.

You'll notice none of the three deck fragment ideas require heaps of rares. Since the Caryatid is itself an uncommon, that means you can do an awful lot with it, without spending lots of money.

Good card. Works in tons of formats. Fairly easy to acquire. Yep folks, I like this one! And you should too. Make this a staple in your green decks!

The Format Beats On

Turning to our blossoming alternate format, we have a showdown:

None of the options made it to 25 percent, so we'll run it off.

Personally, I was rooting for the other-opponent's-library option – but it's clearly not a fan favorite! So we'll drop that one and the "in play/graveyard" option, both of which received less than their "fair share" of 16 or so percent (one-sixth of 100 percent).

I do not expect to have another runoff for this.

Just to keep folks updated, here's the format to date:

As you can see from the last line, we have a result from the second poll last week as well. That poll mistakenly had a blank option, so posting results isn't really worth it. More than half of the over 2,000 respondents still chose the option I would have – the spell's controller maintains control. So we're going with that.

Catch you next week with another Ravnica preview, and more progress on the new format!

Anthony has been playing multiple Magic formats for several years, and has been writing for much longer than that. His young adult fantasy novel JENNIFER SCALES AND THE ANCIENT FURNACE, co-written with wife MaryJanice Davidson and published by Berkley Books, is available now.