Welcome to the Bash

his is the obvious: it's Rakdos Week and the "last week" of articles in 2012 for me. There are going to be a few surprises over the two-week break, and Gatecrash previews will begin firing on New Year's Eve. These are great reasons to throw a party.

"Members of Rakdos are driven by a desire to entertain themselves and they don't care who they hurt along the way."
—A Planeswalker's Guide to Ravnica: The Cult of Rakdos

I play a lot of Commander. It's the way to play that delights me the most. I get the power and randomness of Cube, the social action of multiplayer, and the pride of packing my coolest cards, all in one shot. I've written about "the Social Contract," using all commons, and using mostly commons and uncommons. I even created a database for around seventy submitted decks. 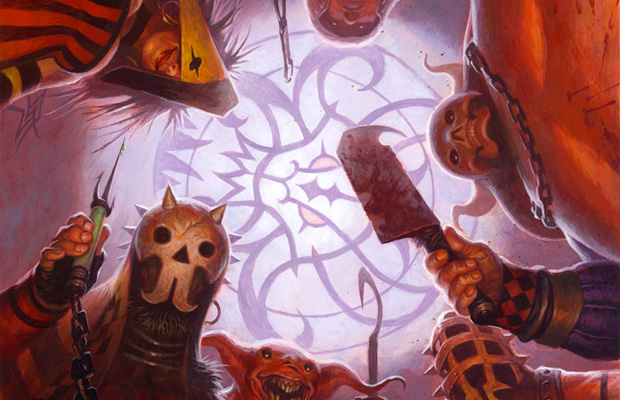 So in the spirit of Rakdos I'm going to do whatever the hell I want this week. It's my party, so sit tight and join in the fun.

Commander, and multiplayer games in general, often take too damn long. While I love hanging with buddies, I want to play more than two games over the course of four hours. I can squeeze three games and a deck-building session into Limited lunch. One game bleeding longer than an extended cut of Lord of the Rings is unacceptable to me.

There's a peculiar kind of Commander player I often avoid but actually enjoy more than I've admitted. This player packs the heat, brings the missiles to a gun fight, and detonates action faster than a Michael Bay film. He or she has decks build around Kaervek the Merciless; Heartless Hidetsugu; and Maga, Traitor to Mortals. This player channels the fury and passion of Rakdos, and whether you like it or not you're along for the ride. That ride is always quick, one way or another.

I want to tap into that primal glee and just watch the world burn.

Speeding games up while doing what I've secretly wanted to do for a while is just the type of passionate exhibition Rakdos would approve. In fact, he'd demand it and provide suggestions for "improvement."

What do I mean? 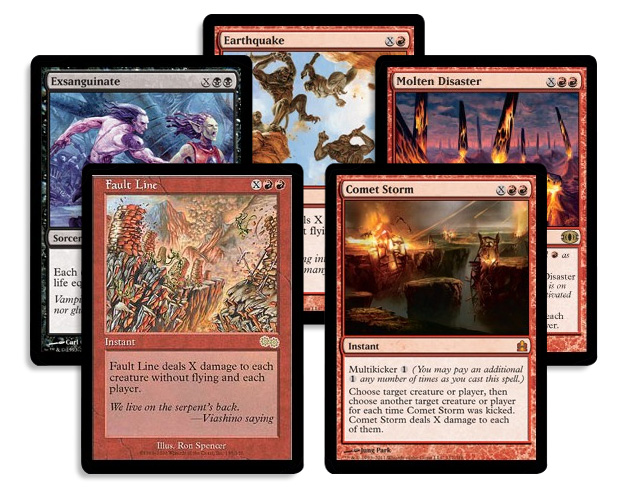 I mean going big to send everybody home. Earthquake is the classic example, but modern riffs like Molten Disaster and Comet Storm are twists that I enjoy. Exsanguinate is now a staple in "Urborg, Tomb of Yawgmoth plus Cabal Coffers" decks, but you don't need only black mana to make it worth casting (unlike its distant cousins Consume Spirit and Drain Life). 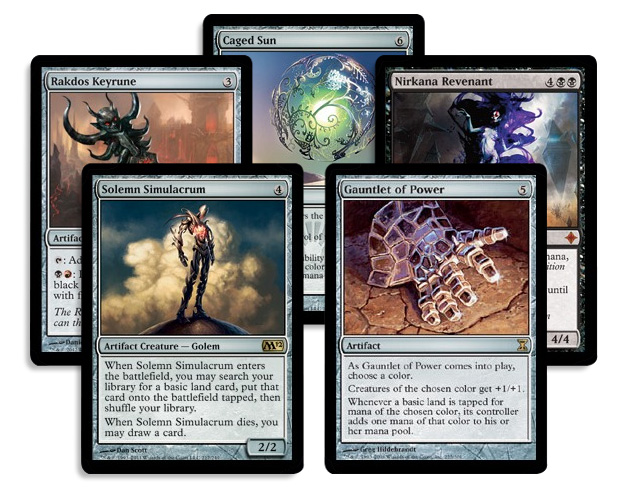 Making all that mana can be easy. While Nirkana Revenant and Caged Sun let us double up on a color, Solemn Simulacrum and Rakdos Keyrune are the grease that makes the wheels turn easily. Making as much mana as possible will empower a lot of big things. 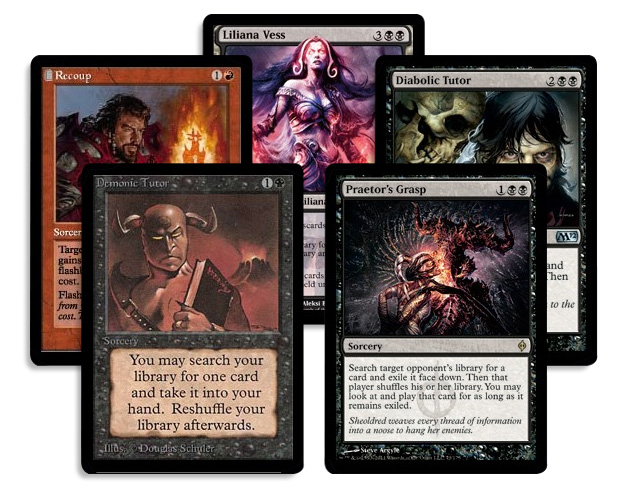 When we're throwing our own party it makes sense to have favors. Depending upon who shows up and what we come across during the game, going out to find something special is awfully generous. Liliana Vess is an expert at getting what she wants, but Diabolic Tutor and Demonic Tutor are the eBay and Amazon of our deck. 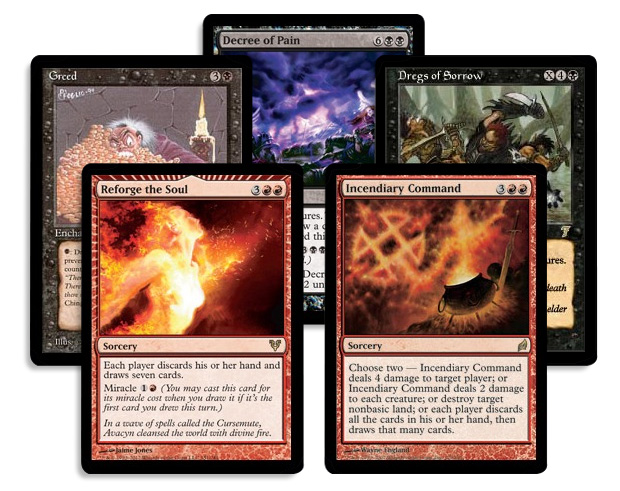 I enjoy having things to do at parties. As the host, including ways to keep our hand full of fun is a sharp move. That way, we'll always have something more to share. Incendiary Command and Reforge the Soul has everyone join in on the fun, but a well-timed Dregs of Sorrow or Decree of Pain is more powerful. 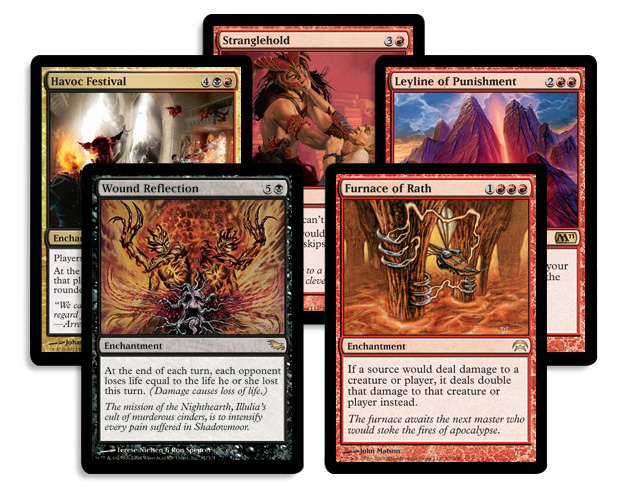 No party is complete without bowls of punch. We're going to serve real punches instead. Havoc Festival and Wound Reflection is a potent one-two, but Stranglehold, Furnace of Rath, and Leyline of Punishment are all equally painful for our friends. 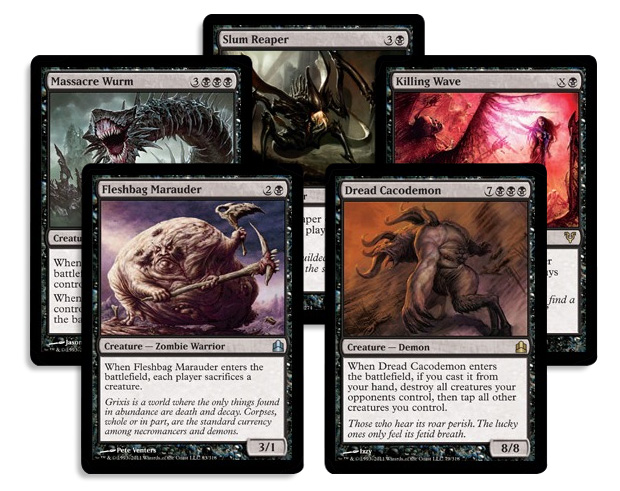 Perhaps the most interesting party game is present in every game of Magic: Red Rover. The goal is simple: one team sends in somebody to break through the other team's line. For Magic, I like to shortcut this by taking out anyone who can be on an opposing team. Slum Reaper and Fleshbag Marauder are quick ways to take out one blocker, but Killing Wave and Dread Cacodemoncan make entire teams vanish. 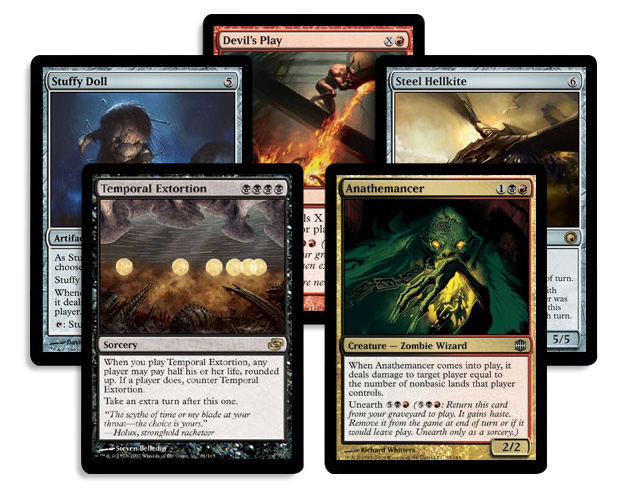 While inviting everyone to a party is fair game, there are times when someone special should show up. Cards like Stuffy Doll and Anathemancer can highlight someone deserving. Steel Hellkite and Devil's Play lay down a red carpet for the stars.

1 Liliana Vess 1 Liliana of the Veil

This is mild for a Rakdos party, but you catch the drift: Draw cards, deal damage, and don't stop the music. Dealing 120 points of damage or more—that is, the life of three other Commander players—gets easier when I can spend

to hit all of them at once. Refilling my hand while occasionally emptying out theirs isn't nice, but it's all part of the show.

Also, a random indestructible creature like Myojin of Night's Reach is pretty handy from time to time, and most of our burn hits us too. We're not above our own party favors.

Why am I passionate enough about the speed of games to build a burn-based Commander deck? Pace of play is important to having fun. There are some players who are prone to "tank"—stop, think, and calculate their next actions—in every game they play.

I know this as I do it in Commander too often.

Whether I chalk it up as habit from my more competitive Cube-playing or an unfortunate side effect of handling the volume of information Commander games present, the fact remains that I find games take longer and I'm contributing to it. Players with powerful decks and plentiful choices are prone to taking time, and that's why I actively looks for ways to keep things moving.

For example, Eric Klug is not only the player who introduced me to Cube but the biggest fan of Goblin Game there ever will be.

1 Chandra, the Firebrand 1 Koth of the Hammer 1 Chandra Nalaar

1 Solemn Simulacrum 1 Gauntlet of Might 1 Furnace of Rath 1 Manabarbs 1 Ruination 1 Thran Dynamo 1 Chandra, the Firebrand 1 Koth of the Hammer

I've played many games with Eric, both Cube and Commander. While I find Cube satisfying for a number of reasons, it's the dynamic games he creates in Commander that keep me coming back for me. Yes, his deck is brutal. But games move faster and keep people interested. Even if Eric went down early, the damage—as it stood—was already done, and the remaining players with aggressive inclinations could take advantage of the chaos.

Eric's pride and joy, Goblin Game, deals a surprising amount of damage and required physical objects to be hidden. It's one of the many cards in his deck that leads him toward dealing damage, but it is still genuine multiplayer fun for everyone in the game.

Eric knows he wields a glass cannon, but his aim is impeccable. But he's also not the only one with damage on his mind.

1 Butcher of Malakir 1 Chancellor of the Dross

Organized Play Manager—that is, Pro Tour ringleader—Scott Larabee is a Commander aficionado. When I shared a moment of Zen from Seattle, it was Scott who was on the receiving end of my value train. (Maelstrom Wanderer is, as they say, good.) What I saw from his battlefield was a sweet Rakdos, Lord of Riots masterpiece, filled with explosive action and direct damage. Unlike Eric's deck, Scott's packs a punch with more creatures and traditional Commander effects.

Unlike either Eric's or my deck above, Scott's is dialed into consistent pressure and over the top effects. Rakdos, Lord of Riots loves having a few friends join the festivities.

A Whole Lot of Not Caring

Just like we're all individuals with different perspectives, how we handle ourselves in multiplayer games is on a wide spectrum. It's easy to believe there's one, true way to engage other players, but it's more personal preference than textbook analysis.

The spirit of celebrating with Rakdos isn't about defining the right way to do something, but ensuring whatever you do is something you enjoy—consequences be damned. Blow up the world, throw down the damage, and create chaos out of order if that's what you want. If everyone chose to play the same way games would be boring.

Just don't be surprised or offended if others avoid playing a role in your carnival. 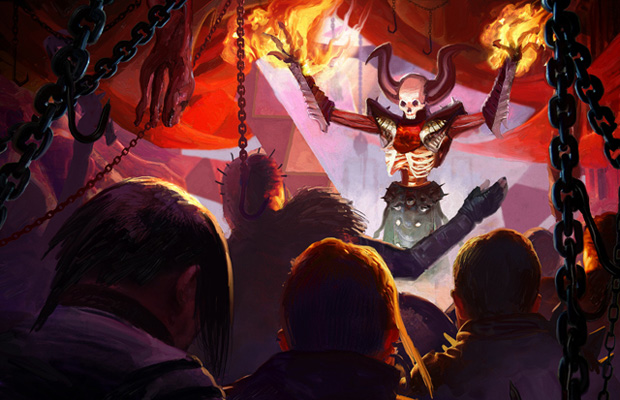 Since this is the last article from me for 2012, I wanted to take just a few moments to share some thanks:

Whether we agree or not about a topic at hand, each one of you is awesome. I can't wait to get started fresh with Gatecrash previews in a few weeks, and follow up on the biggest project I've ever committed to Serious Fun.

Which project is that? Check back in two weeks for the first piece again. It's the best rerun article you'll find. Have a great year end, and I'll see you in January!