aybe I'm showing my age here, but today's preview card makes me think of Jurassic Park. No, it's not because it's a dinosaur, although my extra bonus preview card kind of looks like one.

It reminds me of a particular scene in Jurassic Park, when one character notices a strange, periodic ripple in a glass of water. Each ripple is accompanied by a reverberating thump that's imperceptible to begin with but gets louder each time. It's a sublime moment of mounting dread, and the take-home point is this:

Steven Spielberg is a flippin' genius.

Something big is coming.

There are moments like that in Magic. When your friend draws a card and a big, nasty grin spreads across his face. When she starts counting up all her creatures' power and keeps adding 3 for some reason. When he starts tapping lands and just doesn't stop—five, six, seven, eight! What costs eight?!

There's a certain feeling you get at times like that. It feels a little something like this: 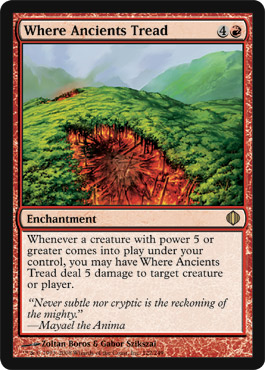 In the past—as recently as, say, last week—you've seen the "something big" previewed in this column. This time, I've got the rare treat of previewing the tremor that precedes it.

Incidentally, I love this card's name. It's unique, it's evocative, and, much like Ravnica's Izzet guild, it's destined to lead to Abbott and Costello style misunderstandings for years to come. ("Do you know Where Ancients Tread?" "No, where?")

Where Ancients Tread does nothing to begin with. You play it, and it sits there. It's the ripple in the glass; harmless in itself, but foreshadowing looming terrors.

Something big is coming. And you're in its way.

The plane of Alara, in case you've been hiding away under a Spinerock Knoll for the last few weeks, was long ago split into five separate planes called shards. Each shard has only three of the five colors of mana, and centuries of divergent evolution have made them very different places indeed. Every card in Shards of Alara is from one of the five shards, and each shard has a distinct mechanical theme.

So where do ancients tread?

The answer is the red-green-white shard-plane of Naya (although I'd give partial credit for "wherever they want to"). The verdant jungles of Naya are home to the gargantua, ancient beasts of immense size and power that are worshiped as gods by many Nayans.

Of course, the cool thing about this mechanical theme is that you don't have to be running a dedicated Naya deck to take advantage of it. Magic has over 500 creatures with power 5 or greater, any of which will trigger Where Ancients Tread and earn all the other benefits that Naya offers the enormous. The Nayans aren't picky; any fatty will do. And Where Ancients Tread, like many of the other "5 power matters" cards, is easily playable in anything from mono-red to five-color (and hey, every five-color creature other than Scion of the Ur-Dragon and Transguild Courier will trigger it).

So you've played Where Ancients Tread, the tremor before the avalanche. Your opponents have got to be wondering: what happens next?

At five mana, Where Ancients Tread is perfectly poised to come down the turn before the fatty parade really gets rolling. Slam it down on turn five (or whenever your deck gets to five mana, which is quite likely to be sooner), and on your next turn you can lay a land and start dropping some ten-ton weights.

Six mana is a sweet spot for fat creatures. The humble Craw Wurm and its red counterpart Axegrinder Giant cost six mana, as do a fair number of other commons, from Moss Kami to Lairwatch Giant to Ronom Serpent. Moving up the rarity chain, six mana for 5 power (and usually 5 toughness) is an iconic set of stats, from Mahamoti Djinn to Necrosavant to Visara the Dreadful and on to more recent additions, such as Midnight Banshee, Twilight Shepherd, Oona, Queen of the Fae, and Shards of Alara's Bull Cerodon: 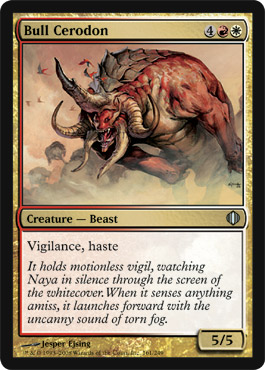 (You may find yourself wondering what a "cerodon" is. The answer? It is awesome.)

Six mana gets you any of the 6/6 Lorwyn Incarnations, such as Hostility, or any of the 5/5 Kamigawa Dragons, such as Ryusei, the Falling Star. Dragons like Ryusei, the Falling Star have a particular tendency to cluster at six mana for 5/5 or better, from Shivan Dragon to the Shards of Alara-friendly three-color Invasion dragons like Rith, the Awakener to Onslaught standout Rorix Bladewing.

So no, there's nothing wrong with curving up to good honest fatties in the six-slot. And unlike the previous major player in the "doling out pain when fatties come into play" market, Pandemonium, Where Ancients Tread offers an exclusive contract for your creatures and your creatures only, so that turn of waiting isn't going to suddenly get ugly when one of your opponents turns out to have two Ball Lightnings in hand. Well, okay, that would still be ugly, but not nearly as ugly as if you had Pandemonium in play.

Moving up to seven mana and beyond, you'll find that most creatures hit the mark, including four of the five Shadowmoor "hideaway" creatures (such as Knollspine Dragon), Blazing Archon, and, oh right, my second preview card, the premium foil rare from the Naya intro pack: 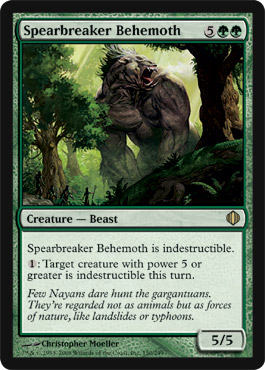 What a beater! Being indestructible doesn't solve all a fatty's problems, but it sure doesn't hurt.

Not all fatties are monsters on your mana. Where Ancients Tread doesn't care what's on the back end of that 5 power, whether it's an unimpressive toughness or an unfortunate drawback, and that means that you can dole out 5-point smacks on the cheap.

If Craw Wurm is humble, Dross Crocodile must actually be groveling... but it'll still trigger Where Ancients Tread. There are creatures sporting "Juggernaut" stats down at three or four mana, including Avatar of Discord, Earwig Squad (conditionally), and, um, Juggernaut. You'll also find the occasional bargain-bin monster of legitimately huge size, usually multicolored, like Spiritmonger or Rumbling Slum.

If you're willing to put up with potentially serious drawbacks, there are cheap fatties ready to spring into action, from Phyrexian Negator to Plague Sliver to Sheltering Ancient. And Where Ancients Tread doesn't care how long your new friend sticks around, so you can trigger it with Force of Savagery, Ball Lightning, Waning Wurm, or an evoked Spitebellows (ooh, I like that one!). You'll also find some very reasonable creatures that conditionally have power 5 or greater, like Horde of Boggarts and Scion of the Wild.

What's the big deal about cheap fatties if you already spent five mana on Where Ancients Tread? It's not a big thing, but it couldn't hurt to land two big creatures in one turn, or follow up Where Ancients Tread with a fatty all in the same turn later in the game. Even failing that, there's always the chance you won't have the sixth land (or don't want to pack your deck too full of six-drops).

Of course, if you really want to double up, you could always play two Where Ancients Tread, letting you spread 10 damage around in two big chunks whenever you play a fatty. And if you've got lots of creatures that almost get there, you can always toss in Gaea's Anthem or Glorious Anthem, both conveniently in Naya colors.

One thing you can't do, unlike with Pandemonium, is "cheat" a creature's power higher after it comes into play. The creature has to already have power 5 or greater as it comes into play, so Primal Forcemage and Llanowar Reborn can't help you. But effects that apply as the creature comes into play are fair game, so Sunrise Sovereign will let Giant Harbinger trigger Where Ancients Tread, and a Bramblewood Paragon or Gaea's Anthem would push Game-Trail Changeling over the top.

That makes Naya's mechanical theme a great fit with the devour mechanic that Mark Rosewater previewed yesterday. Devour is the signature mechanic of the black-green-red shard of Jund, but as long as you don't mind mixing shards (as some storyline enthusiasts very well might), devour and Naya's theme are a great fit. Take a look at these two cards:

Neither of them naturally has power 5 or greater, but if you sacrifice a creature or two, they'll come into play with enough counters to trigger Where Ancients Tread.

When I'm playing a deck that wants nothing more than to lay down fatties turn after turn, I worry about one thing: an empty hand. Spot removal and even mass removal don't faze me, as long as I've got plenty of mana and a grip full of fat creatures at the ready. That's why drawing cards with green mana is one of my favorite things in Magic; it means that I can restock my hand without dipping into blue, which doesn't contribute much in the creature department.

The great thing about Where Ancients Tread is that every big creature you draw comes with a free 5-point Blaze. The less great thing may become apparent when you've got Where Ancients Tread in play and the only sound you hear is the chirping of the crickets that are cavorting through your hand full of lands. These things happen, and ripping off the top is part of the joy of Magic—just ask my personal nemesis, Sage Owl—but the prospect of such a big reward for pumping out big creatures gets the wheels in my brain turning.

You could repeatedly trigger Where Ancients Tread by playing a fatty that returns itself (or others) to your hand, like Sparkcaster, Oni of Wild Places, or Stampeding Wildebeests (or its non-union Kamigawan equivalent, Stampeding Serow). You could also pair a nice big creature with cards like Vedalken Mastermind or Mark of Eviction. Alternately, you could get a big creature popping in and out of play with Momentary Blink, Mistmeadow Witch, or Flickerform. (I'll leave Norin the Wary + three Bramblewood Paragons as an exercise for those who prefer their science a little on the mad side.)

Of course, you may notice that the above shenanigans all involve some degree of not having your big creature actually stomping around in play, which might sound a little counterproductive. Instead, you might just make sure to restock on creatures with Wild Pair, Regal Force, Cream of the Crop, Mindmoil, or Primordial Sage (assuming you can forgive the Sage for its oh-so-close 4/5 body).

If all of that sounds like too much work, you could always just find a way of repeatedly pumping out fatties to trigger Where Ancients Tread. Dragon Roost is tailor-made for this, as are Eventide retrace spells Call the Skybreaker and Spitting Image.

And even better, there's another Naya card in Shards of Alara that... well, let's just say you'll know it when you see it.