I will take it from here.

You know me, of course. Some label me a villain, as if it is wrong to seek victory at all costs, as if weakness is a virtue. Let them carry on with their pathetic moralizing—it costs me nothing. What they call villainy is no more than the will to win by any means available. I make no apologies.

I am here today to tell you what your Mr. Digges, out of some delicate sensibility I do not share, refuses to: how to win.

The more devious among you, such as you are, might wonder why I would share millennia of wisdom with those who might turn it against me. It is not out of any sense of fairness or charity, I assure you, nor any desire for recognition or acclaim; I have none of these. But neither do I harbor any fear that these secrets will one day prove my undoing. First, and most obviously: I do not play games. Second: were you to face me, you would need more than a few hundred words of strategy advice to prove my equal.

As for what is in it for me .... Let us say that Mr. Digges now owes me a favor, and leave it at that. One can never have too many minions.

The most obvious path to assured victory is also, within the context of a game, among the weakest. There are a multitude of ways to cheat at your little contests, but all of them share a simple flaw: they can be detected and punished. A player with a 90% success rate is feared; a cheater with a 90% success rate is discovered. And while you may think yourself quite clever, no one can get away with murder forever—except me, of course. There is always a greater power. 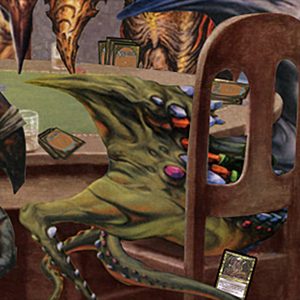 But if you cheat and are discovered—and you will, in the end, be discovered—then the game is over. You are a cheater, and there is no reason for anyone to tolerate you. And within the context of a game, that means that you cannot beat them anymore. You have lost—your previous victories meaningless, your future victories denied. Pathetic.

Why bother cheating? There are so many risk-free ways to play within the rules ... and win anyway.

As I said, I do not play games. But in preparation for this article, I briefly familiarized myself with the rules and strategy of Magic. This did not take long; it is a simple pursuit, by my standards.

There are over 10,000 unique Magic cards; your deck will contain cards with perhaps twenty different names. Even in a Singleton format such as the flatteringly named Elder Dragon Highlander, you will include, at the very most, 1% of the cards in existence. (I will waste no time considering the obviously inefficient choice of playing more than the minimum number of cards.)

Furthermore, these cards are not created equal. Their quality varies, yes, depending on the cards with which you combine them, as well as on the "metagame" in which you play. But beyond that variability, for each deck, in each environment, there is one best card—and it is that card, and only that card, which is the correct choice. 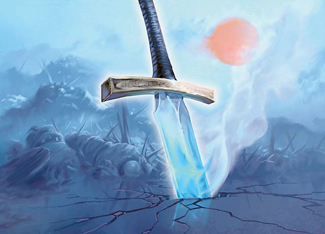 Your deck is your weapon. Why should you go into battle with anything but the best weapon available?

Mr. Digges has spoken in the past of being constrained by the lack particular cards, or of actively choosing to restrict his options to make decks "easier to build" or "more fun" or whatever other abstract notions to which he assigns value. This is hopelessly quaint. There is one set of rules for every player. If you restrict yourself within those rules, you are hobbling yourself. Losing because you failed to optimize your strategy is not "fun," no matter which of these psychographics you supposedly represent.

The complete list of cards is available in a searchable database on this very web site. Individual cards are widely available for trade and sale. Successful, proven deck lists appear on this site and others every day. Arm yourself with information. Use every resource at your disposal. Discern which cards will serve your aims and acquire them.

At a Free-for-All multiplayer table, you are always outnumbered. Competitive players tabulate card advantage in duels, counting two-for-ones and three-for-twos to determine which player has spent more resources. In multiplayer, your opponents collectively draw four or five cards, at least, for every one that you do.

That means that mere efficiency will not suffice. Your deck needs to be resilient, standing up to punishment by multiple opponents for many turns on end without running out of any of the necessary resources—cards, life, mana. In addition to obvious multiplayer cards (Unnerve"), you need the cards that give a deck power in the long game.

Don't choose cards because you like them. Choose them because they do one or more of the following:

Again, your deck is your weapon. It should be nothing but the best.

Rules are a funny thing. In this game there are the written rules, represented ultimately by that ponderous document known as the Comprehensive Rules. There are also, in many casual players' minds, some widely variable set of unwritten rules—"no banned cards," say, or "no infinite combos," or that inveterate classic, "no counters, no LD, no discard." If these unwritten rules are agreed upon before the game, they become part of the format, part of the framework within which you seek to triumph. If they are not discussed ahead of time, they are delusions, not rules.

But back to those written rules for a moment. Your game is complex, as these things go, and the rules that govern it at its most granular level are equally complex. It is in your best interest to become closely familiar with those rules.

If an Oblivion Ring or Tidehollow Sculler leaves play before its "comes into play" trigger resolves, the card it removes will never return. If you tap Kiki-Jiki, Mirror Breaker to put a token into play during the end of turn step, you won't have to sacrifice it until the end of the next turn. If you return Siege-Gang Commander to play with Torrent of Souls, the tokens do not get +2/+0 and haste. 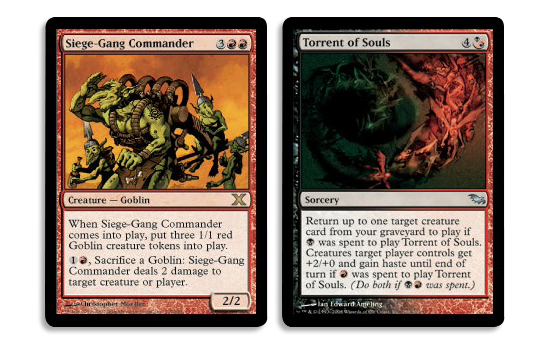 Perhaps you already knew these things. I did, after a cursory examination of the rules. If you did not, someone else did—someone who could use that rules knowledge to defeat you. The rules are the battlefield on which you fight. Know them or perish.

In two-player Magic, it has been said, there are two kinds of plays: the best play, and the wrong play. In Free-for-All multiplayer, however, there may be a multitude of right answers, depending on the actions of those around you.

In multiplayer, you have opponents, plural. There are four or five of them, and only one of you. Should they all decide to attack you at once, you will be hard-pressed to fight them off. Thus, any player in a multiplayer game relies, to some degree, on the sufferance of the other players. The solution, therefore, is not to ensure that you cannot lose, as in two-player. It is to ensure that you will not lose if other players behave predictably, by disincentivizing behavior that harms your interests.

A basic example: You have a Seal of Doom in play and are quite clear that it will be used on the first player to attack you. If three other players have creatures that can pose a serious problem to you, you cannot defend yourself if all three decide to attack you. But the first player to attack you will lose his or her creature. In practice, each of them will likely decide to put their focus elsewhere unless you are the obvious threat.

Make no mistake—you are playing the table, not just the game. Don't jump to a threatening early lead. Point out others who are powerful. Keep mana open even if you have nothing to spend it on. If you make a threat, be prepared to follow through on it.

At some point, you will find that another player has placed him- or herself at your mercy—perhaps simply by being vulnerable, or perhaps in an attempt to curry favor. Mr. Digges described a situation some weeks ago in which a player generously gave him 30 life and favorably split a Gifts Ungiven, only for him to turn around and use that life as a buffer while he destroyed her. Villainous—but not very intelligent.

The correct choice to accept such favors, and direct your attention to other threats for as long as you can afford to. You now have an ally ... and ally is just another word for minion.

That is the extent of the insight I am willing to grant at present. I do not care whether it has been useful to you. If you use these techniques and win, you have my permission to inform your opponents that Bolas sent you. 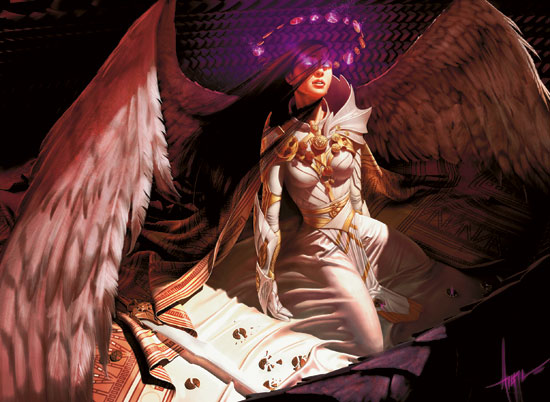 Slave of Bolas, by Steve Argyle