I've spent many weeks lately discussing formats that feel more helpful to groups of four or more, I'm going to take at least a week here and pay some respect to those of you who are in groups of three.

Three shows up a lot – and not just in the “Cause and Effect” episode of Star Trek: the Next Generation. (I normally wouldn't sound like such a geek; but my daughter just discovered our Season Five DVD collection, so...whoops, just got worse, didn't it?) There are countless trios out there – pals who play for forty minutes during school lunch, groups of seven who split into tables of four and three, emerging groups who are just discovering the differences between duels and multiplayer, and struggling groups who remember the glory days of weekly Emperor games and are just hanging on until they can pick up a few new members again. It's time this column spoke to you folks specifically.

For this week, I'm going to stick to simple chaos strategy. If the mood hits, I'll suggest alternate formats for three-player games. (Note there are quite a few dictionary formats from March's columns that would work just fine for three players.) We'll look at what's unique about three-player games, and then think through some strategies to improve your game.

The unique thing about three is that it's more than two, but less than four.

Okay, that came out sounding stupid, but it's true. Three represents the simplest multiplayer game you can have. Anything that defines multiplayer games – the idea of multiple opponents, playing for a longer haul, identifying the true threat, and so on – is at its most basic in a three-player game.

From this really basic statement, we can say at least three things about three-player games:

Let's take each point in turn.

Speed: Moving from a duel to a three-player game sounds good at first: you've reduced the chances of getting early attention from 100 percent to 50 percent! Sweet deal. But in practice, since there are two players out there who are looking at you 50 percent of the time, you're still getting the same rough amount of hustle and bustle early on.

So three-player games tend to move along faster than the average casual format. It's not like the end of a nine-player chaos game, with only three players left. At that point, each of the survivors can have anywhere from ten to twenty permanents (often creatures) on the board, and whatever stalemates existed with four players left can easily continue for another hour or so.

Starting fresh with three players works differently. The smallest change in early board position can shift a whole game in another direction.

More so than in any other multiplayer format, there is no hiding in a three-player chaos game. (If you're able to hide, your two buddies are ridiculously naïve, or perhaps vision-impaired.) There's no flying under the radar, no tricking an opponent into thinking that you don't feel you can win this game. Not until the late game, anyway – and by the late game, you should be dead. 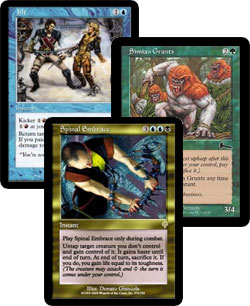 Make them pay to find out…

Deckbuilding Implications: When I think of the sort of card I want to invest in for a three-player game, I think of finesse removal like Jilt, Simian Grunts, and Spinal Embrace. I don't generally think of Earthquake or Upheaval – it's not that those cards are bad; it's just that expensive “gorilla” sorceries that smash the board really aren't necessary when you've only got to make it through two opponents. When you compare what a turn four or five Wrath of God kills in the average seven-player game versus the average three-player game, you'll often find yourself just as happy with a Kor Chant.

Save the overpowered sorceries for another format. For a three-player game, you want to travel light.

A good starting point for a three-player chaos deck is a solid, aggressive, independent lieutenant deck. After all, both have to be ready to finish off two opponents single-handedly (since an emperor doesn't always help). Fast and capable creatures, good instant utility – efficiency is king, here.

Play Tips: Remember, you're not going to avoid attention completely. A normal progression of threats is your best bet. As long as you're above ten life and no one has a ton of creatures, there's not much reason to hold more than one blocker back at a time. Push hard against either opponent – I prefer the weaker one to start – and see what happens.

If the third player comes at you, you know she's worried and doesn't want to get into a duel just yet. Keep pushing on your original target and take them out of the game as quickly as you can. You'll be in good position to start the subsequent duel.

If that third player holds the door open for you and lets you pound on that poor other opponent, then keep your antennae up. Consider a change of targets. If she's holding something back that will devastate you in a duel, you want to see it now, when the other player may still be available (and perhaps even inclined) to help you get rid of it.

Which brings us to our next topic.

Two-on-one potential. It's nearly inevitable for a three-player game to see at least a few turns spent in “two-on-one” mode. As one player emerges as the favorite to win, the other two gang up and seek to take her down. This certainly also happens in larger chaos games (when it resembles something more like vultures and hyenas battling over a corpse on the safari); but in three-player games, there's actually a realistic chance for you to beat two players at once.

It depends on the board situation, of course, and the decks involved. You won't always be able to pull this off. But you should at least expect it to happen, and be prepared.

What does “being prepared” mean? Well, it means a couple of different things. First, it means you need to be able to play defense. Second, it means investing in "rattlesnake" permanents that warn away attention like Shock Troops, or the kind of instants we covered in the section above. (If you don't know what I mean by “rattlesnake”, you'll want to do some searching in my column archives.) After all, if you don't have solutions to problems, you're not going to last.

Third, it means learning what makes your opponents tick. Pay attention to how each player attacks and when. How does she assess threats? What seems to warn her off? What seems to provoke her? Once you've got a good sense of what your opponents fear, you can adjust your decks and play to match.

Deckbuilding Implications: Going back to the aggressive deck idea above, if I wanted a red creature that could deal six damage when it comes out, I would prefer Keldon Champion over Ball Lightning. Aggressive is fine; but there are cards (particularly in red or black) that sacrifice significant resources for a temporary gain. Avoid them.

Aggression certainly isn't the only way to go. A good control deck can often sport an enchantment or artifact – Ensnaring Bridge, Cowardice, etc. – other decks aren't prepared to handle.

Play Tips: I've covered the aggressive deck above. Control decks, which often inspire ganging up, have an ever greater need to prioritize opponents. If you're facing down a green/white creature deck and a red/black creature deck and you plop down a Pestilence, the game for you immediately becomes a duel with the green/white deck. (That is, your #1 priority is to get rid of the board's ability to play a Disenchant or Naturalize.) Once you've done that, the other player may actually concede, depending on what life totals are.

Duel readiness. When half of any given multiplayer game is not a multiplayer game, players are in a sort of shadowland between group play and casual dueling. Whether group enthusiasts care to admit it or not, multiplayer decks tend to be less efficient than duel decks. That's fine – they don't need to be super-efficient machines of death – but you need to make sure you're following some basic rules. (These will be familiar to regular readers.)

Whenever I do a list like this, there's always a bunch of readers who want to either (a) point out all the successful tournament decks that have less than 24 lands and/or (b) tell me how cool that 61st card is and how their deck can't possibly win without it.

A word on lists like this: they're rules. Follow the rules. Learn the rules. Succeed with the rules. Once you've done this for a year or so, then you can try to bend the rules, or even break them. At that point, you certainly need not follow my guidelines.

You may contact Anthony at seriousfun@wizards.com. Anthony cannot provide deck help; nor can he explain the time-space theories on how Data's positronic net was able to send a message to the next loop.