The trick? I want you to guess how well each deck did.

It's not that difficult. You can often see a deck's strengths and weaknesses just by looking at what's in it—the card choices will tell you where it's vulnerable and where it's unbeatable. So instead of having me tell you what works in multiplayer, I'd like you to use your own brain cells. Tell me how each of these decks are likely to fare in a five-man game! 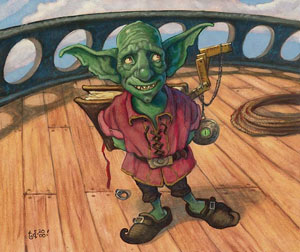 Our playgroup last Tuesday had five players, if you include me. We play Legacy-legal decks, but we generally don't have to sweat the banned list, since we do play casually. Our decks run the lifespan of Magic; Paul has a complete set of every Magic set ever printed, Ian and I have a good (but not thorough) selection of cards dating back to Beta, whereas Jack and Adam make do with handfuls of more recent cards.

Combo shows up occasionally, but is generally frowned upon as a constant choice. We swap decks between every game, unless someone just wants to give a fun deck a second chance.

I could tell you about the players—and will, when discussing the aftermath—but ultimately, that doesn't have much to do with how the deck itself would fare. And no worries—I didn't get manascrewed in any of these games.


I wanted to make this from the day I first saw Grimoire Thief, and I finally made it happen. It's obviously a mill-and-fill deck, with an unbounded Millstone combo in the form of Intruder Alarm / Drowner of Secrets / Stonybrook Schoolmaster.

In case you don't see it, it works like this:

But aside from that, you can use Grimoire Thief to target the player you've elected Most Likely to Have Have-to-Counter Stuff. (Try the guy you suspect has mass removal.)

This deck's a little inconsistent due to me not having all the cards that I'd like to. For example, it really does need 4 Sensei's Divining Top to keep the card quality going (this deck, with the notable big exception, functions fine on three mana, but it wants to keep the Merfolk on top to trigger the Ink Dissolvers), but all my spare Tops are in other decks. (I'd probably cut the Merrow Harbingers and perhaps Intuition—a good card, but when I'm playing it it pretty much telegraphs that I'm going for the combo.)

Likewise, if I had multiple Merfolk Looters, I'd probably use them. And I wasn't sure which of the many white save-something instants would be helpful, so I sort of stuffed them all in. But the core's pretty solid.

But that's Deck #1. So how do you think this would fare at a five-man multiplayer table?

I was pretty sure this deck would be a spectacular failure. Yes, it mills very efficiently, but it has a couple of key weaknesses:

The core's pretty solid; there's just not enough room to address all of the vulnerabilities here. Then again, I don't build all of my decks for Maximum Power. I thought this would just be fun to play, and to watch how the other players reacted when I dropped a Forced Fruition onto the field.

This deck would have a great effect on the board. But unless I got the combo out—which, given that it's vulnerable to spot removal, I doubted—then I was pretty sure it'd mill a ton of cards, then go out under the collective bootheel of an enraged table.

It's Rogue Week at magicthegathering.com. And though I'm not officially tasked with the job, I want in on this Rogue action, courtesy of the amazingly powerful Notorious Throng!


I call this deck "The Rouge Deck" because back when I edited StarCityGames.com full-time, handling all the reader submissions, I was always, always hearing about "rouge decks" that would break the local Standard scene wide open.

They meant a "rogue" deck, of course—an effective, tight little deck that nobody had foreseen, like a burglar in the night. But they kept typing "rouge," and I was always, always amused by the idea of people touching up their deck with makeup and face powder before bringing it to the tournament.

This deck's power comes from two cards: Oona's Blackguard and Notorious Throng. I first learned of the Throng's power in a triple-Morningtide draft, where I plucked a Throng out of my first pack and never looked back. And it won me several games that I would have lost.

Time Walks with tokens? Not bad in multiplayer. Especially when, courtesy of a shadowed-up Infiltrator il-Kor and a forestwalking Boggart Loggers (potentially made even worse by a Stinkdrinker Bandit), I could potentially get ten 2/2 flying tokens that make people discard things.

That's Deck #2. So how do you think this would fare at a five-man multiplayer table?

Again, this was designed to be a fun deck, not a powerhouse deck. Because it makes one of the classic errors of a bad multiplayer deck:

It assumes it's going to carry out its own plan.

Aside from the pricey Violet Pall, I have no way whatsoever to interfere with my opponents' plans. If they clear the board? I'd better draw more stuff. If they strip my hand? No help. If they drop an Ensnaring Bridge or some ridiculous enchantment? Mise well pack it up.

This has a strong plan when it fires, but I'm at the mercy of whatever my opponents do.

Plus, this is extremely vulnerable to board-clearing effects. It relies on having several dudes on the table at once. In an environment without a Wrath of God, this could be awe-inspiring... but I wasn't betting on that happening any time soon.

If I lucked out and nobody had Wrath of God, then I'd probably win. If not, then it relied on what other players brought to the table.

My old green-black deck is one of my classics – heck, I wrote about it in my second Serious Fun column. But I had a bunch of good green and black cards lying about, and I wanted to build another green-black deck.

The problem, as usual, was that I had too many good cards. I wanted to stuff the 4 Grim Feast in there, but how could I also get my Krosan Tuskers and my Cranial Extractions and my Dreads and my Phthisiseseses all in there?

I looked at various builds for a long time, but the problem was that these were cool cards. I was itching to play with them. Leaving any of them out just seemed to be missing the point, but I had to leave them out or reduce them to a pitiful one-of.

One-of. That was the word. Why not build a Highlander deck? There can only be one of each non-basic land card! It'd be uneven, sure, but then I could play with lots of cards—and better yet, it'd never play out the same way twice! And I like that idea.

The Other Green Meat


That's Deck #3. So how do you think this would fare at a five-man multiplayer table?

I put it together, and the more I looked at it, the more I liked it. It was going to be an erratic deck, of course—I had no tutoring to get cards on demand, and with a Highlander deck I couldn't count on redundancy—but it had a lot of power. There were a lot of cards that could swing the game on their own, some global removal, and a fair amount of recursion.

Aside from being a little too erratic for its own good, this one hewed pretty closely to the best principles of multiplayer: Recurse, thin, and control. So assuming it didn't get kayoed by mana, I thought it would do pretty well for a collection of random rares.

If Adam had targeted me with Bribery, what creature should he have gone for? Here's what was left in my deck at that point:

I have my own choice... And in fact, I think it's the clear winner. But discuss in the forums.