You Have No Secrets

Stybs has played Magic the world over, writing and drafting as part of the event coverage team and slinging Commander everywhere his decks will fit.
Share Article
Share Tweet Share
Don't bother running. They already know where you'd go.
Don't bother hiding. There's nowhere they can't see.
Don't bother thinking. You have no secrets left unknown.
When your usefulness reaches its end, don't bother crying. No one will remember you even existed. 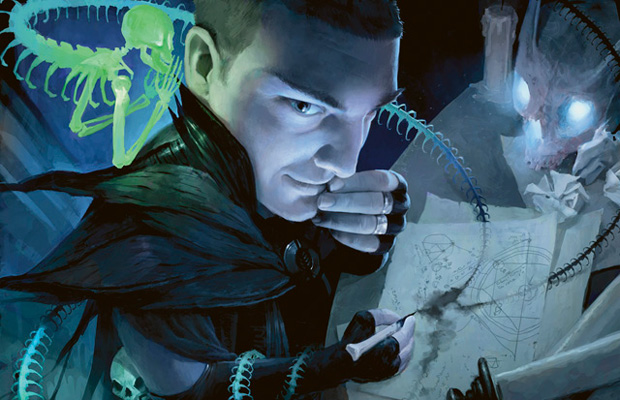 t's Gatecrash preview season, and I get to start with one of the most-anticipated cards—at least in the Magic circles I play. This card comes from one of the most popular guilds, and it's a face you'll never truly see. 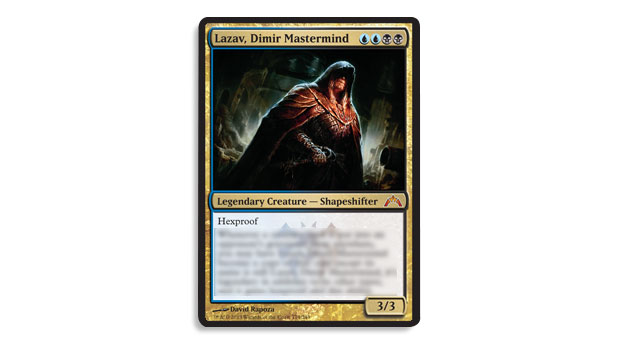 Lazav, Dimir Mastermind follows the formula for the guild leaders in Return to Ravnica:

Lazav has the right stuff to be a fine creature. A 3/3 for four mana isn't small—it passes the so-called "vanilla test"—and hexproof is certainly a powerful ability. His true power, however, reaches far beyond what we see. I'll provide the clues I can recall, but it's going to take some effort to restore what's missing.

The Dimir of Ravnica: The City of Guilds called upon two powers:

I'm sure Mark Rosewater will cover the reasoning behind the original design of the Dimir, but from what I see the two abilities are flavorfully playing at the "mind" of a Planeswalker: You can remove pieces of an opponent's knowledge (cards in his or her library) and can call upon specific knowledge of your own (cards in your library). Drawing your own extra cards and opponents discarding their cards played along with these, but it was milling and transmuting that defined them.

And Lazav fits right in with the old.

Pieces of the Memories

2 Induce Paranoia 2 Clutch of the Undercity

2 Tricks of the Trade

3 Lazav, Dimir Mastermind 2 Tricks of the Trade 2 Induce Paranoia 2 Clutch of the Undercity

It's an average milling deck... or is it? Glimpse the Unthinkable is a popular powerhouse from the original visit to Ravnica, and Mind Funeral wasn't long thereafter. Drift of Phantasms can become Mind Funeral when needed, but will serve well beside Fog Bank and Kraken Hatchling on blocking duty. Accorder's Shield shores up the defense while Tricks of the Trade gives us an alternative victory with Lazav's hexproof. Geralf's Mindcrusher can attack or block as needed, and serves a sweet spot for milling.

But when Lazav is in play and Mind Funeral or Glimpse the Unthinkable resolves something strange can happen. If [CENSORED] show up we can pull from the knowledge revealed and punish our opponent's plans. Tricks of the Trade looks even better when that happens.

Kill and Be Killed

Who cares what our opponent's plans are when we can simple sculpt it to our desires? Whatever our opponent tries with [CENSORED], we can interdict our will with Doom Blade, Go for the Throat, Ultimate Price, and Fleshbag Marauders. Reassembling Skeleton and Psychic Drain play along, giving us time to ramp up our mana with Dimir Signet and Dimir Keyrune. And after some Careful Consideration I'm confident that Attrition or Dimir House Guard will give us the edge.

It doesn't matter how our opponent's [CENSORED] end up where they lie, Lazav will see fit to use the best information. In fact, he can just sit back and wait for the information to pop up through the work of agents.

Ninja and Faeries are fearsome friends, but here it works. Faerie Impostor resets an otherwise "spent" ninjutsu, and Grim Roustabout can enjoy the bouncing, too. A combination of creatures that draw cards and Rogue's Passage should help keep our hand of knowledge full. Sakashima the Impostor and Lazav, Dimir Mastermind are cut from a similar cloth, although they're doing their thing in different ways.

In our case, whatever our opponents' [CENSORED] may be—in play or not—we'll have ways to take advantage of them. And if they don't have creatures we can just attack them to death. I hear that's fun too.

Unfortunately, this is the best that I can recall from my encounter with the Dimir. Can you solve the mystery for me?

If you need a few hints, click to reveal them :

Thanks to the help of some "charitable" Orzhov lawmages, the layer of memory hiding the final step has been revealed. Before even getting into the old, you should look for the tiniest clue after " ".

Lazav would be impressed. You've earned the right to peel back all doubt. 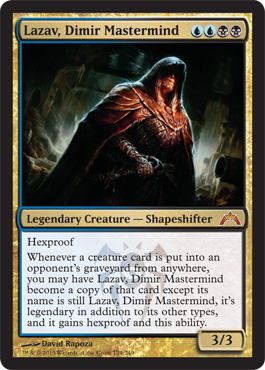 Lazav is unique and powerful. A "Hill Giant with hexproof" isn't quite up to legendary snuff, but this unique ability tacked on is. How does it work? Lazav looks for any time an opponent's creature is put into a graveyard, and he can do his thing. That means:

While some creatures have a replacement effect for entering the graveyard (like Darksteel Colossus) most don't, notably even the powerhouse fatties Kozilek, Butcher of Truth and Worldspine Wurm. While they'll still go the way of the Soldier of Fortune, Lazav's ability is a trigger as well.

Creatures your opponents pack can and will be used against them, just not in the way they imagined.

What makes Lazav really tricky is that you can't normally plan around what abilities he'll have. The black box that is an opponent's deck isn't something so easily penetrated. 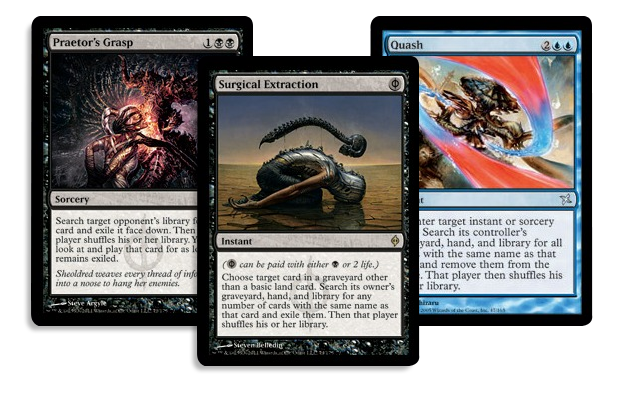 Cards like Praetor's Grasp and Surgical Extraction give us a way to look through what we're facing down, which helps cards like Quash do the most that they can. Knowing what's possible is only part of the problem. While it's tempting to be tricky with a Blood Funnel that you Donate to an opponent, there is one format where creatures appear with wonderful frequency: Commander. 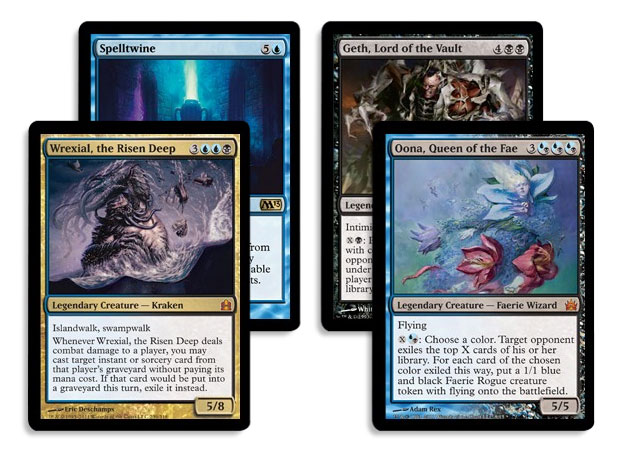 If you choose Lazav to be your newest commander you're probably familiar with similarly colored options Wrexial, the Risen Deep and Oona, Queen of the Fae. Both of these graveyard-focused fiends pair well with Lazav: Wrexial, the Risen Deep, and it's spell-lookalike Spelltwine, takes advantage of players who avoid putting creatures into the graveyard, while Oona, and her Zombie-based buddy Geth, adds cards to the graveyard while providing other benefits.

The best part about moving up to a hundred cards from sixty with Lazav, Dimir Mastermind is that most Commander players have a suite of creatures they want to cast. Entire decks are built around abusing creatures put into the graveyard, which means Lazav can literally sit back and wait for the right moment. 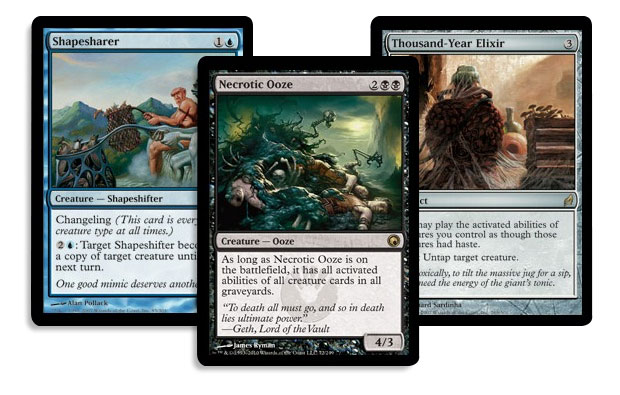 Taking the idea of sitting back even further, Lazav will find good tools in Shapesharer, which can be recycled as something else each turn; Necrotic Ooze, which appreciates extra creatures that end up in graveyards; and Thousand-Year Elixir, which makes any abilities we uncover turn on immediately and come with a bonus use. 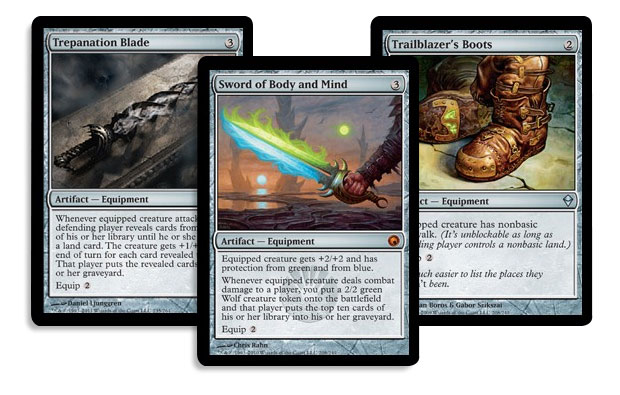 If we can reliably cast Lazav we can take advantage of his hexproof to do some damage. Tricks of the Trade, mentioned earlier, is certainly sweet, but I find Equipment gives me more flexibility, so non-Lazav creatures become options too. Trepanation Blade and Sword of Body and Mind have obvious interactions with an opponent's library. Trailblazer's Boots is a great way to always hit home in Commander.

The real question, of course, is how will you tap into the power of the Dimir? Send me your ideas through the email below or on Twitter and we'll see what we can do together.

Join us next week when we get a little greedy in the second week of Gatecrash previews. See you then!