very so often there comes a time when whatever I'm playing in Magic becomes passé—boring. It's not that the idea of whipping out one of my go-to decks isn't appealing or cracking some packs for Draft or Sealed doesn't seem intriguing, it's that I have a gnawing hunger for something a little different.

Usually, to add a little spice to the everyday ordinary I make a little Magic sundae with all of my favorite way-to-play-toppings, piled high. Even then, after enjoying the delicious flavors I crave so often I sometimes pine for a fresh taste: a new, exciting way to ignite my Magic palate.

Thankfully for us all there are some pretty smart guys and gals whose job it is to design and develop brand new Magic for the masses. Last year Planechase snapped my casual group in half—some preferring to keep to what they like and the rest gleefully walking the planes. Guess which group is larger now? With a great new ingredient to work with it took approximately 30 seconds (this isn't an exaggeration) before some of the fellows mixed Planar Magic with their EDH.

Like a legendary meeting of peanut butter and chocolate, EDH Planar Magic has been folded into the rotational repertoire of ways to play for us. This year, the Summer of Multiplayer, is bringing us the namesake (and cause) of our theme this week: Archenemy. In case you haven't heard, multiplayer is the new duel and you don't want to miss out on all the action.

All Shall Smolder in My Wake

If you're not into food analogies let's try an overused one: the melting pot. Mixing together the elements of different things can often create distinctly unique substance. Let's start with something pretty normal, as far as fun to play formats is concerns:


Borborygmos is one mean, angry Gruul. Of course, when your goal is to bring down all of civilization around you it helps to have a plan. While the Gruul themselves aren't exactly known for their tactical and long-term planning it's clear they brought some fierce powers to play: 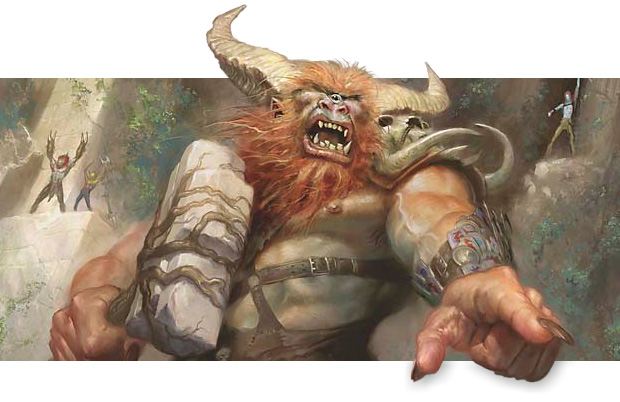 With the world smashing power of the Gruul clan at your service it would make sense to pair it up with the Archenemy Trample Civilization Underfoot schemes. While the passionate, stompy nature of the red-green clan is in action it just feels right to schemes like May Civilization Collapse and The Very Soil Will Shake.

Combining Archenemy and EDH is a natural progression—what's more flavorful than having a champion, or lead henchman if you will, bolstering your plans and providing consistency to your armed forces division? With Borborygmos being the champion of the end of the world you can earn some major bonus flavor points by having your fellow players—opponents—pilot other legendary dudes from the plane of Ravnica: imagine what the combined force of an elite dream team of law enforcement officials to champion the cause of order could do! Grand Arbiter Augustin IV; Razia, Boros Archangel; Tolsimir Wolfblood; and Teysa, Orzhov Scion not only cover all colors but represent the combined interests in establishing some order of control.

Of course, these "champions" are all at the beck and call of their planeswalker player controllers. We planeswalkers are not bound to one world—we traverse the multiverse to fulfill our desires. Planar Magic can be thrown on top of the heap of special rules. However, if a team of heroes is opposing the villain it only makes sense that they would travel the planes to challenge the villain wherever he would go.

With the only planar deck being that of our villain it becomes clear that even when a hero would exert the effort to rip everyone away there would be no guarantee that where they would end up would be any better. Of course, sharing one planar deck is just one way to bring the multiverse itself onto the table. With enough plane cards each player could choose two (or three or more!) to put into the shared plane pile, so everyone would be closer to even footing in terms of where to planeswalk, or maybe even have their very own planar deck. However your group chooses to handle it, you're in for a wild ride.

For the more adventurous of spirit there are certainly some other ways to change up and layer on Archenemy. One way I'm looking forward to getting dirty with is to bringing it into a game of Emperor Magic. Before the furious head-scratching lights a fire on your scalp consider the intriguing balance between two villains pairing their pawns off as offense and defense. If each emperor carries their own scheme deck it balances against two teams similarly equipped facing off. 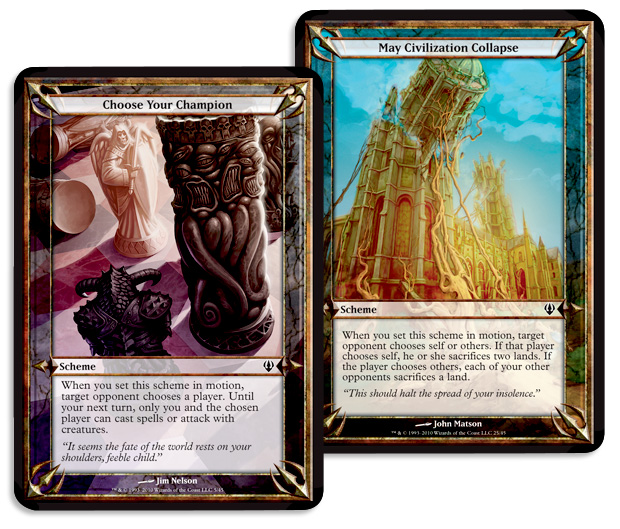 There are a few considerations to keep in mind when flexing Archenemy in this different way: schemes like Choose Your Champion become a bit unruly to play around while those like May Civilization Collapse have a slightly reduced bite. Consider carefully the schemes that are to be thrown around and make adjustments to their inclusion as good sense dictates—or be as villainous and rogue as your dark, evil heart desires. Morality is all about your perspective, after all.

Taking the idea of multiple archenemies further—consider the potential insanity to be shared when every player in a multiplayer game has their own schemes in the works. With a little kitchen table errata, each player can use their fearsome plans as just an extension of their planeswalking powers. Schemes like Roots of All Evil and Behold the Power of Destruction become tamely defensive or a devastating political statement. I imagine it would look quite similar to multiple Death Stars and Imperial Fleets, of Star Wars fame, converging and engaging in a shootout. 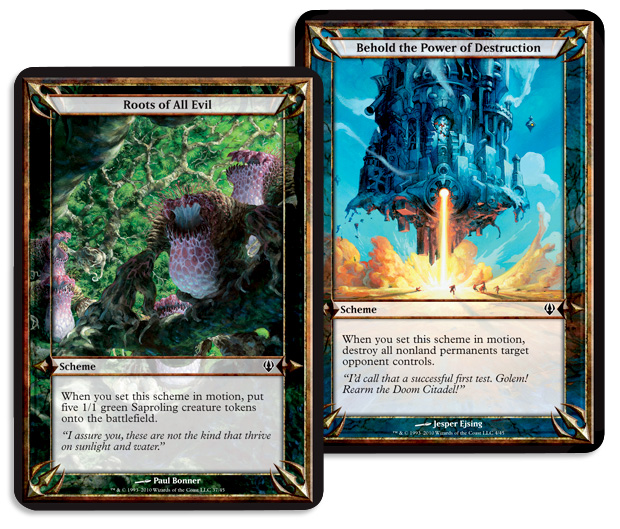 In a different twist, consider taking Archenemy as a weird form of Planechase: Chaos Magic. Every player paying some mana to fish up an epic effect? Not here! Just having each player flip up a scheme card as per the normal rules for the archenemy seems like an out-of-this-world way to ratchet up the chaotic level of free-for-all games. Here is a nice set of 20 schemes that would be a pretty balanced pile to have to set into motion:

A mix of beneficial effects with varying degrees of hateful offense, virtually any deck at any time will be glad to see one of these schemes come through. Without the mess of choosing and debating individual cards to use to randomize, the Archenemy schemes are everything a true player of Chaos Magic is after. Again, there are bonus points to be had by slugging in some planes and ripping a choice: take the Chaos ability as a sort of "set this into motion" effect or to keep the plane's regular ability as an ongoing scheme.

While I've certainly given you a great start on some ways to bring Archenemy to life outside of, you know, playing Archenemy. Since the Summer of Multiplayer is just getting started, with Archenemy Release Events coming this weekend for you, I now direct your attention to the feature of the summer: the Magic Community Labs. I'm sure that some of you will see, discover, test, and realize that "Hey, this way we're playing is pretty damn awesome!" and the Community Labs is set up just for you. Use the tools provided, link up with your friends, see what others have been cooking up, and find something new to try out.

Archenemy is what the masterminds behind all the new cards have come up with this year but now they're asking for the new ways you play the game out there. Share your stories, house rules, and inventive favorite ways to play—I can guarantee they're listening!