"Mage" is a broad term in the Magic multiverse. It doesn't just mean the studious spellcaster with his nose planted firmly in the brittle pages of an ancient grimoire (in other words, a wizard). It also means the shaman, the mage who wields magic from the gut, who lets her emotions and personal experiences of nature guide her enlightenment. The shaman derives magical power and inspiration directly from the world around her, without allowing too much abstract, ivory-tower thinking to get in the way. A shaman derives power from her passion and her instincts. Many shamans believe fervently in the importance of the fundamental forces of nature, including their own instincts.

But at root, shamans are mages. They summon up power from sources of mana, guide and sculpt it using their own magical abilities, and cast that power as spells.

Shamans Are Usually Red and Green

Shamans are tightly tied to the green and red part of the color wheel. The values of self-expression, motivation by instinct and passion rather than forethought, and individual freedom hit both those colors and the flavor of shamans right on the head. 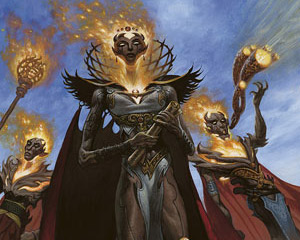 There are some interesting exceptions in Magic's history, both long ago and recently. Homarid Shaman and Balduvian Shaman are blue, and Shaman en-Kor is white, but they were printed before Mirrodin, so the Shaman type was applied to them retroactively. These days it'd be unusual for a blue creature to be concepted as a Shaman, unless it was associated with a race or culture that was strongly flavored as having a more shamanic outlook.

Selesnya Evangel and Doran, the Siege Tower, for example, are white. They're green, too, but more importantly, they're part of shaman-flavored groups. Doran is a treefolk, and treefolk are about as nature-oriented and anti-book-learning as you can get (let's put it this way—can you envision a tree leafing through a tome made from the pressed pulp of his fallen friends?—no, treefolk are all about the oral tradition). And Selesnya Evangel is part of the Selesnya Conclave, which is more about nature and community than spell research and theory-building.

When gold cards are involved, the Wizard / Shaman divide can come down to judgment calls. The Ravnica guildmages are an excellent test case. (Remember, "mage" is a general term that covers both shamans and wizards.) Below is a little quiz. Let's go around the clock of the color wheel and see if you can guess, just from art and flavor, what creature type each of the guildmages had. No fair firing up Gatherer!

Can you identify the class type of each of these Ravnica guildmages? 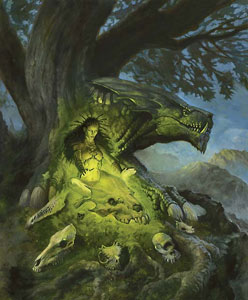 Shamans Dwell in the Natural World

A shaman's relationship to nature is deeply important to his life and magic. Some shamans are literally nature shamans, living in the wilderness and absorbing the simple truths inherent in the natural world through daily contact. This leads to a passionate defense of all things natural (overlapping with the role of the druid) and a general distrust of the effect of technology and civilization on culture. It also leads to the ability to conjure up really nasty beasties when necessary.

Other shamans are less about flora and fauna and more about "nature" in the sense of the deep forces that make up the world. Many elementalists, like pyromancers, lightning stormcallers, and other manipulators of elemental forces, are shamans. (Interestingly, there is a wizardly tradition of elementalism, too, centered in blue.) Many of the Shamans in Lorwyn and Morningtide (and Shadowmoor) are themselves Elementals!

Shamans Can be Good, Evil, or Anything in Between

Now, while shamans deal in magic of nature and the elements and all that hearty stuff, I don't mean to imply that shamans are always good guys. Shamans are creatures of emotion, and emotions can be destructive and hateful as well as wholesome and empowering. It's tricky business, because evil shamans don't see themselves as such. A shaman focuses his abilities though his personal cause or his own emotions, and that's the core of his being. No one channels magic the way a shaman does without believing in what he's doing. 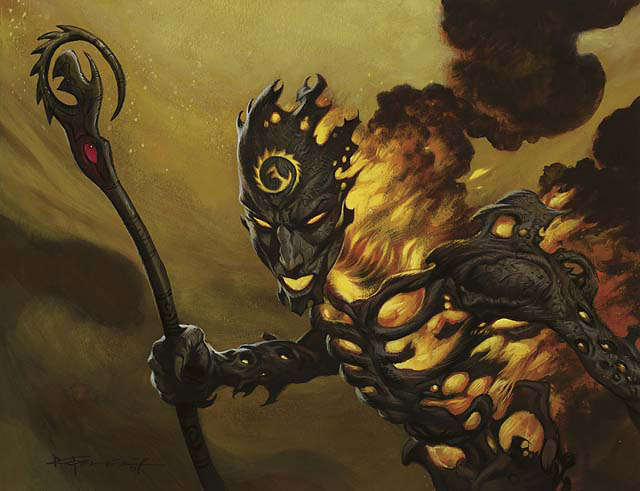 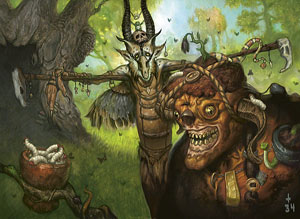 These days, the word Shaman is in vogue as a mechanical word as well as a Vorthosian one. Shamans have their own artifact in Thornbite Staff (a branch of a blackthorn tree that has been struck by lightning) and their own "lord" in Rage Forger (a flamekin smithy who binds his own passionate anger into the magic of the swords he crafts). They have kinship cards that trigger off of other Shamans and cards that spawn off Shaman tokens. The decisions for what races got what class types, though, was largely flavor-based. Black boggarts and elves in Lorwyn and Morningtide are Shamans, while black faeries are always Wizards. White Giant spellcasters are Wizards, while red ones are Shamans—it's all based on the flavor of the race.

That's not to say that only the creative team was involved in choosing classes. As an example, let me give you a Shadowmoor creature type anecdote. There's a significant tone shift that happens to the world of Lorwyn as of the Shadowmoor set, and that tone shift affects races in dramatic ways. We on the creative team thought it would be cool if some of that flavor was mirrored in the races' class type associations. We wanted merrow spellcasters, for example, to change from Wizard to Shaman in Shadowmoor, to reflect their new attitudes. As it turned out, though, that creature type change (which would have occurred simultaneously with other mechanical changes to the race) would have been too disruptive to tribal deck building.

You need only watch your favorite 24-hour news network to see why shamans are important. Each headline after depressing headline is another weight pulling down one side of the scale of civilization. Shamans see this as a pattern, and recommend another path.

My friend and I were talking about flavor text and such. We noticed the lack of flavor text on [basic] lands. How could something like that happen?
–Jack

Jack went on to propose a complicated plan in which the basic lands would have developed personalities and would be talking to one another—he even plotted out for me the kinds of personality each land would have and ranked the five basic land types by relative intelligence. There were charts. Fantastic stuff.

And the basic question is a good one. The main answer is that basic lands have no flavor text because their job is to be the most straightforward part of the game to understand. Basic lands are the cards that are in front of you more than any other card, and they're the basic fuel for all your spells. They are hugely important, and yet we want them to take up almost zero mental space. We want to keep attention on the spells in your hand and the creatures on the board, and the creatures on the other side of the board, and the number of cards in graveyards and how many cards your opponents have in hand, and the storm count, and the number of manlands your opponent could activate, and your kinship triggers, and your life total—you know, everything else. Basic lands are there almost all the time, and yet they need to fall by the wayside in terms of how much mental processing they take up. Certainly we try to make them as beautiful as possible—we work hard to get awesome art for the basic lands. But if we put some cool flavor text there for you to read, I think it would violate the spirit of that principle of simplicity.

The other part of the answer, for me personally, is that basic lands let you fuel your spells however you want. I like how open-ended basic lands are, how agnostic they are about whether you're using them to summon 7/7s or assemble crazy combos or counter every spell your opponent plays. Beyond their art and color affiliations, they are blank slates. You—the planeswalker whose mana bond that land card represents—get to choose how to use that one red mana, not the stirring prose of a flavor text writer. Additional text would put psychological riders on that choice, which is something I'm not willing to do.

However, I'm not saying we'll never put flavor text on basic lands. "Never" is a long time. I think there could be good reasons to do it at some point, but it would take special conditions, and so far we haven't met them. Thanks for your question, Jack!

Real quick, I wanted to print this question from Andrew, as it sets up Taste the Magic's mission for the next several weeks:

Would Magic creative ever go back to a plane? From what I'm hearing, Shadowmoor is still set on Lorywn, but it's changed a lot. If you were to return to a plane, what would you do to make it different but still recognisable as it was printed before?
–Andrew D.

Andrew, hang tight. Answers to that are definitely forthcoming.

See you next week when I get to welcome you to the flavor of Shadowmoor, and talk about pendulums and payoffs. I'm so excited that I get to spill, finally.

(Special thanks to Brady Dommermuth for taking over Taste the Magic ! I wasn't slacking, I just needed a week off to deal with some creative text deadlines for upcoming sets.)