These were the instructions given to the artist:

"Color: Red
Location: Skirk Ridge.
Action: Show a goblin that has is hauling an armful of wood up to his cave entrance.
Focus: The goblin."

So the concept is, he's a burly goblin who has chopped down a forest and is bringing it back to his cave. The card was called "Lumberjack's Daddy" in playtest, a direct reference to Ice Age's Orcish Lumberjack.

Here is one of four preliminary sketches of the "Lumberjack's Daddy" submitted by Eric Peterson. The first three show the goblin marching through various environments carrying his armful of wood. After the art team's comments, Eric updated the final sketch to give the goblin a rusty axe and some rope so he can bear the wood on his back. After all that walking, he probably appreciates the new arrangement! Click the numbered buttons below to flip between the sketches -- it almost tells a story.... (Depending on your internet connection speed, it might take a few seconds for the image to change.) 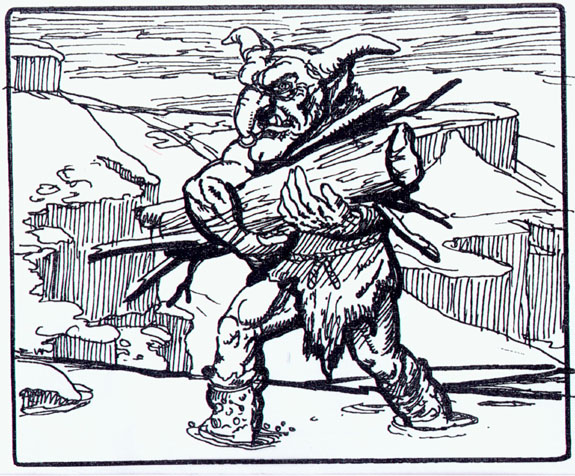 The final art for Goblin Clearcutter is based on sketch #4. He's got his axe and his makeshift backpack. And his tongue hangs out, almost as if he -- or Mr. Peterson -- is exhausted from the trek through those four preliminary sketches!

Finally, here is the card as you can see it in booster packs.