I get a warm fuzzy feeling when I think about this article. It's not that I dug deep into my soul, channeled my muse, or worked any sort of deep creative wonders. It's mostly about pride. Not pride in my work or my writing, but pride in giving a name and a banner to Magic players who have not been given their due attention or respect. The Vorthos is an important member of the Magic community and I am happy to serve them as one of their own. Ha! "Serve." That's exactly what happens in this article. I serve up a tasty array of little dishes that is sure to include some little tidbit that tickles your palate.

those of you who have not been frightened away, welcome back to Taste the Magic. Before we dive back into all things magically tasty, I want to address the surprisingly voluminous response to our kick-off article. First of all, I'd like to thank those of you who sent in ideas and topics for future articles. There's enough meat from just one day's emails to feed an entire year of articles. There are clearly some very hungry flavor fans out there. Secondly, I'd like to thank those of you who so graciously and enthusiastically welcomed me and our flavor-packed format to magicthegathering.com. And then there was Mr. Drearypants.

I did receive a few emails from him as well. He was annoyed by a perceived bias of flavor over mechanics. He was insulted by the phrases; “dead inside” and…. “Mr. Drearypants.” 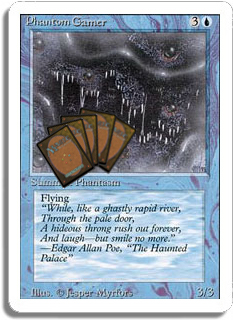 To tell you the truth, I am surprised to hear that he felt anything at all- because he was not supposed to exist! I thought we were poking fun at a phantom gamer, a fictitious grump, Magic's Kaiser Soze, a nemesis against whom all the flavorphiles could rally. (And rally they did!) The fact that there are people out there who identified with Game A and Mr. Drearypants is fascinating to me. Why would anyone prefer a game without flavor over the very same game with all the goodies?

There must have been a communication breakdown somewhere. Though I never said “It's flavor vs. mechanics, let's rumble!” that's how it was perceived. The fight I'm looking to pick is not flavor vs. mechanics, it's flavor vs. no flavor. Mechanics and flavor play together wonderfully in Magic. In fact, they each owe their existence to the other. They are most definitely not fighting in this column. Mr. Drearypants was NOT meant to be an analog for Spike. I work with some of the pointiest spikes in the world and even they respond to a cool name or a kick-ass piece of art. Sometimes it even… *gasp,* excites them.

So why, then, did so many Spikes still end up identifying with Mr. Drearypants? I think it is because many Spikey mtg.commers are not used to it when a column is not aimed specifically at them. It was clear to Spike immediately that TTM was going to offer very little information (OK, none at all) that would help launch him into the Pro Tour. Some Johnnies may have felt left out too, with no decklists or combo talk on the menu. Timmy was happy that we were talking about Serra Angel, and her super-sweet sword. But then she died and Timmy was bummed too.

“What are you doing, Matt? Why would you ever write a column that is not geared toward ANY Magic player? That's stupid!” Yes, it is, and I would never do that. First of all, I do believe that Timmies, Johnnies, and even Spikes do enjoy the mage-punk fantasy world flavor of Magic- even if it's just for an occasional snack. TTM will be here holding the cookie jar should they find themselves with a sweet tooth. Secondly, Spike, Timmy, and Johnny do not represent all kinds of Magic players. There is another type of player that is different from these three, and he's not some rare and reclusive guy who never peeks out from under his rock. He's right there in the game shop, at the convention, and at the tournament- and yet we've been ignoring him for years. His name is Vorthos.

Who the heck is Vorthos?

Vorthos (His name is actually John, but since there's already a “Johnny” in the mix, he opted to go with the name of his 16th level half-elven ranger/warmage.) is the guy who never puts more than one of any legend card in his deck because “it just wouldn't be right.”

He's the guy who will only play with the Icy Manipulator from Ice Age because it's the one they call the “Bone Crank.” He won't play with the Fallen Empires cards with the stinky alternate art. Vorthos is the guy who started collecting cards because he liked the art, then read some Magic novels, then saw his favorite characters appear on some cards and decided to learn to play. There are a lot of Vorthoses out there. Some collect cards, but might not even play. Some have a hoot getting artists to sign their cards. Some don't read flavor text 'til after they finish the novel in case it might spoil the ending. Vorthos understands that Magic can be fun even when you're not playing the game. This column is for Vorthos, but the real point is that there is at least a little bit of Vorthos in all of us. Put another way, while much of magicthegathering.com is about how you play Magic, columns like Making Magic, Latest Developments, and now Taste the Magic are about appreciating and enjoying the game regardless of how you actually play it.

I received plenty of email from Vorthos after my first article. He was stoked to see that finally there would be conversation on his favorite topics. He asked to see this, wanted to hear about that, was chomping at the bit to get a taste of anything having anything to do with Magic Creative (henceforth the term for all things flavor and fantasy in the game of Magic.) I am here for you Vorthos. While I can dish it out to you in huge piles, one article at a time, I have instead decided to finish up today by serving up little bits of many things instead of lots of one.

Occasionally, I'll have Magic cards step up to the plate. This is not another food metaphor- it's a baseball metaphor. I am in search of Magic card Home Runs. A Home Run is when a card name, flavor text, and art are all winners. That's three bases. The round tripper comes when all three of these mesh well with the card mechanic. This is no “live ball” era, true Magic home runs are very rare. Some great hitters just lack the power to put one out because they have no flavor text. Others can't make it around third base because I am a stickler when it comes to art and flavor text. Anyhoo, let's throw someone into the box and see how it plays out (OK, no suspense here… I have loaded this one with a Home Run to show you what one looks like.)

Let's start out with card name. Rancor packs a punch and doesn't beat around the bush. By definition, “Rancor” is bitter, long-lasting resentment; deep-seated ill will. I particularly like the “long-lasting” part – it really fits well with the “return Rancor to owner's hand” thing. “Rancor” is also a very well-packaged name. If you read my article, “Say My Name”, a while back you will know that a well packaged name fits the scope and cost of a card. “Rancor” is short and sweet, and the card is simple and costs only 1 mana. Winner. Take your base.

Art. This is an easy one. Kev Walker, in my opinion, (as if it isn't just about everbody's opinion) freakin' rocks! Sure, I could bust out some artsy-fartsy blather about what makes his art so great, but that's a topic for another article. For now let's just look at Rancor's art and appreciate it for its Bam! quality. Mighty Maro-Sorcerer in a rage blasting someone with green lightning- winner!

"Hatred outlives the hateful." Fitting for this card in the same way the definition of Rancor is. This card literally outlives the creature it enchants. Smooth. This flavor text is also cool because, unfortunately, this statement is too true. Without getting into some philosophical whining about the nature of things, let's just say that it stinks that ill-will can be passed on from one generation to the next. Winner.

We've already seen how the name and the flavor text mesh wonderfully with the card mechanic. Oooh! Did I say that? Yes, I did. The card mechanic. See, flavor and mechanics do play in the same sandbox. This gives our boy, Rancor, the extra pop off the bat to put this ball in the seats. Oh, and the card is an all out bomb. Going, going…10 rows deep into the second deck! 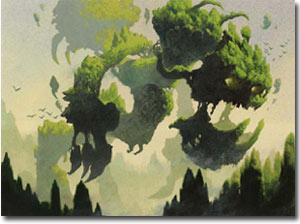 Among the emails I received this past week was a special one. It was from someone many of us already know- Sekki, Season's Guide.

Dear Magic Creative,
For a while I thought you guys were awesome. You took my bland life of guiding the seasons (Spring, Summer, Autumn, Winter, Spring, Summ…) and turned things upside down with the Kami War. During the war, all bets were off and I could get crazy and follow Spring with Winter, Summer with…more Summer. It was a madhouse! For the first time in a million years I was having fun. Then you go and end the War. Now it's back to the old grind. Anyway, I can guide these dumb seasons in my sleep. Is there anything you guys can do to give me something else to spice up my tedious existence?
- Sekki.

I felt pretty bad for Sekki. I couldn't do the same thing over and over all my life and be happy either. So I got to thinking. I received a whole bunch of other emails with questions about how to pronounce Kamigawa black card names. Sekki is from Kamigawa, so I decided to charge him with helping us out with the tough words. He was very excited to inform me that he is not only a whiz with the words of Kamigawa, but with the pronunciation of almost all words. So TTM is proud to introduce you all to our new correspondent:

You can expect similarly formatted tidbits of info sprinkled into TTM articles in the future. Sekki will undoubtedly reappear, Magic Mailbag will bust out any messages we get from our cardboard enshrined friends, and we'll continue hunting down Magic Home Runs (I already know of a couple coming up in Ravnica. We'll see those soon enough.) Be proud Vorthos, and hold your “Every-Art-Has-Gerrard-In-It” deck high!