bad enough you had to walk the plank, but then you died five times before hitting the water! How could such a thing happen?

Get ready to settle the ultimate rivalry, Magic style, with Duel Decks: Pirates vs. Ninjas!

With such awesome power in your hands, who will you choose? Will it be those elusive masters of fear and subterfuge? Across the entire known Multiverse, only one ninja has risen to legendary status. (Well, only one blue ninja, so obviously you’re going with that one rather than settle for some second-rate leader.) Choose the path of the ninja and this legendary villain shall lead your shadowy forces.

See him in all his special promo awesomeness! 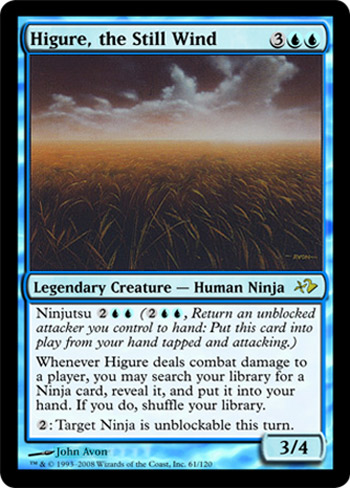 What’s that you say, there are two (blue) pirates of legendary status? Good point!

See the other alternate art promo that will lead your treacherous ninja forces to ultimate victory. 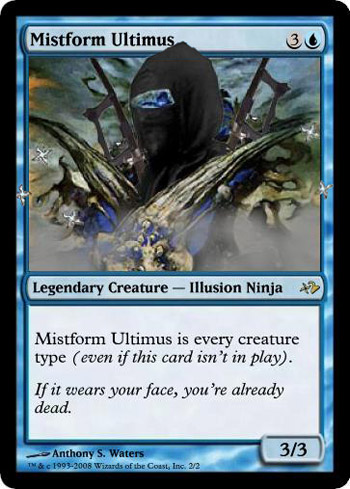 Normally we wouldn’t be able to show deck lists for a product this far out but let’s face it, none of you are ready for this level of awesomeness. So, in an act of mercy, we’re going to show you the deck in all its glory. Behold and tremble, for you are not worthy (yet) of such cool awesomeness.

You were warned! But wait, the awesomeness doesn’t stop there. Who can possibly hope to stand against such epic power? As you already know, the answer can only be Pirates! (And not just because that’s the name of the product!)

In a game with thousands and thousands of creatures, only one Pirate’s dread exploits have risen to legendary status. Click here to reveal the notorious captain of your crew! 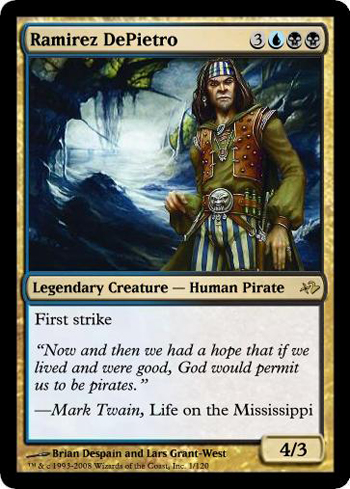 Still not impressed? How about another rare alternate art promo to lead your salty sailors!

See the other Pirate promo! 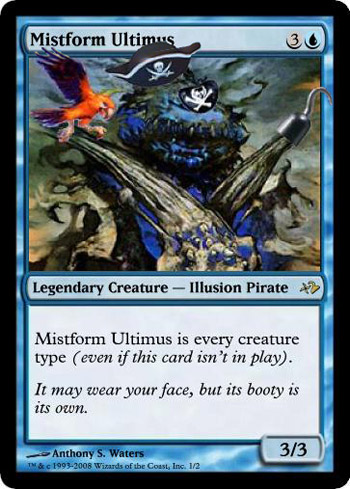 That’s right, Dual Decks: Pirates vs. Ninjas features four awesome alternate-art rare promos! Obviously you’re blown away at this point, and you haven’t even seen the other deck list yet! 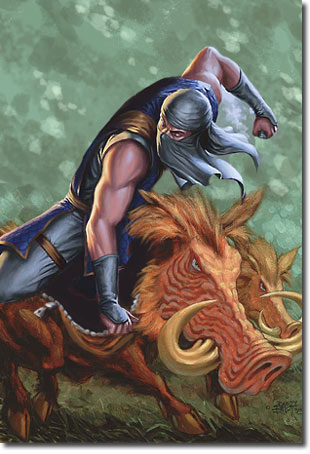 Duel Decks: Pirates vs. Ninjas contains two ready-to-play 60-card decks and a strategy insert to get you up and running immediately. And, as part of our new “The Customer Is Always Right” initiative, Pirates vs. Ninjas contains a truly extreme quantity of awesome rare cards! The message boards spoke up and Wizards of the Coast has definitely listened. (Suggested Retail Price of this product is still to be determined)

Just imagine the fun you'll have playing with these decks! You can pretend that one player is a rollicking, raging group of seventeenth-century pirates that has somehow found its way to fifteenth-century Japan and is engaging in magic-aided raids that are being foiled by hordes of ninjas! Or go the other way, and assume that your ninjas have gone forward in time and are trying to stop the pirates' raids on innocent villages! For that matter, you could pretend that both the ninjas and the pirates are in outer space or something. Frankly, it doesn't really matter to us. Go nuts.

As part of the awesomeness, we hired a special ad agency to produce an awesome commercial to fully channel the awesomeness. The agency dared to enter the secret enclaves, meeting with representatives from the pirate and ninja communities to get their opinions on this eternal struggle.

So get your hands on Pirates vs. Ninjas and let the epic contest begin. Who will win is up to you, but either way come September 19 you’ll definitely be seeing Shuriken!

September 19 is a long time from now, so in the meantime we’re going to give you even more awesomeness to tide you over. Think Duel Decks: Ninjas vs. Pirates is awesome sauce with a side of kickass? Well, we’re not done yet, because right now you get to use your voting power to let us know which of the following incredible ideas you’d like to see for future Duel Decks products. Got something even better that we missed? (As if!) Post it to the boards, discuss your favorites, and we’ll be back tomorrow to show you how it all turned out!