say a picture is worth a thousand words. Since these articles are normally between 1500 and 3000 words, I guess all I have to do is show you 2 or 3 Style Guide illustrations and call it quits. But I would not do that to you. I have already made you wait an extra week so I could clear up some stuff I should have communicated in Style Guide Part 1. No, you will not just see 2 or 3 pictures, but many, many fine works of artistic and conceptual wonder. Let's tarry no longer and get right to the good stuff. 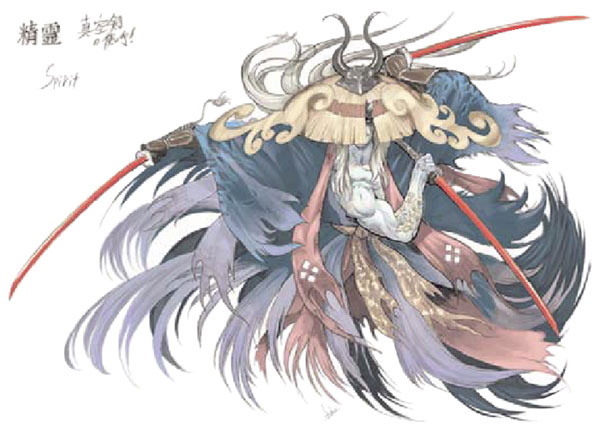 This is one of many Kamigawa concept drawings that did not quite make it on to the cards. Still, I thought it was cool enough to toss at you anyway. The picture is cool, but I only put it in there to give you something to look at before I started babbling again. We're going to be looking at a lot of art, but we're also going to chat about it as well.

Let's begin where we left off. Style Guide Part 1 was about all the stuff in the Style Guide that does not change from one set to the next. We ended that discussion with a look at the color pie and the characteristics of each color. The very next page in the style guide is the section called “General Notes.” It's the page, or pages, that sum up in words the basic underlying theme of the new setting. It could be a paragraph or two describing a Japan-inspired fantasy world wherein the living world and the spirit world are at war. Or, it could be a few pages outlining the different guilds that angle for dominance in a wildly overdeveloped city with old Eastern European flavor. Or, it could be just like this snippet below: 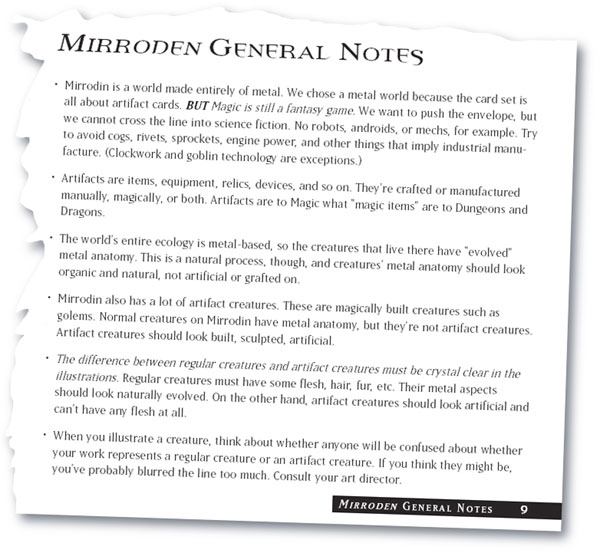 Yup, there it is, straight from the “Mirroden” Style Guide. That little thing, the spelling of “Mirroden,” has some real significance. Notice I did not call it a misspelling. Sure, there are plenty of misspelled words in Style Guides– they're not official products and therefore not subject to editorial process. (See the color pie in Part 1 for a dose of such misspellings.) Mirroden speaks to the fact that the style guide is not a rigid law book, but a living document that only looks to point Magic in a particular direction. It's up to the artists, designers, and writers to do the driving.

In our Style Guide overview at the beginning of Part 1, I cited Ice Age's Balduvians as an example of lack of focus. On a card-by-card basis, it is arguable whether or not a focused look fostered by a style guide is good. However, set by set, year after year, it is clear to the peeps here on the Creative Team that focusing on a theme and digging deep down into it is better than scooping out little holes all around that theme. Let's take another look at our Balduvians to see what I am talking about. 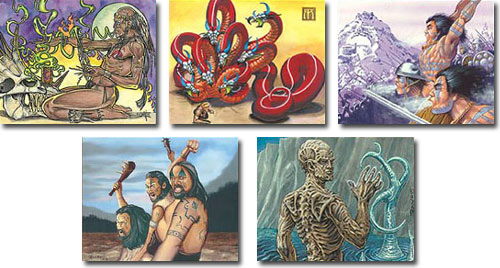 The characters and settings are a little random here. In contrast, let's take a look at 5 Leonin cards from Mirrodin block. I know this comparison is a little tilted- the Leonin are all Lion people, while the Balduvians are mostly different. But, I maintain that they are mostly different because there was no Style Guide and nothing in place to tell the artist not to depict a firecracker red hydra on yellow background in an Ice Age setting. Anyhoo, enjoy these 5 lion folks. 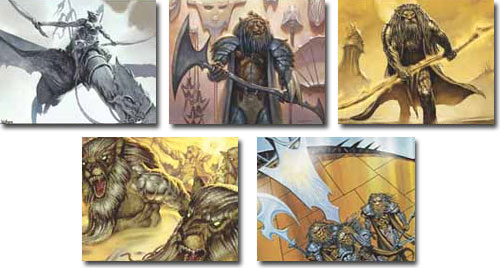 This is the sort of unity that's possible with a style guide. Artists do not struggle with figuring out what their own special brand of metallicized lion people look like- they get to concentrate on good composition, color and mood. Take a look at Todd Lockwood's awesome concept work for the Leonin. 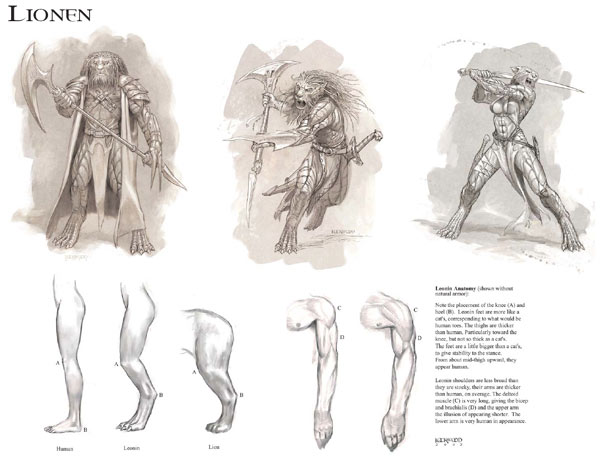 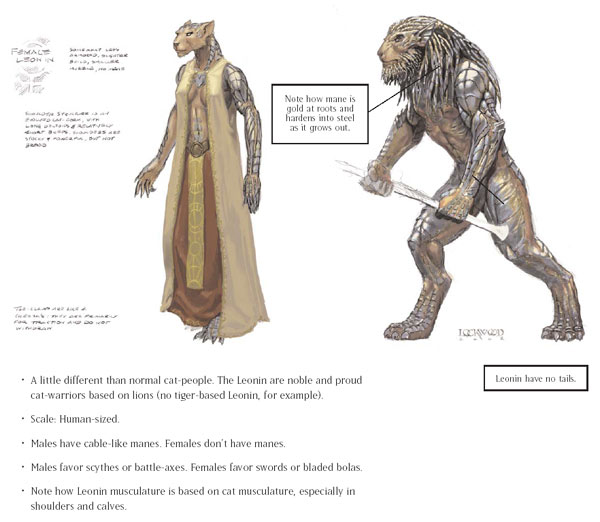 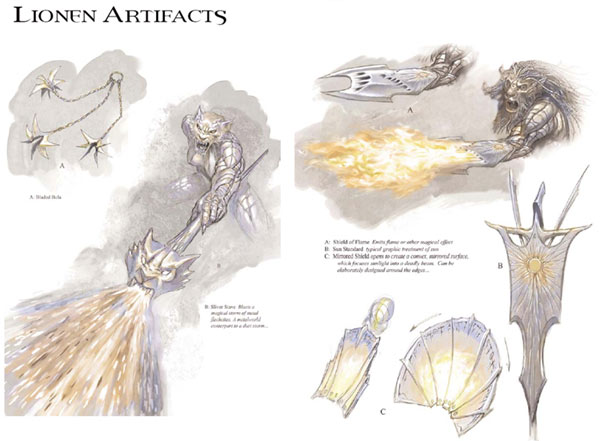 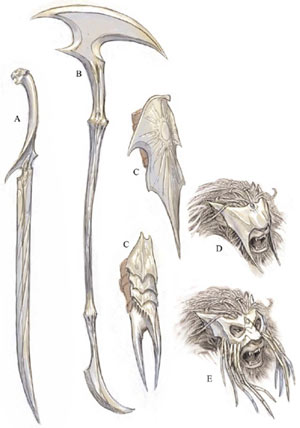 The real benefit (other than the obvious benefit to visual cohesiveness) to digging down deep into these Mirrodin Cat folk is that it leaves us open for cat people of different looks in the thousands and thousands of cards we will make in the years to come. Focusing hard on the look of these metallic Lion people leaves us open to doing other cat concepts, like black panther people, tiger folk, or miniature lynx-lings. It also keeps us from stepping on the toes, or rather the paws, of the past; (Mirri, Cat Warrior, Cat Warriors, and Panther Warriors for example)

The Leonin stuff does not stop just at the look of the race itself. Todd drilled way down, doing detailed renderings of Leonin weapons and artifacts as well. I have seen a lot of Style Guide art, and this stuff is some of the very best.

Style Guides help us plumb out all the goods in a particular concept, saving the other stuff for later. This may seem like picking nits for something as pigeon-holed as cat people, but what if we were talking about something more important to Magic, and closer to your very own heart, like angels, or elves, or goblins?

If we look at the different goblins from throughout Magic history we'll be able to see that, since we started using the Style Guides, there is a difference in the goblins of one set from the goblins of other Magic sets. If we had no definition of what they looked like block to block, we would not be able to tell the difference between a mogg, akki, or mercadian goblin, and the goblins of all Magic sets would blend into one unintelligible hodge-podge. If artists had free rein to make their goblins look any way they wanted, there would be so many different looks that none of them would really mean anything. As it is now, the look of a goblin communicates its time period, place of origin, relative nastiness, intelligence, size, and propensity for blowing things up in their own faces. Let's take a little style guide tour through some goblin concepts throughout the last 6 years or so, and some of the cards that have come from them.

Moggs are one of the most easily distinguished goblin concepts Magic has ever had. Their thick skulls and hunched backs are easily spotted amongst other less bulky goblins.

Mercadian goblins are a real twist. Not only are they tall and lean, and somewhat stately, but they are also NOT STUPID. That's a real curve ball, since goblins have been Magic's jesters and comic relief since the beginning. This was an interesting change of pace for our little red pals.

This leads us to the most unique of all goblin strains- the Akki. These goblins are an adaptation of impish creatures of Japanese legend. Since Japanese lore does not have a close goblin equivalent, the whole goblin concept had to be stretched a bit to both fit Japanese flavor and retain some goblin flavor.

This concludes out little tour of the Goblin wing of the Style Guide Museum. I hope you found it both entertaining and educational. Sure, it's cool for you to learn a tidbit or two about different goblins, but I really hope that you can see how these rich goblin races are possible only by using a style guide. There is information overlap within each goblin type that would not exist if each and every goblin started from its own blank slate. On your way out, please consider making a donation, our Goblin Wing is about to add 15 new wax figures to the “No Longer Standard Legal” exhibit.

Before I cut you all loose this week, I wanted to give you a peek at some Ravnica Style Guide images. Ravnica is all the talk around town right now and I wanted to get in on the action a little more (some of you may have spotted a little piece of Ravnica art snuck into last week's column.) The coolest visuals that Ravnica has, in my opinion, are the lands. The Style Guide relies heavily on land art to convey a sense of mood and place for a card set. Artists extrapolate a lot from what they see in the land concepts. Is this place tranquil, or is it in turmoil? Where do the creatures live in this place? Are they hidden, or are they constantly at odds with each other in the open? What sorts of creatures thrive in a place like this? All this stuff gets answered when we get a peek at the lands. So, without further drivel…Ravnica land concepts: 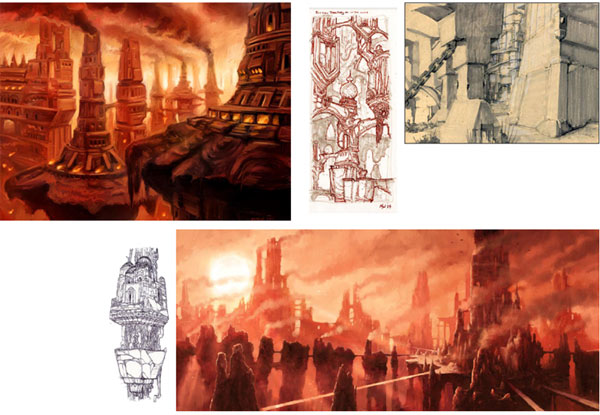 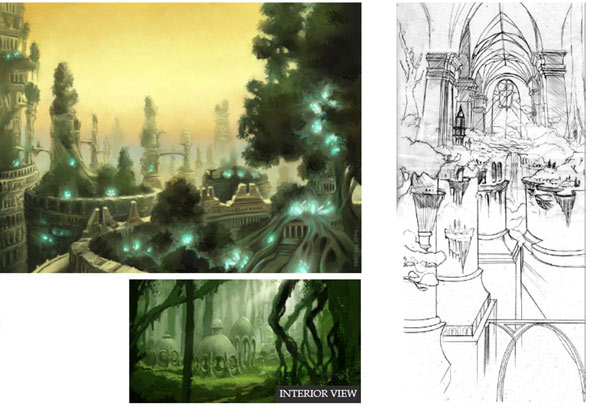 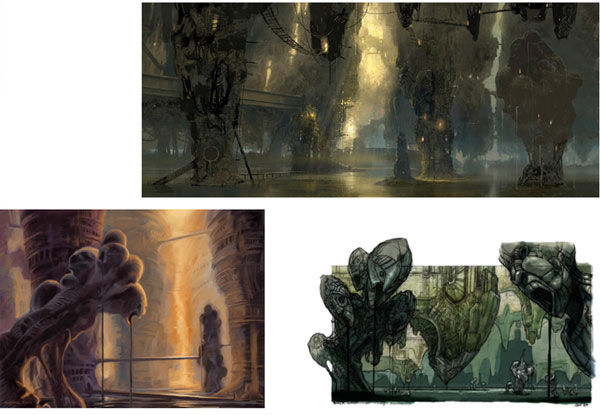 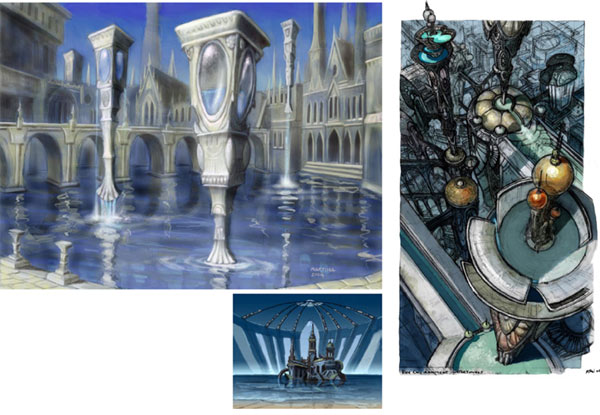 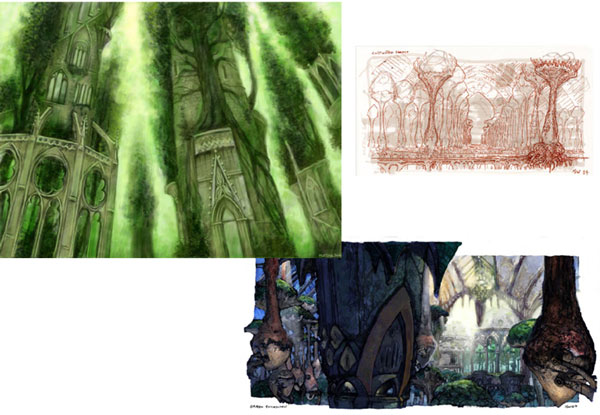 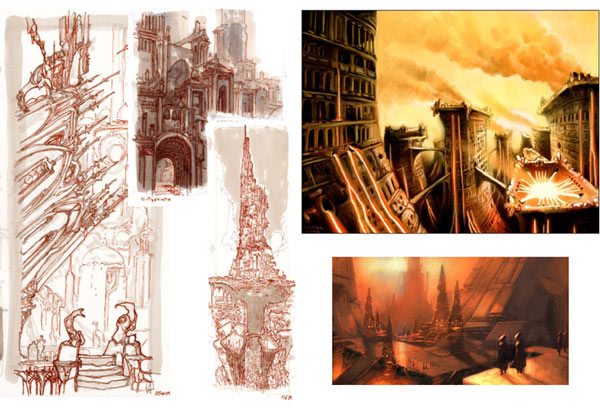 What do we learn from these Style Guide concepts? Ravnica's a different sort of playground boys and girls. There's not a lot of room for tossin' Frisbee. It's cramped and busy, and people are going to be all in each other's “personal space.” And you know what happens when nobody has elbow room…the pushin' and shovin' starts. In just a few days you'll be able to see what was created from these concepts. Beauties, beasts, clashes and collaborations. Intrigue, politics, treasures, battles! See all this fun stuff play out at the Ravnica pre-release this weekend. A good time had by all, except the poor sap to whom you will serve up some serious guild beatdown. Will you enlist the Boros, or secretly contract the Dimir? Will you join the Chorus of the Selesnya, or dig for the golden dead in the Rot Farms of the Golgari? Me? I will probably play as many times as it takes to get a taste of all of them. (Secretly, I won't choose sides ‘til my favorites come up in Guildpact. Then it's all the way with the home team, baby!)