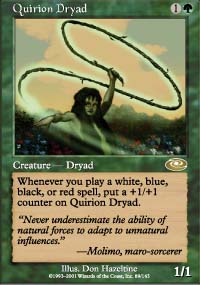 Four weeks ago, Alan Comer showed up at GP Las Vegas with a ten land deck of Merfolk, cantrips, and a rare from Planeshift that you couldn't trade to even the most impressionable of little kids. One month later it is the most popular deck in the field. It appears the only thing that grows faster than a Quirion Dryad is this decks popularity.

It was obvious upon showing up for GP Houston that the deck would be popular on Friday. Nobody expected the deck to show up in the numbers it did. 25 of the 64 decks on day 2 are Miracle-Gro decks of some type. That is over a third. Few decks have ever attained the level of popularity at a tournament. The Donate deck that many thought was too good for extended is practically nonexistent in the current metagame now.

Perhaps the most interesting thing about the deck is the amount of changes it has gone through in such a short time. It started with Mike Long who amazed the skeptics of the deck in Japan with his first GP Top 8 in some time. Long made several changes to the deck that have become standard. He changed the creature base to green creatures that would hit harder like Werebear and Wild Mongrel. He also played Waterfront Bouncer, which is still in most versions of the deck.

GP Houston introduces a new evolution in the deck, Super-Gro. Ben Rubin and Brian Kibler radically changed the deck once again. This time they added a third color, White for Mystic Enforcer and Swords to Plowshares.

How does this affect the deck? Swords to Plowshares gives Super-Gro access to the most powerful removal spell in the environment. As extended evolves this season, creatures are continuously proving to be one of the most powerful factors. Miracle-Gro's worst matchups are decks like PTJunk that can both match the deck's large creatures with its own as well as cheaply and effectively remove Gro's threats. Previous versions of Gro have contained very little in the way of creature control. All the original could hope to do before sideboarding was counter an opposing creature or grow a creature that was bigger. Long added a pair of Bouncers to aid the deck against other creatures, but they are no STP. 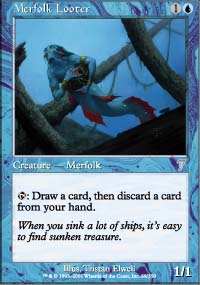 The big advantage of Super-Gro is clearly the Mystic Enforcers. Enforcer is quickly gaining its recognition as one of the strongest creatures in extended. It's a four casting coast 6/6 pro black "dragon" with the minor technicality of requiring threshold. This has hardly been a problem for the average extended deck containing Enforcer. Most Junk decks are getting wise to the power of Enforcer in their decks. It has replaced Spiritmongers in many current versions of the deck. In the Rubin/ Kibler version of Gro, it provides a creature that can only be stopped by Swords to Plowshares or another Enforcer.

Another big change to the deck is the readdition of Merfolk Looter, a card that Long removed from the deck. Perhaps this is to make up for the removal of Curiosity. With 14 lands instead of the normal ten lands the deck plays, it seems the deck could end up with useless cards in hand. This could also possibly be alleviated with Waterfront Bouncer, but it appears Rubin and Kibler prefer the Looter as a fix.

The changes aid Super-Gro in two of normal Grow's few sketchy matchups. The Junk matchup and the mirror match. The results have been very good. Most of the pros playing this version of the deck are at the top of the standings at this GP. It seems very likely that at least two of the top 8 decks will be the Super-Gro variant of the deck. The deck seems to be less of a metagame improvement and more another step in the decks evolution by giving it more powerful and versatile cards.