friend Brian David-Marshall recently found himself on the wrong side of a ten-beer bet with Scott McCord. I don't really understand the details myself, as Magic: The Gathering is my game rather than some competition involving bats and pitchers (cricket maybe?). Even if I could describe the basis for their wagering, this is a Magic site and you've probably already lost interest. The important things are 1) BDM was down ten brews that he didn't want to pay up on, and 2) he bet on the Metropolitans, and was damned from the outset (should have known better, especially being a lifetime New Yorker).

So Brian, creative and devious as he is, with an inside track even more inside than most, summoned all his forbidden knowledge as the Pro Tour Historian to create a snare whose tendrils would play directly and specifically into the quirks and foibles of the otherwise clever McCord.

"I bet that you will regularly first pick a green card in Planar Chaos draft."

If you don't know anything about Scott McCord, let me give you the crash course quickie. Scott was a highly capable gravy-train Pro for some years, with multiple Grand Prix Top 8 finishes, a Top 4 at Pro Tour – Boston with team Slay, Pillage, Gerard, and an appearance in the team Masters series a year earlier with team Slay, Pillage, Massacre. His early mentor was Brian Weissman himself, so Scott has particular ideas about Magic that are foundational, fundamental, and – for him – essentially immutable. Though he made a conscious decision to quit playing Magic at the highest levels a few years back, nobody quits forever, and, like many of the former New York-area elite (now professionals and adults), Scott squirmed and dribbled back into playing for fun with friends, if not regular tournament competition. Scott remains fierce and opinionated – and fiercely opinionated – and still enjoys draft. Today, Scott is (once again) one of the most successful players at Neutral Ground, using strange and oblique technologies that elicit head scratches, confusion, or ill-placed derision from lesser magicians.

For example, Scott was first picking Counsel of the Soratami in Kamigawa, and routinely elects to go second. As is probably obvious, he loves a card in hand, and the color blue more; Scott generally abhors, or at least scoffs at, green. Did you just get shipped a second-pick Spectral Force? Look to your right: If Scott is there, it's possible he just took a Think Twice... 8/8 for five? Bah! There's no way he would have let a Fathom Seer pass.

Without violating his NDA or anything, what kind of knowledge would BDM have had to have to try to reverse his ten-beer deficit in this way? Check out : 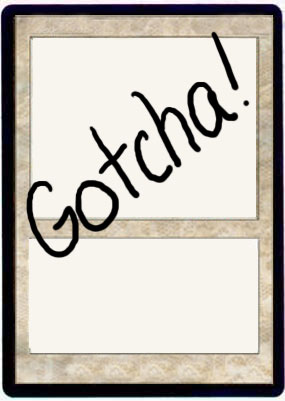 You're not getting off that easy.

As Magic R&D has been defining and re-defining the color pie, tweaking the power level of Constructed – especially Standard – Magic, green has slowly been picking up powerful effects from other colors. Was Naturalize first? For a long time, Disenchant was the most successful card in Constructed Magic. In the same set, green got Krosan Tusker – a very green look at the "Fact or Fiction" school, and probably better in the abstract than tournament staples like Compulsive Research and Thirst for Knowledge – as well as Hystrodon, an early look at the green Ophidian. Today, green has an option even better than the original Ophidian. In Mirrodin Block, you could make the argument that Oxidize was the green analogue – yet functionally superior – to Swords to Plowshares.

Was and is green creeping, doppelganger-like, into the skin of the legendary maverick Brian Weissman?

Is the next step? 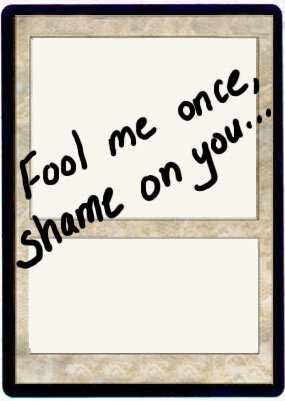 The other day BDM and I were talking about Groundshaker. The original red Ball Lightning was a fearsome threat, to be sure, but we weren't certain about a green reprint.

"What are you supposed to do? First-turn Elves, second-turn this thing... Bash for six... Is that even good?"

"I mean in red, six damage is a lot. Like if you ever got hit by a Genju of the Spires, let alone a Ball Lightning, you were basically dead, right? When you start at 14, it's pretty easy for them to finish you off with any beatdown and a couple of burn spells... But green doesn't have any burn spells. It just seems like you'd run out of cards."

Okay, okay already. No tricks this go around. Third time’s the Dawn Charm. 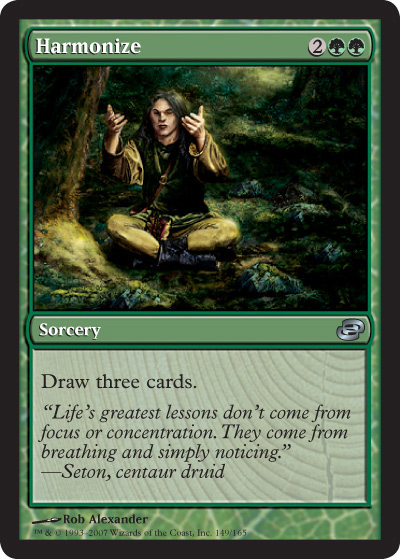 Planar Chaos describes a world where Wrath of God is black, Akroma is red, and apparently, Concentrate – like Ball Lightning – is green.

You should be able to see why a card like this one would appeal to Scott. He might willingly avoid an expressly powerful singular threat like Spectral Force in exchange for cleaning up all the blue – and, theoretically, a better deck – down the river, but regardless of the shape and color of its mana symbols, Harmonize is as (traditionally) blue as draft cards come. In Limited, Harmonize actually creates an interesting tension. Usually blue card drawing is good in Limited because it increases the consistency of a deck and helps a player to hit land drops as he progresses with what tend to be small evasion creatures. However, in Time Spiral, a big question is "Can you deal with the green fat?" What happens now that blue-style effects will be powering out Baloths? How significant will green's ability to force out card drawing more quickly affect the synergies?

In Constructed, Harmonize is a curious card that has some existing pedigree, due to the positioning of predecessor Concentrate. Concentrate was played as a four-of in Osyp Lebedowicz's Top 8 Psychatog deck at Pro Tour – Osaka in 2002. Probable 2007 Hall of Fame inductee Kai Budde would later recommend a Psychatog deck with two Concentrates for Regionals 2003; this second deck is particularly significant because this was an era when Psychatog players could pick from Compulsion, Deep Analysis, Shadowmage Infiltrator, Standstill, various Looters, and many other options to draw extra cards. That Concentrate was deemed good enough by the then-best player in the world in the face of such competition is telling... Harmonize – at least as far as I know – will not have such steep competition for that it is doing in its (new) color.

For certain green is bleeding into blue's territory with Harmonize, but the question of whether it bleeds far enough to use card drawing as blue traditionally has doesn't even have to come up. You see, card drawing has changed its role in Standard to a great degree due to the alterations in the color pie and the removal of Counterspell. Look at a deck like This Girl, the Brian Kowal-designed U/R/W Angel hybrid I used to win the New York State Championship in 2006:

Blue is in this main for its superior selection capabilities, not to counter spells... I didn't even play the otherwise ubiquitous Remand!

You can make an argument that from a non-permission "blue" basis, green is (or at least can be) better than blue. The reason is that green has the best early game mana acceleration in modern Magic. Ophidian was close to unbreakable in 1997, but Birds of Paradise, Llanowar Elves, and even Boreal Druid can power Ohran Viper out on turn two. Most every control deck since Ravnica became established has been playing four, six, or even more Signets... Green can play Signets, too, but instead fix with the at least arguably superior Farseek, Rampant Growth, and Into the North. These cards give a similar level of accleeration, but also thin the green deck of mana and shuffle it.

What about the "burn" aspect of green in Planar Chaos? Groundshaker started our exploration of these themes, and is joined in Standard by Giant Solifuge, Timbermare, and maybe more. When Ball Lightning was big in Standard, it was essentially a burn card rather than a legitimate creature. Like most burn cards, Ball Lightning was a short-term packet of damage with a lot of impact, but did not block... or even stick around through to the next turn. In recent years, dedicated burn decks have only reached the top tiers of competition with the help of Sensei's Divining Top to regulate the draws of sufficient burn and sufficient mana to play that burn. With Harmonize in green to help keep a deck going as it "spends" Ball Lightnings and 5/5 Blinding Beams with probable short term expiration dates, it is entirely possible that this new element will help enable a very different archetype for offensive Mono-Green.

It's a strange world out there, and getting stranger by the minute.