, Johnnies, to a very special episode of House of Cards. It's Timeshifted Week here at magicthegathering.com, and I'm going to take this opportunity to talk about one of my favourite old cards. It's not Squire, although I have used that card in one my columns due to its arguably monosyllabic nature. The card I'm going to look at is weird, he's wacky, he's completely off-the-wall-for a blue card. He's only been reprinted in Core Sets eighty-nine times and functionally reprinted a couple times. He has many aliases, such as Zuran Spellcaster and Rootwater Hunter. And, of course, there are some who call him ... Tim.

You might've heard of him. He's the Prodigal Sorcerer.

When Will Then Be Now?

Soon! But first, a deck! Here's a little ditty I picked up from Redland Jack, the superhero alter-ego of mild-mannered deckbuilder Robby Bullis.

In Robby's words: " This deck is pretty simple. Note that it doesn't stop other combos (it's not really a 'combo killer') and I wouldn't say that it pulls out an awesome combo (there is no 'killer combo'). Instead, 'combo killers' refers to the fact that every card pairs with another to 'destroy' a creature every turn."

The killer combinations include Imagecrafter + Dwarven Demolition Team, a combo that Robby says is an old favourite of his. In case you don't how this works, what happens is that the Imagecrafter convinces a creature to renounce its creaturely heritage and take up life as a Wall. (Yes, it works. Check the Oracle text!) This is a pretty dull way to live-just ask your nearest Wall. Or Freddie Prinze, Jr. So when the Dwarven Demolition Team hits the scene and starts doing what it does best - destroying Walls -well, you're basically just putting the poor creature out of its misery.

Another slightly more complicated killer combo involves perhaps Ravnica's most beloved card, Instill Furor, as well as pair of wily Wizards, Rimewind Taskmage and Simic Guildmage. The trick here is to make your opponent's creature furious but tapped at the same time. That way, the creature will be so frustrated by its inability to attack that by the end of the turn it will be thrashing around like a caged animal and will eventually wear itself out and die. At this point, when the Instill Furor end-of-turn trigger goes on the stack, allow your Simic Guildmage to move the enchantment to some other creature. Your opponent loses a man, but you maintain your ability to outrage the rest of them!

The next combination of killers is very similar to the last, except it's totally different. The first thing you have to do is freeze one of your opponent's creatures solid, with Frozen Solid being the most likely candidate for this particular task. Then, use ol' Sparky Sparksmith to ping the frozen creature. Instead of just melting the ice, as you would normally expect, adding heat to the frozen creature instead shatters it into sparky smithereens. At this point, when the Frozen Solid ability-thingy triggers and goes on the stack, make your Simic Guildmage move Frozen Solid onto another one of your opponent's creatures. The previously frozen creature will still end up in smithereens, and you'll have frozen another creature solid!

The genesis of the deck came from Robby's discovery of the next murderous duo: Neurok Transmuter and Arcum Dagsson. The Transmuter can turn a creature into an Artifact Creature, while Mr. Dagsson can force a player to sacrifice an Artifact Creature. After all, the Coldsnap Legend is the Master of Sleighs, Whistles, and Weathervanes. With an arsenal like that, you just know there's going to be a bloodbath. Robby added the Heartseeker (which, by the way, forms an awesome combo with any creature!) because, as he says, " it fit the theme, plus it gave Arcum something 'positive' to do instead of just being a murderer." Amen to that! " Once you clear the way, your mighty Blue-Red assassins can start swinging for a massive 1-2 damage each!"

Good stuff! It's always nice to see Magical creatures working together. You scratch my back, I'll scratch yours, and maybe afterwards we can kill a guy. That's freakin' teamwork! One of the things I like most about Robby's creation is that it brings back memories of one of my earliest decks. That deck demonstrated a little unbridled optimism on my part, with its Bond-villain-esque creature-killing methods. In my defense, I also played with Terror, but it was the unnecessarily convoluted double-Prodigal Sorcerer + Sorceress Queen kills that got me really excited. If it sounds familiar, I wrote about it way back during Vampire Week.

As with Robby's deck, this one also had a number of tag-team contract killers, the Dominarian equivalent to Jules Winfield and Vincent Vega, a Royale Assassin with Cheese. You could use two Tims and a Sorceress Queen, as I mentioned. Or one Tim, a Queen, and a Norritt. Or one Tim, a Queen, and Jandor's Saddlebags. Or Nettling Imp and Royal Assassin ( offer not valid in Serra's Realm ). Or Nettling Imp, Sorceress Queen, and Sengir Vampire. You could even bump off opposing critters (I always liked killing Personal Incarnation) with the aquatic assassinatorial stylings of Merfolk Assassin and War Barge, a pair of cards that have, coincidentally, traveled through the wormhole and ended up in Standard with the rest of the timeshifted Cards.

Luckily for us, there are many more creatures that like to get together and send their enemies to the grumper. Luckily for me, several of those creatures can be found among the Timeshifted 121. There is, of course, Merfolk Assassin and its inanimate partner-in-crime, War Barge. Without the Barge, the Assassin is pretty bad, a hard-to-cast Vodalian Soldiers with a mostly-useless ability. The Barge can be good on its own, though, as long as your opponent is playing with Islands. You can (shockingly) activate the Barge targeting your own guys, making them unblockable. If your opponent isn't playing with Islands, then you can summon forth some old school Magic and give him one. Ancient mages used Phantasmal Terrain to enable their Islandwalkers and various stay-at-home Serpents. Nowadays, you can use Sea's Claim to get the same effect for half the price. 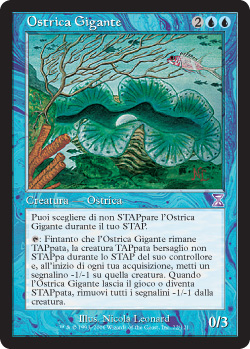 Much more menacing-sounding In keeping with the sea creature theme, there are two other cards that I want to add. The first is Homelands' Giant Oyster, a card that always makes me chuckle. It's some combination of the artwork, the fact that the only one I have is in Italian (the much more menacing-sounding Ostrica Gigante), and the fun I have imagining, say, a Grizzly Bears trapped inside an unusually large clam. The second seafaring creature is Pirate Ship, or Tim, Sr., as I like to call him. Pirate Ships are just plain cool, although I wouldn't want to be born on one. It sounds like it would be very unpleasant.

The other timeshifted assassin that is going to fit in to the deck is Ice Age Legend Merieke Ri Berit. She's really not an assassin. She's one of a number of creature-stealing blue and white creatures like Seasinger, Old Man of the Sea, and Preacher. Normally, if you remove the Seasinger, your opponent gets his or her creature back. Not so with Merieke Ri Berit. Probably because she's one-third black, ol' Merieke makes quite a stink when your opponent tries to get his creature back. The stink is lethal. The creature, whatever it is, dies if Merieke dies, or if Merieke becomes untapped-something she can only do with a little help from her friends.

Rimewind Taskmage ties all of the creatures together. He's the workhorse of the team and has the respect of everyone in the locker room. He can tap creatures for Giant Oyster or untap the otherwise untappable Merieke Ri Berit. Besides that, the Taskmage can allow you to get double use out of your creatures with tap abilities, like Tim, Tim Sr., Merfy, Heidar, and Mangara of Corondor. Since the Taskmage is so important, I've also included a set of Magewright's Stones, the Jandor's Saddlebags of the 21st Century.

... and its name is Tim. One of the problems with Prodigal Sorcerer is that he's not the most efficient win condition on the planet. Sure, he's a relentless killing machine, and if left unfettered he'll kill your opponent all by himself. He just won't do it very quickly. The man knows how to pace himself. Slow and steady wins the damage race. Over the span of twenty turns, Prodigal Sorcerer will slowly and inexorably finish off your enemy. Unfortunately, in between each of those twenty turns, your opponent, malicious spoilsport that he is, will be trying to kill you first!

Until last time, have fun with Darien, King of Kjeldor!