Come explore the nods to nostalgia in our museum's new Planar Chaos wing.

elcome back to the Time Spiral Museum. Since your last visit, we have installed a whole new exhibit. This will not look exactly like the Time Spiral wing, but it will be just as fun and informative. If you have ever been to a science or natural history museum, you have probably been in an exhibit like the Planar Chaos Exhibit. It's not a series of focused installations with in-depth information and an audio track. It's more like the big free-for all room in which there are tons of fun and informative displays meant to pique your curiosity and inform you quickly. This is how the Planar Chaos Exhibit is going to work.

Just to refresh everyone, I want to reiterate the reason why we're visiting the museum… again. The Time Spiral block is an extension of the history of Magic. To really appreciate it in all its facets, you've got to know a thing or two about Magic's days past. That's where the museum comes in. The museum is not here to show you every little crumb of history on every single card. Our mission is to show you how history is deployed in Time Spiral block cards so that you can hunt down the rest on your own. Without knowing anything about Magic's past, you can still play the historian and follow all the crumbs back to the tasty cookies of history. All you need are your Time Spiral block cards and this link to Gatherer. It's all in there, so let's begin.

Planar Chaos's "timeshifted" cards are a wonderful source of historical connections. This is because they all have a built-in mechanical reference to an older card. Some of these references are obvious and others are shrouded. You'll have fun hunting them down on your own, but here in the museum we're handing them to you. Anyway, back to Revered Dead.

Ah! Revered Dead is a white version of, um… one of these cards. So which one is it? The name, obviously, is a nod to the Restless Dead. But the flavor text is a lightly veiled reference to Drudge Skeletons.

Drudge Skeletons:
Bones scattered around us joined to form misshapen bodies. We struck at them repeatedly-they fell, but soon formed again, with the same mocking look on their faceless skulls.

Revered Dead
"The mists coalesced into silent warriors. We charged them and broke through their lines, only to see them swirl and re-form behind us." -Golas Mahr, black knight

So what's the deal with the "dead"? Are they an alternate reality version of Drudge Skeletons or Restless Dead? The answer is the Drudge. Given the quote from Golas Mahr, a Black Knight, we know that the Restless Dead have had run-ins with black knights-who are from Alpha. And so are Drudge Skeletons. The name Revered Dead is just a little wink at the functionally identical Restless Dead.

Check out this Wild Pair triptych (which you may have seen when it went on tour). Few words, but still very interesting.

Ha! (The beast and the tree were not chosen randomly-note their total power and toughness.)

Here's an exhibit without so much weight. It's the Ridged Kusite display. All you need to know to become the master of all things Kusite is that it has appeared on only one other card - an instant from Weatherlight. Here's how it looked then, and how it looks now.

"So what card is that art from?"

Why did I spell it out that way? Well, because it may interest you to see those same letters played out this way:

Here's an interesting one. Serra's Boon. Like many cards with historical significance, the card name can be a key to the vault of knowledge. The same is true of the art and the mechanic. The trick with this card is that the word "Serra" has tremendous historical significance that cannot be summed up in a whole museum wing of its own. In a really, really small nutshell, Serra is a benevolent planeswalker who created an entire plane inhabited by angels. When we combine that with "Boon" and the card's mechanic, we get a nifty little twist on the card Phyrexian Boon.

Note that this is not a Timeshifted card. Serra's Boon is not an alternate reality version of Phyrexian Boon. This is because the mechanic is not identical. No matter, the nostalgic reference is still pretty darn cool.

Look at the Stingscourger's ability: "Return target creature to it's owner's hand." Nothing specific there. Plenty of cards in Magic history do that. But in combination with the art, we get this: 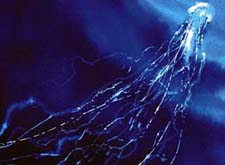 I have always loved the art from Ovinomancer. I was a strong proponent for its appearance in the Timeshifted set. I am extra glad to see that it's tomsheepery has seeped into Planar Chaos as well. Let's look at the Ovinize display.

Ovinize bridges the gap between extremely different cards. On one hand, it's a timeshifted version of Humble, a white Urza's Saga instant. On the other, it's a nod to our pal the Ovinomancer. But it goes one step further. Take a peek at the Ovinize flavor text.

"You wish for me to cow your enemies? I can do better than that . . . ." -Teferi, second-level student

Ha! That's funny. But it's also a connection to more old cards. Teferi, as a student, is also quoted on Stern Proctor and Telepathy.

Stern Proctor
I preferred the harsh tutors-they made mischief all the more fun." -Teferi, third-level student

Telepathy
The most disappointing thing about learning telepathy is finding out how boring people really are." -Teferi, fourth-level student

Do you have a second? That's all it will take for you to appreciate the Molten Firebird display. Have a gander at its art up next to the Alliances card it references, Ivory Gargoyle:

The compositions are similar, but only in the way they handle the figure and a circular background element. It's a subtle, but well-played reference. This is the sort of historical reference that you'll have to be on your toes to notice.

The Ana Battlemage display fits very well into the Time Spiral Museum, because its flavor is an extension of the Magic set, Apocalypse. It's dripping with history, and that history is from another time when things were all blown up. The first place to look for historical connections is the card name. "Ana" kicks off the card names of three different green/black/blue cards in Apocalypse, Ana Sanctuary, Ana Disciple, and Anavolver. The real juice, though, is in the art. If you look at the art for Ana Battlemage, you'll see that it's sporting a strange suit of armor - one that might have been scavenged from the husks of old trees or Phyrexian remains. But no, it's not piecemeal protection from post-apocalyptic toxicity, it's a specially tailored suit done Anavolver-style!

Here's a tip of an iceberg, Primal Plasma. This little display will show you in a quick glimpse how the name, mechanic, and concept of Primal Plasma are linked to Primal Clay. They sound alike, they're each a creature formed by some magical material, and they're functionally the same. Easy stuff. It's in the color of the card that we dip below the surface of the water to discover an iceberg of planar proportions.

As a timeshifted card, Primal Plasma carries with it the information on its own card face as well as information from its original card set. This means that a Timeshifted version of an Antiquities card, like Primal Clay, carries all the flavor and baggage of that card set as well. So how does this card being from Antiquities have anything to do with the fact that it's been color-shifted from colorless artifact to blue? Let's take a look at the flavor text (one of my Planar Chaos favorites, by the way.)

Tocasia brushed the gears and cogs from the table. There, before two wide-eyed brothers, she began a lesson on raw elemental Magic.

Whoa! That's huuuuuge. For those of you who are not familiar with the name Tocasia, here's a quick primer. Tocasia was the teacher of Urza and Mishra. For those who don't know those names; Urza and Mishra are the two megalomaniacal artificers who ended up blowing up the world.

"Cool! So this means that, in one alternate timeline, Tocasia turns from artifice to elemental Magic…"

"And that leads to the creation of elemental creatures like Primal Plasma!"

Yes. "And that means they blow up the world with a huge elemental bomb!"

Well, maybe. It's quite possible that a Mishra interested in the elements may not have taken such a liking to the twisted machinery of Phyrexia - but that's a whole other iceberg.

Yup, that's right, the Utopia Tree has perished under the harsh conditions in post-apocalyptic Dominaria. You can see its lifeless, leafless limbs behind the druid in the foreground. But all hope is not lost. There, in the hands of the druid, a wondrous gift clinging to life. Druids like this one have taken the Vow to protect the last of the Utopia fruits, and to replant them in more fertile grounds. See people, it's not all doom and gloom in Dominaria. Things just might be taking a turn for the better.