All Your Lightning Bolts Are Belong to Us

ver the course of the current Standard "season" I have covered as wide a variety of different—but successful and viable—decks and strategies as I could in this column. This really is one of the most vibrant and diverse Standard formats ... well ... um ... ever. I think that idea is borne out in the many variations and configurations of good cards that we have seen (and continue to see) in Top 8s from Pro Tour Qualifiers to Open events to real life Premier Events.

Is There a Best Deck?

Honestly, it might still be Jund. Despite the many different flavors of Jace, the Mind Sculptor decks, ranging from Grixis to Bant colors, to four colors, Jund has continued to rack up Pro Tour Qualifier wins essentially every week. Undeterred by Vengevines and Extractor Demons, Jund's Blightnings have continued to perform—and devastate—despite the shifting format's new brand of punishing disincentives.

If it isn't Jund, the most successful deck might be Mythic Conscription. What a great success story that deck has been over this run! Mythic went from a very good Pro Tour deck, care of Zvi Mowshowitz, to a week one winner in the hands of Lauren Lee (one of Zvi's real-life play test partners). But when the already-good Mythic joined with the Sovereigns of Lost Alara and Eldrazi Conscription, we witnessed the Voltron-ing of a good stack into one of the truly sublime deck concepts in Standard. The ability to tap for a one-time throwaway six drop and transform any creature—often a usually inoffensive Lotus Cobra or even Birds of Paradise—into a huge, annihilating, trampling, player-killing machine has changed not just Mythic, but other decks as well.

Over the course of this format we've seen White-Blue decks take up the Eldrazi Conscription banner.

We've seen at least two different four-color decks graft Eldrazi Conscription onto Naya beat-down or even more controlling planeswalker-based decks. The ability to go from zero to "kill you" is good enough to consider incorporating into many archetypes.

Or at least it was. 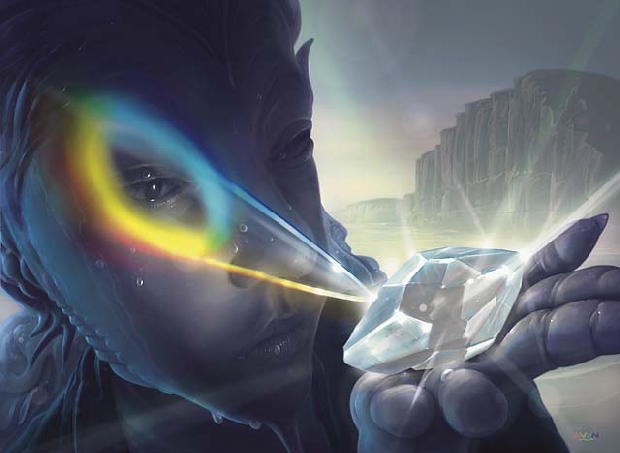 The people say that necessity is the mother of invention, and the resourcefulness of the villianous Jund players has shown us that the old adage continues to be true in modern Magic. Once upon a time it was too scary to play even Borderland Ranger (what if all of my Forests, Savage Lands, and Raging Ravines are all covered by Spreading Seas?). Prophetic Prism has in large part unlocked the Spreading Seas stranglehold. Jund might not be able to operate optimally under a Seas barrage, but the two Seas draw is no longer a death knell. Subtly, Jund can play Prophetic Prism no matter how many Spreading Seas are currently plaguing their mana bases.

We have seen Jace in service to giant Eldrazi creatures, and Jace teaming up with Zendikar Block buddies Oracle of Mul Daya and Lotus Cobra to produce dozens of 0/1 Plant tokens.

We have seen the rise of White-Blue control as an early leader through Jund, and the ongoing evolution of those colors from permission to tap-out to adding different colors and layers as disparate as Ajani Vengeant and Abyssal Persecutor. We've seen the deck go big, and we've seen the deck rediscover Emeria Angels ...

But what we haven't focused on much is the simple strategies that this most diverse of formats also allows for.

Because while it might seem, sometimes, that whoever draws more copies of Jace, the Mind Sculptor in a control mirror wins—it just isn't true. In fact, the best performing decks in recent weeks have not been based on lots of colors and mythic rare planeswalkers at all! The recent king—all due respect to Jund and Mythic Conscription—has been the Red Deck.

This Red Deck is Joey Mispagel's winner from the recent StarCityGames.com Standard Open in St. Louis. The combination of fast and disposable haste creatures, efficient burn, and backyard shenanigans is just one of the many successful Red Decks to take down titles in recent weeks.

Mori's Red Deck is reminiscent of Mispagel's, but tuned—at least according to Katsuhiro—to beat any kind of deck.

The main decks are pretty close, with Mori cutting most of the Staggershocks for a 25th land, main deck Quenchable Fire, and an extra Earthquake. Earthquake is a deceptively effective burn spell against Bant opponents. It mops up all their little Noble Hierarchs and Lotus Cobras while staving off next turn's attackers.

What about Quenchable Fire? What's so fantastic about that four-drop, that Mori would consider playing all four copies?

But what Quenchable Fire mostly is, is a big 6 point packet of damage; you know, like a Ball Lightning.

Six damage is a lot for a deck that only really does one thing—take the opponent from 20 to 0 as efficiently as possible. It is like two Lightning Bolts; it does the same damage as all three of Mori's Burst Lightnings!

Mori's sideboard in particular is full of goodies that we don't necessarily associate with Red Decks. Dragon's Claw is a nice card that was played in Joey's StarCityGames.com Open winner as well as the Japan National Champion deck, but what about Basilisk Collar and Cunning Sparkmage? Mori borrowed Tom Ross's Naya combination—some of the best cards in the format for dealing with removal-poor threat decks like Polymorph or Dredgevine, and put them into a deck that is usually considered much less tricky and elegant than some of the format's more colorful options.

It is important to note that these successful Red Decks don't have something that we have come to associate with the deck style: Goblin Bushwhacker and Devastating Summons. It is by removing that (sometimes) explosive combination that the Red Decks have rediscovered Standard success, and their place near—or even at—the top of the format's, err ... Mountain.

Speaking of Tom Ross, the Boss Naya deck designer recently won himself a Pro Tour Qualifier on the back of Lightning Bolt himself. One Lightning Bolt that is!

This is literally just Tom's Boss Naya deck reinvented for Standard ... but in a different way than the Gerry Thomspon-led Vengevine squad. You'll notice that there aren't any Vengevines!

The deck in particular started off as some "extra" Magic Online cards. Tom played them together and did well enough without four Vengevines. He made a Top 8 and just missed a Top 8. Even after finding some Vengevines, he decided he liked the old ways—and the flexibility of Ranger of Eos, in particular—better. And it was without Vengevines that Ross took down his PTQ, with his signature deck.

One thing you might notice is how many singletons are in this list. One Lightning Bolt, one Path to Exile ... maybe more notably one copy each of Ajani Vengeant, Elspeth, Knight-Errant, and Gideon Jura. Ross had an interesting and non-intuitive (if you consider how the rest of the format is treating these cards) outlook. With only one copy of each of his color's planeswalkers, Tom could not accidentally draw multiple copies, clogging up his hand with relatively slow threats!

The great thing about the success of the new / old no-Devastating Red Decks, and of the Boss Naya throwback—a Pro Tour Qualifier where Ross lost every single flip and die roll, incidentally—is how players can be competitive with even more different decks and colors. Some of the strategies aren't even directly related to adding Jace, the Mind Sculptor to Jund or Naya! The Lightning Bolt school is as effective as any of the options with fancier mana bases, and in the case of the Red Deck in particular, might just be that mythical best deck.