oth the StarCityGames Standard Open in Buffalo, NY, and the TCGPlayer Open $5K in Providence were won by Delver of Secrets decks. 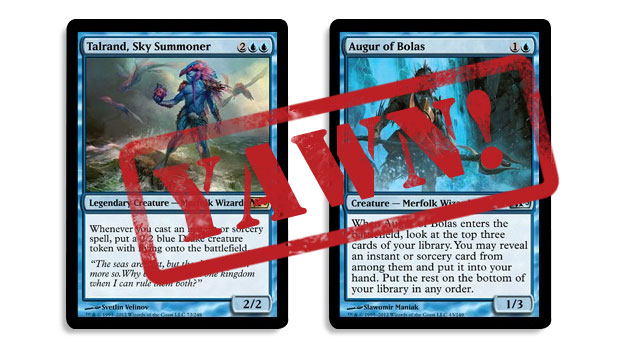 Instead, this week we are going to focus on a couple of new decks and synergies that almost got there. If you are down for a good synergy—or what looks like a super happy fun time—I suggest sleeving up one of these.

4 Liliana of the Veil 2 Sorin, Lord of Innistrad

4 Liliana of the Veil 3 Sorin, Lord of Innistrad
75 Cards

Joseph Snyder earned Top 8 in the TCGPlayer event with a new take on some fairly well-established and very good cards... but he added them together and spun them into a new deck taking advantage of some different cross-synergies.

Snyder's deck has a strong hand destruction theme. He can start on turn one with a Duress, then make you discard again with his Ravenous Rats. You are annoyed and you kill it; or maybe he gets a trade against your one-drop to boot. Did you play another creature? Bam! Smallpox!

Perhaps he re-plays his third land and goes for the lockdown with Liliana of the Veil.

Snyder's deck doesn't play a lot of cards we haven't seen before. The most "out there" one in his main is probably Smallpox. But anyone who remembers the last time Smallpox was legal in Standard—and the shenanigans that it gave rise to in that era's Solar Flare shell—know that Smallpox in Standard is more of a rediscovery than a newly blazed trail.

Gravecrawler is a fine one for either of two different pipers Smallpox has to pay. Do you want to protect your Ravenous Rats? Have another Zombie on the battlefield? You can sacrifice a Gravecrawler in play and just get it back as soon as you have a spare Swamp.

Not only does Geralf's Messenger significantly blunt the bite of Smallpox there, but you still have a 4/3 in play after all that pugilism.

Lingering Souls is a fine card to discard to Smallpox, too... or, for that matter, Liliana of the Veil. Cards like Smallpox and Liliana of the Veil—that force both players to undertake some distasteful activity in equal measure—are a pain and a drain on both players. In theory, they are "even." With Smallpox, you can get a little ahead by playing it on the play (which just might put your opponent back to no lands); and if your opponent went second and ran a one-drop, you are doing an emotional lap around the room!

But still, while you both have to discard cards, you actually had to spend one, as well.

Liliana of the Veil, while leveling up, requires both players to discard a card. In either of these situations you can break the symmetry by discarding some kind of a renewable resource (like Lingering Souls, which has an easy flashback, or the buyback-body Gravecrawler).

There are tons and tons of subtle synergies in Snyder's deck... Like what if the opponent has an awesome guy and a crappy one? And you make your opponent sacrifice a creature with one of your "Edict" effects from Smallpox or Liliana of the Veil. Your opponent chuckles a bit and sacrifices the crappy creature.

Unless the awesome guy is really awesome... not a huge chance it can withstand a morbid Tragic Slip.

Far be it for me to undersell the presence of token creatures and token generators. Lingering Souls is not just a flashback spell that can help you recoup the up-tick process on Liliana of the Veil. It is also a token-maker! So when you have to sacrifice a creature to Smallpox? While the opponent is picking which mythic rare is going to go to the bin? You can send a 1/1 wooden nickel to the graveyard. Lingering Souls; Sorin, Lord of Innistrad; and Timely Reinforcements out of the sideboard all excel at producing a small creature you would not mind sacrificing to a symmetry. And Timely Reinforcements? You can even set yourself up with a little life loss to help ensure maximum Reinforcement!

So... a little Pox, a little White-Black Tokens, even a little Zombies.

We're just getting warmed up.

Check out the deck that almost won the SCG Open in Buffalo:

3 Soul of the Harvest

Kurt Crane's GW Elves deck is simply a joy to look at, isn't it?

(It's getting to talk about decks like these that really put the joy into this gig, by the way.)

Kurt's deck is like any old Elves deck. It has a bunch of acceleration (twelve one-drop accelerators among Birds of Paradise, Arbor Elf, and Llanowar Elves) and can hit a lord on turn two to get its beat on. In addition, it has Green Sun's Zenith for a bit of additional consistency.

Kurt plays value creatures like Elvish Visionary and Restoration Angel (how about flickering that Elvish Visionary?)... cards and cards and consistency and synergy. Out of his sideboard he can bring in not one, not two, not three, but four full copies of Thalia, Guardian of Thraben to slow down control decks and really put the hurt on Delver of Secrets. Oh, you kept a one-land hand with your Ponders and Gitaxian Probes and Thought Scours? You might very well get out of this, but I am going to make it expensive for you.

With Wolfir Silverheart—by its lonesome, or as a target or beneficiary of one of his X-spells—Kurt can pair an elite combat creature with one of his smaller Elf threats, and present an attacker that doesn't roll over to Bonfire of the Damned (for all its virtues, Kurt's deck is still small creatures).

None of that, of course, is the single reason we are talking about this deck.

Crane's deck, in addition to being an Elves creature deck, is probably the fastest offensive combo deck in Standard at present. It has all kinds of lines, but its true explosiveness centers around Elvish Archdruid and Genesis Wave.

Let's for the sake of madcap exaggeration imagine this:

You need far less luck with a fourth- or fifth-turn kill.

Green Sun's Zenith can get you your Elvish Archdruid. Getting to sufficient mana explosiveness for Genesis Wave is basically what this deck does. You pay a huge X. Maybe you draw some cards-cards with Elvish Visionary. If you stick Soul of the Harvest—wow! Draw all the cards you want now!

Putting a ton of permanents into play with Genesis Waveand drawing cards thanks to Soul of the Harvest and Elvish Visionary is what can dig you to your next Genesis Wave. Village Bell-Ringers and Restoration Angels keep your Archdruid fresh to tap and tap again. All of a sudden you have the better part of your deck in play, with tons of mana and tons of buffing.

You don't even need a huge number of attackers with the right buff. Craterhoof Behemoth needs a Genesis Wave of a certain size, but if you can hit X=8 you are almost certain to enjoy the fruits of many a body, which will result in big pumps. If you have even just one or two additional attackers that can swing in this turn, you might easily be able to put the opponent to -30 or thereabouts in a single swing.

Craterhoof Behemoth is flashy... but also a bit expensive, even for an X-deck.

Ezuri, Renegade Leader needs something different from Craterhoof Behemoth, but gives you something in return. You can just play the much cheaper Ezuri to defend your creatures from removal spells—even mass removal spells like Bonfire of the Damned or Day of Judgment—(as long as you have the mana).

Given sufficiently critical mass, Ezuri is no less lethal than Craterhoof Behemoth when you have enough mana.

You know how Overrun is often game-over? What about if you can cast the Overrun not just because you got lucky and topdecked it? If you have Ezuri on the battlefield, every five mana you make is like an over—and over—and over again 'run. Every five mana will make all your potential attackers +3/+3.

Now, assuming you have some potential Elves to attack with (and that you got here with one or more big and profitable Genesis Waves), you might have plenty of Archdruid mana and tons of fodder to help it along.

Big Craterhoof Behemoth? Rich Archdruid feeding the "other" three-drop Elf lord? You know what is also a cool way to turn lots of mana and creatures in play into a win? Mortarpod! If you have twenty guys out and access to forty mana (not hard with twenty guys out, one of which is an active Elvish Archdruid, maybe with a little help from a Bell-Ringers) you can just Mortarpod the opponent out. Your Genesis Wave even finds it for you!

Crane finished second with this deck at the Buffalo Open, but when I look at this deck I see much of the same wealth of possibilities that made Wolf Run Ramp a breakout when Brian Sondag won his Open those many months ago. Crane's deck does so many things, and is such a fresh combination of consistency (twelve one-drops, Green Sun's Zenith), power, and flexibility that I am sure we are going to see it—or decks descended from it—in the remaining months leading up to Return to Ravnica.

Let's finish on a deck that didn't break open the Open Series... yet... but plays a brand new card from Magic 2013 that has all kinds of Johnnies talking:

"It's just a Planeswalker you can't attack."
—Brad Nelson

Brad's deck is tuned to fight a metagame largely defined by playing lots of guys. He has not just Day of Judgment but also Whipflare to fight small creatures, and has resurrected cards like Tumble Magnet to both set up Gideon Jura's Royal Assassin-like ability... and protect Gideon from large attackers. Of course, Tumble Magnet forces opponents to commit extra creatures to the battlefield... which then sets them up for his copious Day of Judgment/Whipflare package.

Like many decks we have seen in recent weeks, Brad played a Phyrexia's Core package with many Ichor Wellsprings and Mycosynth Wellsprings. Phyrexia's Core has synergy with lots of artifacts, from Solemn Simulacrum to Spine of Ish Sah, and he can recoup any of them with Trading Post, going long.

Nihil Spellbomb is a cantrip that holds Brad's multicolored deck together, and a key point of defense against popular threats like Rancor and Strangleroot Geist.

And of course, it is a card-drawing cantrip of an artifact, which can help you to find your Trading Post and the lands to get this engine purring.

So... whether they made Top 8, a heartbreaking finals, or not the elimination rounds yet, Magic 2013 has already helped to produce several new archetypes with contributors like Duress and Arbor Elf... all the way to haymaker flagships like Trading Post. What new strategy are you going to try this weekend?