f you've ever been in job where you sell things, even for just a day, you're probably familiar with a scene from the movie Glengarry Glen Ross where Alec Baldwin's character delivers a powerful, vulgar speech about sales. The mantra "Always be closing" took on a life of its own, as it's a compelling idea: If every step you make is toward completing the sale then you should be completing more sales than if you weren't. 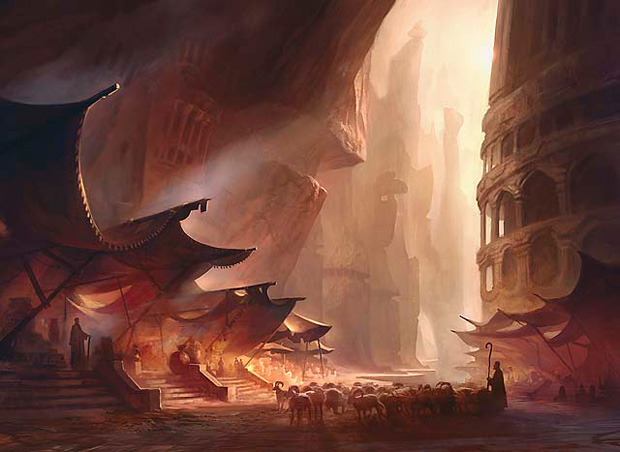 Of course, there are problems with forcing every interaction to move down the sales path. Success comes in many forms, not all of which are winning. But what is success without victory—closing the sale?

Last week, when I asked you about your most successful Commander deck, I left the definition of success open to interpretation. The most common way to handle "success" is to look for wins, and the powerful decks you shared are archetypes to find wins. This was from Matthew:

Here's my current best commander. She's Karametra, Gods of Harvests! As soon as I saw her previewed I knew I had to do a landfall Commander with her. I did my research, built my list, waited for Born of the Gods to release, waited another week to find some with a Karametra, and then built the list. It's pretty insane—plays like Genesis Wave for twenty, Boundless Realms with Lotus Cobra out, any landfall card with creatures in hand and Karametra, and having no more lands in my deck. She's pretty powerful as a commander, and I haven't lost a game in two weeks with her!

Winning in Commander feels good, since winning at Magic feels good. It's what hooks us on any game: finding the path to winning. If there were no winners, Magic wouldn't quite feel the same, right? In a format like Commander it's almost trivial to include combos that can instantly take over a game, or even win it outright, as Sakae shared:

My most successful deck is my Karador, Ghost Chieftain deck, due to a combination of powerful control/removal and recursion. With this deck, nothing is safe. Indestructible? Exile with Ashen Rider, Merciless Eviction, or Luminate Primordial, or drop toughness to 0 with Vish Kal, Blood Arbiter, Blood Arbiter. Hexproof? Mass removal with Kirtar's Wrath, Novablast Wurm, or Merciless Eviction. Indestructible + hexproof? Cruel Edict you with Sheoldred, Whispering One; Butcher of Malakir; Fleshbag Marauder; or (again) Merciless Eviction. Card in your graveyard? Take it with Sepulchral Primordial or Debtors' Knell. Hand? Mind Slash to see and maybe make you discard it. Library? See and maybe exile it with Thoughtpicker Witch. My opponents can't win if they have no cards to win with.

Meanwhile, my own cards become impossible to stop. If you destroy my cards, I'll just retrieve them with Sheoldred, Reya Dawnbringer, Karmic Guide, Sun Titan, Eternal Witness, Adarkar Valkyrie, Debtors' Knell, Deadbridge Chant, Paleoloth, or Karador. If you try to exile or bounce one of my cards, I'll sacrifice it to Attrition, Vish Kal, Blood Arbiter, Thoughtpicker Witch, Perilous Forays, Grim Backwoods, Ashnod's Altar, or Phyrexian Tower, and then reanimate it. If you do end up exiling something, I'll rescue it with Riftsweeper or Pull from Eternity. Plus, I have Spearbreaker Behemoth, Archetype of Endurance, and Glory for extra protection.

As a last resort, I have three ways to suddenly win the game: if Lord of Extinction; Svogthos, the Restless Tomb; or Nighthowler is big enough, I can sacrifice it to Jarad, Golgari Lich Lord to kill everybody. Reveillark + Karmic Guide + Ashnod's Altar = infinite colorless mana that can be used with Nim Deathmantle to infinitely reanimate something, or simply just exile everybody's libraries with Thoughtpicker Witch. Finally, with only six other nonpermanents, Primal Surge will usually dump enough of my library onto the battlefield to completely dominate the game.

Sakae's deck is the Magic equivalent of "Always be closing." It's packed with ways to disrupt opponents, redundant effects, and a few instant-kills to ensure even tenacious opponents can be sold on the win. But there's a price to be paid for power, as Raymond shared:

My answer: Momir Vig, Simic Visionary. I call it, "Behold My Creations!" or "I'm not saying it was Momir Vig, but it was Momir Vig." Being a diehard Simic player, Momir is my most successful Commander deck because I can tutor up any answer to deal with almost any situation. I also have a strict rule about Momir, which may explain some choices on the cards in the deck: If a blue and/or green creature can do what any other spell or permanent can do, the creature wins and is selected over the option, because of the synergy with Momir. It has a very repetitive play style, which can lead to unexciting games sometimes, in that it searches for the combos it needs to win the game: Treasure Mage into Planar Portal into Tooth and Nail entwined into Deadeye Navigator and Palinchron into infinite mana into Enter the Infinite into Laboratory Maniac and draw all the cards possible to win the game! There's also Biovisionary as an alternative win condition as well.

Within my Commander playgroup, Momir is usually the first one to be attacked because everyone knows if they just leave me alone I'll eventually combo out and win the game. I'm okay with this, though, since I understand it's supposed to be fun and if a deck is always winning every single game, it's not fun for anyone else. I enjoy playing it because I enjoy seeing how many different ways people attempt to stop the combos, or how I can still combo out to something when my plans go awry.

Raymond's deck is also built to be a closer, but it also became the target of his playgroup. To mix clichés, "With great power comes great responsibility" was something said to Spider-Man but it's just as applicable here. Commander is a format that asks for things that are in tension against each other: Powerful decks built around a recursive creature and decks that create a great experience for other players.

That's another definition of success some of you chose: creating that lets-play-again feeling among friends. Rahil shared more:

This deck isn't quite designed to defeat opponents. Nor is it as broken as possible. It doesn't contain any of my best cards, either. In fact, this deck is virtually a bunch of green and blue one-of cards I had laying around, stacked together and garnished with basic lands.

In spite of all this, it is my most successful Commander deck. It could be the opponents underestimating me for silly plays, like amassing Fertilid copies off Progenitor Mimic to bring out all of my basic lands (for no other reason than "because I can"). I don't know. My best guess is the element of surprise that comes from a deck like this. And believe me, I'm as shocked as anyone else at the table when I win the game with a colossal Cloudfin Raptor or an arbitrarily large Ooze token, or even a Drake armada accompanied by a sea of +1/+1 counters. Winning is awesome. Winning awesomely is awesomer. There is no set strategy and nearly every game plays out with newly discovered interactions—and that's what I love about it. It's truly serendipitous.

1 Bred for the Hunt 1 Leafdrake Roost

The deck does "suboptimal" things in "suboptimal" ways. It relies on the randomness of games and doesn't create similar game states each time. It isn't always closing in the traditional sense—doing the most powerful and disrupting things possible—but it still meanders the path toward victory. This type of success in Commander is one that looks at how the deck feels to play and be played against, a subjective measure, rather than an objective ability to find wins. Keegan explained further:

The one that has held the most success for me is the only one I actually own—my Derevi, Empyrial Tactician deck. Essentially, the deck takes advantage of Derevi's untap trigger and a bunch of creatures to either ramp or abuse activated abilities like that of Bloom Tender's. Early in the game, untap triggers get pointed at lands and mana rocks to accelerate my progress. If I don't just straight-up ramp and tutor to a Craterhoof Behemoth or Mirror Entity combo-kill, eventually my continual mana advantage and higher card quality/relevance (via search and deck manipulation) causes opponents to crumple.

The deck plays just a spritzing of dedicated disruption spells. I prefer to only use a few versatile disruption cards since I would rather just be making somebody deal with my threats. As an aside, I do specifically go out of my to not play the "threats" that are particularly cruel or unfun, like Winter Orb or Jin-Gitaxias, Core Augur, as they tend to make the table groan in frustration (although I do run a Cyclonic Rift as a catchall answer to on-board combos). The thing I love about this deck is that it always manages to have something strong and relevant to do, and with just a few cards in hand, one turn can last quite a long time. The combination of "fair [think fun] power," board relevance, consistency, and the ability to switch gears midgame makes my Derevi deck a success to me.