"Anybody who's anybody plays Wurmcoil Engine in Faeries," Josh says. "Some play it main deck."

"Yeah," responds Pat. "It's way better than it is in Standard. Funny ... Wurmcoil Engine might be the best Titan in Extended." 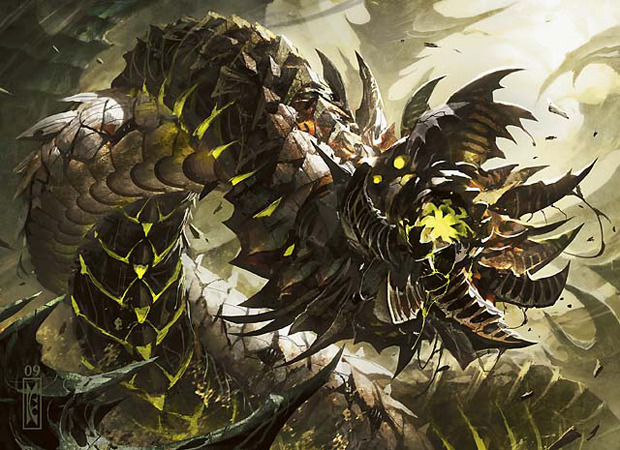 am two-thirds of the way through an 0-3 draft performance at Jonny Magic's. Patrick Chapin is in town (New York, that is, "the City") for New Year's celebrations ... and where else were we going to go? The pair of us were bumming around the corner of Finkel's apartment when the Man ("the Machine") himself, and his mom, happened by.

"Are you guys going to head on up, or what?"

The draft prior to ours features two U.S. Nationals Top 8 competitors ... from the same year (Josh Ravitz is one of them, Chris Manning the other). I am gearing up to play Jamie Parke. Meaning—counting Chapin—that the draft we are in features two American World Championships finalists.

Back to the action:

"The only question to ask," says Josh, "is whether your deck can beat Faeries. It's really Faeries or other."

"Does it?" The Innovator is quizzical. "I mean ... Five weeks from now, eight weeks from now ... who can even say what Four-Color Control looks like?"

That was twenty-four hours ago; and that is how this article started.

At the time, the first Magic Online Pro Tour Qualifier for this winter's Extended PTQ season was just revving up ... and surprise, surprise: Faeries was top dawg!

In this article we will go over not only the Top 8 deck looks at that top dawg, but a brief analysis of Pat's comment. What are some different looks at Four- (and Five-) Color Control? By its very nature, polychromatic control decks are about the most customizable decks in the format. They are—by their many, many colors—able to play essentially any cards, allowing them to obtain "good match-ups" in essentially any match-up ... but always at a cost. How have different players approached this puzzle so far?

Aside: Just minutes before working on the first draft of this article, I lost to TeamCKgetthere's Faerie deck.

Due to the pedigree of picking up the first PTQ win, we can probably assume that TeamCKgetthere's list will be the default PTQ Faeries deck ... or thereabouts. In any case, it should make for a fine gauntlet deck, being, as it is, The Deck to Beat.

How does a "modern" Extended Jund differ from the Standard deck that so plagued the world for months and months last year?

The defining feature of this style is the inclusion of Fauna Shaman; Fauna Shaman can find singleton bullets like Shriekmaw, or line up multiple copies of Demigod of Revenge. Demigod of Revenge is especially special in a format where countermagic-based defenses such as those played by Faeries, Four-Color Control, and Wargate are so popular.

Mythic Conscription in Extended works much the same way that it did in Standard. Drawing on Zvi Mowshowitz's Mythic mana base—Birds of Paradise and Noble Hierarch with Lotus Cobra + Knight of the Reliquary—the deck forces down powerful threats ranging from Jace, the Mind Sculptor to Sovereigns of Lost Alara. When Sovereigns hits, you can attack with whatever creature is still untapped, search up Eldrazi Conscription, and smack for 11 or more.

With Mana Leak and six planeswalkers, Mythic Conscription can operate as an accelerated White-Blue deck, or fall back on creature-lands. The card quality, overall, is among the highest card-for-card in the business.

Celldweller's take on last summer's (arguably) most successful archetype features a fair number of improvements (or at least alterations) with the move to Extended's wider card pool:

My early game prediction? Mythic Conscription may prove the most successful attack deck of the season.

Bryang's deck has every ace from Bloodbraid Elf to Cryptic Command to Jace, the Mind Sculptor ... Four copies each of some of the format's hottest tools. Lightning Bolt? Preordain? Awesome over awesome.

Plus, Bryang does, basically, my favorite thing you can do in Extended: graft a two-card combo onto an existing functional deck: Pestermite + Splinter Twin.

In addition to the infinite damage potential of infinite Pestermites, the deck has good Faeries resistance with Great Sable Stag out of the side; as Faeries continues to perform (and we can probably expect that it will), look for this card in particular to jump up to a four-of.

Just out of the Top 8 there were a number of interesting decks, including Green-White Summoning Trap (based on Zvi Mowshowitz's Amsterdam design), straight Red Deck Wins, Elves, White-Black Tokens, and mono-creature Fauna Shaman.

But the most important deck you should probably look into that wasn't mentioned in the Top 8 is White-Blue Control with Sun Titans. Prior to the PTQ sugiki did well in multiple daily events, including a 4-0 finish the day after Christmas:

I got turned onto this deck by Joshua Ravitz (apparently before his—perhaps correct— tunnel vision in the Faeries direction), and it seems like a fine performer. The Sun Titans in particular are savage threats in the format. Sun Titan + Kitchen Finks can laugh off a Cruel Ultimatum. In this deck, again thanks to that sunniest of Titans, Jace Beleren is actually better than Jace, the Mind Sculptor! But everything—from the Wall of Omens to the Oblivion Rings to the singleton Vendilion Clique and Ratchet Bomb—have fine synergy with the Sun Titans, and as parts of the whole.

Part 2: Four-Color Anybody Who's Anybody

Now is the part of the article we talk about trending and possibilities in Four- and Five-Color Control decks.

It is hard to say what is "typical" in the archetype, but there are certain things that we can see across many different deck lists. For example:

From there Sunblast Angels or Day of Judgment and so forth represent some of the individual customizations that are the hallmark of this deck type.

This deck from about 12/27 shows a deck with nine Vivid lands, eleven "enters the battlefield tapped" lands overall with Creeping Tar Pit ... that is, fifteen coming down the right way. One Volcanic Fallout in the sideboard, and Runed Halo as a sideboard spoiler for Valakut, the Molten Pinnacle (and others).

Check how these numbers have moved somewhat:

The finisher featured here is Bogardan Hellkite. While it looks like a creature-sweeper, I choose to see this as a cool tool against other control decks, as it allows a blue deck to pick a fight with another Blue deck at the end of turn, rather than waiting for a mana disadvantage on one's own turn. And while a good man is not too good to trade a Vendilion Clique for a Boggart Ram-Gang, the same can't be said for the proactive 3/1 Faeries over typically defensive Wall of Omens.

But the structure of the deck itself is actually much more interesting than the creature details.

Why play a slower sequence of lands?

How else are you going to make sure you can cast Great Sable Stag?

Along with a 3 + 1 split on Volcanic Fallout (over 2 + 1), we see a Five-Color Control deck that is much more aware of other decks with Mana Leak and Cryptic Command, among those Faeries.

From the same tournament:

Again, the structural changes to the mana base (more Vivid lands) and slightly upped Volcanic Fallout counts, supporting Great Sable Stag out of the sideboard.

Again, a totally different creature suite than we might be used to.

Sunblast Angel might get you oohs and ahs (and angry looks from beatdown victims), but Mulldrifter—once a staple—is just cool.

The changes over this short time period seem slight—a Vivid land here, a different creature there—but you can see how players are already willing to bend the deck in order to be more competitive with Faeries. It will probably be as Patrick suggested: Who knows what Four-Color (or Five-Color) Control will look like a few weeks from now?