Half Standard; half Legacy Grand Prix.

This, dear readers, is the Arnold Palmer!

This Top 8 is clearly as insane as Caleb Durward's Madness deck.

How great is seeing Tom Martell ("Hi, Mrs. Martell!") deep in the elimination rounds of a Sunday stage? Is there any more fitting champion of almost any tournament than Tomoharu Saito? Saito's continued enthusiasm for Magic is simply humbling. Has there ever been a player so consistently near the top for so long as Saito who—more often than not—was also the best deck designer in the world? (Okay, okay, Gabriel Nassif.) Saito is a layup on the Hall of Fame ballots this year—both of them, actually.

What is this, The Week That Was?

4 Daze 4 Force of Will 3 Spell Pierce

It's pretty cool to see a Legacy Fish deck that plays, you know, actual Fish. The vocab of the Eternal formats is such that "Fish" can just as soon refer to a disruptive creature deck, featuring Jötun Grunts as it can a deck like the great Saito's, full of twenty different Merfolk.

So what about those Merfolk?

Saito played twenty creatures, but the cool thing is that fully twelve of them were some kind of Merfolk-boosting Merfolk Lords (Coralhelm Commander in addition to the more common Lord of Atlantis and one-time Standard standout Merrow Reejerey). These creatures obviously all built upon one another, combining tribal synergy with baseline card efficiency.

Æther Vial: The thing that really makes Saito's Merfolk deck exciting is this one-mana artifact. Of course Æther Vial is a busted Sol Ring-like artifact that turns all your creatures into uncounterable instants. The curve in the Merfolk deck is particularly attractive, with so many one- and two-mana creatures, and only one sort-of three, so Æther Vial will hang out at two most games.

Standstill: Standstill is a powerful card, but doubly so in combination with Æther Vial. Basically, you can play all your creatures via Æther Vial without triggering the Standstill. The pressure is on the opponent to break the Standstill, probably filling Saito's hand with some of the deck's cheap or free counterspells.

Speaking of Standstill, here is a different look:

4 Innocent Blood 2 Life from the Loam

Now we see some of the vaunted variety of the Legacy format. Ford's deck—also a Standstill deck—is quite different in implementation than Saito's.

Instead of aggro-control we have almost a true control deck, all counterspells and card drawing, heavy on the defense with tons of one-mana creature elimination and Pernicious Deeds. 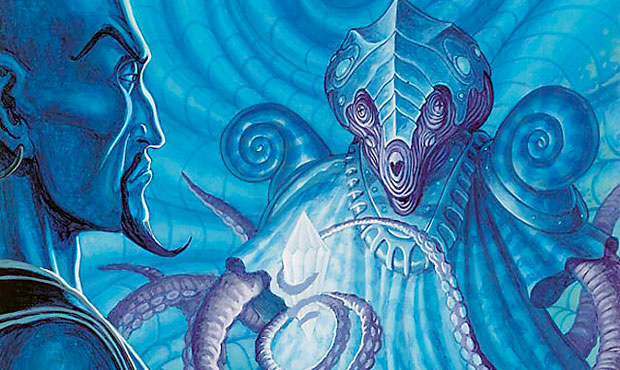 Ford's deck has something we haven't looked at in some months (or years?) ... a Cunning Wish engine. His sideboard is heavy on the instants, designed with specific singletons that can be gobbled up by Cunning Wish, depending on what is coming after him across the table. To wit:

Those physical copies of Jace, the Mind Sculptor have done nothing but crush tournaments for Tom Martell. I broke them in for him, qualifying at National Qualifiers in New York, but then Tom won a San Juan Last Chance Qualifier, and now they put him into the finals of a Grand Prix. If the trajectory holds true (National Qualifiers Top 8 to Pro Tour Qualifer win to Grand Prix finals ... ) we can probably expect Martell in the Top 8 of U.S. Nationals in a couple of weeks, followed by a Pro Tour win the week after. There's simply no arguing with it. This is math, people.

What about the rest of his deck? Martell's core combination is Sensei's Divining Top + Counterbalance. Basically you can counterspell anything if you have a card of the correct mana cost in your top three cards; sometimes you just get mad lucky and cast Counterbalance on turn two without mana open to use the Top (or sometimes even no Top at all) and it fires away and counters just lucky-ducky style.

His creatures included combo-breaker Vendilion Clique and optimal threat Tarmogoyf (no big surprises there, especially on the second one).

Tom's deck is unique in its many colors. He went four-color with red for Firespout and white for Swords to Plowshares. Tons of flexibility and—chuckle, chuckle—basic Mountain and Plains both! "Wasteland is too good." 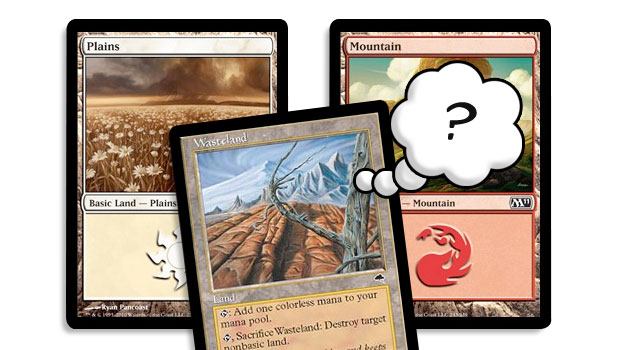 Brad Nelson's deck, care of Brian Kowal, reminds me a lot of Chris Pikula's triumphant Deadguy Ale comeback at Grand Prix–Philadelphia (another Legacy tournament) a few years back. He has the Gerrard's Verdicts next to the Hymn to Tourachs, and Dark Confidant as the black two drop. 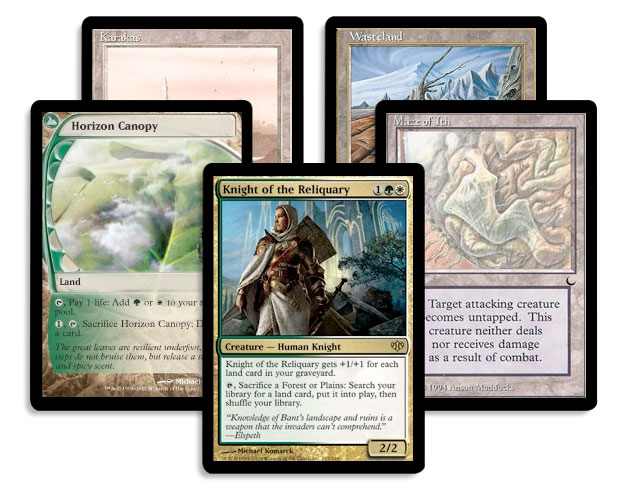 3 Leyline of the Void 1 Armageddon

4 Force of Will 1 Shared Fate

The Grand Prix coverage had a great video interview with Christopher Gosselin, which you can see below.

This deck is one of the most unique, inventive, and apparently effective home-brews I have seen in some years. Basically you only need to resolve one spell to win the game. That can be Show and Tell (for Emrakul, the Aeons Torn, of course), or Doomsday.

The deck is deadly fast (for example you can cast Dark Ritual + Doomsday), but is not in a hurry to win, necessarily.

Okay, how does Show and Tell work?

In the video, Gosselin explained that depending on the match-up, you might get different things. A typical scenario would be a five-card library of: 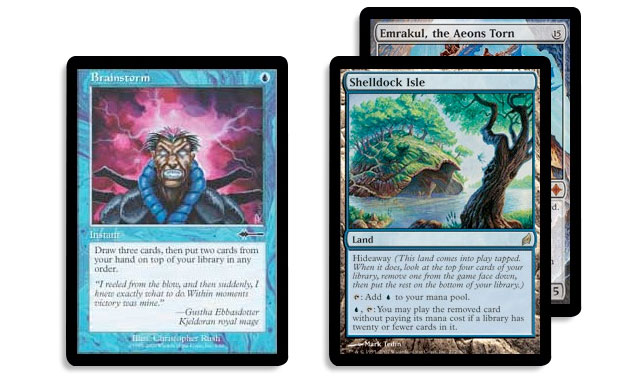 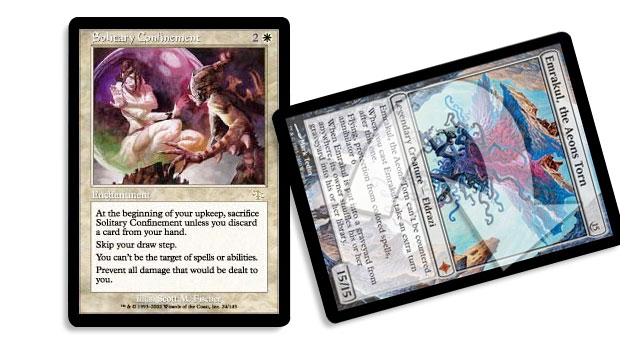 With your free turn—yes, you get one—you can pick up and cast Solitary Confinement. Neither you nor your principal permanent can be targeted, so you are probably in good shape given that Emrakul, the Aeons Torn doesn't need to attack very many times to win the game.

Age's deck also has several ways to get a free Emrakul, the Aeons Torn onto the battlefield: 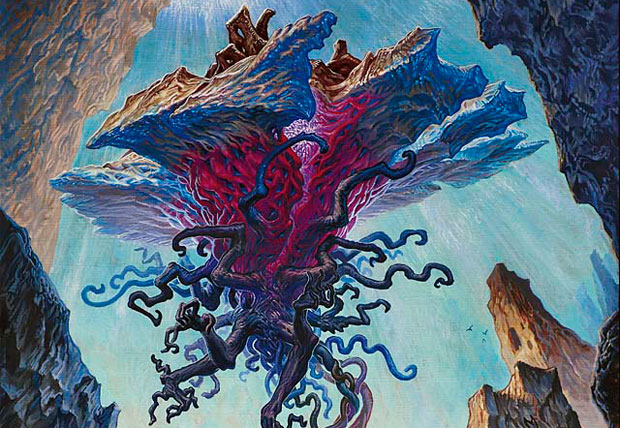 As good as a quick 15/15 annihilator is, Age's secondary threat may be more interesting to talk about. Woodfall Primus is a "mere" 6/6, but has a wonderful Desert Twister-like 187 attached. When you play a creature with Sneak Attack, you are supposed to sacrifice it at the end of turn.

What happens when you sacrifice a Woodfall Primus? Persist. 187 ... again.

It's kind of like a Plow Under that hits for 11.

The disappearance of Mystical Tutor did not deter Cook from playing one of Legacy's most popular combo decks (they became an Infernal Tutor and Silence in his list). 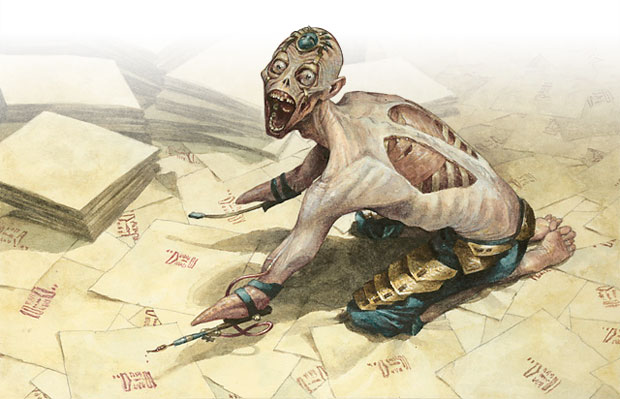 Ad Nauseam is the main card-drawing engine. With the exception of the two storm kill-cards, everything in this deck is super cheap—zeroes and ones for the most part—allowing Cook to draw, you know, lots.

Then it's all about Brainstorming and dropping Chrome Mox and Lotus Petal, looking at the top card of his deck, and so on ten times.

Finale: Either Tendrils of Agony or Empty the Warrens. Either one, given sufficient storm, can set up a kill within one turn.

Just as we saw a Cunning Wish sideboard in Ford's Standstill list, Cook played a Burning Wish engine. His sideboard was almost all sorceries that could either serve as the kill on the spot (Empty the Warrens, Tendrils of Agony, or even Grapeshot) or get him out of jail. For example, Shattering Spree could blow out Affinity or just take out a key artifact threat under pressure. Again, this kind of sideboard offers lots of options, but at the cost of consistent customization in Games 2 and 3.

Durward clearly had the most exciting deck in the Top 8. Stone Kold Blue-Green Madness that was so popular in Block and Standard, (and even competitive in Extended) grafted onto a Survival of the Fittest engine and the Standard world's hottest new threat? What could be more exciting? 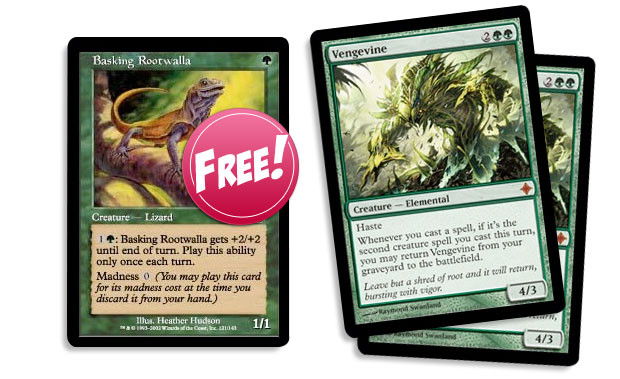 Hell's Bells, this deck is hot.

One of the cards that you will see in a variety of decks, but is probably best here, is Faerie Macabre. Faerie Macabre is a "free" out against graveyard effects from Golgari Grave-Troll to Vengevine itself. But in this deck, Survival of the Fittest can actually go and get the powerful card when the deck is under pressure.

Despite being the most exiting of the eight, fo sho, I would still point out some possible areas of improvement: It's almost a let-down to check in on "mere" Standard; but because of the ongoing importance of National Championships, let's get a bead on the format of record.

The most exciting aspect of this deck is main-deck Anathemancer.

Can you imagine flipping that mere 2/2 over with Bloodbraid Elf on the assault, turn four? Ka-pow! This is in the framework of an aggressive Jund listing ... Plated Geopedes over deep curve options like Siege-Gang Commander.

3 Ricochet Trap 4 Back to Nature

There were three distinct Red-Green Primeval Titan decks in the Italy Top 8, but only one of them played Gaea's Revenge!

With all the focus on Destructive Force in some Primeval Titan decks, it might be easy to forget the one-time Valakut, the Molten Pinnacle-Ramp staple—Lavaball Trap. This seems like quite a good way to combat another Titan Ramp deck without compromising one's own mana base. Lavaball Trap is effective against Cultivate, Harrow, what have you; and is also quite the answer against a beatdown deck playing a mere Arid Mesa.

Italy's champion took a different look at unifiying the disparate Bant camps of Vengevine and Mythic Conscription, this time with the hook-and-eye of Fauna Shaman.

Fauna Shaman can set up Vengevine, as we have seen in all kinds of Naya; separately it can get one of two Sovereigns of Lost Alara (redundancy accomplished with the Fauna Shamans) to set up the Eldrazi Conscription kill.

So there we have it. Lemonade, iced tea; Standard and Legacy. Hopefully you found the Legacy section especially refreshing (I can only assume the continued strength of Jund is keeping you up at night, like too much tea). Take care, good luck to anyone battling in the Red Zone this weekend, and see you right here next week!