Better than the Best ... Sometimes at Least! 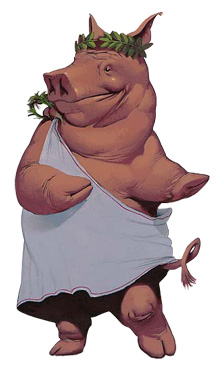 ne night last summer I was having dinner with Seth Burn, his frequent collaborator Hall of Famer Zvi Mowshowitz, Grand Prix Champion Steve Sadin, and some other friends for some barbecue and the NBA finals (if memory serves I had a bacon appetizer and a plate of brisket and pulled pork, while the Lakers gave up a 49-point halftime lead).

A topic that came up was an article that my good friend Patrick Chapin had recently written outlining the best creatures at each mana cost. Pat had proclaimed Goblin Welder as the best one-mana creature in the history of Magic: The Gathering.

So I told Zvi and Seth how inaccurate I thought this assessment was.

I mean obviously the best one-mana creature of all time was / is Disciple of the Vault!

Talk about a bad boy. Whatcha gonna do?

Disciple of the Vault is a walking death sentence. It undoes so much bad Magic. It is like a delayed blast Fireball, a time bomb, a harbinger for a bleak future.

And then there was Standard! And Extended!

Just last week we saw an Extended Grand Prix with multiple Affinity decks in the Top 8. Do you think they might have appreciated the extra firepower of the Disciple? 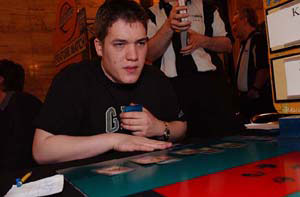 I mean by comparison, Goblin Welder has won what? It's huge in Vintage and had some nice outings in Seacaucus in the hands of future Hall of Famers, but it didn't dominate its own artifact-defined Block Constructed format and wasn't present in Kai Budde's Mono-Red artifact deck that he used to win the World Championships.

No, Seth and Zvi agreed. Goblin Welder is not the best one-mana creature of all time.

... But neither is Disciple of the Vault.

You want to talk dominating decks? Disciple of the Vault—as solid as it is—is a one-deck wonder, so will never be as pervasive, will never catch up.

You want to talk money? Sure, Disciple of the Vault has won more big-money tournaments than Goblin Welder ... but the real best one-mana creature of all time has won more money than both put together. 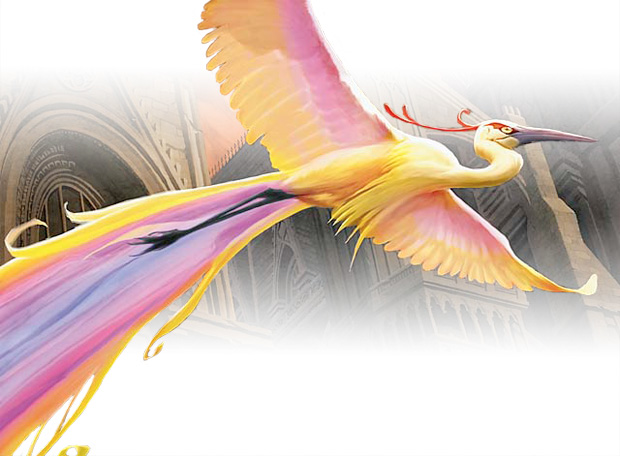 Of course it's Birds of Paradise! The little Birds is such a special creature. It was half of the reason Fires could bust out "the fix" (the dizzying offense of turn-two Fires of Yavimaya followed by Blastoderm, followed by Saproling Burst). The misplaced accelerator that made so little sense next to Pernicious Deed ... yet was so important to the early development of The Rock. The original "lightning rod" of Magic: The Gathering, drawing Lightning Bolts and Swords to Plowshares like no other creature since 1993 ... Well, no creature other than Hypnotic Specter.

Of course Birds of Paradise is the best one-mana creature of all time!

So about to be caught.

Birds of Paradise is an awfully awesome creature. Even though the little Birds is only 0/1, its ability to generate any color of mana has made it a favorite in numerous decks from the earliest days of Magic until today.

Though not generally considered a combat creature (check out the whopping zero power), Birds of Paradise has been known to carry a Sword of Fire and Ice with the best of 'em and, flying above the typical Red Zone, has never been too good to chump-block Keiga, the Tide Star, sacrificing itself for the greater good.

Not a bad package for the mere

Fix your eyes on the future: 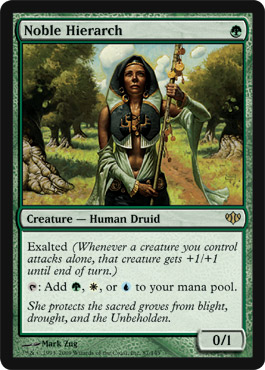 Here's the thing: Most decks—most creature decks that would play a "Birds of Paradise" at least—don't need to produce all five colors of mana. More than one? Sure. More than two? It happens a fair amount of the time. But all five colors is not necessarily a requirement of most of the decks that would consider playing Birds of Paradise. In fact, we are much more apt to see five-color decks based on Vivid Creek and Reflecting Pool with few if any small mana creatures than we are to see a Birds of Paradise–driven five-color deck.

Instead, the versatility of the colors that Birds of Paradise can produce has made it popular in a variety of two- and three-color decks rather than one deck that needs the Birds tapped for everything across the mana spectrum. To wit: The Rock only ran two colors traditionally. Fires of Yavimaya was a core two-color deck, and while it often splashed for a third color (white for Thornscape Battlemage and Armadillo Cloak, or black for Spiritmonger or Slay), Fires rarely splashed for both. And while today's flexible mana certainly gives deck designers different incentives, that is not to say that they have to take them all. As I just said: it's not a requirement.

So for a deck that only needs two or three colors (with those three colors being those of the Bant shard), I will argue that Noble Hierarch can make for a fine complement if not a clearly better option than the best historical one-mana creature ever printed.

It's simple: Provided you don't need your "Birds of Paradise" to produce Black or Red, a card like Noble Hierarch can just get in there.

If you play enough Magic you will undoubtedly encounter one or two of the hundreds of games where you have a first-turn accelerator but no three to play on turn two. Instead, you're "stuck" playing a two on turn two. But you have this stray accelerator (who might even hook you up with a four on three). Elves decks can get in with Llanowar Elves, but Birds of Paradise has traditionally been stuck at home, not particularly helpful, on account of its zero power.

So that's the selling point? 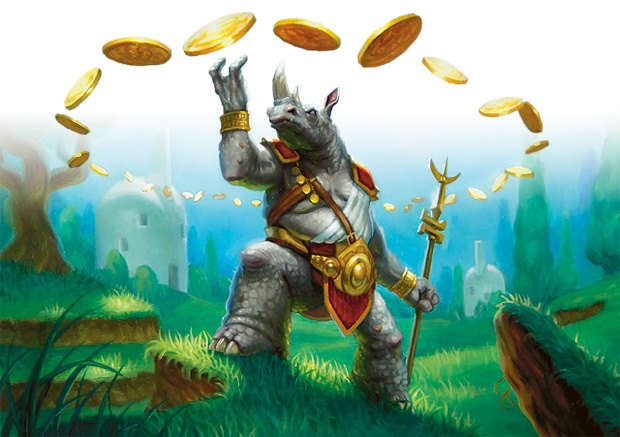 For sake of argument say you were going to accelerate from turn one into some impressive Bant three-drop on turn two .... Let's say it's Rhox War Monk because that creature has become pretty topical (plus, it makes for a great example). When you untap on turn three and crash with your Rhox War Monk, you usually get to mark down a 6-point life swing (3 going your way, and 3 off the opponent's life total) ... but with Noble Hierarch in play, Rhox War Monk is going to strike for 4, meaning 4 points of lifelink, too! Ka-pow! Eight-point life swing.

That is the power of exalted. Not only does Noble Hierarch give you a different kind of versatility than Birds of Paradise, the offense on the card is itself versatile. For instance, you can open on Forest, Noble Hierarch; then play Wooded Bastion and Sigiled Paladin ... All of a sudden it's like you landed a Jackal Pup instead of a Birds of Paradise.

We have obviously seen cards like this one in the past because I have spent a fair amount of this article comparing Noble Hierarch with the Birds of Paradise that has come before ... but on the other hand we have never seen a creature card quite like this one. It stacks with other exalted creatures and can therefore be played profitably in an exalted strategy. It is equal to and in some ways better than a Birds of Paradise, and can be substituted for a set (or complement a set) where the mana allows. Finally, Noble Hierarch actually encourages good play.

Many players—myself included—obsess over the strategic part of Magic: The Gathering, crossing our fingers that the synergies and strategies behind our decks will carry us past minor mistakes and lost tactical opportunities. But Noble Hierarch highlights those turns where we might otherwise do nothing, so that, over time, we are picking up those single points, here and there, as we accumulate more and more value over the course of many matches and even tournaments. Hall of Famer Mike Turian once told me how his decks with Woodland Druid—a humble 1/2 for

, not unlike an Exalted Noble Hierarch on offense—taught him to catch stray points and become a better Limited player, one of the best of all time. Hopefully, with this additional arrow in our collective quivers, tighter play will result for the rest of us.

Is Noble Hierarch flat-out better than the best one-mana creature of all time? Probably not. However the fact that we can have a serious conversation comparing the two, and make good cases for where the Hierarch might be more appropriate, does say a lot of positive things about this exciting new one-mana accelerator.

But the fun part is really when we start breaking the Rule of Four and double up Llanowar Elves and Birds of Paradise ... and can now add Noble Hierarch to the discussion; after all, it was the concert of Llanowar Elves and Birds of Paradise that helped Hall of Famer J. Gary Wise drop his second turn face-down bombs, cruising in the sky for four-points of lifelink on turn three! (Not to mention all of those second turn Fires of Yavimaya, third turn Blastoderms that could now miraculously do 20 instead of 15, and of course the Saproling Bursts and Shivan Wurms that followed). 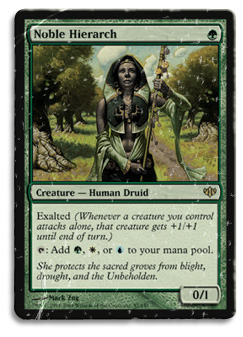 There will be many times where Noble Hierarch will be either better than a Llanowar Elves, or a good compliment to Llanowar Elves as sixth, seventh, or eighth one-drops with positive power. These decks are going to be the ones that don't need their accelerators to make too many colors, but care about having every hand on deck capable of, say, swinging a Umezawa's Jitte.

The Sword decks (that is, Sword of Fire and Ice and so on) never erred on the side of Elves over Birds because inherently positive power was not a prerequisite in those decks to all-out death from above. These decks—especially the ones splashing blue—will be much more likely to play Noble Hierarch in addition to some Birds over longtime second-stringer Llanowar Elves.

Ultimately, look for the new accelerator on the block to play every role, on a deck-by-deck basis, from auxiliary redundancy #5 to front-line four-of in Block, Standard, and even Extended for years to come.