Beyond River of Tears

wo pseudo-retractions from last week: 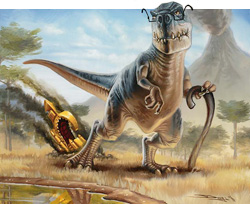 1) I am officially old. I know that the prospect of turning 34 (as I will later this month) would probably have steered most of my younger readers in the direction of that opinion already, but I am well and truly and objectively old—an "Old Yorker" as my daughter Bella would say—and here's proof: One stereotype of the doddering ancient dementor is that uncanny superpower to remember with vivid clarity what he had for breakfast on any given Tuesday 69 years earlier ... combined with the stark inability to recall, say, the name of the current president of these United States. Reader Stephen Patterson revealed my Magic history "old man" equivalent when he pointed out that while I claimed that the red-green finish at PT–Tokyo (four copies of one team's deck in the Top 8, led off by a proto-LSV Swiss string by Ryan Fuller) was "probably the single best showing for a deck ever" ... I could have looked no further than the PT that LSV actually won himself last year to espy a six-Elves Top 8. Old.

2) While I think that the Thopter Foundry + Sword of the Meek / Vampire Hexmage + Dark Depths hybrid combo deck is well and truly the single strongest archetype among the current Extended options, it is certainly not the only deck you can play. So the rest of this article is going to be devoted to all kinds of decks that have won PTQs over the past couple of weeks ... that include not one River of Tears!

This deck has three big things going for it:

1) It is almost as good a deck, on the fundamentals, as Zoo.

Red-Green Valakut, the Molten Pinnacle is not 100% as good, maybe, but it is pretty good in terms of an offensive creature deck. Kitchen Finks and Tarmogoyf + Umezawa's Jitte actually make it a favorable midrange vs. beatdown option against Zoo variants, The Rock, and so on. You can just get some Umezawa's Jitte counters and ride them like it's 2006. Or you can draw a Sakura-Tribe Elder into a Kitchen Finks and basically auto-win against a fair number of the aggressive decks in the format (sad but true).

2) You have Bloodbraid Elf and Punishing Fire + Grove of the Burnwillows.

I chatted briefly with Magic boss Aaron Forsythe over Bloodbraid Elf in Extended last week. Aaron was puzzled that cards about as strong as Bloodbraid Elf (viz. Ranger of Eos), or midrange creatures slightly more expensive (viz. Baneslayer Angel) see play and are even considered quite attractive ... but Bloodbraid Elf has not seen widespread adoption.

There are a couple of Bloodbraid Elf decks in today's article, and the generally underplayed wallflower of a 3/2 plays in quite a sprightly fashion in this deck. Sometimes you flip over Search for Tomorrow, but you will often flip over something quite devastating. Flipping over a Punishing Fire can be a third-turn backbreaker, for instance, with Bloodbraid Elf performing like an even more devastating Flametongue Kavu.

The Punishing Fire + Grove of the Burnwillows combination, the defining "Cursed Scroll" of Brian Kibler's Pro Tour–winning Rubin Zoo deck, has largely fallen out of favor, making way for Bant Charm in Extended. It is just a nice card advantage-generating sub-theme in this deck ... not strategic to the deck's plan, but a nice something extra that gives the deck an extra angle of attack for the "fair fight" wins, as well as a source of damage to fill out the last 2 points going for the Scapeshift combination.

One of the things I really love about this deck is how you can play it as a straight creature deck in Game 1, or how you can side out your combo for aggressive customization from the extra fifteen. Unlike the blue Scapeshift deck, this one will win as many games without resorting to 18 jumping straight out of the library ... but it is really nice to be able to kill the opponent on the fourth turn if you have to.

1) Forest, suspend Search for Tomorrow.
2) Mountain, Sakura-Tribe Elder; end of turn, sacrifice Sakura-Tribe Elder for Forest.
3) Warp in Forest; play Bloodbraid Elf, flipping over Search for Tomorrow, search up Swamp; play Treetop Village; attack for 3.
4) Play Grove of the Burnwillows, tap all your lands leaving three in pool; play Scapeshift sacrificing all of them ... 18+ to the opponent when Valakut, the Molten Pinnacle comes into play alongside a varied stack of Mountains. 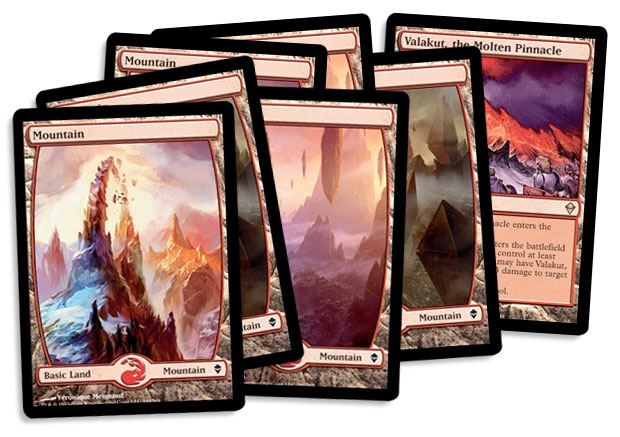 This deck is quite good against most Zoo decks.

It has some problems with Negate variants, but the combination of being able to play "fair" with Umezawa's Jitte and Kitchen Finks while keeping par with Tarmogoyf and potentially dominating with Punishing Fire allows the deck a very favorable day against opposing Wild Nacatls. 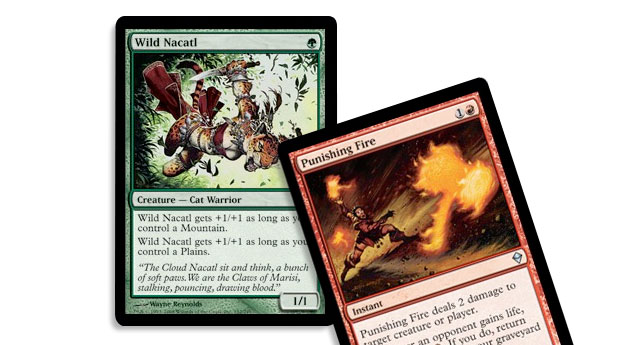 So for the fair number of players who put Zoo on even or better footing in Extended relative to Thepths, you have a nice chance. As a good combo deck as well as a pretty good beatdown deck, you can of course beat anything.

Reasons NOT to Play Red-Green Valakut

I would put this on the second best deck in Extended, which is not bad at all ... except for the fact that it doesn't have a great matchup against the best deck. The Dark Depths combination is definitely beatable; the Valakut, the Molten Pinnacle deck can itself deal more than 20 in four turns, and the ability to flip over a Dead in the face of an otherwise inviolate 20/20 is certainly heartening. However, Game 1 especially is challenging, and the fact that the opponent can sit back and hide behind the Thopter Foundry combination—while gaining bunches of life—makes for a difficult boogeyman indeed.

We can't say that Kyle's win in Columbus was 100% a waste of a Blue Envelope for two reasons: 1) despite his awesome second-place performance at the Pro Tour, he still gets to mise / mize / shotgun / topdeck free airfare to the next one, and 2) we get to highlight this truly innovative and powerful Bloodbraid Elf deck.

This is one of two defining fatty boom-booms (no relation) that set this Zoo variant apart from most others. Yes, flipping this card over with Bloodbraid Elf is exciting, but you know what is strategic? Boom in concert with Arid Mesa, Marsh Flats, Misty Rainforest, or Verdant Catacombs. You can point Boom at one of your own fetch lands, make it go away in response, and lose nothing ... Basically turn Boom into Sinkhole.

Because this deck plays main-deck Blood Moon, Boggemes wanted to avoid Path to Exile main deck. There is little point in mana-screwing opponents with the Mind Twist-like Blood Moon if you are just going to help un-mana-screw them with your removal spell.

Subtly, this is one of the key cards that can quietly push Zoo over the top against either the Thopter Foundry + Sword of the Meek or the Vampire Hexmage + Dark Depths side of the blue-black combo deck.

A couple of different players did well with this sort of a Zoo variant—that is, Woolly Thoctars and Negates prancing through the clover together like teenagers in love, in a melting pot—but I thought it would be particularly clever to highlight Lucas as a PTQ winner with Zoo ... You know, given how he was basically the first person to play Thopter Foundry + Sword of the Meek and Vampire Hexmage + Dark Depths together (at least as far as I know).

Here is a clip from him at Pro Tour–Austin:

This kind of deck pulls back from the Rubin Zoo / Saito Zoo variants, cutting the somewhat defining Baneslayer Angel and allowing the deck to play 22 rather than 24+ lands. Woolly Thoctar steps (or in this case more like "thunders") up to the 5 power slot.

Elements from Saito Zoo that are present include Bant Charm and Negate, with the latter being upgraded to the main deck.

While the deck plays only 22 lands main, there are roughly one million lands in the sideboard, and they are all strategic, serving with potential pinpoint precision next to Knight of the Reliquary; Ghost Quarter is a murderer of Dark Depths, Bojuka Bog the bullet for Dredge.

Lucas's deck has a mild Ranger of Eos subtheme that can express itself with "free" Noble Hierarchs and Wild Nacatls, or via the singleton Burrenton Forge-Tender out of the side.

A similar deck that pushes Ranger of Eos more offensively (rather than with a toolbox outlook) is Dillin Mosior's Madison winner:

Notice how this deck pushes past Wild Nacatl and foregoes Noble Hierarch for the classic modern Zoo opening. It really just wants to go 2-3 power creature on the first turn, then two more on the second turn, for an attack for 6 or more on the third. This deck's Rangers have just one job: offense. 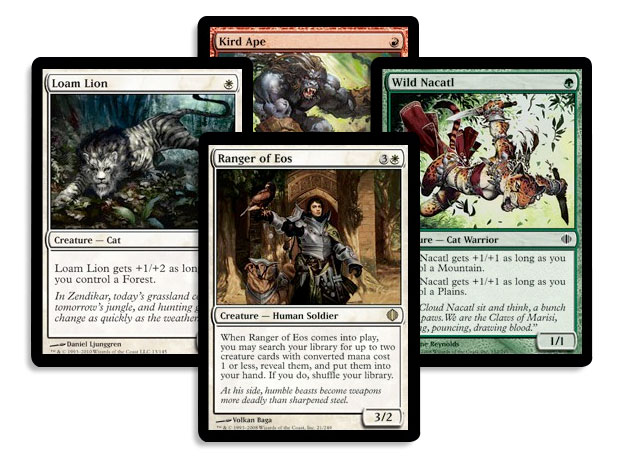 And lest we set up Extended as mono-Stomping Grounds, we'll settle for mono-Tarmogoyf:

This deck is an Extended update to the TarmoRack Standard decks from a few years back. The Rack itself has been upgraded to Nyxathid, a kind of The Rack that can attack and block.

Most of the rest of the deck taxes the opponent's resources. Smallpox on the play—especially when the opponent has cast a creature on the first turn—is unreal. Mana-screw, kill your guy, make you discard? Follow-ups from Augur of Skulls or Stupor will typically pull the opponent's hand to pieces, leaving the meat for Nyxathid or good old Tarmogoyf. Either card can shred an unarmed foe.

The card quality in this deck is deceptively high ... and deceptive. This is one of the few decks that can—perhaps by virtue of being "only" two colors—play four copies of Treetop Village. It also plays three Mutavaults!

Like many of the decks we've looked at, this one leans on Damping Matrix against a variety of spoilers, but probably most notably against the two "Thepths" combinations.

Surprise, surprise ... Damnation! Even more surprising than the fact that Wrath of God also comes in black is the notion that an aggressive creature deck might be a Damnation candidate. News flash to the unwitting opponent: Hi, I'm the control. Ting! 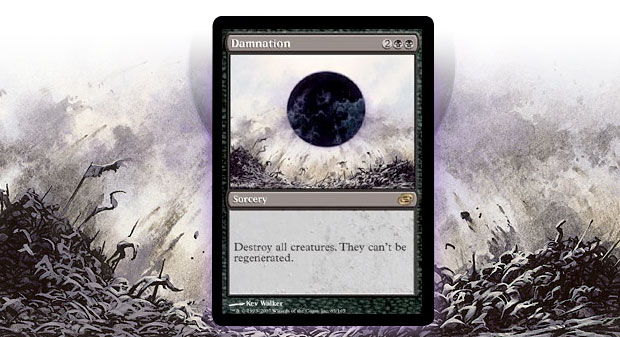 Especially if you are concerned with beating combo decks, Don's discard deck is something worth looking at. It is less dominating against other, often more offensively efficient, creature decks.

So there you have a fair variety of decks that are either far afield of everything we have looked at and seen so far this season, or are at least different "enough" to warrant discussions of their differentiations.

Good luck tomorrow (even if you elect to play Thepths or some similar filthy combo deck).