his past weekend marked the State Championships in the United States, and Provincials in Canada. States has been one of my favorite tournaments of the year for about the past five or six years; though it lacks the Blue Envelopes of a Pro Tour Qualifier, or the National Championships invitation of a Regional event, or the $5,000 purse of a $5,000 tournament ...

States, to me, marks the dawn of the new year. It is the first tournament, typically, where we wake up and smell the new cards intermingling with last year's Block Constructed decks. It sets the tone for the next 6-10 months ... sometimes all 12!

Plus, it's just too fun.

States is the tournament, more than any other, where players play for the love of the game. That's what happens when there is no Blue Envelope, no minor league Blue Envelope and no gigantic cash prize. The people playing are playing to play, to learn, to see what is about to happen for the rest of the year.

There seemed to be a fair amount of Mono-Green Eldrazi Ramp decks like we looked at with Tim Landale last week.

There was even more White-Blue Control, like we pored over with Pedro Quintero.

But there was a lot of innovation, too. I can't possibly go over every deck, so we'll have weeks and weeks of things to talk about. But here come some of the big winners from States and Provincials, hopefully specific takes on decks you haven't seen before.

Might as well start with the big winner from my home state, New York!

Nick went with a Blue-Black Control deck, inspired by the Blue-Red Control decks, but improving the mana considerably. He got Drowned Catacomb, Darkslick Shores, and an alternate win condition in Creeping Tar Pit.

But one of the big cards that a black second color gave him was Memoricide. 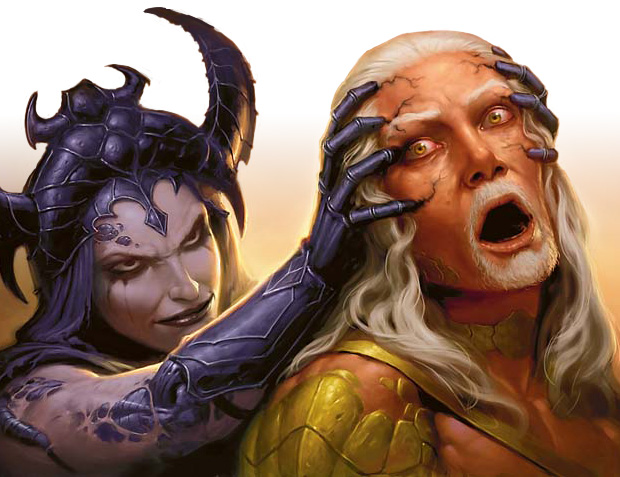 The second (or is it third at this point?) coming of Cranial Extraction was an unusual main deck choice for Spagnolo; he ran it specifically to take out Primeval Titan, which are ubiquitous in this format, and hard to beat when they hit the battlefield.

The black splash gave Nick Grave Titan to supplement his Frost Titans—with Grave Titan being a bit better against opposing copies of Jace, the Mind Sculptor.

In addition, he got a ton of black removal—most of it instant speed—which could be more helpful against the fast creatures of a Red Deck than a White version's sorcerous Day of Judgment, and more relevant against another control player's creature-lands as well. 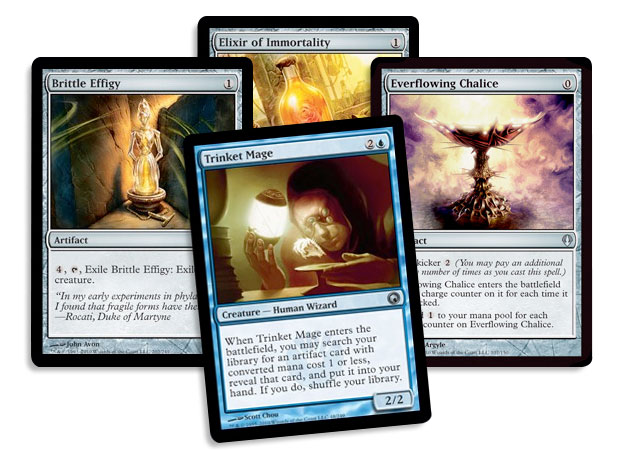 Elixir of Immortality gives Nick's deck the ability to win an exhaustion war, or just re-buy all his countermagic after he's used it.

I got a chance to talk to Nick a few minutes before the Top 8 started. At the time, no one yet knew he was going to take the next three rounds!

There isn't much further afield of a Blue-Black Control deck than a Red Deck. Here are three that are way different than most of what you've probably seen so far:

Cannon's deck has tons of artifacts!

All those Basilisk Collars and Mox Opals make his Kuldotha Rebirths playable to begin with, and Galvanic Blast quite good. 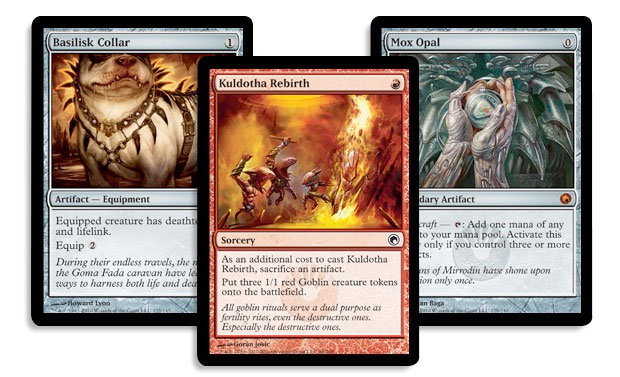 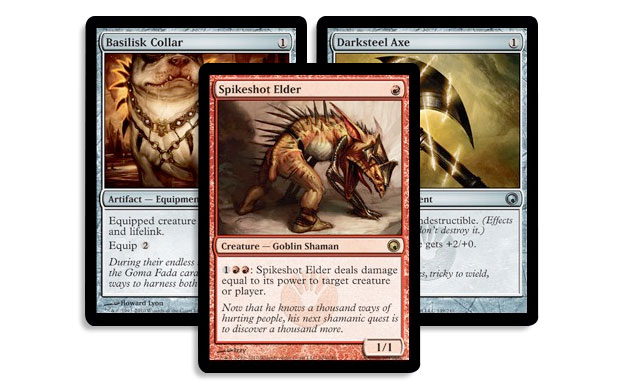 The deck seems super straightforward—Goblin Bushwhackers and Memnites and even Kuldotha Rebirths and Goblin Chieftains all holding hands and running into the Red Zone together. However, there is a good bit of room for different plays, especially when moving around Equipment and counting to three for metalcraft shenanigans.

This is a deck that makes great use of (probably) the best card in Scars of Mirrodin, Koth of the Hammer. 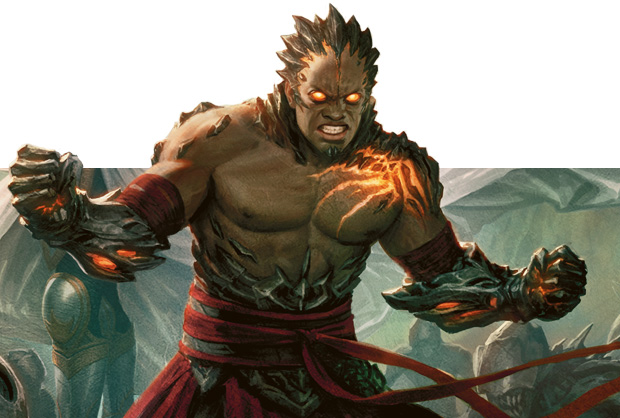 Mike Stewart's deck plays all Mountains (Koth's favorite land to team up with), and is full of expensive threats to power out. If he untapped with Koth onto the battlefield, Mike could cast any of his bombs, even the big six-costers like Wurmcoil Engine.

Another six-mana spell, and the centerpiece of one of the deck's sub-themes, is Inferno Titan. Inferno Titan is an incredible combo with Basilisk Collar. Yes, Inferno Titan can split its Arc Lightning-like ability across three different creatures—no matter how big—kill them all, net 3 life, and still smack the opponent for 6 (at least) ... while gaining life with that smack, too. 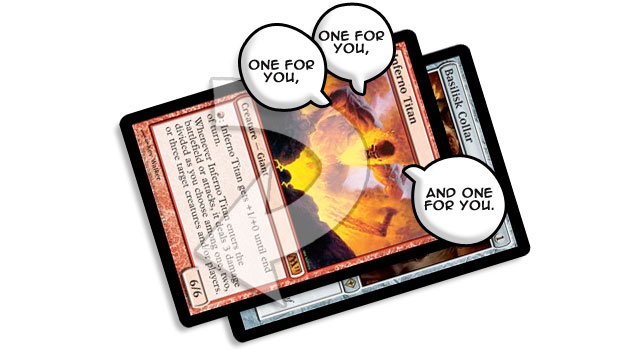 Of course, as long as you've got Basilisk Collar, there is no reason not to play its usual dance partner, Cunning Sparkmage. Molten-Tail Masticore works with the Collar, as well, but the new look at the dirty dog probably doesn't need much help.

Contagion Clasp out of the sideboard keeps Koth, Ratchet Bomb, and Everflowing Chalice all in good working condition, while proving lethal to Lotus Cobras and so forth at the same time.

Brian Siu ran a list by one of Magic's finest deck designers, Gerry Thompson. This is an aggressive deck with many different, distinct—but still synergistic and related—attack angles. 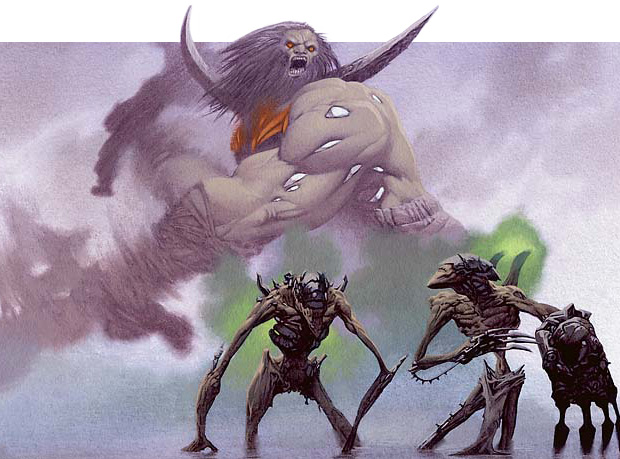 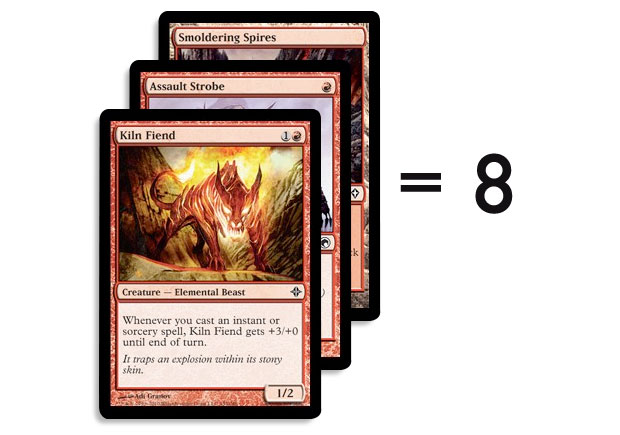 This take on the Red Deck has returned somewhat to the landfall elements that made last year's States so hot. Zektar Shrine Expedition makes a fine comeback alongside Plated Geopede ... and Mark of Mutiny?

Is there something spicy going on here?

What is the scariest creature you are likely to face in the present Standard? That's right, the jolly green giant, Primeval Titan. So when you go and grab a Primeval Titan with Mark of Mutiny (two more in the side), you can attack for not just a trampling 7, but with Plated Geopede on the battlefield?

Two more lands mid-combat is another 4 damage, and when the lands that Primeval Titan digs up are Smoldering Spires, nobody blocks. Basically, it's all a disaster (for the opponent). Assault Strobe is great with a stolen Titan, gigantic Geopede, or leveled up Kargan Dragonlord, as well.

On the topic of popular deck designers, Michael Svein benefited from a list by Patrick Chapin. This deck takes advantage of the third planeswalker—and solo gold card—from Scars of Mirrodin, Venser, the Sojourner. 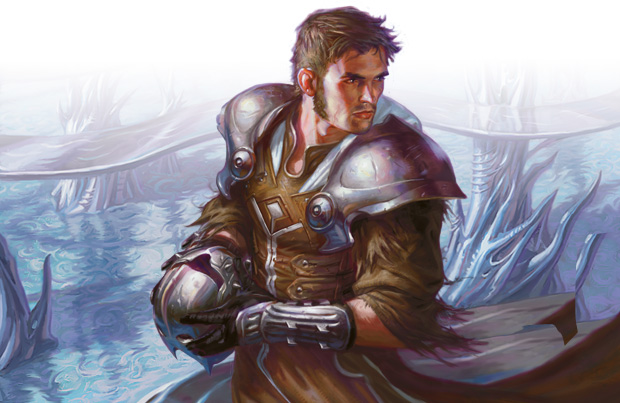 Venser combines with a number of cards that generate effects when they enter the battlefield. Examples include card drawing from Sea Gate Oracle or Spreading Seas, or locking down permanents with Frost Titan. Venser can reset Jace, the Mind Sculptor or move around Volition Reins when a more interesting target presents itself. 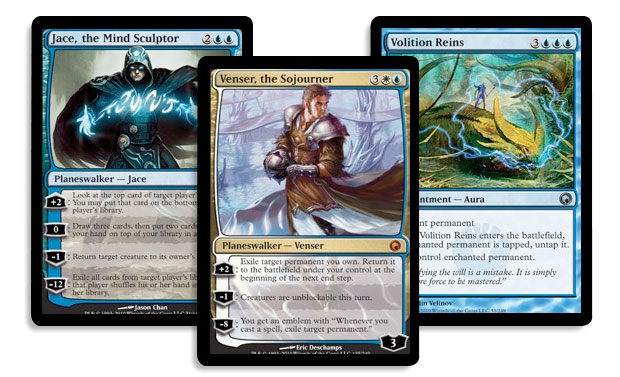 Overall, this deck has a lot of flexible answers headlined by Into the Roil and Ratchet Bomb (can answer anything), efficient removal in the form of Lightning Bolt, and a fair amount of Countermagic. Long exhaustion wars can, and will, be won by the sideboard Ulamog, the Infinite Gyre.

Chapin's deck usually wins with Frost Titan. Here is a very different deck that wins with the same:

Actually, Brad Wantz's three-color deck has got both of the most popular Titans—Frost Titan (in the best color), and Primeval Titan (generally just the best Titan). Primeval Titan and Garruk Wildspeaker set up tons of mana, Destructive Force knocks it all down, ideally burying the opponent in the quicksand of manascrew. Both Primeval and Frost Titans live through the "mere" 5 damage of a Destructive Force, of course. 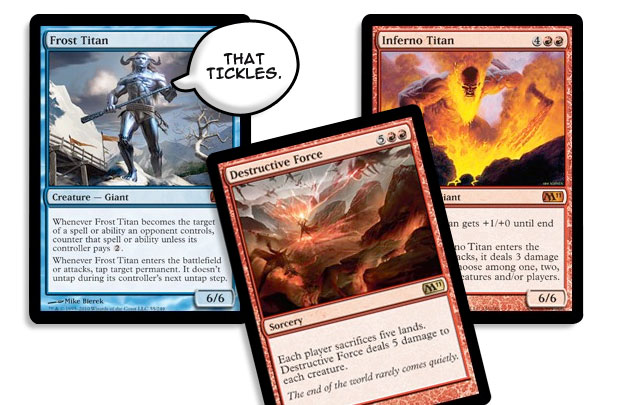 The green bombs enable the red bomb, but the blue ones seal the deal. Jace, the Mind Sculptor can keep the opponent from drawing into more lands, and Frost Titan can keep whatever meager lands the opponent does have nice and tapped.

All in all, a terrible way to die.

Speaking of terrible—in this case, pointy—ways to die, Christopher Reed rounds up this week's look at unusual winners with ... Vampires!

Don't count the mono-black bloodsuckers out quite yet. Despite the disappearance of team captain Vampire Nocturnus, the Vampires squad has kept around a number of strong members: 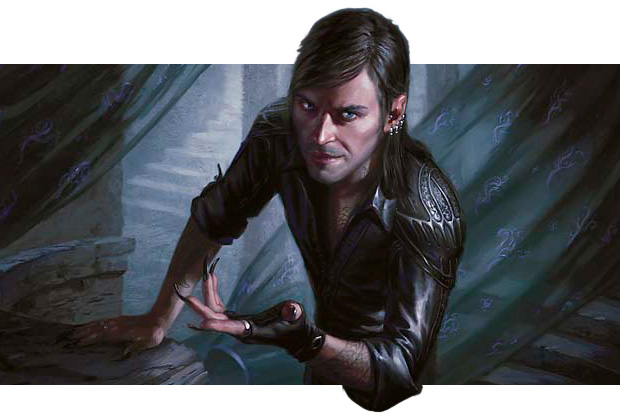 What I found unusual was that I always thought of Vampires as that deck with Mind Sludge. But Christopher didn't play that bomb sorcery in either his main deck or sideboard, instead opting for Duress and Memoricide. I guess if you take what really matters, and Memoricide can name that problematic Primeval Titan, it is less important to go over the top destroying the opponent's hand and game. The fifth mana might also have been an issue given Reed's mere twenty-two lands. 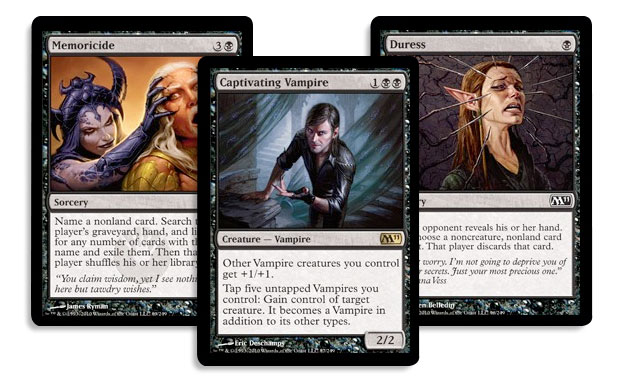 So where does this leave us?

Basically, you can play almost anything and be successful. Of course there is going to be a dominant strategy in any format. This time around, at least for now, it looks like Primeval Titan is the most powerful card. But that's fair, right? What are you supposed to get for six mana—green mana at that?

There are all manner of control decks, from Blue-Red Destructive Force like we looked at with Jason Ford last week, to the ever-present White-Blue Control decks, to Blue-Black Trinket Mage decks like Nick's New York winner, to three-color Venser decks with Sea Gate Oracle and Pyroclasm!

There is no shortage of aggressive strategies. We still have White Weenie, Equipment decks, and all manner of different red decks, from artifact-centric ones to all-in on Assault Strobe thanks to GerryT.

Every color is represented in the current Standard, up to and including almost every kind of mono-colored deck. Green has Primeval Titans and Elves, red has beatdown and Big Red, black has Vampires, and white has White Weenie. If blue is the odd-mono out, I doubt any of us are going to lose sleep over that one!

Consider the ball rolling. The conversation, and the Scars of Mirrodin Standard metagame, are yours.

Firestarter—What are you going to sleeve up for Friday Night Magic tomorrow night?