The locale-to-be? Paradise (aka "Hawaii").

I'd sort of like to say that Pro Tour Dark Ascension will be the Constructed debut of Dark Ascension, but the folks at Star City Games just had a Standard Open event that might give us an idea of what new cards will be high impact at this weekend's exciting Pro Tour.

Let's look at some of Dark Ascension's hits and where they can contribute in Standard decks both established and new.

The printing of Strangleroot Geist has helped to spawn a whole new (well new to the current Standard, anyway) archetype of mono-green aggro. Basically, we have a deck that can start fast on Llanowar Elves or Birds of Paradise and ramp into turn-two Dungrove Elder... or, if it misses the turn-one accelerator, "just" smash in with one of the most exciting green two-drops in years (the aforementioned Strangleroot Geist).

You'll note the deck's lands are all Forests (for Dungrove Elder), and it doesn't compromise for even one Inkmoth Nexus, Kessig Wolf Run, or red source. So no Primeval Titan engine. Instead, we have more offense, more "get there"-ness, in a Bellowing Tanglewurm.

This green packs the full four copies of Sword of War and Peace in the main deck, a clear nod to the color composition of the expected enemy, and an unambiguous eye toward racing.

Aside: How do I cast Glissa, the Traitor? 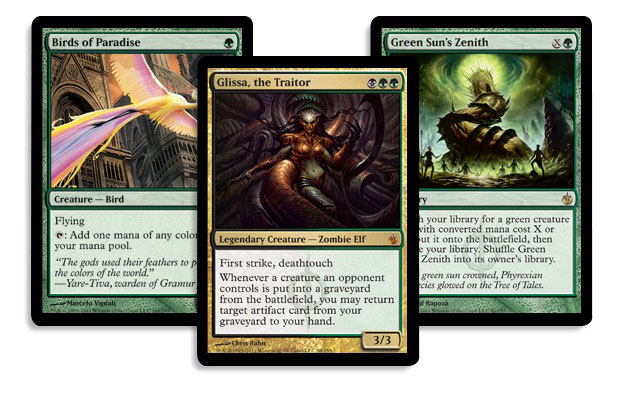 Brown also played a four-pack of Swords, also had the Dungrove Elders potentially on turn two, and of course also had the Strangleroot Geist... but he went all-in with more aggressive drops, bringing back Brian Kibler's Skinshifter as well as incorporating new Dark Ascension threats like Predator Ooze and Wolfbitten Captive / Krallenhorde Killer.

Although redundant at the three-drop, Predator Ooze does lots of things. It can stop nearly any attacker in the short term and makes for a dangerous offensive weapon in the long term.

Wolfbitten Captive is potentially quite the one-drop. If the opponent doesn't do anything on the first turn (which is going to be the case a fair amount of the time) you can just rumble in on turn two with a Hound of Konda-like werewolf. And whether or not Wolfbitten Captive flips, you have the opportunity to pump for extra damage!

Ben Isgur finished second in the Standard Open with this deck, which is an update to one of the most popular decks in pre-Dark Ascension play. Some things to note:

Dungeon Geists wasn't the only new white-blue flier to make a splash in Delver decks. Harold White played Drogskol Captain as a combination efficient threat and possible future super synergy. When Drogskol Captain combines with other Spirits (including not only other Drogskol Captains but the token spawn of Moorland Haunt), White had an extra offensive bonus.

Such other Spirits might also include, you know, the tokens produced by Lingering Souls, which is considered by many to be the strongest new card in Dark Ascension. Lingering Souls is essentially a non-instant upgrade to the already popular Midnight Haunting. For the same mana (albeit on your own turn) you can make two flying creatures. Great! Players were already willing to spend three mana to make two 1/1 fliers... but what about just two? For that matter, what about just two mana but for zero more cards?

The "Esper Delver" shell (where Lingering Souls lives in the successful white-blue archetype, where it even has synergy with Delver of Secrets; black essentially for the flashback) seems like it will be a common home for this new card. Drogskol Captain is just gravy.

Reigning US National Champion Ali Aintrazi did something a little bit different with his Dark Ascension deck:

Havengul Lich, here, combines with Heartless Summoning to build an engine. One of them increases your access, the other makes your extra cards more affordable.

Or, you can get your board wiped but then cast all your creatures and your opponent's creatures with this guy. Pretty cool.

Havengul Lich—new functionality or no—is a two-of in Ali's deck; his new-card four-of of Tragic Slip is something else (and will probably prove one of the most commonly played cards in the set, across many decks). Tragic Slip is a great new removal card that happens to be absurd (or just highly relevant) in the format. It gives you a way to fight first-turn Birds of Paradise or Delver of Secrets, but is also a great card that can deal with huge threats later in the game, given a little bit of setup. Probably won't come up very often, but I like how you can make a seemingly indestructible Blightsteel Colossus fall to its doom on a banana peel right into a cemetery plot.

Mark Kelso finished just out of the Open Series Top 8, but did so with what I would guess will be one of the most popular archetypes this coming Pro Tour weekend.

3 Sword of War and Peace

But the new Dark Ascension card in question is Thalia, Guardian of Thraben.

In Standard, a turn-two Thalia is extremely annoying for some decks. Kelso's White-Blue Humans itself is not bothered particularly much. Its curve is low and the vast majority of Kelso's cards are creatures anyway.

Imagine being on the draw, with no one-mana removal spell, and facing down a turn-two Thalia. No, it isn't "game over," but if you were planning to go Think Twice or Desperate Ravings on the second turn... well, you have to pick something else to do. Thalia makes it annoying to play even relatively cheap library manipulation. And what if your answer is a Doom Blade? Two-mana point removal is now three-mana point removal.

Thalia is just super solid, inexpensive (both in terms of mana cost and in terms of fitting a fairly efficient two-drop into your beatdown deck), and will probably be all over this weekend's coverage.

So this is the umpteenth control deck by Shaheen Soorani featured in Top Decks over the years. Soorani is typically a white-blue man, but dips into a little black for Sorin in this build. Sorin and removal, that is.

Interesting thing you might not have noticed: One Curse of Death's Hold not only contains lots of the cards we have talked about today—from turn-one attack drops or accelerators to powerful new utility threats like Lingering Souls—but also someone else's Sorin. Curse of Death's Hold stops someone else's 1/1 tokens. You can keep the opponent from profiting with the –6 via Karn, your own Sorin, or Ratchet Bomb.

Speaking of Ratchet Bomb, it will be one of the most important answer cards in Dark Ascension Standard. Not only is it just a good defensive card, what with everything from solid one-drops to tons of tokens (Ratchet Bomb for zero being fast as well as efficient) to Delver of Secrets (itself both a one and a zero), but Ratchet Bomb can gobble up the all-important Honor of the Pure (or other awesome equivalent). Not only is a Crusade effect potent when you are talking about having a ton of small guys in play, but one Honor of the Pure fully counteracts one Curse of Death's Hold. And it's obvious Shaheen's deck is more than willing to pay five mana (that is, "much more") for something to that effect.

How about Sorin himself?

There is some very solid synergy in the planeswalkers department of this deck. It is almost like Jace, Elspeth, and Ajani got the band back together! Any planeswalkers can do productive things for no mana, so when you have more than one in play at any time, over time you can do lots of things while using your actual mana for other productive things. Meanwhile, your opponent is attacking them (or trying to) and you are—in addition to doing sometimes flashy and sometimes simply useful things with your planeswalkers—leveling them up for some eventual fireworks.

And sometimes they hold hands all nice-like and really work together well. 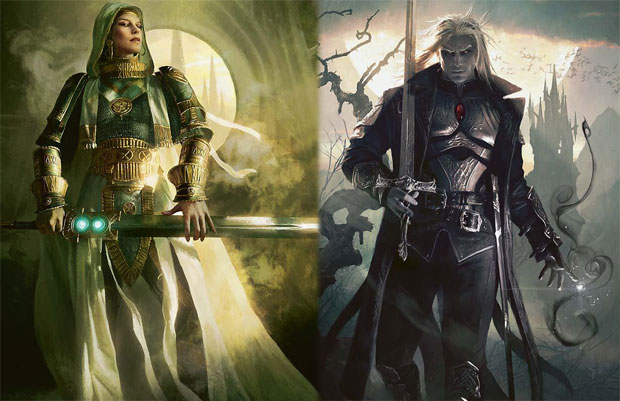 A great example is the Dark Ascension poster child (literally!) in question and Elspeth Tirel. Sorin makes 1/1 creatures that pre-load the board for Elspeth. Tokens and emblems (two of Sorin's three) work nicely with Elspeth's –5, while both of them together can create a smokescreen of tokens to defend any and all planeswalkers while the opponent has to commit more and more resources into an eventual Day of Judgment or other shenanigans.

And really, hiding behind a ton of tiny guys while you get ready to ultimate Karn is about the most fun you can have in Standard!

As for Dark Ascension cards to be watched for this weekend—there are lots.

And archetypes? There are plenty of different and engaging decks. We have aggro in White-Blue Humans or Mono-Green Strangleroot Geist, Aggro-Control in the Delver decks, and full-on control like Shaheen's deck. The format has plenty of mid-range and board-control cards. And while it might not fit a strict model, Heartless Summoning feels kinda "combo" to me (certainly you start to key on that "dirty feeling" come a quick Heartless Summoning).

This weekend's coverage is probably going to be beautiful.

And not just for the gorgeous scenery.