Born of the Gods Preview—Bile Blight

elcome to the first preview week for Born of the Gods. Today's preview card is sure to make a big impact in Standard, and it may have implications in Modern as well. It can be hard to weigh the value of this type of card against all the others like it, but cards as powerful as today's preview don't show up very often.

In the old days of Magic we played Terror, and it was quite the deal. We could spend a measly two mana and dispatch huge threats like Force of Nature, Serra Angel, or Shivan Dragon. Many years went by and Terror remained one of the most archetypal, solid, and versatile spells available for black players who needed a good removal spell.

History tells us that today's preview card will be good, maybe even great. Let's take a look at the latest powerful two-mana removal spell. 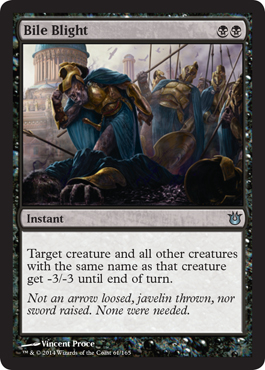 Bile Blight may not deal with huge monsters like Polukranos, World Eater or Stormbreath Dragon in the same way that cards like Ultimate Price or Doom Blade do, but Bile Blight is rarely stuck in your hand the way Standard's other two-mana removal spells are. Doom Blade is a great card, but mono-black decks are a huge factor in Standard and we have every reason to believe that they will continue to enjoy some level of success. Doom Blade may be the absolute best two-mana removal spell against Gruul or Selesnya opponents, but in the mono-black matchup it can only target opposing Mutavaults, and, well, that's just not very good. Ultimate Price solves this issue to some degree, but cards like Fleecemane Lion and Boros Reckoner are sure to be adopted by a lot of aggressive strategies, and we may find ourselves getting beaten up with a spot removal spell in our hand. Bile Blight suffers no such issues. It's live in the mono-black matchup, and it's going to be great against the red-green-white color combinations and mono-blue also.

Bile Blight's second line of text is also extremely relevant. It's hard to weigh the value of this little bit of text, but it's sure to make our opponents play the game much differently. Was our opponent planning on attacking with more than one Mutavault? He or she better think about that decision a bit! In fact, playing any creature with 3 or less toughness in multiples becomes a major liability when there's a chance that Bile Blight might be looming in the future.

Going forward, Bile Blight will be an important tool against token strategies when and if they become popular. For just two mana, we can deal with the entirety of Spectral Procession, kill an army of Goblin tokens, or kill any and every Pestermite on the table, even if there are thirty billion of them.

Diversifying our removal spells is important. Hero's Downfall can be played as a four-of because it's always going to kill exactly what we want it to kill. A card like Bile Blight is inexpensive and versatile, but playing a full four copies may be a bit ambitious before we know what the Born of the Gods Standard will look like. Bile Blight won't be very good if the format is just a bunch of control decks, but I strongly suspect we'll continue seeing creatures do well, and that makes Bile Blight one of the stronger cards in the format.

We should definitely be playing all the other commonly used Mono-Black tools that are available to us. Pack Rat gives us degenerate draws that can take over games and make short work of our opponents. (As long as they don't have Bile Blights of their own to absolutely destroy us.)

Nightveil Specter is legitimately awesome and deserves four slots in our deck for sure. Nightveil Specter provides us with a steady stream of card advantage, a great defensive body against aggressive decks, and a whopping three devotion to black.

Gray Merchant of Asphodel provides the Mono-Black Devotion deck with an incredible tool that makes it difficult to race.

Thoughtseize provides us with some much-needed disruption to protect our Desecration Demon from Selesnya Charm, our Pack Rat from Bile Blight, and our Nightveil Specter from whatever removal spell our opponent might have to deal with it. It's also an excellent tool to nab things like Voice of Resurgence, that can be very powerful against us, especially if they're drawn in multiples.

Underworld Connections provides us with some much-needed card advantage and black devotion. It helps turn on our Erebos, God of the Dead, adds additional strength to our Gray Merchant of Asphodel, and provides us with an extra card every turn.

The Mono-Black Devotion deck is a tried-and-true strategy that's sure to be a huge factor in the new Standard metagame going forward. We can expect Bile Blight to further improve the deck's capabilities in many matchups and make the deck more prevalent going forward.

Be sure to check out all the Born of the Gods previews this week and next on DailyMTG.com. Next week, I'll be back with yet another preview card that's sure to spark some interesting conversation.