elcome to another week of Born of the Gods previews. Today, we'll be looking at a unique card that has the potential to do some very powerful things. There's something heartwarming about aiming a burn spell at your opponent's face without definitive knowledge that it will be lethal or put you in a position to win the game the following turn. Doming our opponent reminds us of a simpler time; a time where we didn't know any better. 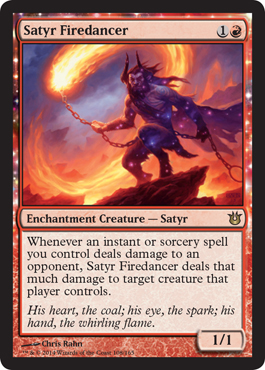 
This deck doesn't seem like it knows what it wants to be doing. Sure, the deck can draw well and beat just about anything, especially when it gets to be on the play, but we're going to lose a lot of games because of the deck's inconsistencies.


This deck seems a lot better. Chandra's Phoenix gives the deck longevity and another way to reward ourselves for aiming burn spells directly at the opponent. The deck's creatures allow us to get a lot of value out of each card we play. It's usually going to be correct for us to hold back with Satyr Firedancer until we can cast a burn spell on the same turn cycle. Against decks without removal we can just run the Satyr Firedancer out on the second turn and let it take the game over by itself. Boros Charm is usually a good card, but it becomes pretty absurd when we have Satyr Firedancer in play.


This version of the deck seems like it could be very fun and kill a lot of people before they have an opportunity to interact, but I'm not sure if it has the ability to go toe to toe with aggressive decks when it doesn't draw Satyr Firedancer, and its matchup against decks with ample lifegain is going to be rough before it gets access to Skullcrack in the sideboard.