A Box of Chocolates

he delightful yet simplistic catch phrase of 1994's hit movie Forrest Gump —"Life is like a box of chocolate. You never know what you're gonna get."—became a meme for describing situations where good and bad are mixed, apparently at random, and disappointment is bound to happen. 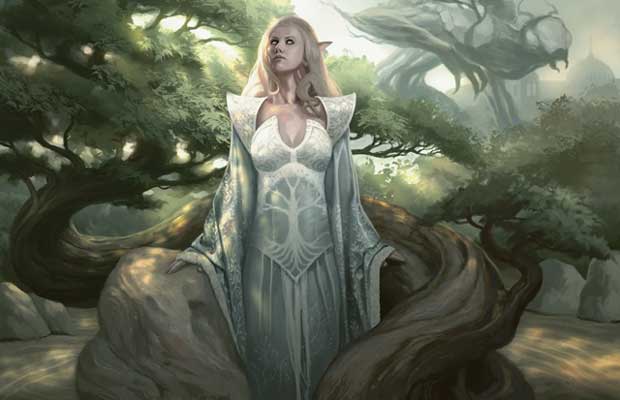 The six-card feedback prompt for us two weeks ago was for your suggestions for cards that work with token production for a Selesnya Commander deck but that don't produce tokens. It was also in the same article where we first saw the Selesnyan maze runner in Dragon's Maze , Emmara Tandris.

I'm a major fan of token decks and before giving the weekly feedback I think it bears mentioning that I would NEVER use Emmara in a deck. She may be large, at 5/7, but without built-in evasion most opponents will be able to immediately remove her before next turn. For just one mana more you could put Avacyn on the field for a flying, vigilant 8/8 that makes all your creatures indestructible. Which makes more sense?

Other than Avacyn, Angel of Hope requiring

for a Selesnya deck, I know you're not alone in thinking that. As a commander proper, Avacyn can't lead a Selesnya deck. As a card on the battlefield, Avacyn's ability is undeniably more powerful than Emmara's.

I like the format of Command Tower. When I'm looking to build a new deck, I don't really want to find a complete list, with no explanation of why it's built that way. I want to find obscure cards that would be fun to play or a good explanation on why a certain staple is considered as such. It seems like your article is going to deliver that in spades!

Regarding our dear friend, Emmara: I don't think that she's commander material. She just doesn't do enough on her own to merit being in charge. Rhys the Redeemed and Tolsimir Wolfblood are much better at that, I think. She seems to be fine as a support card, though, so I'd be happy to run her in my other 99.

Thanks for the article!

Thank you too, Joe, although I can't take the credit. It's readers who consider and thoughtfully send feedback who let us enjoy options for decks.

Rhys the Redeemed is extremely powerful as a commander. He was among my top choices for Commander for years, as the decklist I shared back during New Phyrexia proves. The ability to come down on turn one, produce a token on turn three, and begin doubling soon thereafter is a consistent way to come out of the gates strong. (So strong and consistent, in fact, that I took my Rhys deck apart. More on this later.)

One of the first cards I gave away to friends learning Magic when I was in college was Tolsimir Wolfblood. My buddy loved making tokens during the original run on Ravnica. At last year's Grand Prix Philadelphia, we met up after years apart and he showed me one of his favorite decks: a Tolsimir Wolfblood Commander deck, using the original Tolsimir I gave him. To be honest, I'm not sure Emmara would even fit into his deck as I recall it.

I received plenty of six-card submissions as well, but if you wonder whether I read and consider all the feedback, there's your answer. I've modeled this approach from true titans of Magic, such as head designer Mark Rosewater and his Tumblr, Blogatog. He had a lot more to say about where Emmara Tandris came from: 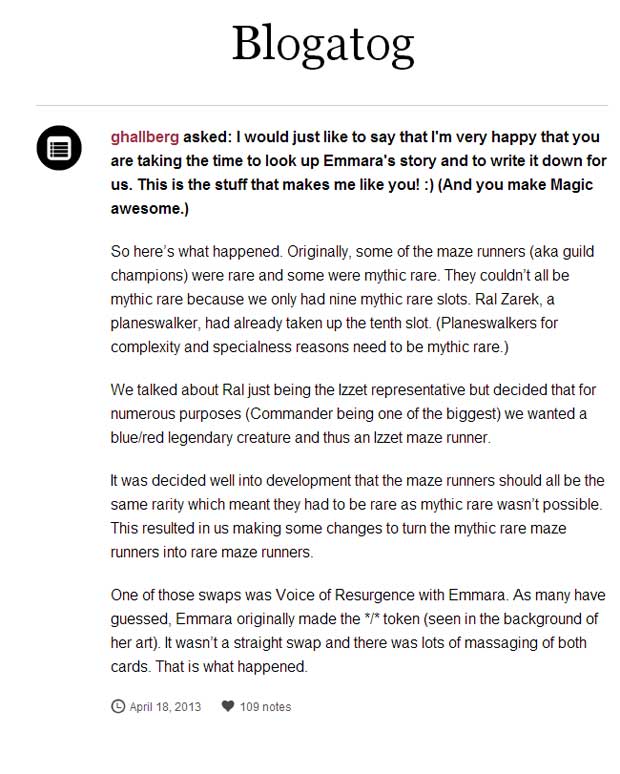 Feedback, too, is like Forrest's box of chocolates. You really never know what you're going to get.

Let's be clear: I like Emmara Tandris. Is she among the most powerful creatures—let alone cards—in Magic? Of course not. In fact, she reminds me strongly of something classic, like Legends's Sir Shandlar of Eberyn:

In the box of feedback chocolate, one I've personally encountered is the stark difference that creatures today have against the creatures of Magic's history. Commander evolved directly from EDH, created around the idea of using a legendary Elder Dragon, like Vaevictis Asmadi, as one's commander. The same Elder Dragons of yore seem pale next to today's choices, like Melek, Izzet Paragon.

And that's the real secret within the analogy we're beating to death: those chocolates you find disappointing can be acceptable, exciting, or favorites for others all at the same time. How do I know? Let's look at some of the six-card lists you shared.

Players like Mitchell see a token deck with Emmara Tandris as an opportunity to go all in on her ability:

Several recurring suggestions appear here, and all of them lead down powerful roads. Glare of Subdual and Privileged Position are standout cards I can attest to from their days in my own green-white decks. Palisade Giant, specifically with Darksteel Plate or Shield of Kaldra, is a growing trend to fighting damage. Mimic Vat and Séance are modern twists on getting copies of creatures that die.

But Mirror Gallery with copies of Iona, Shield of Emeria is a path I'll always choose to avoid. Locking opponents out of the game is powerful, but it's also a disappointment to those expecting to get to play. Insert your chocolate box reference of choice here.

Arena is the godfather to cards like Prey Upon and Pit Fight, and using a token with Emmara out is a clever way to clear out the opposition. Arena is reusable, although I wouldn't count it as a land in a deck. Similarly, I wouldn't count Beastmaster Ascension as an enchantment. As soon as you place all the requisite counters on it, it starts working. So save it for that moment you have a motley crew of token creatures that happen to add up to more than the quest counters needed. Play the Ascension, declare your attacks, add your counters, and hit harder than anyone thought possible.

Regal Force is what I'd call a staple in Commander. Similar to its function in the Legacy Elves deck, Regal Force can refill (even overfill) your hand after emptying it out creating creatures. When you're facing down multiple players, having opportunities to draw plenty of extra cards is potent.

Eldrazi Monument did dirty things in my Rhys the Redeemed days, and I have no doubts today's token decks can get the same use from it. While Loxodon Hierarch is a pleasant classic from Ravnica, it's Aura Shards I want to call attention to. Commander is full of enchantments and artifacts that can be annoying (like, say, Eldrazi Monument and Beastmaster Ascension), and Aura Shards is a way for token decks to turn every creature it makes into a Viridian Shaman too. When you see it at work it's a thing of beauty.

Speaking of Aura Shards, there are other cards that get the same lift from producing plenty of tokens, such as Alan's suggestions:

If we're making tokens, why not draw even more cards, gain even more life, and make them increasingly bigger for each creature we create? With Martyr's Bond, my favorite powerhouse sacrifice outlet for a token deck is Martyr's Cause.

Finally, there are staples that apply to nearly every deck with Forests, as Alma points out:

Loving your Commander column already. I learn a lot about older Magic cards and about a format I'm just exploring. Keep up the good work!

All the ramping, card-draw, and Equipment spells Alma listed will be a common thread in feedback. I don't want to say "I hereby ban all obviously good and staple Commander cards from feedback" because those same disappointing chocolates are delicious morsels many of you love. (And you thought the chocolate box analogy was done, didn't you?)

What I really like about Alma's choices are the hidden depth to them. Both Oran-Rief, the Vastwood and Gavony Township let a smaller number of tokens do more work, a great way to keep pace later in the game when mana is flowing—likely due to all those ramp spells. Wave of Reckoning was a common suggestion but I wouldn't call it a staple: It's clearly an excellent example of using Emmara Tandris to transform a spell that usually affects everyone equally into a one-side Day of Judgment, much like what Hour of Reckoning does already for token decks.

Oh, and Alma, thanks!

There is just one more staple that was suggested regularly, and Adam summed it neatly:

Seedborn Muse, particularly with a token producer like Rhys the Redeemed or Ant Queen, quickly gets out of hand. It's a surefire way to gain power, but often comes at the price of everyone's crosshairs getting aimed at you. Summoner beware.

Why I picked Adam's feedback to explain Seedborn Muse was for another clever pick: Tempting Licid. Repeatedly forcing your opponents to have to block just a tiny Saproling (one that likely isn't taking combat damage anyway thanks to Emmara) is a way to punch through damage anytime. If the allure of Lure is enticing, Gorgon Flail is something to consider, too.

The mix of feedback for this week was something I didn't expect, but I found it interesting nonetheless. Between the ups and downs of Emmara Tandris and the cute and common choices mixed in your six-card picks, each week I'm surprised by what you all think. I hope you're enjoying each other's looks too.

This week's prompt is a little different, but it's a play on the mixed theme of today's article. This is the first community scope prompt, but it's still answering a question:

What is the most important kind of card for a Commander deck?

The question is intentionally vague because I'd like you to respond with that your first instinct is. Do you consider lands and mana sources the most important? Or is it the choice of commander and what that means for the deck (if it means anything)? What about the power of cards, or the fact you never see them used anywhere? Is there something entirely unique or different about how you look at cards? Whatever you feel is the most important about the cards you use is what I'd like to have shared.

Join us next week when we see what Dragon's Maze is really all about. See you then!