A Brief History of Forestfolk

oday I want to do something a little bit different. Sure, we're going to go over some of the new Top Decks from important Standard tournaments around the world, but seeing as it is Core Set Week, I wanted to highlight my favorite new-to-the-core-set card from Magic 2012: Forestfolk!

You don't know what a Forestfolk is? 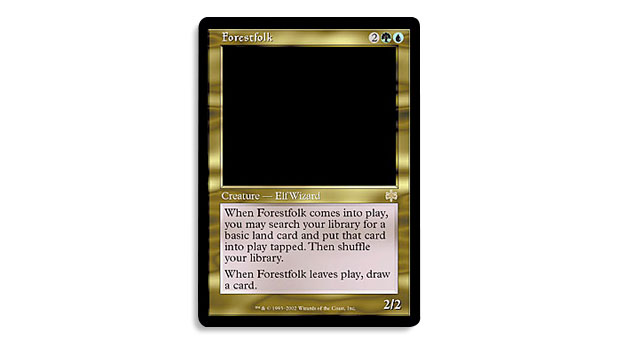 R&D did something special with Forestfolk when they printed it in the original Mirrodin block: they took the blue and green mana requirements out of Thoren's original proposed card, making it the artifact we know as Solemn Simulacrum.

In doing so, they created a card that would obviously see wider play than in a (presumably narrow) green-blue midrange deck. In fact, Solemn Simulacrum—from its first appearance—has been a defining component of every Block Constructed, Standard, and even Extended format... essentially the entire time it has been legal.

You have to look no further than the very first Pro Tour that the card was legal to see how awesome it was.

Eight for eight. Pretty awesome, right? It's not just that the card made its way as a four-of into two such different decks, in the two top spots in the Pro Tour... You could play Ravager Affinity in that format.

For sake of comparison, here is Magic Pro Tour Hall of Famer Jelger Wiegersma's deck from the same Top 8:

The following cards from that deck were banned in formats various:

And yet, we saw eight Solemn Simulacrums staring across from one another in the PT finals! 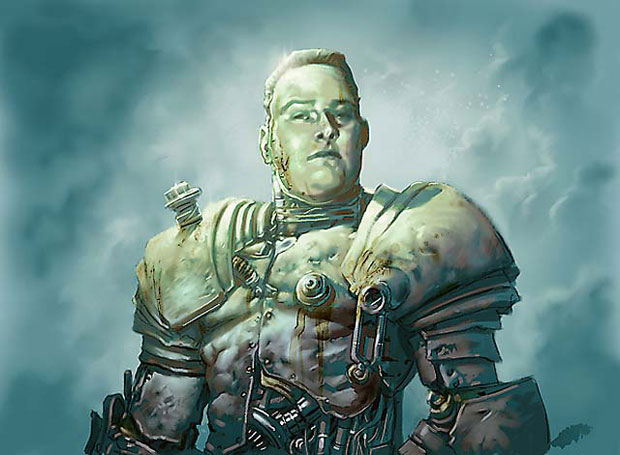 Solemn Simulacrum is a special card, and offers a lot to be excited about. In the Kobe finals we saw the mighty Nassif with a big green big mana deck, against Kuroda piloting a Tsuyoshi Fujita–designed burn deck. The two decks probably couldn't be more different, but they both took advantage of Solemn Simulacrum: Gabe used it to ramp to more and more mana for his Tooth and Nail, while Kuroda fueled Shrapnel Blast while getting a little bit back.

Last week's Top Decks was entitled "Play Dismember!" ... Well you know what? Now that we have M12, I think maybe you should think about playing Solemn Simulacrum!

Because R&D (wisely) took the blue- and green-specific mana out of the eventual Solemn Simulacrum, the card was allowed to make contributions in a number of different decks, with a number of different purposes. By US Nationals in 2005 the next year, Solemn Simulacrum found its way into five of the Top 8 decks at that tournament, everything from the blue equivalent to Tooth and Nail (three times over, actually), to a Kuroda-style burn deck, to a Black-Green Death Cloud deck.

Chris Manning's Black-Green Death Cloud deck shows us one of Solemn Simulacrum's most useful features: the ability to jump from four to six mana in one step.

Basically, you have four mana (to cast the Solemn Simulacrum), tutor up a land (five lands), then play one the next turn (six lands)... and you can tap for a huge six—for example, in Manning's deck, Kokusho, the Evening Star.

Solemn Simulacrum is great because not only does it act as a Rampant Growth, but you can benefit from it, even when it is leaving the battlefield! That is just one of many reasons Solemn Simulacrum was effective in Manning's deck...

... and something to think about, as we have, maybe not Death Cloud, but baby version Smallpox (which operates most of the same way, if on a—ahem—smaller scale).

Antonino De Rosa's deck from that same US Nationals gives us a different Solemn superpower:

Many different decks in that year's Nationals Top 8 used Solemn Simulacrum the same way: To give green to the greenless. Check out how Solemn Simulacrum allowed Ant to set up the solo Swamp for his Cranial Extractions!

Basically, a colorless Rampant Growth that can block!

This past weekend was the Japan National Championship, and our first look at that card in the current Standard format. How did it do?

Itou and Tamada both played Solemn Simulacrum in their respective Valakut ramp decks.

Both decks played Rampant Growth in addition to Explore to move from two to four, the magical price point of a Solemn Simulacrum. From there, Solemn Simulacrum could send the Valakut players to the promised land of Primeval Titan (or even more expensive spells, like Avenger of Zendikar in Itou's build).

It may seem a little silly for a deck known for early-game green acceleration in the face of playing lots and lots of Mountains, but nobody runs good all the time. Solemn Simulacrum (as a colorless source of mana acceleration) can help the deck find the kind of land it needs, right now. Even after the opponent has dealt with your big guy (but you are still staring at a Valakut on the battlefield), Solemn Simulacrum ain't half bad. It's still a "Mountain" ... but has a ton of defensive (and, if you're really lucky, offensive) battlefield presence.

In the same Top 8, we had this fine specimen:

1 Go for the Throat 3 Disfigure 2 Flashfreeze

I love this deck!

Blue-Black Control was already one of the most popular and successful archetypes in Standard, and it looks like it just got better with the addition of Solemn Simulacrum.

Point being, the ability to ramp is much more valuable and rare in not-green than it is in green, and Takao has taken good advantage.

In another sense, Solemn Simulacrum takse the place of your missing Jace, the Mind Sculptor... It costs four, it gets you a card or two, and it can run in front of an onrushing train to save you a few life points of damage (you know, kind of like Jace's Unsummon); and if you have about ten turns, it will even win the game for you! 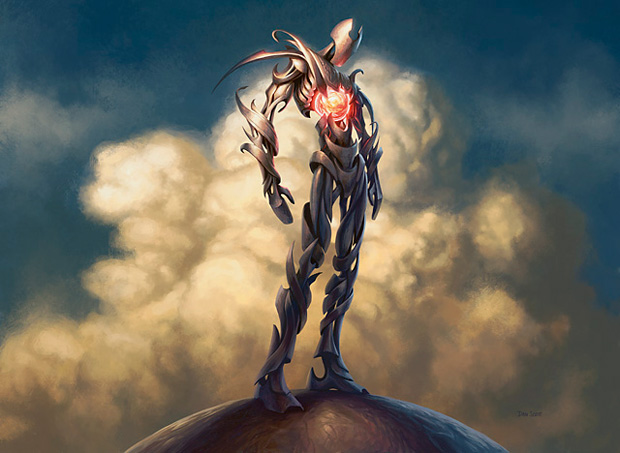 No, Solemn Simulacrum is not Jace, the Mind Sculptor, but you can see how in a deck like Blue-Black Control, it takes on a lot of the heavy lifting, and fills the gap somewhat, left by the departing former best card in Standard.

Solemn Simulacrum, the singleton Wurmcoil Engine, and sometimes an unspent Ratchet Bomb will Voltron together... to cut a mana off of Stoic Rebuttal!

Meanwhile, at the StarCityGames.com Open in Cincinnati...

I know the word—the shard name—carries with it certain connotations: the unearth ability for one; a mighty sweep over Standard for close to a year, the lucksackery of Bloodbraid Elf into Blighting, and the terror of a turn-two Putrid Leech on the play. 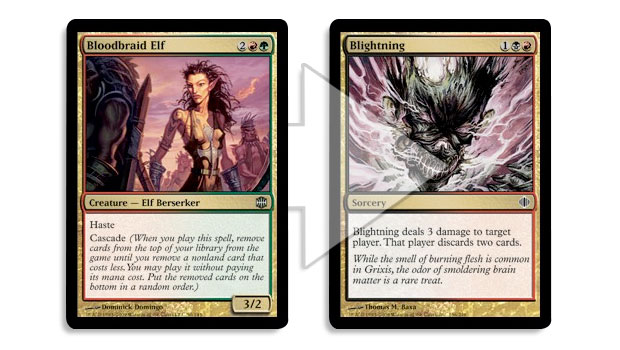 But Jund was the good guys, in a way. Bloodbraid Elf did its darnedest to keep Jace, the Mind Sculptor in check, and everything it called up from the bottom of the bench to the top of your deck helped in the planeswalker-suppression cause: Lightning Bolt, sometimes another hasty attacker, or Blightning, of course.

Well, Korey Fay's "Jund" is not any of that. This is a deck that shares the shard colors (and to be fair, some card selection from later builds), but not the Shards of Alara block trademark abilities.

2 Go for the Throat 1 Despise 2 Pyroclasm

Ultimately this is a collection of very good cards, from Grim Lavamancer on one mana, to Lotus Cobra on two mana, on up the chain.

Lotus Cobra with a third-turn Marsh Flats or Verdant Catacombs can explode Fay's deck up to immediate Garruk, Primal Hunter position... another favorite-to-be from the newest core set. That play is kind of amazing; you can level up a planeswalker and improve your battlefield position with a 3/3 on the spot.

And what is the average opponent going to do on the third turn that is so much better than just a 3/3? That's what I thought.

Fay has first-turn plays in both black and red, plus the optimal draw around second turn Lotus Cobra... in a build that requires

at the top end! His mana accelerating / color-fixing creatures are working overtime.

Speaking of working overtime, there is another five drop worth mentioning that you might not have seen elsewhere:

As a five-drop, Kazuul can come down with some friendly Lotus Cobra setup, no problems. As a 5/4, Kazuul is reasonably big for its cost... but in the world of 5/5 Baneslayer Angels that don't always see play and 9-total-power Precursor Golems at the same curve point, a 5/4 frame is not what makes it worth talking about. 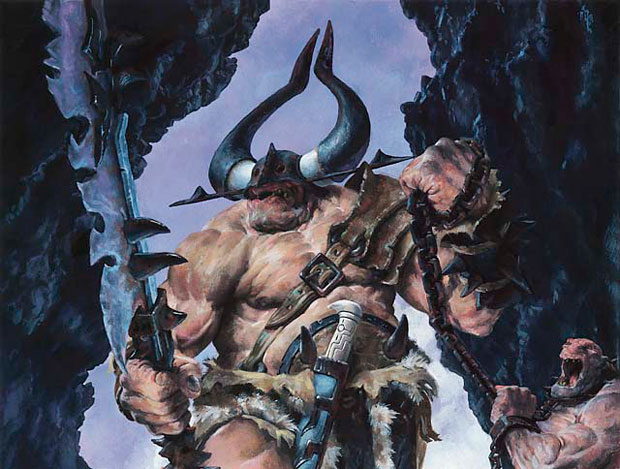 Specifically against Deceiver Exarch / Splinter Twin, an unanswered Kazuul is essentially trump. While Exarch Twin has access to limitless token creatures once assembling the Deceiver Exarch + Splinter Twin combination, it doesn't necessarily have limitless mana (in fact, one of the great things about Exarch Twin is the ability to win on the spot when the opponent is shy for mana, like when the opponent is tapped out on the third turn). So you can attack with 1/4 guys all you want... as long as you are okay with the opponent getting a permanent 3/3 for every temporary token you are swinging with (that isn't bribed by three mana, that is).

I don't know if any combo player is okay with that at all.

in a format that by no means guarantees the continued safety of your Lotus Cobra? Only one thing to say about that really:

If you're like me, you're going to get used to saying that one for the next year (or more) in Standard!