he last PTQs for Pro Tour Theros are in the books. This Standard PTQ season has been one of the most dynamic in Constructed history. A new archetype or new version of a previous archetype seemed to spring up every week. As it turns out, the end of the PTQ season is not the end of Standard's hyperdrive evolution. Standard has undergone some big changes over the last two weeks. Today, we'll be taking a look at the new face of Standard. We will discuss the major archetypes appearing on Magic Online, specifically focusing on why each deck is strong in the current format.

Standard has become increasingly midrangey over the last two weeks. Aggressive Burning-Tree Emissary decks have become mono-red in most cases to harness the power of Burning Earth to its maximum potential. Red-White-Blue Control, a tier-one deck just two weeks ago, has drastically faded in popularity and success in the face of Cavern of Souls, Thundermaw Hellkites, Planeswalkers, and the newest versions of Junk Rites, which present an incredibly difficult matchup. 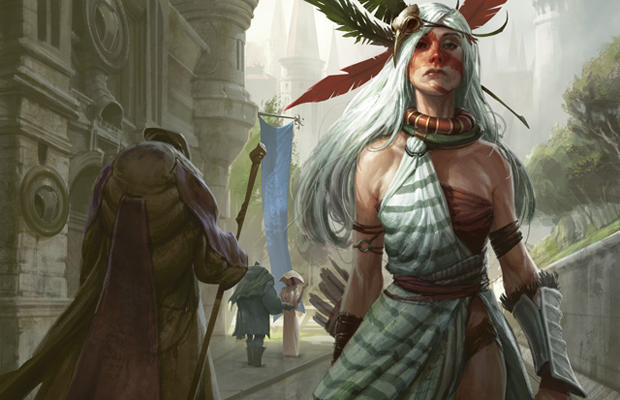 Let's take a look at some decklists:

White-Black-Red Human strategies have been posting incredible numbers over the last two weeks. The deck plays similarly to the original Aristocrats deck, but Xathrid Necromancer drastically increases its overall power level. The deck is incredibly good at grinding out its opponent. Blood Artist in conjunction with Doomed Traveler, Xathrid Necromancer, or token production ensures you can win a race against any non-Bonfire of the Damned creatures strategy simply by chump blocking and sneaking in points of damage whenever possible. Removal spells have become less prevalent with Red-White-Blue and Jund decreasing in popularity. This allows the White-Black-Red Human deck to take full advantage of Skirsdag High Priest and its unlimited Demon-creating potential. The deck also features aggressive Champion of the Parish draws that threaten to run an opponent over as he or she stumbles with a hand that seemed keepable against a midrange opponent. We can expect this deck's success to be aligned with the success and popularity of the midrange strategies that it performs well against.

Straight Blue-White Control decks have been replacing their Red-White-Blue counterparts. Pillar of Flame, Warleader's Helix, and Assemble the Legion are all less necessary than they may have been in previous weeks. Burning Earth is more of a threat than Voice of Resurgence. (Voice of Resurgence isn't seeing much play at the moment.) Ratchet Bomb and Celestial Flare allow players to stick with a two-color plan without leaving themselves leaning too hard on a few copies of Azorius Charm. The deck's Planeswalkers perform well against decks without Thundermaw Hellkite or Falkenrath Aristocrat. Sphinx's Revelation strategies suffered in past weeks when they were fighting droves of aggressive decks with lots of undying/Voice of Resurgence, but as the format slows down there's going to be a lot more room for the big spell.

Junk Rites has undergone some huge changes over the last week. The deck has become less expensive and reliant on its graveyard plan in the wake of Scavenging Ooze. Disciple of Bolas alongside Shadowborn Demon leads to some nearly unbeatable draws and the deck dominates slower strategies and crushes most midrange decks. The deck still struggles with token strategies like Junk Aristocrats, Red-Black-White Humans, Blasphemous Act Aristocrats, and Green-White Tokens. However, its incredible matchups against blue decks, Jund, and Naya are enough to push this deck out of obscurity and back to the top of the competitive end of the spectrum. The deck also performs well against Burning-Tree Emissary decks when on the play, making it less of a gamble than previous versions that didn't play Loxodon Smiter. Arbor Elf and Avacyn's Pilgrim can be played without fear of Bonfire of the Damned because the deck gets so big so fast and recoups losses easily with its endgame card-advantage engines.

1 Cavern of Souls 4 Huntmaster of the Fells 3 Olivia Voldaren 4 Bonfire of the Damned 3 Rakdos's Return 2 Garruk, Primal Hunter 3 Liliana of the Veil
75 Cards

Jund is still doing its thing, albeit not at the same rate as previous weeks. The deck has been a lot less successful recently, but that's largely because it hasn't effectively adapted to the new state of Standard. MaNz's list looks like a really good start to me. Lifebane Zombie still appears in a lot of main decks, but it often whiffs nowadays and it doesn't apply the same kind of pressure in a world of Desecration Demons, Shadowborn Demons, and Disciple of Bolas. Jund will certainly be a powerful deck once it settles into the new metagame, it's just a question of whether or not that will happen before the metagame oscillates again.

4 Flames of the Firebrand 4 Pillar of Flame

4 Flames of the Firebrand 4 Skullcrack

Burning Earth successfully spawned a number of successful Red decks. More aggressive versions of the deck are still popular, but the Big Red Deck is what really impresses me. The deck plays similarly to the Black-Red decks that dominated Standard last fall. This seems like a perfect time for that deck to come out of the woodwork and start crushing again. These decks want to steal games from opponents who are doing more powerful things. Trostani, Selesnya's Voice and Tree of Redemption are both starting to pick up some traction and they could spell disaster for Red decks going forward, but right now there's still enough room for maneuvering and burning the way to victory.

3 Liliana of the Veil 1 Vraska the Unseen

Green-Black Mutilate is the best-performing deck on Magic Online right now. Let that sink in for a moment. This is not a fringe deck anymore, this is the boogeyman. The addition of Scavenging Ooze, Mutavault, and Doom Blade have brought Golgari from tier two all the way to the top. The deck is similar to Jund, but its better in the mirror and it's less susceptible to Burning Earth. Desecration Demon is one of the best answers to Chandra, Pyromaster, the latest trend in Standard. This deck's versatility and lack of obviously bad matchups are a great sign that it will be a force to be reckoned with for weeks to come.

4 Advent of the Wurm 3 Selesnya Charm

The recent popularity of Red decks and the decline of good spot removal makes the Green-White Token deck very strong. Advent of the Wurm and Trostani, Selesnya's Voice both offer 5-toughness bodies that go over the top of Mizzium Mortars. This deck performs incredibly well when it isn't up against Supreme Verdict, Terminus, or Blasphemous Act.

2 Bonfire of the Damned 2 Mizzium Mortars

Kibler-esque Red-Green strategies have been seeing a lot of play in daily events as of late. The deck is good, but the current state of the metagame spells disaster for the future of the archetype. Green-Black Mutilate, new Junk Rites, Green-White Tokens, and White-Black-Red Humans all present scary matchups here. The format will likely shift again in the next week and this deck's pure power level will allow it to 4–0 Dailies even through a lot of hate, but we can assume this deck is on the downswing until the format changes again.

White Weenie isn't something I would have expected to be a force in Standard before Craig Wescoe unveiled his list at the World Championship. Sublime Archangel lets the deck go over the top of removal-light midrange strategies, but the deck is still weak to removal coupled with sizable bodies. This deck can be very strong in the right metagame; Jund will likely being playing more removal in the coming weeks and that may herald the downfall of this archetype until things change back.

Standard's constant flux accurately displays the healthy state of the format. Who would have thought that the late-August Standard format would be filled with two-color decks two months ago? Probably nobody. This was one of the best PTQ seasons ever. Don't let the fun end just because the last PTQ is over. Competitive Standard tournaments are being held on Magic Online all throughout every day of the week. Next week, we'll take a look at some of the more obscure formats on Magic Online.