Everybody loves a good deal. 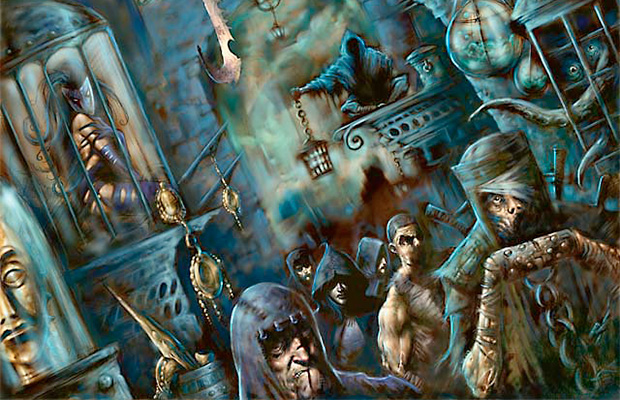 What makes a good deal in Magic is getting something extra for the same cost as something else:

If we were talking about these creatures on Twitter (I'm @the_stybs!) I'd be using the hashtag #Value. All three of those creatures are what I'd call "spell creatures"—each gives you something extra despite ample existing capability. It's this buy-one-and-get-one-free bargain that makes these kinds of creatures so valuable in Commander.

Getting every last drop possible out of cards feels necessary when you have double or triple the usual number of opponents.

That's part of what you find in Conspiracy, the multiplayer set for drafting you'll see at your local game store this Friday. As an aficionado of Cube (drafting) and Commander (multiplayer), finding a booster pack-sealed set filled with #Value has been exciting for me.

Creatures that give more are inevitably what fill my piles when building new Commander decks, and it's a clear trend that won't change anytime soon, given the piles that you sent in.

"Spell creatures" surely is a fuzzy definition. I don't want to just staple Naturalize to a 2/2 deathtouch body. That's just efficient. I want ridiculous. I want my creatures to be ANY spell I want. That's the foundation of how my Melek, Izzet Paragon deck is built.

The creatures come in many groups. The returners are classic "spell creatures" that recur cards from my graveyard, like Archaeomancer and Charmbreaker Devils. Then there are the duplicators, such as Echo Mage and Djinn Illuminatus, that copy my spells to get more use out of them. Finally, Melek and Galvanoth turn my deck itself into an instant-and-sorcery-slinging-machine.

I run a Derevi, Empyrial Tactician deck built on getting the most out of an army of ETB staples. My personal favorite is Coiling Oracle, just because of the sheer versatility. Getting either a land or a draw for two mana is all well and good, but with Deadeye Navigator; Venser, the Sojourner; or good old "Roon Burgundy" (Roon of the Hidden Realm) out, I can do it at least once a turn, giving me reliable ramping and/or card advantage for a minimal investment.

1 Archon of the Triumvirate
60 Cards

1 Medomai the Ageless 1 Roon of the Hidden Realm 1 Venser, the Sojourner
99 Cards

Creatures that carry spells that let you use the spells over and over? I mean, don't twist my arm here.

We can also just go as big as we need to blow up everyone, as James does:

My favorite commander deck is my No Pain, No Gain deck, featuring Toshiro Umezawa. My favorite "spell creature" in the deck is Thought Gorger. Having grown tired of playing "safe" strategies, I designed the deck for maximum swinginess, no matter the cost. Thought Gorger is a beatstick that discourages killing it, and the downside is somewhat negated by Toshiro's fantastic ability. Disciple of Griselbrand is my second-favorite "spell creature" in the deck. This deck plays very riskily, paying lots of life for card draw (I have paid up to 20 life for Pain's Reward when I really REALLY needed a kill spell) and Disciple really helps offset the damage. Plus, getting rid of an unwanted Abyssal Persecutor or lethal Baleful Force is very helpful. Not to mention that saccing Thought Gorger to the Disciple is akin to an early Christmas.

While not as exciting or flashing, my most utilitarian "spell creature" would have to be Rune-Scarred Demon. Several of my win conditions require multiple parts to play successfully, and he is always there to lend a helping hand. Thanks to him, I have had many memorable victories with a combination of Sadistic Sacrament and Mirror of Fate, or Caged Sun and Nirkana Revenant, or Phthisis and an opponent's Serra Avatar. Although it isn't the most consistent deck I've made, and I kill myself as often as my opponents do, it's the most fun and creates the most memorable plays of any deck I have made to date.

James's No Pain, No Gain

As a fan of games that end with "Boom goes the dynamite!" it makes total sense the culmination of Demon shenanigans ends up with everybody biting the dust.

You can also be a little more selective in what "blowing everything up" means, like Stephen:

My favorite spell creature is a bit of a difficult question to answer. But I feel I can answer it nicely with a mono-green deck I'm working on.

It's a spiritcraft deck built around Kodama of the Center Tree. Plenty of the cards could be described as "spell creatures," but it plays a few that follow your definition. If my board isn't getting repeatedly crushed, I can often turn every Spirit cast into a potent spell creature with the spiritcraft triggers.

Bane of Progress is an all-star of the format, and the only mono-green card to destroy all artifacts and enchantments. With no spell to replace it, I guess it's my favorite spell creature. Carven Caryatid, Eidolon of Blossoms, and Haru-Onna have the three most powerful words in Magic written on them and stay to the theme. If Bane of Progress is green's nuke, Acidic Slime is the sniper. And what a beautifully crafted rifle it is.

Spiritcraft may not be at the top of your list of "Magic Mechanics That Create Impressive Value," but with the right creatures (there have been, and will be plenty more, Spirits made in the game) carrying the right spells, anything is possible.

Really, I mean anything. Zack even made the humble Spore Frog a force of multiplayer mayhem:

The first deck I think of when "spell creatures" are brought up is my Karador deck. Basically everything in the list has an ETB or dies trigger (or both!), making something like Birthing Pod a Swiss Army knife for all sorts of threats. But my *favorite* creatures?

Being a long-game-minded graveyard deck, I have to say that Spore Frog is the guy I want to see every game. That little Fog Frog does a great job of "ramping" into my commander, helps me play politics with protecting life totals later on (Gift of Immortality makes him an absolute nuisance), and is a bit of insurance against infinite-damage attacks (Prossh, Kiki-Jiki/Pestermite, that sort of thing).

Mikaeus, the Unhallowed is always a blast to resolve. Crafting the deck to have few non-Humans to get maximum value out of his undying ability feels very good, and he's a better Cauldron of Souls with Vish Kal, Blood Arbiter hanging around, as well (that's an infinite combo that I like having in my back pocket). Add in how great he makes the evoke creatures (Shriekmaw, I'm looking at you) and he just has the whole package.

One creature in my deck actually came in, replacing a spell with the same effect, because recurring the enters-the-battlefield trigger is more straightforward than recurring Eternal Witness or getting lucky off of Deadbridge Chant. I used to run Pull from Eternity to help protect against Bojuka Bog-style hate, but then found out about Riftsweeper in Modern Masters. When your opponents Path or Swords something like Ashen Rider, it is incredibly satisfying to drop it back in the graveyard to be cast again. This Grizzly Bears has earned its place in the deck many, many times over.

Zack's Karador and his Pillowfort