The Contrapositive of Physics

once had a physics professor who confidently differentiated between geniuses. "Sure," he'd say, "So and So is a genius ... but there are geniuses and there are geniuses. Like Einstein. Now there was a genius! And in all of human history there are only a handful on the order of Isaac Newton." 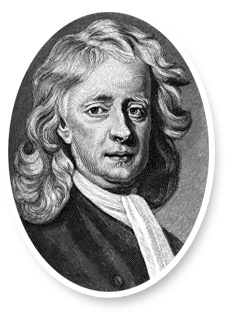 I probably don't have to tell you and sell you too much about Newton, who was arguably the most influential human being ever to live. For our purposes today, though, I just want to remind you of one of Newton's most famous quotes:

"If I have seen further it is by standing on the shoulders of giants."

Sir Isaac was saying that even a dwarf standing on the shoulders of a giant could see twice as far.

But ours is not universe of natural philosophy, physics, or science. Or even of humility.

We play—literally—in a world of Magic. Magic.

And in Magic—kind of like an enchanted capitalism—we don't have far-sighted dwarves riding atop giants so often as giants being birthed by the sweat and effort of many hard-working dwarves. That is, elves.

People talk about Scapeshift being a one-card combo ... but Scapeshift doesn't do much more than grow a Knight of the Reliquary unless you have a heck of a lot more than four lands on the battlefield. And how do you get those lands out there? It is the slavish faith of a Sakura-Tribe Elder hurling itself into the graveyard, of a Wood Elves ready to sacrifice itself with a chump block, that gets you to the requisite pre-Scapeshift land count.

And what about Tooth and Nail? Has there ever been a more comically pricey nine-mana sorcery ... that managed to completely dominate a Standard environment? People will chew your ear off with their Triskelions, Mephidross Vampires, double Darksteel Colossuses, even (rather, "eventually") Kiki-Jiki, Mirror Breaker combinations ... but the flashy finishers would never have found themselves on the battlefield without the efforts of a Snake Shaman, a quiet green sorcery or three, or—in especially early cases—Jens Thoren's Invitational card, Solemn Simulacrum.

Rise of the Eldrazi—now 100% “spoiled” in the product section—is a set of earth-shattering giants. Giants as big as the Darksteel artifacts that shook the ground post-Tooth and Nail. The biggest bigs are just so ... big. 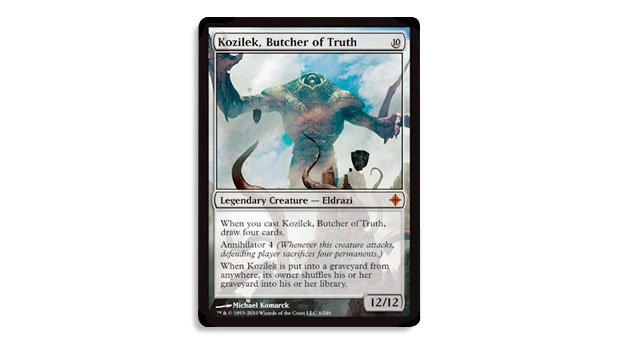 I would not have thought—having seen this, the first of the Eldrazi Big Bads—that Kozilek would be the baby.

Kozilek is "merely" an un-counterable Opportunity ... with annihilator 4 and, yes, a more expansive anti-reanimation clause. Oh, and the power-to-mana cost ratio of a Kodama of the North Tree. 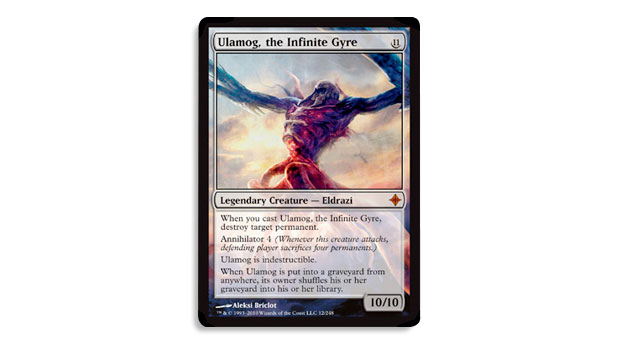 We have referenced Tooth and Nail and onetime Tooth and Nail poster robot Darksteel Colossus a couple of times already in this article. Ulamog is like a Darksteel Colossus and so much more. You lose a point of power (and toughness), but as a trade-off you get to Vindicate on the way down (again, un-counterable). You lose trample, but annihilator 4 makes up a lot (I mean, who is going to be left to block?). And 10 + 10 = 20, so I don't know how much different the clock will be on Ulamog versus Darksteel Colossus over two attacks ... but Ulamog's annihilator 4 is just so ravaging, death might feel preferable to abject humiliation for some opponents.

It may be obvious by this point, but I am really jones-ing to try the legendary Eldrazi with Tooth and Nail mana engines. They might not be at 100% force when coming down as a direct result of Tooth and Nail, but it won't be hard to get them down regular-like, and even without Opportunity, Vindicate, or Time Walk, these creatures are so big and so resistant to injury that they will probably out-perform a regular creature with just power and toughness (no matter how big), many times over. 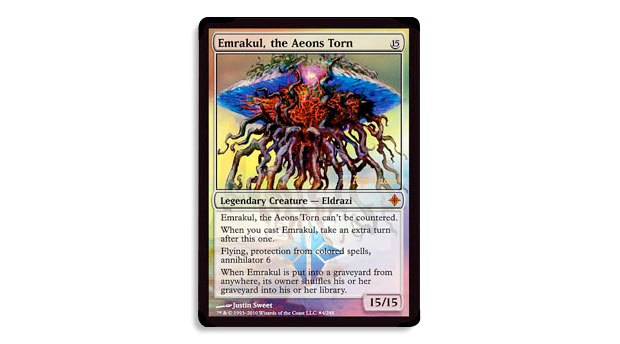 Promo version of Emrakul, the Aeons Torn, available at Rise of the Eldrazi prereleases everywhere (While supplies last). Find a prerelease near you

I was originally mostly thinking about this particular legendary Eldrazi in gimmick decks, but it is becoming increasingly clear that you might just cast it—and all of them. I mean, think about it. We have decks whose plan is to lock down our colors with Iona, Shield of Emeria. Um .... That doesn't work against the Eldrazi. Counterspells work only sort-of, and against Emrakul not at all (and if you cast them in the early turns, you might just get bitten by a Summoning Trap). Instead, we may really see battlefields where 10/10s lock gazes with 11/11s rather than (just) the more familiar 3/2s foolishly rushing into 2/2s.

We just have to make sure we can get there. 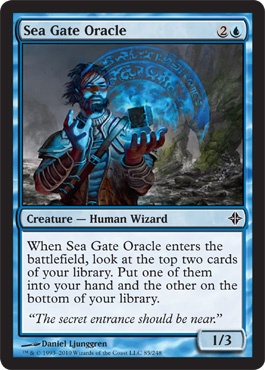 Sea Gate Oracle is a card much reminiscent of many two or three mana search / card drawing creatures that have been used in the past to quote "get there."

At its most obvious level, Sea Gate Oracle can go either way. You can go and look for the Kozilek, Butcher of Truth if you have enough land... and if you don't, you dig for the lands. Sea Gate Oracle in your opening grip, for example, can give you a strong incentive to keep a two-land hand that has also got a double-digit mana cost fatty fatty boom boom. 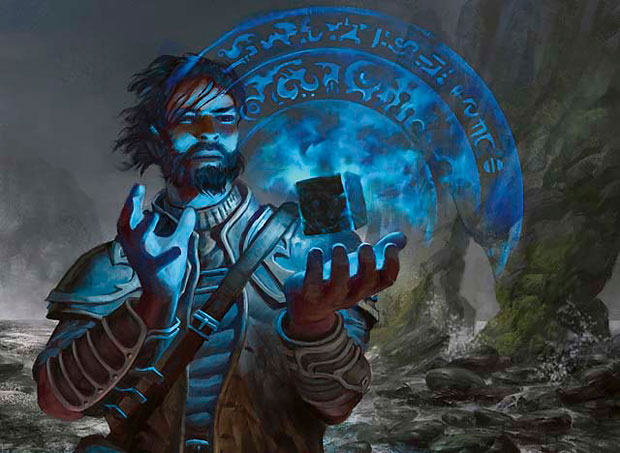 Sea Gate Oracle is a great "get there" card, because even as it helps you perfect your draw, it can keep the heat off. Wood Elves has won many a tournament, but as a 1/1, it was usually good for one chump-block only. Sea Gate Oracle, with its three toughness, can hold a 2/2 off indefinitely, or put the legitimate fear of Baneslayer Angel into the hearts of any and all 2/1 two-drops or Goblin / Saproling tokens on the other side of the table. Because what is the point of lacing together fifteen consecutive land drops and one huge, monolithic, table-warping, and time-bending threat ... if you don't live long enough to cast it? 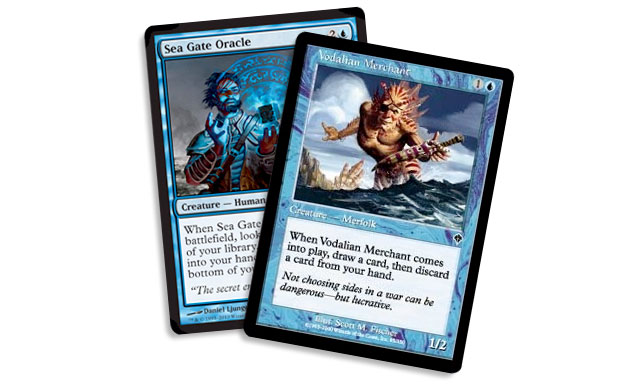 The cards are not dissimilar; we have two blue 1-power creatures that dig two deep in our decks. For one mana more, Sea Gate Oracle is bigger and offers better card selection (plus, you actually get to keep an extra card!) ... but Vodalian Merchant is quite playable. Here's a Day 2 deck that proves it:

Darwin's deck was also trying to "get there." Remember, the winner of this Pro Tour was Kai Budde with a nearly mono-white Rebels deck. Digging to Crypt Angel and especially Marauding Knight after sideboarding would give Darwin a strong advantage against white decks. While a little bit more expensive, Sea Gate Oracle will give you an even more consistent handle on your library.

More Ways to Get There

While these cards don't block, they seem like very powerful options to search ... and eventually destroy! 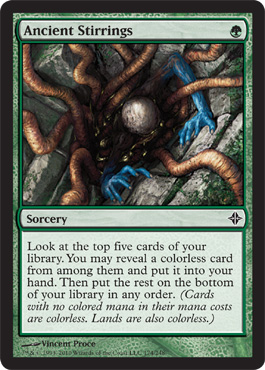 I used to say that Impulse was the best card in Magic.

Impulse would improve a control deck's ability to find Wrath of God. On turn two it would help set up a blue deck for turn six. They could confidently tap out for Mahamoti Djinn, knowing Force of Will was waiting to defend. Even burn decks would sometimes play Impulse... to find Fireblast or proto-Bloodbraid Elf four-drop Talruum Minotaur—seriously! Ask (former pro and current Magic Online bigwig) Worth Wollpert.

But the reason Impulse was so special was that it could help a player hit his land drops. This card was so good Hall of Famer Alan Comer would cut down to about 17 lands in a blue deck, confident that his Impulses would help him hit his drops!

Now Ancient Stirrings might not give you the ability to find a cheap counterspell (necessarily ... I guess it depends on your personal definitions of these things), but an awesome sweeper? All Is Dust! A burn card? Not in Standard .... but how about an Everflowing Chalice, right on schedule:

Going long, this one mana spell will get you any of your huge legendary Eldrazi.

And lest you think of Ancient Stirrings as only a gatherer of artifacts and Eldrazi, don't forget that you can go and grab your Eldrazi Temple with it.

For one mana? Absurd!

Speaking of getting your Eldrazi Temple, what about Realms Uncharted? 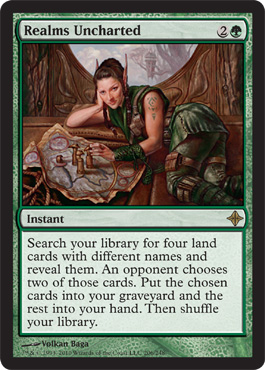 Billed as the "Gifts Ungiven" for lands, Realms Uncharted can set you up with a powerful two-for-one (while ensuring your next two land drops) every time. Want a creature land? Try this package: 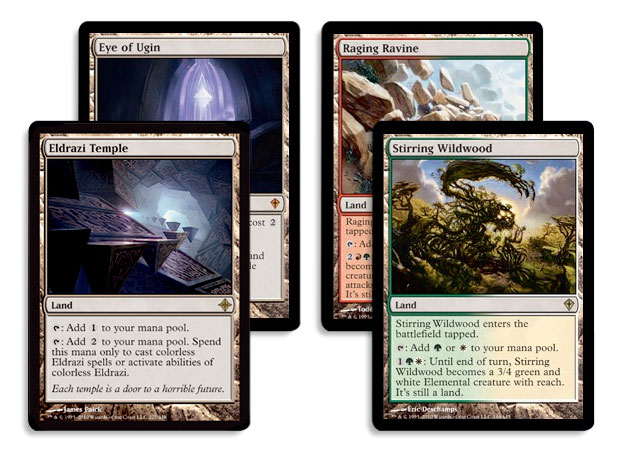 You are going to end up with the creature lands, almost every time. There are worse recipes for three mana.

The realms really are uncharted this time around. While we've had Darksteel Colossus and Draco in the past, never have we really and truly planned on casting them. Flipping them over with an Erratic Explosion? Yes; actually playing them fair and square (if "fair" is even an appropriate word) and dominating the paint? That's something else entirely. I for one can't wait to attack with a creature with a hefty annihilator count. 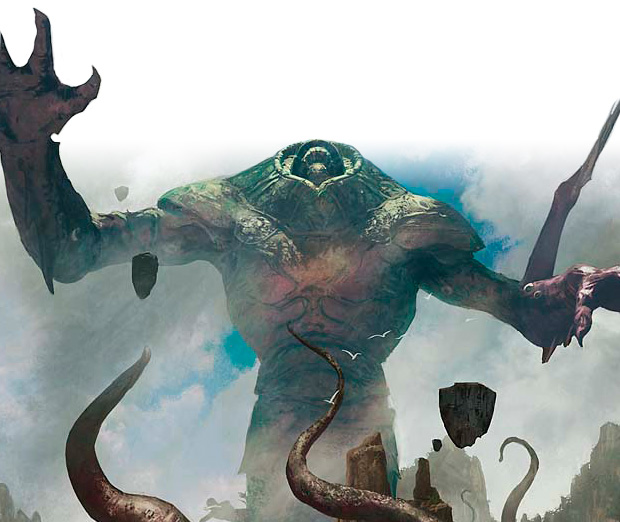 Come get some, Sprouting Thrinax!