ro Tour Kyoto begins tomorrow. It features the first of this year's Pro Tours in a new format: half Standard, half Draft. In the past players prepared for just one format, so this tournament is more like a National Championships in the way it tests players across formats.

The Standard format will be receiving a shot in the arm named Conflux; this Pro Tour will be the first big event with Conflux in the mix... So how will players incorporate the new cards in this otherwise well-known format?

Following are some decks from recent tournaments that might illustrate how Kyoto's Pros are going to put their decks together. I would guess that the most popular decks will be Faeries, Reveillark variants, and Blightning Beatdown, followed by Reflecting Pool Control and Kithkin. Reflecting Pool Control in particular seems like a deck that has lost a good portion of its vocal support, despite being perhaps the second most popular deck previously, but also the kind of deck with lots of options and prodigious card power that attracts many Pros.

A deck with essentially the opposite description is the Boat Brew. This is a deck that started with essentially no adherents, but has steadily gained support to the point that it is considered, at least by some, as the deck that beats all the decks but Faeries... But will typically lose to Faeries (at least the ones with Sower of Temptation).

As you may know from previous articles and videos like these, the Boat Brew is a R/W mid-range creature control deck that plays a slew of excellent cards, most notably Ajani Vengeant and Windbrisk Heights. The deck has two synergistic creature-based card advantage engines. One is Ranger of Eos, which can get Figure of Destiny, Mogg Fanatic, Burrenton Forge-Tender and, in some versions Flamekin Harbinger, which itself can set up the other engine... Reveillark.

Reveillark in this deck looks quite impressive when hooking up with Siege-Gang Commander, but pretty good with more or less anything. While playing a Reveillark straight can be a liability against Sower of Temptation, the constant repetition of cards hitting the table -- topped by Reveillark after a series of exchanges on the ground -- makes for a difficult defense to breach for most aggressive strategies. While Siege-Gang Commander is the most obviously powerful card to replay, any kind of two-for-one or three-for-one action will buy the deck precious time as it accumulates value with Ajani Vengeant. 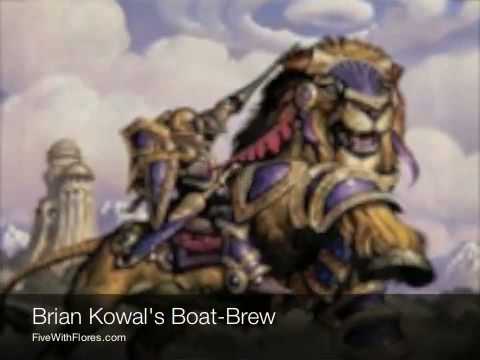 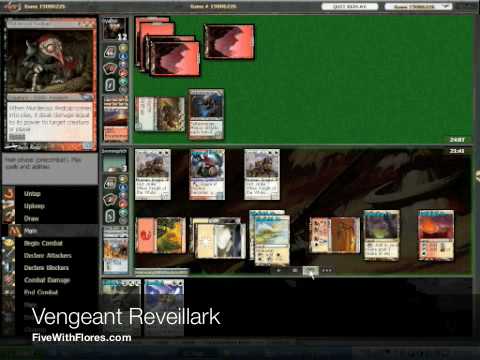 These videos are pre-Conflux games from the origin of the Boat Brew and Osyp Lebedowicz's Top 8 at the Star City Games $5000 in Philadelphia, respectively. Both videos feature Knight of the White Orchid card advantage; just think how much easier it would all be with Path to Exile! 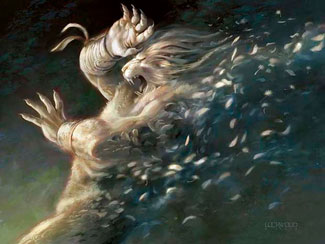 Path to Exile -- besides just being a very good card -- has one more special synergy in a deck like the Boat Brew: It is (or at least "can be") an effective defensive weapon against the most problematic cards from the toughest matchup, that is Mistbind Clique (the deck has historically really hated a Clique in Game 1) and Sower of Temptation (particularly against a five mana Reveillark). In addition to improving the efficacy of Knight of the White Orchid, the ability to interact with especially the 4/4 four drop makes quite a big difference for team Vengeant Reveillark.

For a different look at Reveillark, check out Dave Irvine's Star City Games Richmond, VA $5000 winner from this past weekend.

Dave's deck is a super synergistic creature deck based on having every kind of game breaking 2/x creature in Standard alongside Reveillark. Disruption in Tidehollow Sculler, card advantage from Mulldrifter, board domination in Sower of Temptation and Stillmoon Cavalier; Esper Charm and Makesfhift Mannequin to lace them all together.

The key to the creature mix in the Esper-based Reveillark deck is that all the cards start off very good. Tidehollow Sculler is Extended quality. Mulldrifter is the defining (non-Faerie) blue creature of the past two years. Stillmoon Cavalier is a superb offensive weapon against both opposite ends of the metagame, unstoppable by Kithkin and only narrowly so by Faeries. Each of these creatures matters in and of itself. So when combined with Reveillark recursion, the value of the system is that much better.

Glen Elendra Archmage is a superb creature that has been putting a stamp on Extended due to its synergy with Riptide Laboratory and overall capacity to quiet combo decks and burn spells; in Standard it is a creature that can completely shut down Reflecting Pool Control all by itself; as with the rest of the creatures in this deck, the Archmage is also eligible for Reveillark Recursion... Unless it fell victim to say a Path to Exile (like Saito's deck, Dave's has found room).

Most notably, Irvine's deck can shrug off an opposing Archmage more-or-less because his key spells -- creatures -- are largely ineligible for Archmage interaction.

Ken Adams has produced some of the more interesting and in some cases influential decks of the last few years, most notably Solar Pox (an innovation of the then-popular Solar Flare archetype). This time Ken has taken a spin with archetype deck Blightning Beatdown.

This version has shifted away from cards like Bitterblossom and Demigod of Revenge (which has moved to the sideboard) or any kind of Siege-Gang Commanders (which we saw in the World Championships Top 8 version) to be more haste and burn oriented.

The deck plays a boatload of new creatures, including Hellspark Elemental (which is a burn spell masquerading as a haste creature), and Shambling Remains, which has replaced Ashenmoor Gouger and/or Hell's Thunder. The first time out the Remains is basically a Hell's Thunder (albeit in Lash Out range) and the second time around it is like Hell's Thunder Lite (at a steep discount in cost). The most interesting new creature Adams played in this mix, though, is Goblin Outlander, the artist formerly known as Shivan Zombie.

Goblin Outlander is yet another card that can help untap Auntie's Hovel on the first turn, but in the context of an overall metagame, it is so much more than a black-red Grizzly Bears. The worst matchup for decks like Blightning Beatdown is Kithkin, and running a close second comes the Ajani Vengeant-packing, White Orchid traffic jam of the Boat Brew, especially with Reveillark bringing back so many annoying little blockers as the counters accumulate on the local Planeswalker. But Goblin Outlander can keep swinging in for two, ripping away small chunks of life instead of being held off by first strike or protection from red (damn any and all main deck Forge-Tenders) until the Blightning Beatdown deck can close it with burn spells.

Another notable addition for this deck is Volcanic Fallout, main deck and in the sideboard. Blightning Beatdown doesn't rely on creatures for long term damage, necessarily, so the down side of this spell might not be significant (plus many of its threats will be three or more toughness), whereas the dominant Faeries deck is full of little creatures, and relies on permission to keep those little creatures alive. It ends up a bit like a Sudden Shock as a two point burn spell that will "always" resolve.

Woltereck continued his success at these $5000 events with another Top 8 appearance, if not an out-and-out win. His trusty Reflecting Pool Control deck was this time based on the most successful version from the World Championship's Standard Swiss portion.

Chris included a couple of new cards -- Path to Exile, Volcanic Fallout, and Banefire -- but that's not what I find to be interesting. It's instead a singleton in the sideboard: Wild Ricochet.

While the card has a number of productive interactions (first appearing in Hollywood-era burn sideboards and peppered in the PTQ deck lists from last summer), in a deck like Reflecting Pool Control I feel like it is most interesting as an answer to Cruel Ultimatum. Wild Ricochet basically counters Cruel Ultimatum, and at a significant enough life margin might win the game on the spot. It does so in a way that isn't really subject to the corner case methods that many Reflecting Pool Control players use to get their Ultimatums to stick (Vexing Shusher, Gutteral Response, and so on). When you get to move around an opposing Banefire, that's just insane gravy. You probably just won.

One card you might be on the lookout for this weekend? Runed Halo.

...Not without Wild Ricochet, anyway.

And then there's the bad guy:

This is Jonathan Sukenik's finalist deck from the same Star City Games $5000 tournament this weekend past. He lost to Dave Irvine in the finals, but Faeries should still be the odds-on favorite and most popular deck for half of this weekend's action.

There aren't any new cards in the boogeyman's deck list, but it's like Patrick Chapin recently asked us... How many decks are going to be able to out-pace first turn Thoughtseize, second turn awesome blossom, third turn Jace Beleren, then an upkeep Mistbind Clique? We are looking at best of breed on turns one, two, and four, and a card that a lot of decks can't beat at all on three (even if others can ignore a Planeswalker).

This weekend will be interesting to watch. I really look forward to the new breed of Blightning decks, but don't be surprised with at least one set of Spellstutter Sprites in the Top 8, new cards or no.