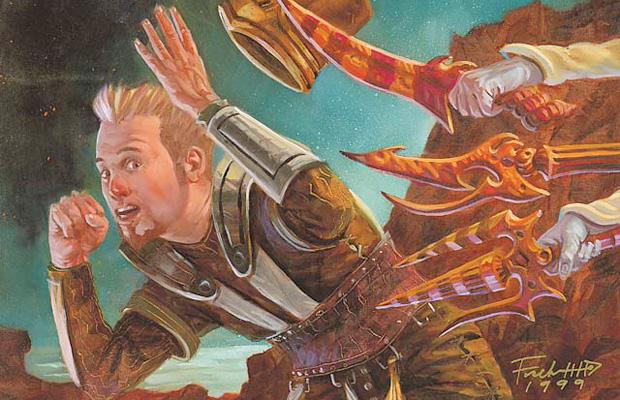 I don't mean cowardice, the concept itself or the whole "Cowards can't block Warriors." shtick of Boldwyr Intimidator. I mean Cowardice, the blue enchantment originally from Mercadian Masques last seen as a reprint in Ninth Edition some eight years ago.

Cowardice is an enchantment I really enjoy in Commander.

Cowardice is a flexible enchantment. It can do a lot for a deck built around it:

But there's another angle to Cowardice that I like: Its effect on opponents. Most decks aren't designed with Cowardice in mind.

Cowardice creates some randomness in games and helps break up some powerful combinations and Equipment. It rides the line of pseudo-removal for blue without breaking other players' creatures.

That's its own downfall. Sometimes, you really want something stronger, that can tilt the entire game in your favor. Magic 2014 is about to update Cowardice in a big way. Meet Dismiss into Dream: 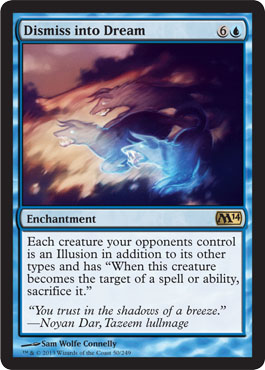 Dismiss into Dream isn't Cowardice. All of the build-around-me upside contained in the old enchantment isn't here. In fact, since it doesn't apply at all to our own creatures the comparison of Cowardice may seem out of place.

It's the effect on opponents' decks that matters.

Dismiss into Dream turns off opponents' Equipment and Aura in an even more severe way. It turns spells that aren't even removal into single-target removal spells. It turns even simple effects into deadly force. It even turns the entire table against you.

In short, it's powerful in obvious ways that give blue indirect access to something it rarely has: a surefire way to kill a creature. All it takes is a little targeting.

Take, for example, the humble and ancient Fylamarid. It's from Tempest, a set most of you have never seen. It's also a strange creature that doesn't find many practical uses today. Its ability to make creatures blue is cute since it can't be blocked by blue creatures. But combining its activated ability with Dismiss into Dream turns the humble Squid Beast into the visage of death itself. 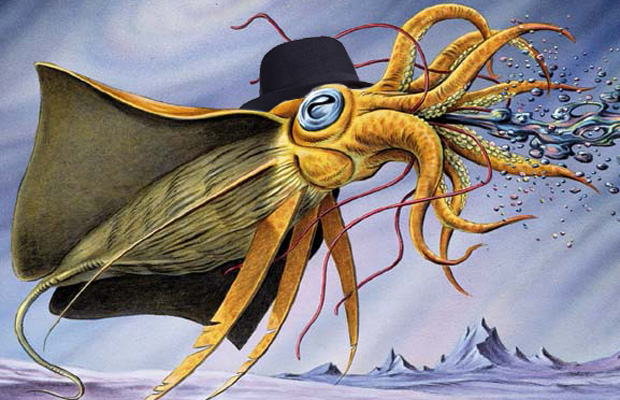 I'm going to make you a color you can't refuse.

While I have a hard time envisioning Fylamarid (or Indigo Faerie, for a modern twist) fitting into a Commander deck (that was not a challenge!), there are plenty of cards that can be activated repeatedly but could find a home on their own:

And that's all just blue-based options. When you throw in all of the other colors, artifacts, and lands, the destructive synergy with targeting gets even easier. (You can even get a little fancy with things that care about creatures types since Dismiss into Dream also makes our opponents' creatures Illusions.)

Dismiss into Dream isn't a clever card filled with hidden uses. It does exactly what it looks like, and rare will be the player unconcerned that his or her team is now apt to disappear in a moment's targeting. Dismiss into Dream is loud and built for a clear purpose.

So why is this card for Commander?

Let's ignore the "obvious" of mana cost. I'm not a believer in the idea that cards useful (or made particularly for) Commander are inherently more expensive. In fact, most of my favorite cards for the format either have no mana cost (lands!) or are cheap, flexible cards that quietly do work throughout a game (Treasure Trove, Oversold Cemetery). How much Dismiss into Dream costs isn't dependent on being "for Commander" or not. (At least, as a player, I don't speak for Magic development!)

Dismiss into Dream is a Commander card because it fills a unique role, and does it in a flavorfully elegant way. Let's look again:

But it's still a great card to use.

While the finer points of multiplayer are lost on Dismiss into Dream in Commander, what it does provide is a tool that some commanders will thrive on. Niv-Mizzet, Dracogenius isn't what I have in mind.

Blind Seer and Barrin, Master Wizard aren't the splashiest of commander picks. Barrin ostensibly has some use in sacrificing things as well as saving creatures, but adding in the ability to trade one-for-one with opponents' creatures isn't shabby. Blind Seer takes some serious work to stand out as a leader, but the color-changing ability is another machine gun with Dismiss into Dream.

Gwafa Hazid, Profiteer is a fun commander to work with. The political power of giving out card draws or Pacifism is a potent tool that doesn't immediately make enemies with the table. What Dismiss into Dream does is transform his card-cum-Pacifism into straight-up destruction: Since the card drawing is part of the resolution of his ability, Dismiss into Dream's sacrifice effect will have resolved first and the creature Gwafa was targeting is gone and the ability will fizzle, including the part that draws a card. How's that's for a profit?

If you're into new cards, then you've probably seen Vorel of the Hull Clade. His ability screams for cards like Darksteel Reactor and Fathom Mage, but it's an ability that's rarely powerful against opponents. Dismiss into Dream adds a new dimension to Vorel, allowing his ability to not only add to a stock pile of counts on most permanents but also snipe away a creature if needed.

(Astute readers will notice that Colossal Whale also doesn't have an active link. That's because you'll have to check out the Magic 2014 Card Image Gallery to see all the latest cards!)

This is a sample Vorel deck I found searching online and tweaked to add some Magic 2014 love. Dismiss into Dream doesn't change the goal of the deck, but it does round out a clever way to add removal to an otherwise light-on-stuff-against-opponents setup. 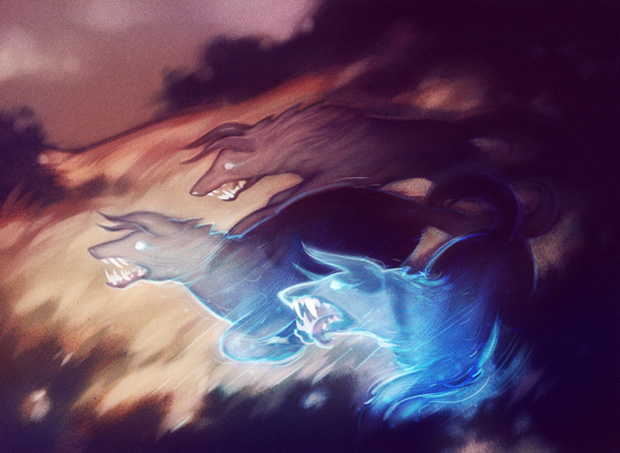 There is one downside to Dismiss into Dream, but it can be a big one if you forget about it in the heat of the game: You can't target your opponents' things anymore. While normally you'd be fine just forcing your opponent to sacrifice awesome things, you also remove the possibility to kick a Rite of Replication on an opponent's Solemn Simulacrum, or maximize the power of Memnarch.

Pointing this out won't save you, politically (it might actually make your enemies angrier!), but it is something to keep in mind if you choose to dismiss your opponents' creatures into their dreams. Speaking of dreams, it's in the Magic 2014 Card Image Gallery that you'll find a few new toys to tool around with in Commander. I want to know what they are. Which card or two from Magic 2014 are you most excited to use in Commander, and why?

Remember that you can check back Monday, Tuesday, and even Wednesday next week to find even more cards to consider for your next hundred-tall adventure!

Join us next week when your previous adventures take center stage. See you then!