The Decks of Gods 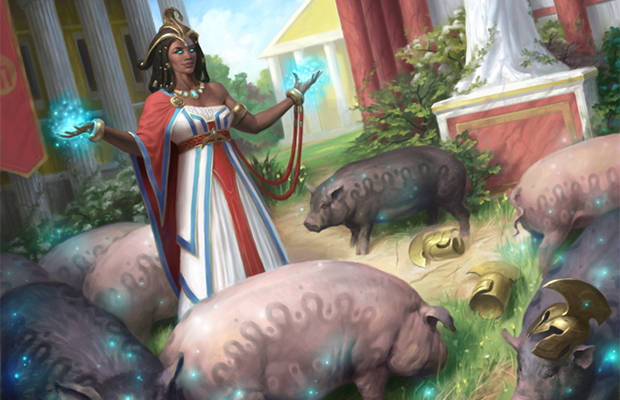 Curse of the Swine | Art by James Ryman

The release of new sets is one of the most exciting moments to be a Magic player. Heads are filled with dreams of Xenagos, the Reveler alongside Wort, Boggart Auntie, or what Nykthos, Shrine to Nyx can do in a monocolored deck. The new tools that will fill decks, like Curse of the Swine as great blue removal, are easy to discuss simply because they never existed before.

In fact, I could spend an entire article just pointing out the new cards I love most, and why:

Listing sweet cards isn't as exciting as playing Magic, however, particularly in Commander. 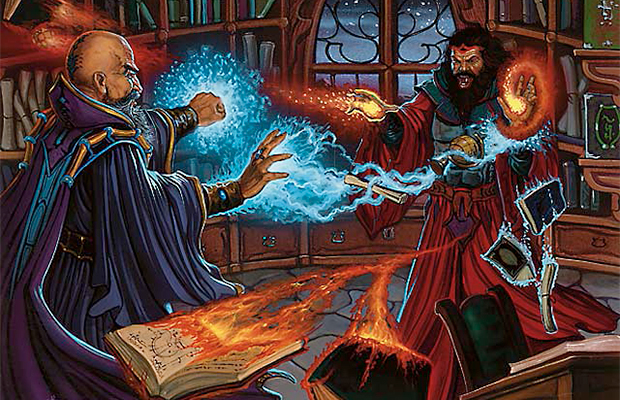 Within the trove of all things new there are always new standouts among the legendary in the set. These new commanders are where many Commander players start their journey. While you may be a grizzled veteran of multiplayer and Commander like me, it's clear from the feedback the rest of you share that newer sets are precisely where Commander begins.

Those new legendary creatures are the shining points of Commander in Theros. We've already looked at a few but there were plenty more to show off. Fortunately, you were up for the challenge.

While my love for Erebos, God of the Dead is an easy sell, it isn't alone in Theros's pantheon of overlords. Each God represents different attributes of Magic, as gods are apt to do, and playing with the different themes is one of the ways new commanders are most exciting.

It is any surprise then that Andrew shared this Thassa, God of the Sea deck?

Andrew's Thassa, God of the Sea

Rather than make the best use of Thassa to win the game, I opted to make the most flavorful sea god deck I could. I obviously included all the new Theros cards related to Thassa herself, such as Bident of Thassa and Thassa's Emissary. From there, I let Shipbreaker Kraken lead the way for the rest of the sea monster ensemble. A handful of Merfolk and a little tribal support for them came next, as they are the wardens of the seas after all. I included a diversity of sea critters like Spiny Starfish and Giant Oyster to showcase Magic's diversity of aquatic life. Note that many of the creatures have islandwalk, so I included a suite of cards to make my opponents' lands into Islands. Finally, the rest of the spells in the deck are representative to oceanic forces that Thassa would control.

I sea your theme, Andrew, and raise you the tides of time: you aren't the first to craft a deep-sea-themed Commander deck. It's worth noting that Thassa and her handy Bident make a card-drawing combo, and the new Nykthos, Shrine to Nyx shines in a deck packing Lorthos, the Tidemaker. Just because it's all about the sea doesn't mean you'll be left out to dry in multiplayer.

But when I looked at the choices of Gods for Commander it wasn't Thassa, God of the Sea who stood out: Purphoros, God of the Forge is someone many of you latched onto too.

I think Purphoros, God of the Forge is fantastic. Here's what I think:

I want to make Purphoros deal massive amounts of damage, and the best way to do that is with cards that double damage. Additionally, anything that generates creatures regularly is going to make him powerful. Since I'm in red, I have to either rush past everyone or I have to play land control (no fun). So, here's my list. It's not perfect, but I think it'll get the job done.

Nick's Purphoros, God of the Forge

1 Chandra, Pyromaster 1 Chandra, the Firebrand 1 Koth of the Hammer

1 Chancellor of the Forge
63 Cards

1 Valakut, the Molten Pinnacle 1 Bonfire of the Damned 1 Gauntlet of Power 1 Wheel of Fate 1 Wheel of Fortune 1 Chandra, Pyromaster 1 Chandra, the Firebrand 1 Koth of the Hammer
99 Cards

Here's the theory. Get out Norin the Wary and the game is pretty much over. Get it out with a few cards that have enters the battlefield effects, like Genesis Chamber, and our God starts dealing 4 each player's turn. Or Furnace of Rath. Or any number of other great things you can do with the deck. Enjoy!

Burn decks—decks that pack every version of Lightning Bolt and Lightning Strike they can—are a classic archetype in Magic. Nick's take on Purphoros isn't quite a burn deck but it works similarly, thanks to the God of the Forge's triggered ability. That little bit of text is something that led most of the submissions that came in to be Purphoros-based. There's just something about watching the world burn that plenty of you are on board with.

So I built this Purphoros, God of the Forge deck initially with lots of tokens in mind. Then I hit upon some other things that worked well. Evoke is a great way to shock all your opponents and get a nice effect on top of it. Kiki-Jiki, Mirror Breaker also works well with having lots of enters the battlefield abilities on creatures, and it triggers Purphoros. Petradon and Petravark copies made with Kiki-Jiki can bounce your Mountains to trigger Valakut, the Molten Pinnacle as well. Lots of Snow-Covered Mountains allow you to bounce Stalking Yeti as well. Pandemonium and Warstorm Surge add to the "enters the battlefield" fun. Fanatic of Mogis takes advantage of devotion, and Stormbreath Dragon does a good job at hitting everyone.

Raymond's Purphoros, God of the Forge


When I considered forging my own deck around Purphoros, this is almost exactly what I had in mind:

Raymond's plan was a common thread across the dozen or so Purphoros decks, and I'm excited to hear so many of you will be making monocolored Commander happen. (Generally speaking, I'm also a fan of Commander decks that make life totals go boom. Purphoros, God of the Forge delivers here, too.)

Of course, not every Commander deck that goes after life totals is based around aggressive red and black cards. You can also dig into blue and white to strike, as Geoff shared:

Daxos of Meletis is one of the most interesting legendary creatures from Theros. This deck focuses around Daxos's first ability of not being able to be blocked by creatures with power with 3 or greater. This allows Daxos to swing under the defenses of most Commander decks, as they tend to focus on large late-game creatures and commanders.

The second ability, while nice, isn't as important. The theme of this deck is to swing early, swing hard, and do lots of commander damage. As a result, this deck focuses on the exalted mechanic, Equipment, and Auras: exalted to make Daxos large enough to stomp anything small that gets in the way, and Auras and Equipment to pump Daxos, and apply abilities, particularly "can't be blocked." Who doesn't like unblockable commander damage, and with Aqueous Form it only costs

For Daxos, I like the Ordeal of Heliod and Thassa because they provide a small permanent boost with +1/+1 counters plus a nifty effect that rewards you for swinging away. Another great Aura is Gift of Immortality. While not extra damage, it does allow Daxos to survive longer by making removal half as effective.


When I think of white-blue Commander decks, I think about "flickering" effects that make the most of whatever valuable creatures are hanging around. But in Limited, it's all about "White-Blue Skies"-type aggressive decks that slip past defenses and out-tempo opponents.

Geoff's deck is the Commander equivalent of the Limited version of white-blue, pushing an evasive creature across the battlefield to cut down any enemies. Suiting up Daxos of Meletis makes all the sense in the world.

What else is possible with the latest commanders available in Theros? It's an exercise I'll leave up to you, but just remember to keep other players in mind as you assemble your next contraption.

And we won't be settled out of legendary options anytime soon, as we're already gearing up for another Commander-packed release: Magic: The Gathering Commander (2013 Edition) is right around the corner. While we're still a couple weeks away from previews, I'd like to get the conversation started now: How, or why, do you attack with your commander?

Do you suit up your champion in the finest Equipment and Auras available? Do you use a commander with a special ability just for attacking? Do you throw your commander into the fray unfettered, and leave others to decide whether to deal with it or not? If you use your commander on offense I'd like to know how you pull it off.

Join us next week when I share what you shared so we learn what you've learned. See you then!